In 1939, Frederick McKinley Jones patented the world’s first successful refrigerated transportation system. Two years later, the Minnesota resident released an improved version which revolutionized the agriculture and military industries. Jones patented more than 60 inventions over his 67-year lifetime, making him one of the most prolific Black inventors ever.

Gabriel Guy, 6, zips into first place during the first cardboard sled race at West Hills on Saturday. The races were a part of the Owatonna Parks and Recreation Winter Weekend Out in conjunction with the annual Bold & Cold winter festival. (Annie Granlund/southernminn.com)

Alicia Vielma, 8, proudly shows off her Mystery Machine-inspired cardboard sled. Vielma said the design was her mother’s idea and that it took “a long time” to complete the sled before Saturday’s race. (Annie Granlund/southernminn.com)

Two groups of racers and homemade sled-makers gathered atop the sledding hill on the West Hills campus Saturday morning to see which sled was the fastest and which were the most spectacular in design. (Annie Granlund/southernminn.com)

The wind may have been bitterly cold, but the laughter that rang throughout the West Hills campus on Saturday morning was more than enough to keep hearts warm.

As a part of the annual Bold & Cold winter festival, the Owatonna Parks and Recreation department hosted the first cardboard sled race, inviting kids to put their engineering creativity to the test and race down the most popular sledding hill in town. Calling on the popular cardboard boat race that usually takes place during the summer weekend out at River Springs Water Park, racers were able to use cardboard, tape and as much luck as they could muster in an attempt to claim victory during one of two races.

Originally open for two ages groups, the city Parks and Rec staff had to narrow down to ages 10 and younger due to a lack of registration in the older class. Regardless, there was ample interest amongst the younger racers, putting the hill to good use.

As the first race came to an end, 6-year-old Gabriel Guy leapt from his sled to celebrate zooming into first place. According to Guy’s mother, preparing for the sled race was a family affair that kept Guy excited throughout the week. Just minutes before the family packed up to head to the races, Guy was still coloring his sled.

Eight-year-old Alicia Vielma said her family also worked together to build their sleds. Come race day, Vielma sat comfortable in her cardboard sled that was a perfect miniature model of the famous Mystery Machine from Scooby-Doo.

“It took a long time,” Vielma said as she showed off the bright green and blue tape covering the cardboard. “It was all my mom’s idea, but I really like it.”

Each race gave out prizes for both the winners and the “most spectacular” sleds, which included a checkered tank, a unicorn and a dragon. Jessica Abrahams with the Parks and Rec Department said the races will definitely be returning next winter.

“I was so impressed with their sleds and how creative they were,” Abrahams said. “It was great to see the kids have fun, get outdoors in the winter and be creative. I’m glad we were able to offer an activity which combined art and being creative with a fun, outdoor activity.”

A picture of the mural as it currently hangs inside the restaurant. (Photo courtesy of Kellen Hinrichsen/Steele County Historical Society)

Steele County Historical Society’s History Center is set to be the new home to an iconic piece of Owatonna art.

After 50 years of hanging in the dining room of Jerry’s Supper Club, a large mural depicting Owatonna’s past will be relocated to the history center.

The mural will be hung above the history center’s atrium, allowing visitors to once again admire the large historical piece. Signs explaining the mural’s content and history will also be on display.

The 6-foot-by-21-foot mural was a pillar during the eating establishment’s lifetime, beginning in the restaurant’s opening in 1960 until its closing in 2009, according to Kellen Hinrichsen, history center executive director.

“It was painted as a depiction of downtown Owatonna around the turn of the 20th century,” Hinrichsen said.

However, the painting isn’t completely historically accurate in its depiction. Hinrichsen points out that not every element or building in the mural would have existed at the same time, for example some of the businesses would not have been there at the same time as others. Instead the mural characterizes a general idea of what the downtown area would have looked like in the early 1900s.

A few weeks ago, the history center was approached with the mural donation as Jerry’s Supper Club is currently under renovation. Working on an extremely tight schedule, and with an approaching building ownership transfer, Hinrichsen and others have been scurrying to get the preservation project going. They hope to get the mural up at the center by the end of February, and are requesting the public’s help with fundraising to make the transfer possible.

Hinrichsen says the center is happy to take the mural, a historical significant piece of art to the residents of Steele County.

“When we first shared pictures (of the mural) when I visited Jerry’s on our Facebook page, the outpouring of public support was just unexpected,” Hinrichsen said.

People began flooding the comment section with stories and memories from their visits to the restaurant. According to these stories, Jerry’s was the place to go, whether it was to celebrate a birthday, anniversary or family reunion. Some recall family members working there, while others talked about the restaurant’s great food. Regardless of the types of memories, the eatery was an iconic spot in Steele County, Hinrichsen said.

The positive memories were accompanied with donations as the history center surpassed its original donation goal of $4,000 within 42 hours of posting its GoFundMe campaign.

Donations will help fund the mural’s transition safely from the restaurant to the history center. Funds will also go toward installing lighting and interpretive signs and ensuring the mural is hung safely. Recently the history center has extended its fundraiser with a goal of $18,000, as bids for the project have come in higher than originally anticipated.

The society explained the increase on their Facebook page:

“Initially, money was thought to be available to handle the removal of the mural and its transport to the History Center, but this has not panned out. On top of that, the costs of removing the mural have increased as the wall has been found to be load bearing and needs to be reinforced. Lastly, the original bid for the hanging of the mural did not take certain structural concerns into account and now has to be hung from the ceiling in order to handle the mural’s weight, further increasing the cost.”

Hinrichsen further explained that the idea to donate the mural occurred in mid-January and thus the center would have to figure out the funding and project planning fast.

“It all came about very quickly. It was unexpected but welcomed,” Hinrichsen said.

As of Monday afternoon, the GoFundMe has raised $7,140 from 101 people in just six days, according to the campaign’s page. Hinrichsen said he believes the mural’s addition will be beneficial to the community and the history center. He is looking forward to seeing it displayed in the center and seeing continued support from the community. The mural preservation project is just one of the exciting upgrades the center will be making this year.

If you are interested in donating to the project, visit the Historical Society’s GoFundMe page at tinyurl.com/3q4yo8j3.

A view of the Foundation room from the activities entrance. There is an movable wall inside the room. The room includes significant visibility to the hallway and to outside. (Photo courtesy of Owatonna Public Schools)

The Owatonna School Board accepted donations in excess of $310,000 on Monday, with a large portion going toward the new high school building.

The ISD 761 Foundation and Owatonna Foundation have partnered to announce their intent to donate $500,000 to construct a large community room within the new high school. Each foundation pledged a donation of $250,000. At the Jan. 25 school board meeting, the board approved the first installment of $150,000 from the Owatonna Foundation.

The community room will offer a 2,400 square foot meeting space located near the new high school’s activities entrance with additional access to the outdoor courtyard adjacent to the stadium, according to an announcement. The room will allow for community gatherings, parent nights, award ceremonies and banquets among other events. Students and staff can use the space for larger class presentations. The space’s flexibility and movable wall can lead to more collaboration opportunities. 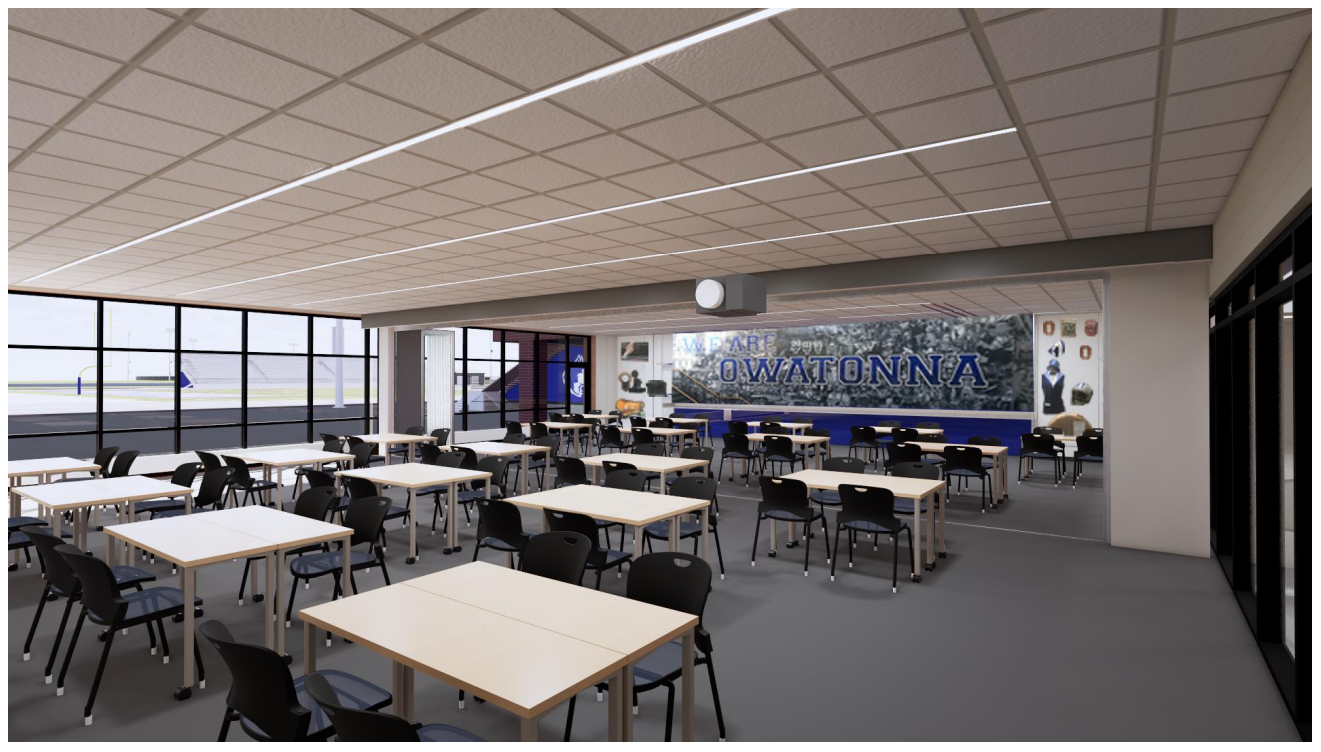 A view from inside the community room. The diving walls which maximize the room’s flexibility. (Photo courtesy of Owatonna Public Schools)

Jolayne Mohs, Facilities Committee member, updated the board on the progress of the new high school, adding that the project is on time and under budget. The new school is expected to cost $126 million, with $22 million of that coming from donations from Owatonna’s business community. Building plans will go out for contractors to take a look at on Feb. 5, with a bid date of March 9. Contracts will be brought to the board for approval on March 29.

According to Mohs, the administration is starting to consider the different ways to use technology to gather initial input from the community and organizations that might have some ideas for the existing building.

“So we can line up the timeframe as best as possible to move into the new school and then have things solidified and work to get done on the existing school,” Mohs said.

Another large donation to the district included $50,000 from the 761 Foundation to upgrade and improve the new Melanie Nelson ISD 761 Learning Zone Building, gifted to the district last September. The building will be used as the district’s professional development center, shipping and receiving area and print shop.

Elstad took a few minutes on Monday to express gratitude toward all those that have donated to the district regardless of the amount. 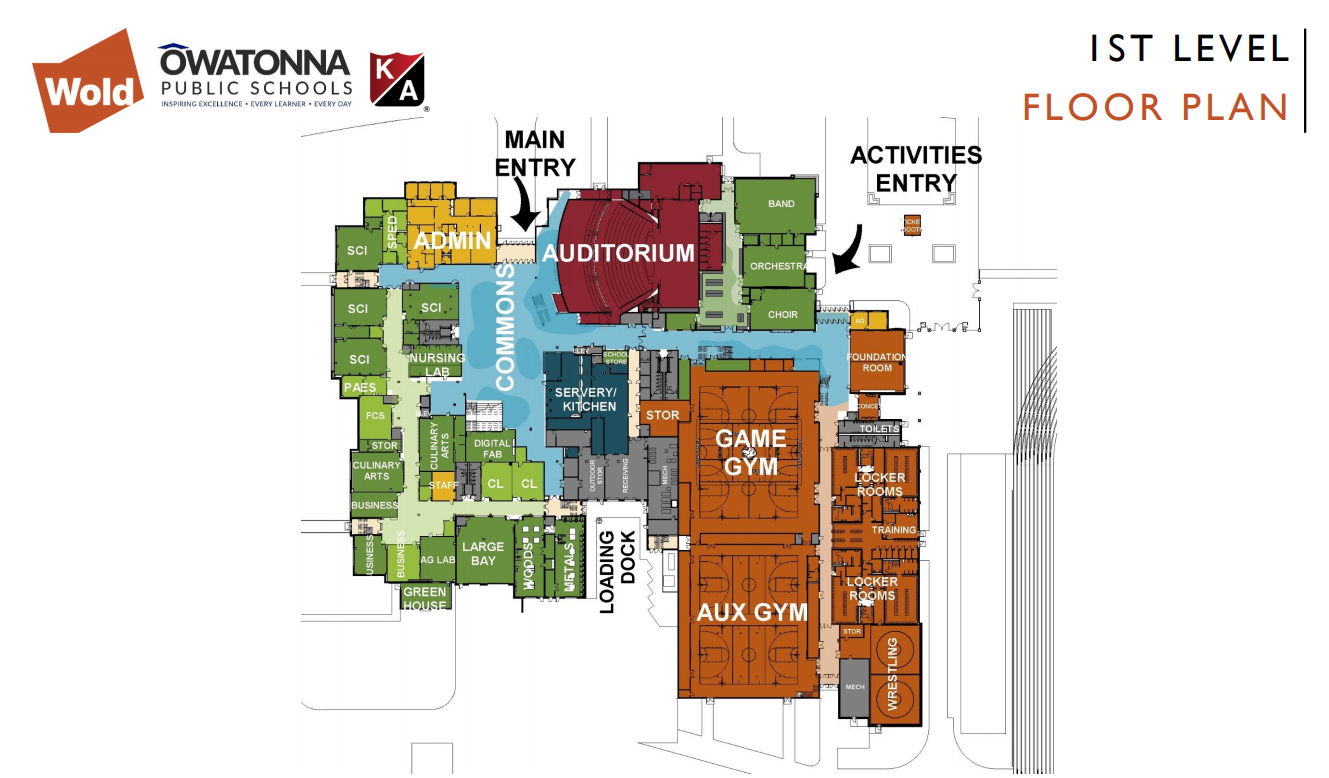 After much debate from the core planning group, it was decided the school would be a three-level building. The Foundation Room, or community room, will be located by the activities entrance. (Photo courtesy of Owatonna Public Schools)