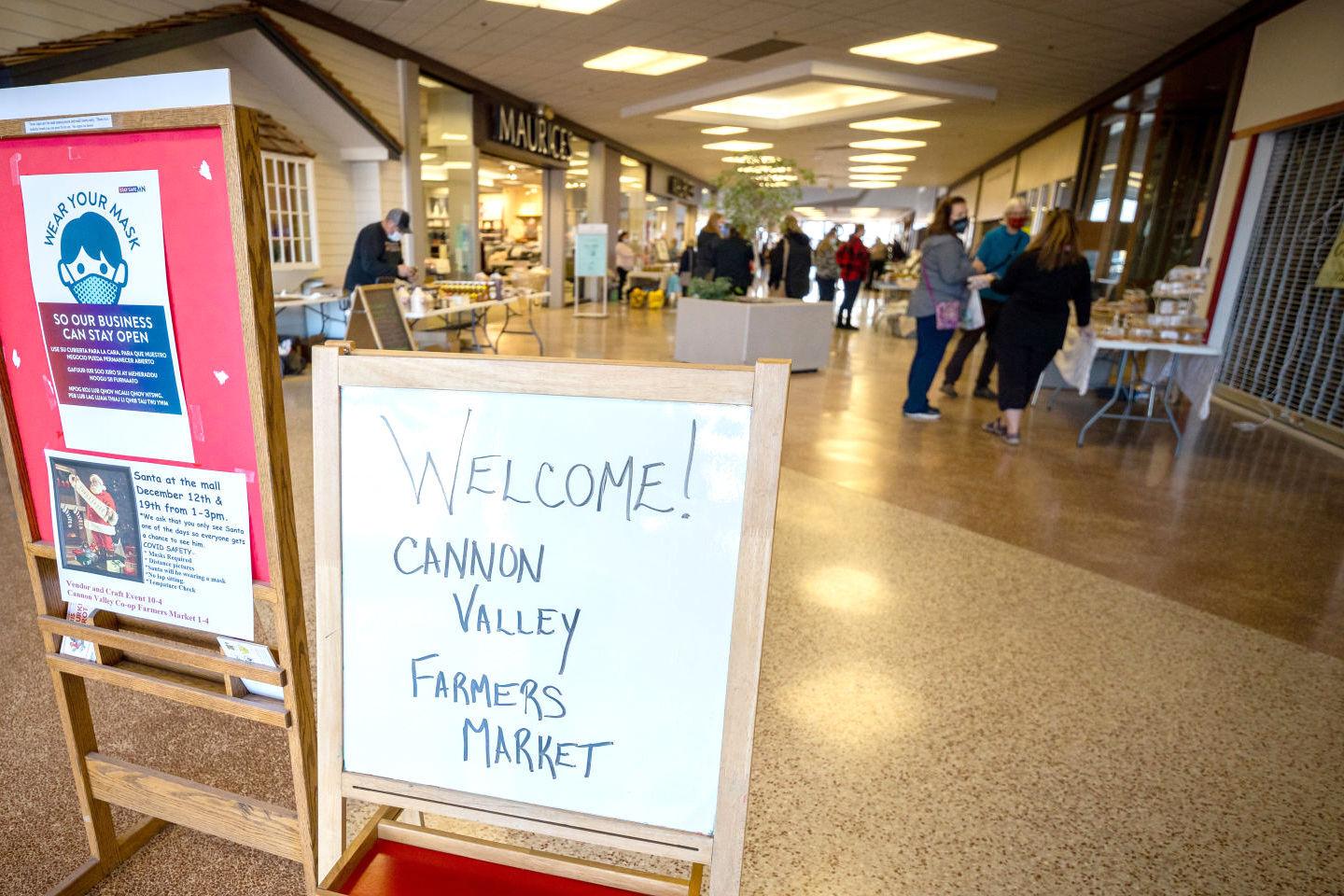 The Cannon Valley Farmers Market, formerly known as the Faribault Winter Farmers Market takes place at the Faribo West Mall. The mall’s large space allows for social distancing. Participating vendors are from Medford, Faribault, Northfield, Dundas and other locations from across the area. (Photo courtesy of Evan Pak) 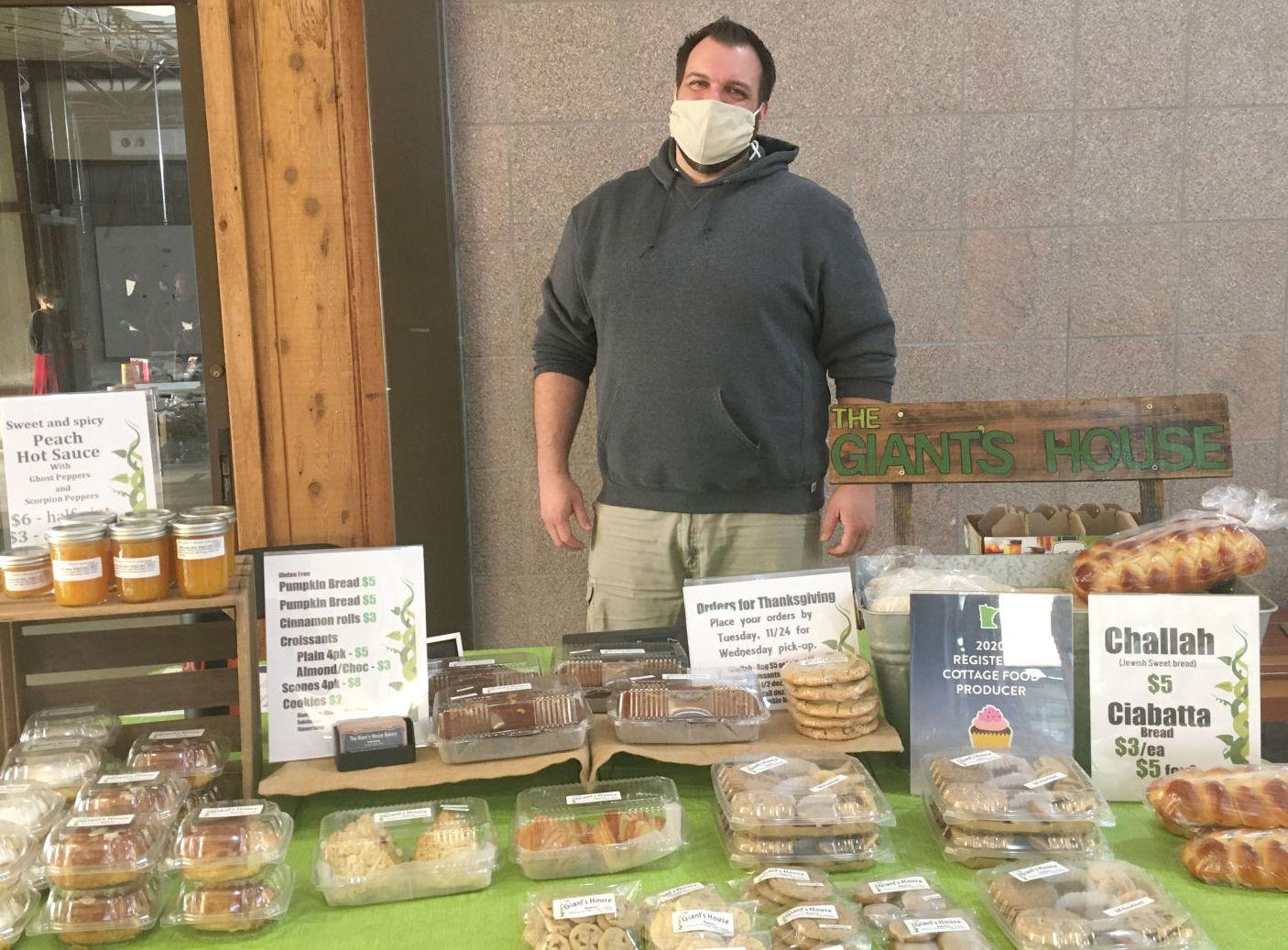 Kelly Hulsing, of The Giant’s House Bakery, provides an assortment of baked goods including scones, croissants, cookies and breads, like challah and ciabatta bread. (Photo courtesy of Tiffany Tripp)

Scott Kozelka, Wayne Steele and Bruce Busho with the Steele County Free Fair ran into the popular ‘Moogician’ at a county fair in Florida early this month. The Moogician — an educational magic show act — is one of several returning acts to the 2021 SCFF. (Photo courtesy of Scott Kozelka)

With the weather teasing spring earlier this month, the same question has been on every Steele Countian’s mind: Will there be a fair?

“We are having a fair,” Kozelka said, confident in his positivity. “No ‘what if’s’ and no ‘wait and see’s.’ We are moving forward like we would any other year.”

The SCFF Board continued as usual during its meeting Thursday with the discussions around vendors, food booths, entertainment and grandstand acts as the anxiously prepare for the return of the state’s largest county fair. On May 26 last year, the fair board had unanimously approved canceling the 2020 event due to the ongoing COVID-19 pandemic. At that time, the 2021 fair was a mere 445 days away.

Now the countdown is at 152 days and the plans are falling into place.

“Being a late fair is awesome in this case,” Kozelka said, noting that their opening day of Aug. 17 plays well into the continual improvement of COVID-19’s presence in Minnesota.

“As more people are getting their vaccines and we continue to show progress in the state we are feeling really positive.”

Though there are definitely certain things still up in the air for the fair – specifically whether 4-H will be allowed to showcase while the public is on the grounds or what the spacing requirements between booths will ultimately be – Kozelka said it is slowly starting to feel like a normal pre-fair season as applications for vendors continue to come in.

“We have a couple vendors that aren’t coming back for one reason or another, but we already have a list of people waiting to come in,” Kozelka said. “We will probably have to change some stuff around – it’s sort of like building a puzzle at this point.”

Kozelka and several other board members were able to visit a county fair in Florida recently, where the state is completely open from any COVID-19 restrictions. Kozelka said they felt safe with the way the fair was set up and that adding extra handwashing/sanitizing stations and signs about wearing masks and social distancing seemed to help the patrons of the fair be considerate of others.

“We were already big on promoting handwashing at the fair. Think about it, before COVID-19, we had E. coli, swine flu, bird flu,” Kozelka said. “Now with this pandemic we have the added masks and hopefully by the time our fair comes, most people will have received their vaccine.”

Proudly showing off his vaccine badge (or Band-Aid) of honor on his left arm, Kozelka said he hopes as many people as possible will consider getting vaccinated to help promote herd immunity and allow for everyone to enjoy the fair this year.

Many of the acts for the various entertainment stages and the grandstand that were scheduled for the 2020 event have carried over to this year, though there were a couple unanticipated openings for the fair board to fill. Minnesota county music star Chris Hawkey – who first came to the SCFF in 2019 as one of the grandstand headliners – announced that he is taking a year off from touring, leaving one opening in the grandstand lineup that the board is still working on filling. The band Endless Summer, which was scheduled for the Fair Square stage, also had to cancel due to the death of a band member from COVID-19.

Every day that the fair gets closer, Kozelka said restrictions are loosening and things are looking more and more positive that the SCFF the community has always known and loved will return.

“With everything that has happened this last year, with all the loss and kids not being in school and so many community events having to be canceled, we need this,” Kozelka said. “We need to do this for each other.”

STATS OF THE FAIR

Number of nonprofits that benefit at the fair: 30

Collecting academic assessment data has been difficult this past year while area educators’ prioritize making it through an unpredictable year.

The Minnesota Comprehensive Assessments testing was canceled last spring as the state focused on dealing with the pandemic’s early days, but this spring, COVID-19 won’t be stopping Medford schools from offering the standardized test to students. The district plans on testing like it normally would with more room for flexibility.

The Medford school district does not have much for data from last year to compare itself to other schools, according to Cole. The Minnesota Department of Education says results from this year will be used for in-house comparisons, rather than placing an emphasis on comparing schools and using results as an indicator of teacher evaluation.

“We just need to get a baseline to see where students are and I think this will give us a chance to kind of figure out where we need to go as a school,” Cole said. “I know not everybody is excited about testing, especially since we’ve been all over the map as far as learning models go, but it’s going to have to happen sooner or later so we’re prepared for that.”

MDE said testing would continue as normal when the 2020-21 school year first began, however MDE also made it clear that was subject to change based on what it heard from the U.S. Department of Education, Cole said. A couple weeks ago, it was announced that testing would take place, but the U.S Department of Education would be willing to discuss flexibility on various aspects of testing including testing windows, testing times and the possibility of not testing some students.

“MDE has been communicating some of the exceptions for this year and what we can do to support our students and teachers and staff members so that it can be meaningful and that we can get some data and get things moving forward,” Cole said.

Some assessment testing has already occurred earlier this year. Cole said the district is still sorting through the results and taking into account students’ various situations this year. For example, they are trying to understand and analyze the results of Star testing.

“Those (Star tests) are important for planning and meeting individual student needs. We’ve continued that and teachers are doing a really good job as far as figuring out how we have to fill those gaps, especially from the unknowns of our distance learning from this past year,” Cole said.

As that work continues, Cole is confident in teachers’ abilities and resiliency. Teachers are good at looking at data and making decisions to meet their students’ needs prior to the pandemic, thus he trusts teachers will be able to continue meeting students where they are at now. He adds that it might take more communication, especially between grade levels while students move on to the next level.

Cole said he isn’t too worried about students being off the charts. He doesn’t anticipate having to make up a lot of ground over the next few years, and says things look more promising than he would have thought given the circumstances and that it will be nice to just have some data to start that work.

Schools will need to understand the impact of the COVID-19 pandemic on students’ academics and will need to find which resources students need following the pandemic’s end. Educators should be prepared to address educational inequities the pandemic has further created by looking at learning data, according to a letter from the U.S. Department of Education. Thus the department is offering some flexibilities to schools assessment, accountability and reporting systems for the 2020-2021 school year.

The state’s accountability system under the ESSA uses state testing, graduation rates and attendance to prioritize districts for support, both comprehensive and targeted support. MDE anticipates that support, typically provided by the Minnesota’s Regional Centers of Excellence, to broaden to include health support, changing programs to reflect changes in enrollment and revenue as well as a larger focus on student engagement.

The state’s letter identifies one key element to the addendum is to change the weighting from years surrounding the pandemic. MDE expects data from this academic year will be less representative of student education than data collected in 2018-19.

“While we hope that the destabilizing effects of the pandemic decrease during the next year and a half, we also expect somewhat greater uncertainty about 2021-22 data than we have about 2018-19 data. As a result, instead of weighting the three years equally when identifying schools for support, we propose to weight 2018-19 data most heavily, followed by 2021-22 data, with the least weight on 2020-21 data,” the letter reads.

The addendum replaces the consistent attendance indicator for this academic year. The state will be looking at how many students return to their school after the summers of 2020 and 2021 and use that data to compare to the average retention rates before the pandemic. MDE is also allowing flexibility regarding graduation rates.

The U.S. Department of Education believes that if there are places where students cannot come safely into the school building due to the pandemic that they should not be brought in for the sole purpose of taking a test. Instead the U.S. Department of Education suggests districts consider giving shortened versions of the statewide assessments, offering remote testing if feasible or extending the testing window.

MDE is offering longer testing windows and more flexibility for giving make-ups tests. Families that have chosen distance learning for their students are still expected to participate unless the student or family indicates that they will not be testing. If the family does not communicate this, the absent test code will be indicated.

Jasinski, 54, was placed on unsupervised probation March 12 in Rice County District Court after pleading guilty to misdemeanor careless driving. Judge Karie M. Anderson dismissed one count of driving while impaired in accordance with the plea agreement. While on probation, Jasinski is required to undergo a chemical dependency evaluation/treatment and follow all recommendations. He was given a stayed sentence of 90 days in jail while he serves the unsupervised probation. Jasinski was fined $285.

Jasinski was originally cited by Faribault police Oct. 3 for two misdemeanor counts of DWI as he successfully sought a second term in office. He defeated challenger Roger Steinkamp in November. At the time of his citation, Jasinski said he took “complete responsibility” for his actions, adding that he was “awaiting the legal process” before commenting further case.

Jasinski, a Faribault native and real estate broker, served for more than a decade on Faribault city boards, two years on the City Council and eight years as its mayor. He was elected to the state Senate in 2017 and quickly aligned himself with the body’s powerbrokers. He’s largely credited as the driving force behind funding for the four-laning of Hwy. 14 between Owatonna and Dodge Center, a project discussed for 50 years.

Phone calls placed to Jasinski were not returned.