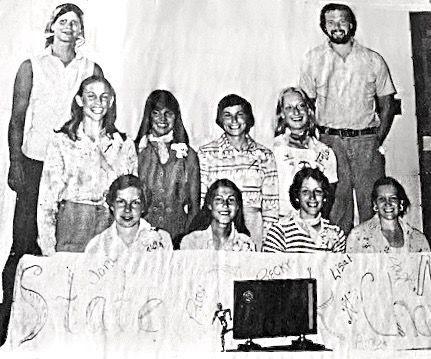 The Degner Regional Airport in Owatonna will be the recipient of a Federal Aviation Administration grant that will fully fund the construction of a new T-hanger, providing up to an additional 10 aircraft storage units. (Press file photo)

There is currently no space for aircraft storage at Owatonna's Degner Regional Airport, but thanks to a recent Federal Aviation Administration – or FAA – grant that may be able to change in the near future.

“We anticipate the need for more [storage] by the time we build another hanger, we do have a number of people who have inquired about hangers and are on a waiting list,” said Dave Beaver, the airport manager. “This project has been identified in our airport master plan as a need we were anticipating, so we are following through with that approved planning guidance.”

On Tuesday, the FAA announced that $800 million in airport safety and infrastructure grants would be awarded to facilities in 46 states, Guam, the Northern Mariana Islands, Puerto Rico and the Marshall Islands. Owatonna’s airport is included in the list of recipients, being awarded $272,733 for construction, modification, improvement or rehabilitation of a hangar.

“We only requested about $134,000 in our application, so I think it might have been a bit of an error – I don’t think we’ll be awarded more than what we applied for,” Beaver said. “Either way we will put all the money toward this project.”

The project in question is the construction of a new T-hanger, which Beaver said is an aircraft storage building that will bring up to an additional 10 hanger units for individuals to rent and store their aircrafts in. As of now, the airport has three hanger storage buildings with 10 units each.

“This will be the initial phase of the project for us to look at options and design, which will include the taxiway and some other things with the site as well as the building itself,” Beaver said. “We’ll follow that up with a construction year maybe next year.”

The cumulative total of the FAA grants includes $689 million from the Airport Improvement Program and $104.4 million in Coronavirus Aid, Relief, and Economic Security – or CARES – Act. The total allows the projects to be 100% covered through the federal grants.

“These 383 grants will allow airport sponsors to either begin or complete construction projects that will maintain the safety and efficiency of our national airport system,” said FAA Administrator Stephen M. Dickson.

“We are excited to take advantage of the funding and try to make these improvements in anticipation of the increased need,” Beaver said.

'These 383 grants will allow airport sponsors to either begin or complete construction projects that will maintain the safety and efficiency of our national airport system.'

With COVID-19 continuing to spread locally, Honoring Choices of Faribault and Owatonna has announced that it will offer its advance care planning course online this month.

At the workshop, guests learn about why it’s important to have an advance care directive and how to create one. Program Coordinator Pat Heydon has worked hard to promote the course and said that it’s gained in popularity over the last several years.

The online course will take place in two hour long parts, both of which will be held multiple times during July. The first will provide an introduction to advance care planning, while the second will focus on completing your advance care directive.

When the pandemic hit in March, Honoring Choices had no option but to abruptly stop its programming. Heydon said that new referrals to the program also plummeted, with people focusing on just the most essential care.

Even with the pandemic continuing, Heydon said that referrals to Honoring Choices have rebounded significantly. She said that only makes sense, as the pandemic has underscored the importance of being prepared for the worst.

“We have seen COVID-19 impact people differently and create serious health conditions for people who may otherwise be considered healthy,” Heydon said. “That just enhances the need for people to consider completing an advanced health care directive.”

Heydon said that if a person is able to get an advanced care plan in place, it ensures that their wishes are respected and dramatically reduces conflicts within families. Course facilitators provide a blank health care directive form for each individual to fill out according to their wishes.

Federated Insurance’s Julie Rethemeier said that Federated has gotten behind the program as a way to give back to the community. She said that the company values the course so much that about 75 employees have completed it themselves.

“From a risk management perspective, we decided (that supporting Honoring Choices) was the right thing to do for the community,” she said.

The class is designed to provide help for people who have thought a great deal about an advance care directive, and for those who know very little about how the process works. Trained staff are available to provide any assistance needed.

Heydon emphasized that everyone over the age of 18 is encouraged to consider filling out an advance health care directive. She said that it’s never too soon to prepare for the worst, noting that recent numbers have shown a large spike in COVID cases among people in their 20s.

Heydon said she understands that those who haven’t seen a health care directive form may have more questions than can be answered in a short class. She and her staff can set up follow-up appointments for those who have questions. Those sessions are also free.

Under normal conditions, those follow-up meetings could be held in person, along with other scheduled classes for families and group homes interested in learning more. For now, they will have to take place electronically.

Participants are required to register in advance for Honoring Choices's classes, as space is limited. To register for a class, contact program coordinator at 507-977-2330 or email honoringchoices@allina.com.

The second, Completing your Health Care Directive, will be offered just four times and on only two days. Those times are from noon to 1 and 5-6 on July 16, and noon to 1 and 5 to 6 on July 30.

The two courses are free, and people are encouraged to take them both. More information can also be found at Honoring Choices's Facebook page. 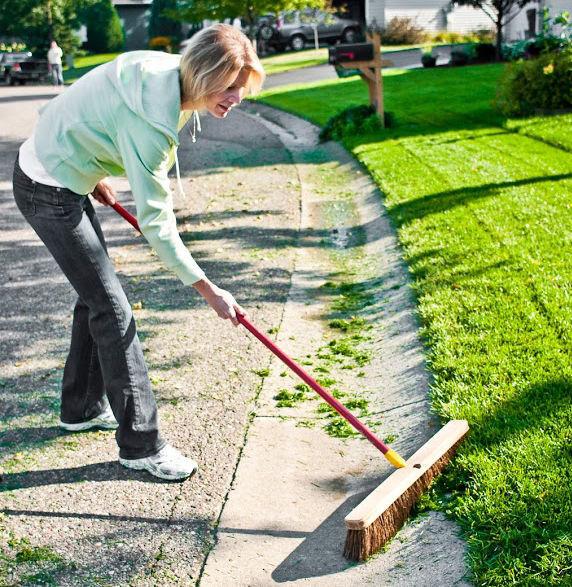 Instead of letting lawn clippings blow or wash into the sidewalk or street, take a minute after mowing to sweep grass clippings back into the lawn where they can fertilize the soil. (Photo courtesy of Kevin Strauss)

The Blooming Prairie Awesome Blossom watches over the school’s state championship football team at a victory celebration this fall. Earlier this week, the unique mascot placed second in a statewide competition hosted by the Minnesota State High School League, losing by less than one point to the Moorhead Spuds. (Bridget Kranz/People’s Press)

A mascot match-up between the Blooming Prairie Awesome Blossoms and the Moorhead Spuds came down to the wire Wednesday morning, with the area’s home team ultimately finishing a close second.

For the final round of voting in the Minnesota State High School League Nickname Challenge, anyone with an account on the social media platform Twitter had 48 hours to cast a vote for their favorite mascot. The poll, hosted by league media specialist John Millea, opened Monday morning and the winner was announced just after 11 a.m. Wednesday.

While the Spuds were in the lead for much of the matchup, the Blossoms came back briefly during the last few hours of voting. It looked like anyone’s game down to the last second when the Spuds pulled back in the lead — gathering 50.4% of the vote, as opposed to 49.6% for Blooming Prairie.

“We were behind by at least 6 points for a while, and I didn’t know if we could win it. Then around midnight or 1 a.m. on Wednesday, we slowly crept back up,” she said. “I had looked around midnight and started seeing some changes, and then I happened to be up around 4 a.m. and it was tied.”

Earlier this week, Mach said she had talked with fellow administrators in the district about how it was stressful again watching the numbers come in. “It was the first competition I felt like I’d had in months,” she added.

“The Spuds got off to an early lead at the beginning, then it got to a 6-point lead,” recalled Millea. “After going through the entire 64-school bracket, I learned by watching that there’s an ebb and a flow — but when someone has a 6-point lead, that’s really hard to change.”

Still, the Blossoms came back Wednesday morning before their narrow loss. Millea added that he got a message from a fan saying it seemed like the Spuds had just hit a 3-point buzzer beater to win it all Wednesday morning.

In starting the tournament this spring, Millea said one of his goals was to replicate a high school sporting event and give communities a sense of that competition during the pandemic. Still, while there was some friendly banter sent back and forth between rivals — including the Moorhead Orchestra offering to send potatoes to Blooming Prairie next spring, in return for flowers — Mach added that one of the most fun things about the competition was the camaraderie and the chance to learn about other school districts in the state.

“The longer it went on and people kept hearing more about it, the more people paid attention and that’s what was so fun about it toward the end,” she said, “we were learning about other schools and sharing more about our history.”

While Millea said he wasn’t surprised to find the Blossoms squaring off against the Spuds in the final, he didn’t have a clear favorite going into the championship round. While Moorhead had made a pretty clean sweep of their challengers up to that point, Blooming Prairie had had some closer matchups.

“Moorhead is a bigger community, you’ve got to figure there are more Twitter accounts tied to Moorhead than to Blooming Prairie,” he added, “but you can’t quantify that and there are so many people voting who are outside those two communities.”

Another consideration was that Millea felt a smaller community like Blooming Prairie might attract voters from other similarly-sized towns. In the end, the hard-to-predict matchup ended up almost being a tie. Looking at the percentage margin and the total 6,872 votes cast in the championship, Millea said the difference came down to roughly 55 votes.

Coming in second, the Blossoms will still be honored by the league this fall, as well as by one of the league’s sponsors — Pizza Barn in Princeton. According to Millea, the restaurant’s owner wanted to create two specialty pies in each finalist’s honor. For Moorhead, it will likely be potato-themed. For the Blossoms, Millea said it could likely be a take on a blooming onion — which is cut to resemble a flower and then deep-fried.

As of now, Millea added that he’s not exactly sure when this will be but hopes to be able to visit some time this fall once classes are back in session and it’s safer to have a larger celebration. Similarly, he said he’s not quite sure if the league will do another Nickname Challenge, or when that would take place.

“You don’t do this every year because the nicknames don’t change. Maybe you do it five years from now…. If you do it every year, that takes the luster off of it,” he added. “It would be like voting at the Oscars every year, but with the same movies on the ballot.”