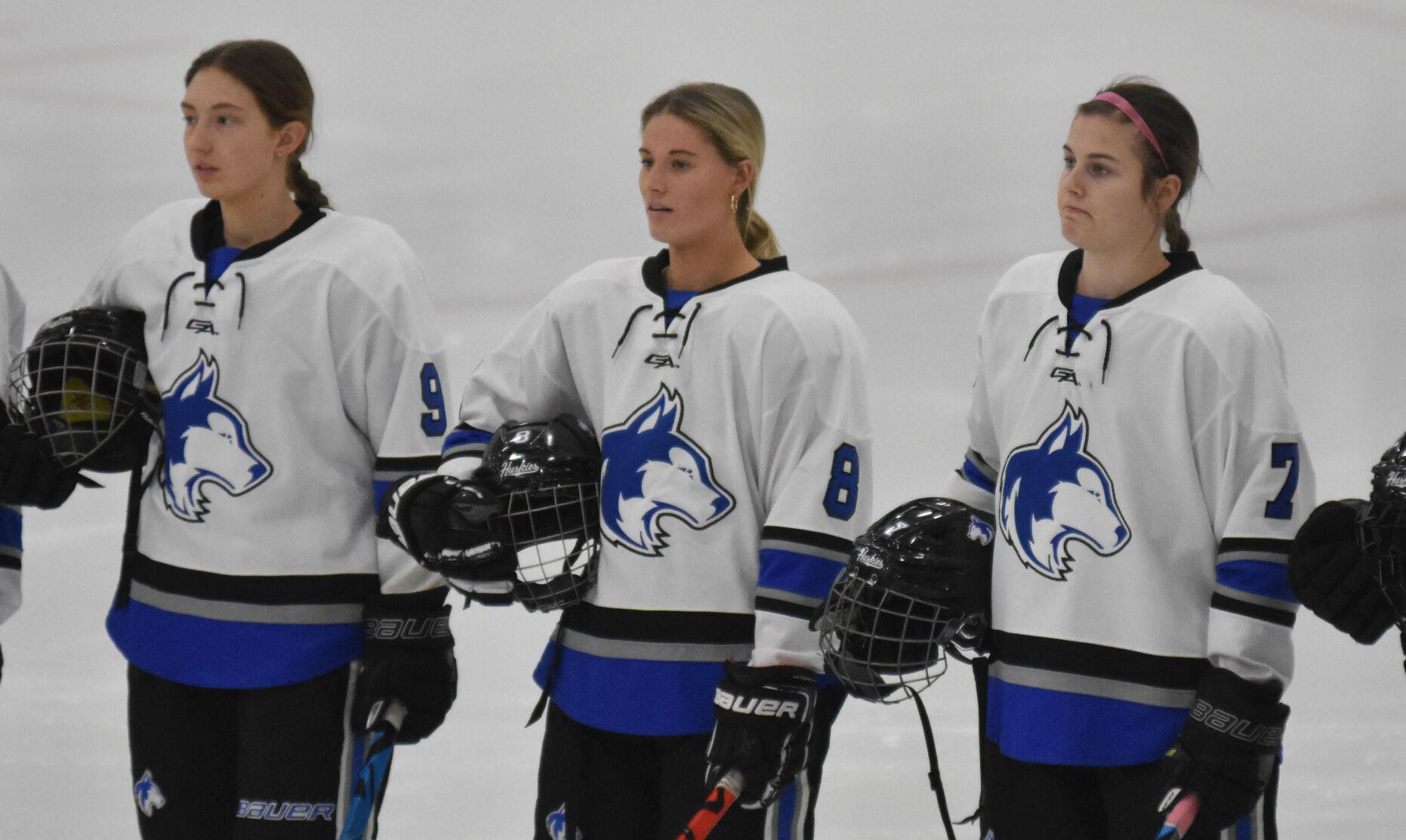 Owatonna Public Schools have long been applauded for their high standards in curriculum, and they continue to be ahead of the curve.

In 2019, the Minnesota Department of Education reviewed the science standards for K-12 education previously set nearly a decade earlier. In 2020, the legislature approved the implementation of upgraded standards that was supposed to be fully implemented by the 2023-24 school year, but due to the COVID-19 pandemic, an additional year was granted.

Owatonna School District STEAM Education Coordinator Dr. Tom Meagher said he is continuously impressed with the “amazing” faculty within the district for embracing the new standards and diving in head first. 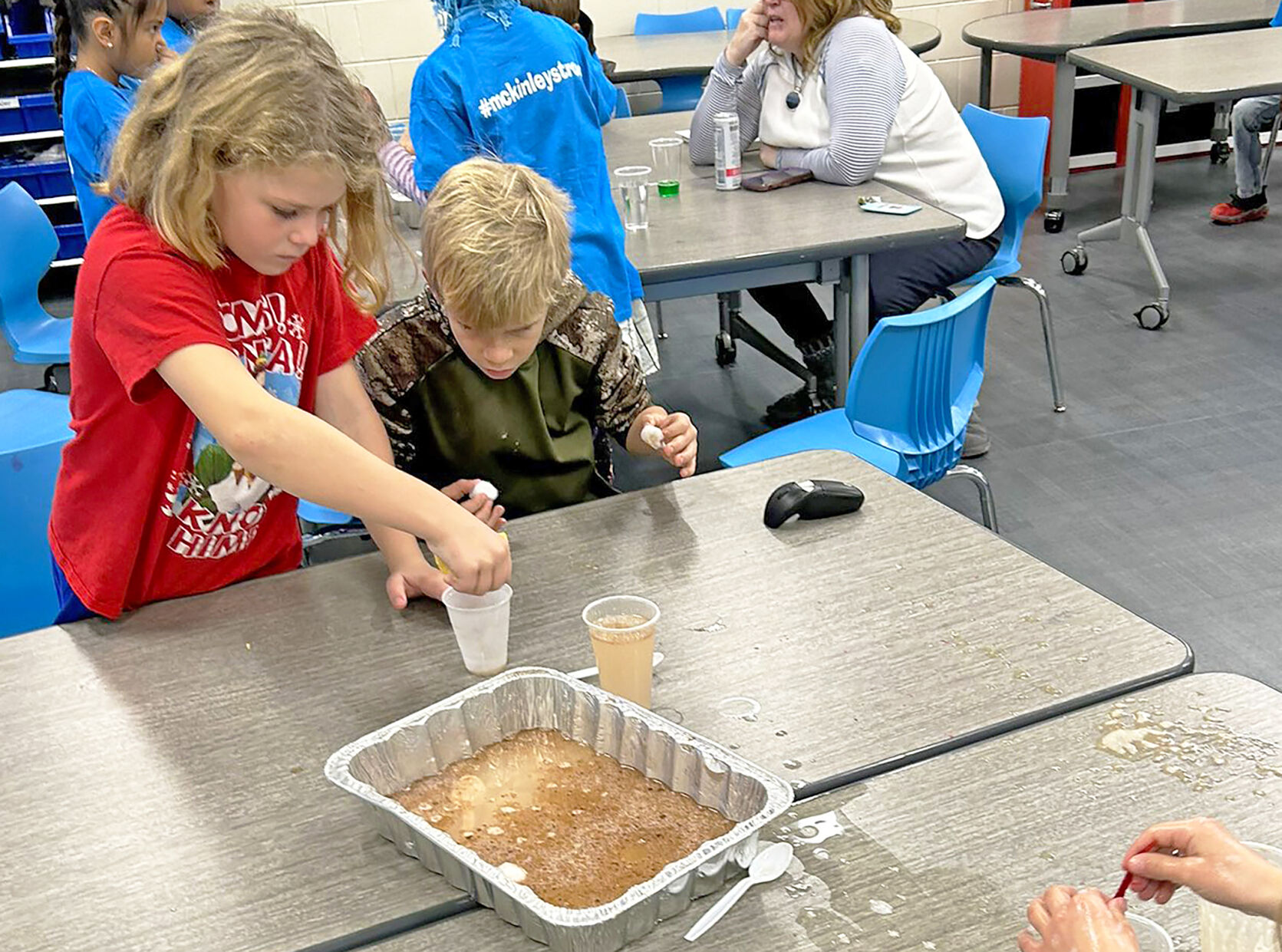 “As I was looking at the standards I realized we’ve already been doing a lot of that,” Meagher said. “The science and engineering practices fit perfectly with our training and the work we’ve done over the last few years. It’s good because this means our schools have been setting standards regionally, nationally and I believe international as well.”

For kindergarten through fifth grade students, the biggest changes aren’t so much with the curriculum but more with the methods by which educators are teaching science.

Matt McCartney, second grade teacher at Washington Elementary, said the new 21st Century Learning standards have already been implemented in his classroom. One example of how he is utilizing the new standards which encompass more in engineering and critical thinking was a project where he had the students take napkins, string, paper clips and more to create a parachute during a weather unit.

“The challenge was they had to create a parachute that would be able to drop supplies down to firefighters who were surrounded by fire,” he said. “They used engineering and critical thinking to design their parachute in groups working together and they also had to work with a budget where they were only have to purchase so many supplies which was an added constraint they had to work around.”

“I think a lot of us assume kids that age can’t think abstractly, but they can.” he said.

Meagher said for grades 6-12, there have been some major changes and shifts with the new standards.

“The subjects have kind of shifted around a bit,” Meagher said. “We looked at a timeline on how to implement the standards effectively and in the science committee we said we’re just going to go ahead and do it.”

He said across the district, teachers are about a year ahead of schedule as far as introducing the new standard go and he attributes that to all of the educators being passionate and willing to jump in.

“I think this has ended up being more financially effective too because we have a lot of supplies for science from FOSS,” he said. “Since we have so many supplies, we are able to reuse many of them and shift them between grades and classes.” 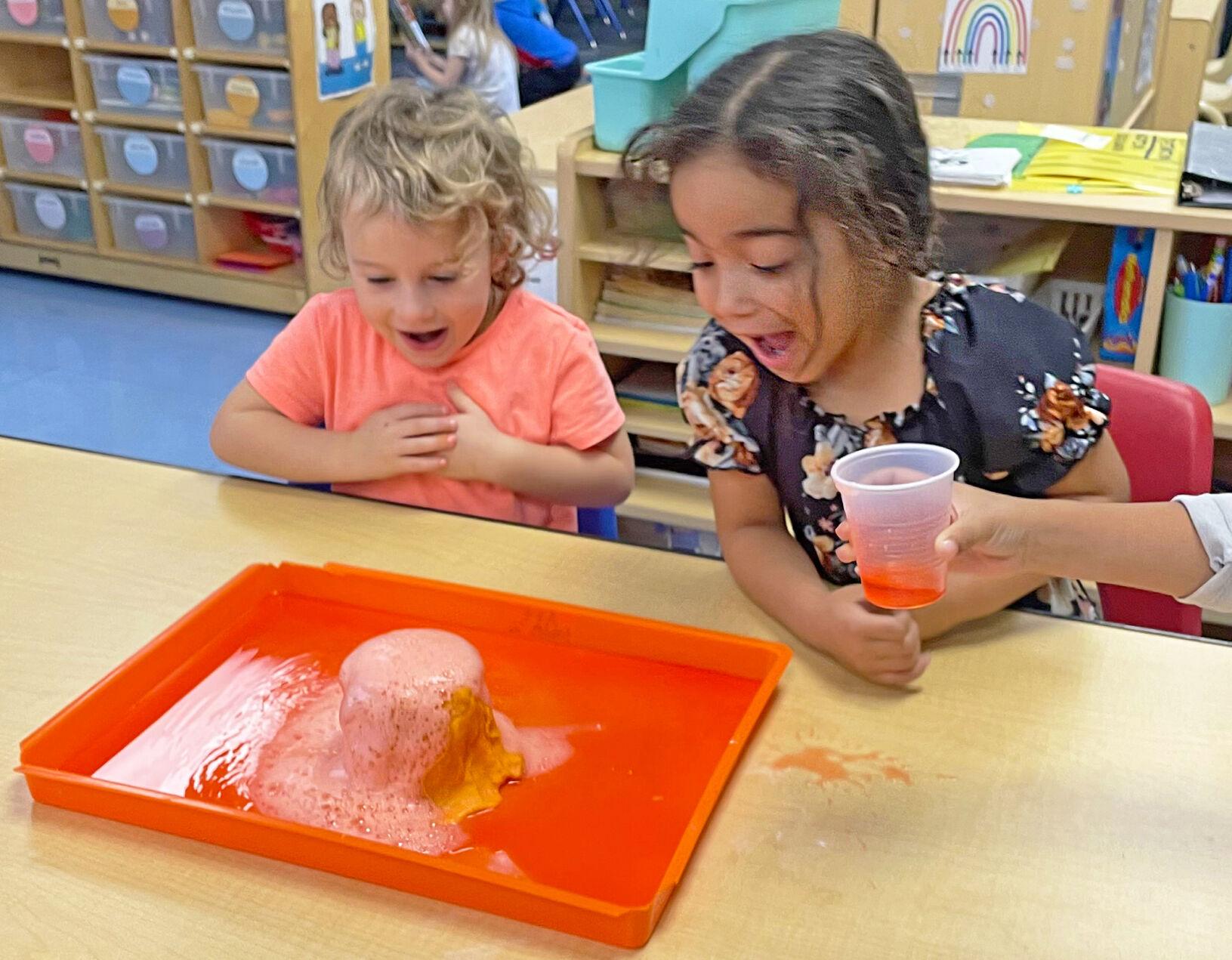 Two students from Ms. Weber’s Bright Beginnings Preschool class get excited over a colorful and bubbly science experiment. This is just the beginning of their exploration of science, as Owatonna Public Schools continues to prioritize their STEAM curriculum as new Department of Education standards come into play. (Photo courtesy of Owatonna Public Schools)

Shifting and reusing the science supplies from FOSS kids has been able to save close to $100,000 across the district.

“This just shows the ingenuity of our teachers,” Meagher said. “If we can figure out how to do this and re-use or readapt what we have for new topics and save the district money, we’re able to put that elsewhere to benefit the students and in turn the students see that if we can reengineer things as teachers, they can take that to their own ideas in the classroom.”

The COVID-19 pandemic has had a drastic impact on businesses, organizations and individuals nationwide. There was a time where most believed the lockdowns and event cancellations would only last a matter of weeks — few were prepared for the year’s long effects. 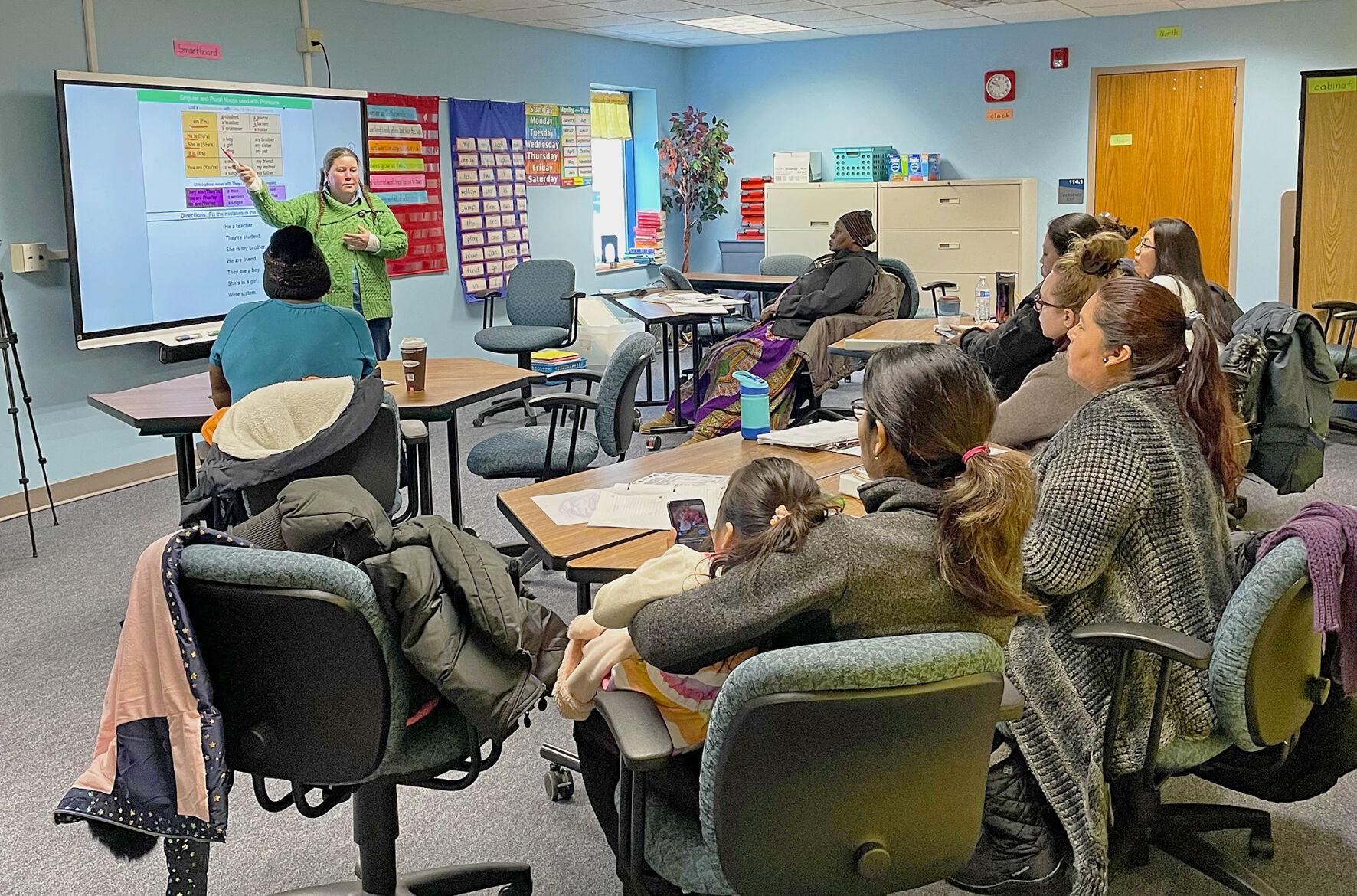 Volunteers were able to return to the Owatonna Adult Education center in September to help adult students with tutoring. Since volunteers have returned, several students have been able to pass their GED exams. (Photo courtesy of Lydia Yahnke)

Now, nearly three years later, the bulk of things are returning back to a sense of normalcy, including volunteers being welcomed back to the Owatonna Adult Learning Center at the Roosevelt School.

Lydia Yahnke, adult programs coordinator for Owatonna Community Education said the team and students struggled throughout the pandemic, with few students being able to dedicate time to classes who spoke very little English, and without English as a Second Language (ESL) volunteers, the struggles were ongoing.

“The few students we had throughout the pandemic were at a very beginning level and we had to communicate through Google Translate or other translation apps,” she said. “We did have our ESL volunteers, and that language barrier made it very difficult.”

At the time, one of the only Spanish speaking staff was working elsewhere in the building and was only available to help in the few spare moments she had. With seven different languages being spoken amongst current students, Spanish wasn’t always the language needed to translate.

“It was heartbreaking, because there were times where we felt like we couldn’t help them,” Yahnke said. “We were able to send them to some online programs we have access to, but even that hindered some of the students’ progress to getting their GED.”

With volunteers officially being welcomed back, Yahnke said the current volunteers are already making a profound impact with the more than 150 students currently enrolled.

“Everyone has a different story as to why they volunteer and we’re able to find good, strategic and intention programs for them to work with,” she said. “Having the volunteers is just that added boat and an extra something we need to make a holistic program coming back from COVID-19.”

From student to teacher

She said three volunteers were former ESL students who felt that they had plateaued in their English skills and began to feel stuck. They then began working with students, tutoring them and using their language skills in a different way by helping to translate and working on different aspects of the English language to not only get themselves off that plateau, but also give them new insight of going from student to teacher.

Maria Sanchez Castanon was an ESL student who is now volunteering to tutor in GED math. After being asked to join the leadership council, she felt she wanted to lend her English skills to other students with an assisted teaching position, but because that was already filled and she wanted to gain experience, she decided to volunteer to help tutor students in math.

“I like helping people and after finishing the class, I like seeing the students happy with the progress they made and encouraging them to come back to the next class,” she said. “If possible, I would love to keep doing that, plus if I had the chance to teach Spanish, I’d like to do so too if they ever offer that as a class.”

Mike Brooks was on a leisurely drive home when he noticed the electronic signs outside of the Roosevelt school calling for volunteers. As a retired mechanical engineer, he felt it helping tutor in math would be something good for him to do.

“It’s been a good fit so far,” he said. “I’ve taught 10 classes so far with quite a few different people and one has successfully passed his math GED.”

Brooks said one of the most gratifying aspects of volunteering for him is simply helping the students who are interested and motivated to pass the math portion of the GED test along with working with the staff through the ups and downs of teaching.

“I had one student who was interested in engineering and we were talking about the powers of numbers and all of the sudden she had an epiphany and got it,” he said. “It’s great to see those moments happen. The nice thing about math is that it’s its own language and it’s universal.”

Yahnke said that since volunteers have returned, eight students have passed their GED courses so far and she was comfortable saying that the volunteer math tutors were heavily responsible for at least half of that.

The adult education programs are always seeking volunteers and the process to get started is relatively easy. There are some regulations set by the state of Minnesota for those who volunteer with adult students. The process involves an interview with the team so the prospective volunteer can give a basic understanding of what skills they offer, who and what they want to work with and more.

Yahnke said generally they will be in a classroom working with students for a few hours to decide if they want to commit to being a volunteer and from there, they must complete a training online that is roughly 12 hours within a few months time and once that is complete, they can set a schedule with the school and their volunteer work can begin.

“It takes a special sort of person to work with adult students,” Yahnke said. “It’s a different population with different needs and circumstances but one thing that I’ve heard over and over is how rewarding it is for the students and the volunteers. Even if they are only able to volunteer for an hour a week, it still makes a huge difference.”

She said the team is always looking for volunteers in various subjects from math and english to social studies and citizenship tutoring. There is also a need for translators as well with several languages being spoken among students.

For more information on the Adult Education programs and to volunteer, visit www.communityed.isd761.org/adult-basic-ed 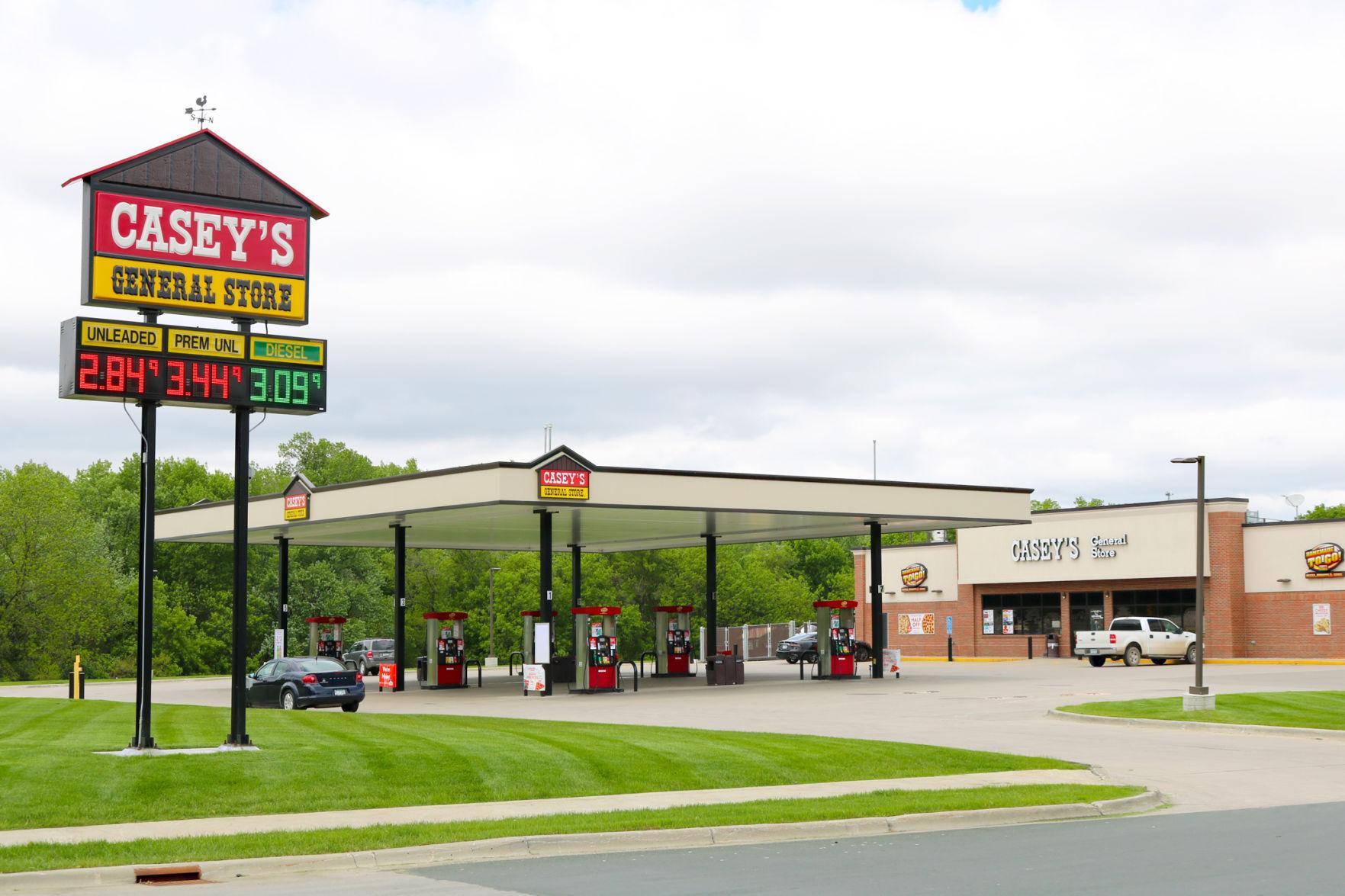 The Medford City Council has approved a 3.2% malt liquor license for Casey’s General Store on the north side of town. (Annie Granlund/southernminn.com)