Throughout December, Industrial Technology teacher Mitch Dinse has been working with his students in the Advance Woodworking class to attempt a first-time project as part of the manufacturing curriculum.

Last week, Dinse’s students took their projects to two elementary schools and built them with the younger kids. Dinse said with this being the first time he and his students have done this project, it went well and he hopes to continue the project for years to come.

“It all started as an idea that I heard from one of the admin staff as something fun to do and we took it and ran with it,” he said. “It was the first time we did this and didn’t really have a clue how it would go or what to do to prepare so it was a learning process for all of us, but it all turned out so great and we all had a lot of fun.”

Charlie Seykora is one student who participated in the class and activity. He said one of his favorite parts was getting out of the classroom for a couple days, but getting to help the younger students was also fun for him as well. 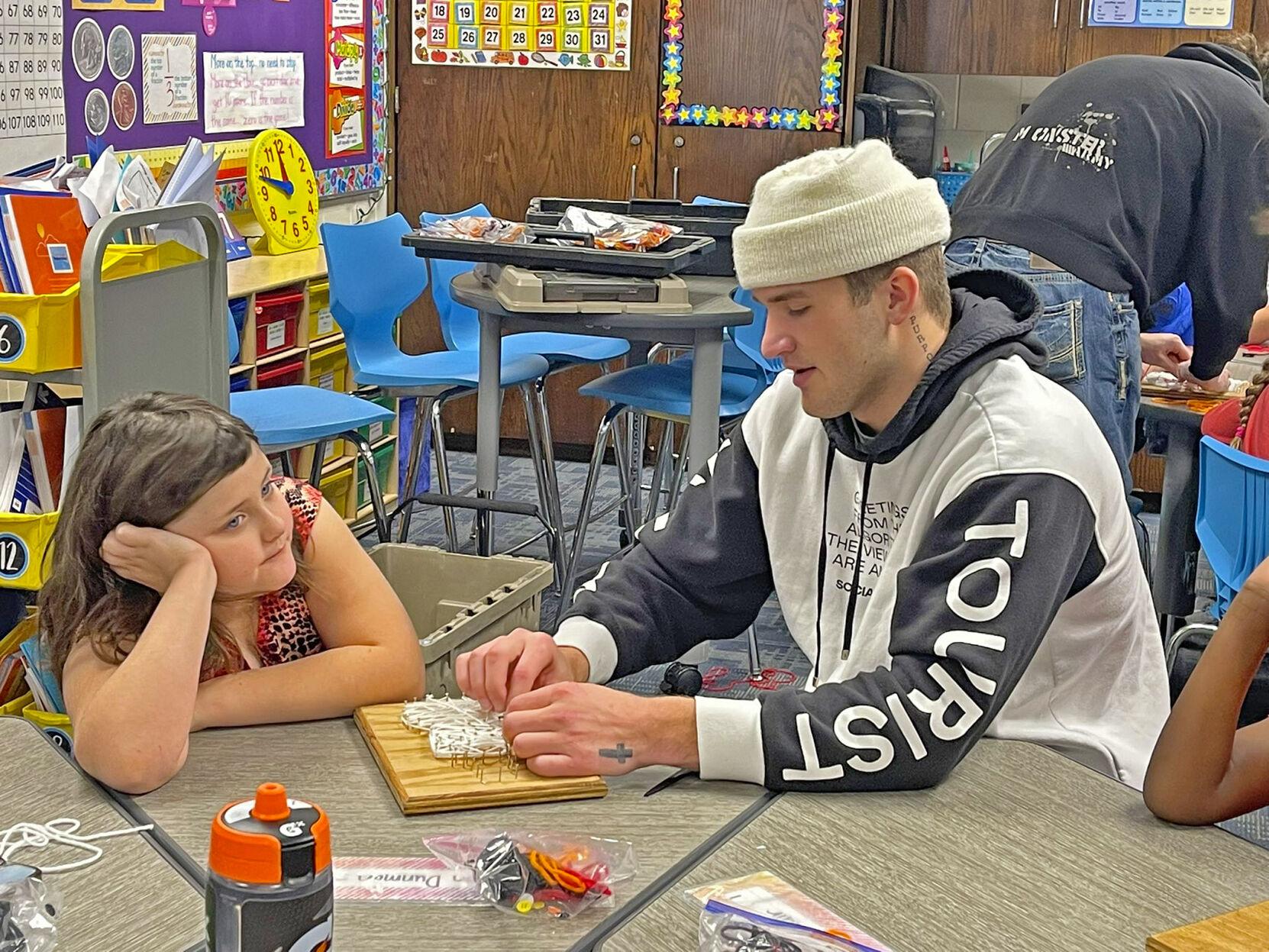 Devin Maas assists a third grade student in making a snowman out of the project kit he and his classmates helped put together as par of his Advanced Wood class. (Photo courtesy of Mitch Dinse)

“The elementary kids had so much fun. It was great to see their eyes light up and looking up to the older kids as we went through the project,” Dinse said. “My students had a great time. I think they enjoyed helping the younger ones and doing the project from start to finish. For me as a teacher, it was great to be able to step back for a minute and see my students take on the role of teaching and seeing them interact with the younger kids was so cool.” 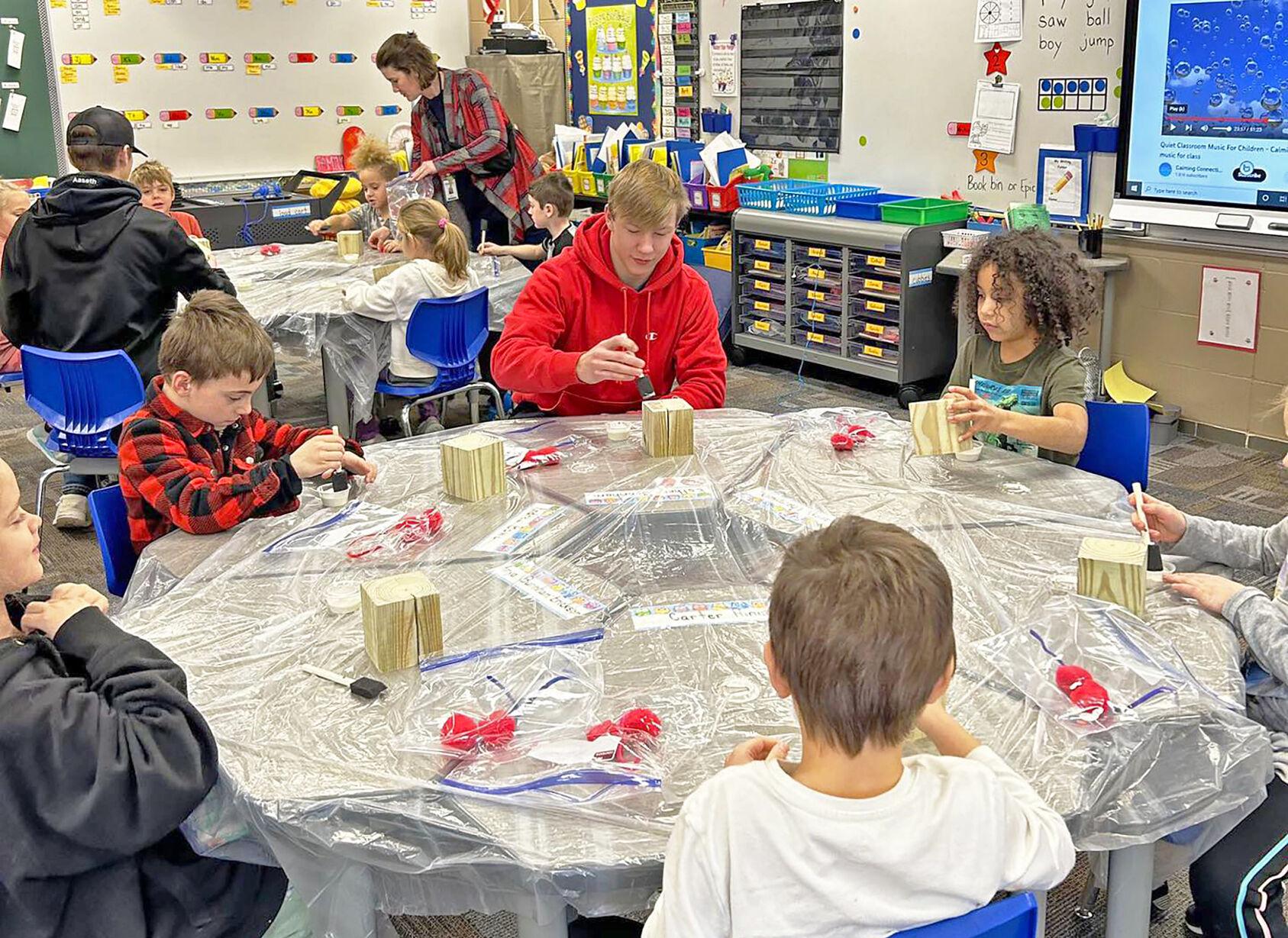 With this being the first time Dinse has done this project, he was pleasantly surprised by all of the positive feedback from the elementary teachers whose classrooms he and his students visited.

“The feedback from them was great,” Dinse said. “I told them this is the first time we’ve done this so there’s definitely room for improvement and to get better, but they all had nothing but positive things to say.”

He added the elementary teachers were impressed with how well the high school students were prepared with the kits down to the finest detail and with how willing they were to help the younger students along the way with the projects and hoped Dinse and his class had plans to return to do the project again. 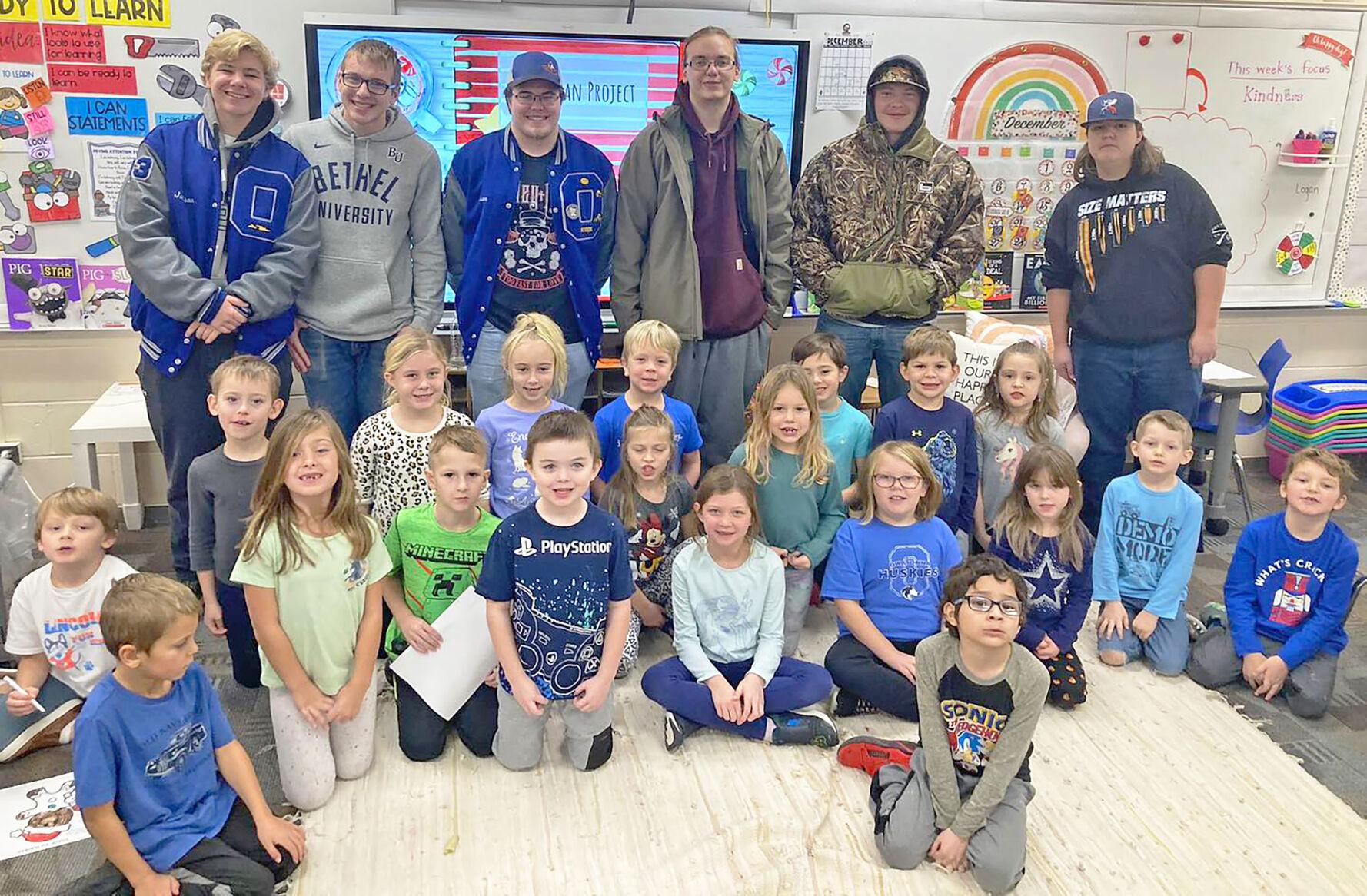 Both Dinse and Seykora said they heard many of the kids brought their projects home as gifts to their parents for the holiday season, and Dinse had heard from a few parents they were really surprised and thought the project was such a fun idea.

“I was definitely smiling ear to ear,” Dinse said. “I plan to add this project to every advance wood class moving forward. It was relatively easy and there’s so many different project kits the students can put together. I’m looking forward to doing this again in the spring.”

When Minnesota House Republicans weighed who should lead them into 2023, Rep. Lisa Demuth asked them to consider her qualifications — not her background — as they cast their votes.

Demuth is set to become the first woman to lead House Republicans and the first Black Minnesotan to lead any caucus at the Capitol when members of the 2023 Legislature are sworn in next week. 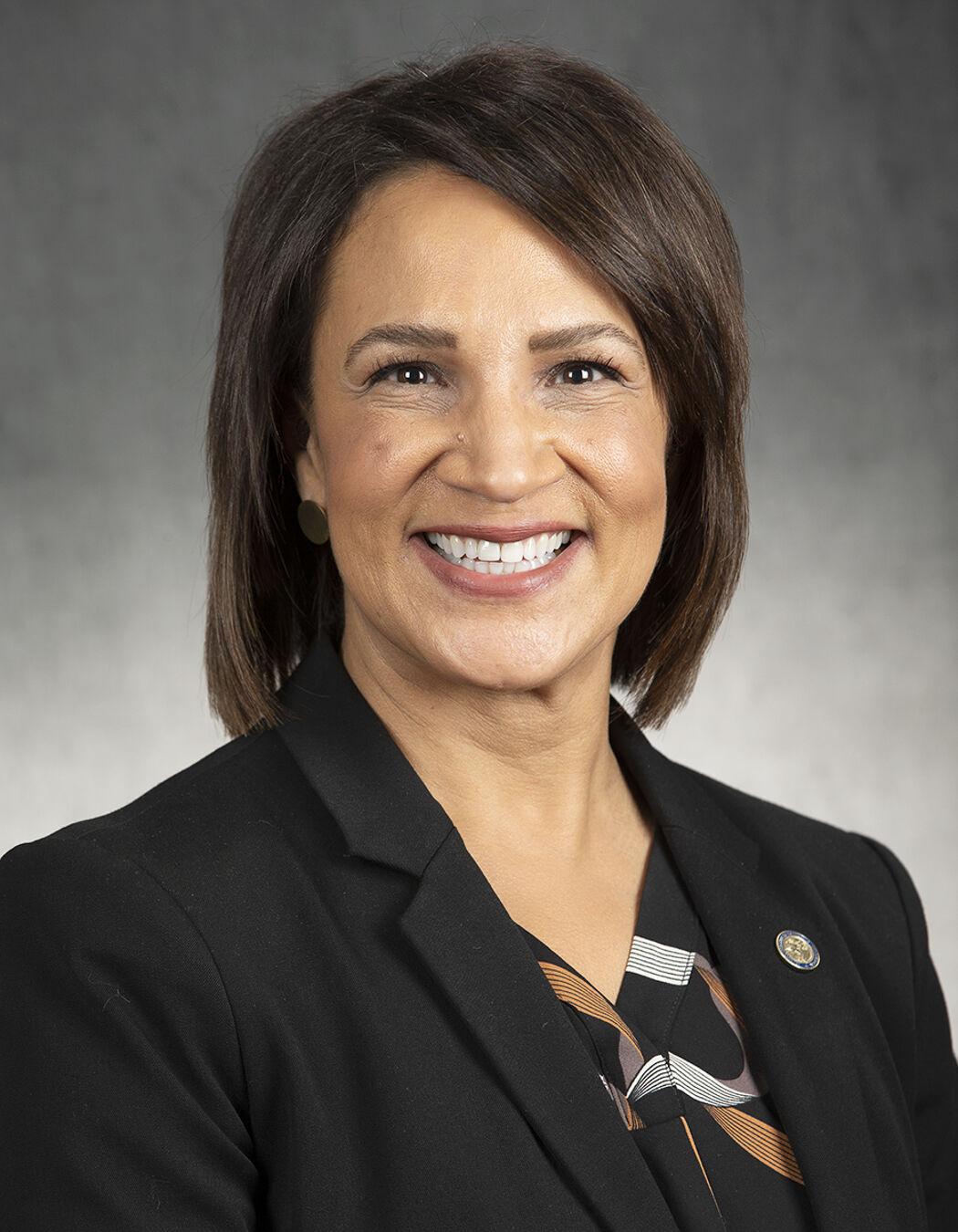 The Cold Spring small business owner and former assistant minority leader said she didn’t know she was breaking a glass ceiling when she got elected to lead the caucus. And that won’t influence her path forward, she said.

“That was never my intent. It is something that I’m not ashamed of in any way. But I would never lead with that. I’m here to do the job,” Demuth said of her race and gender in a November interview. “The fact that this is technically history making, I won’t shy away from that, but that doesn’t change how I’m going to do things.”

After surprise losses in November, Republican legislators chose new leaders to represent their caucuses in St. Paul. And in both the House and the Senate, they picked small business owners.

“I like to say I’m kind of like Ronald Reagan, except for I don’t have the personality, charisma or good looks, but I have the belief and conservative values,” Johnson said in an interview with MPR News.

With slim margins between Democrats and Republicans in each chamber, Johnson and Demuth could play a role in shaping budget decisions, as well as picking off DFL support for potentially controversial legislation.

“There are a number of those types of issues where overreach could actually end up really hammering on our communities, our families,” Johnson, the former deputy majority leader, said. “So we’re going to make sure that we hold Democrats accountable going forward.”

Both Demuth and Johnson have navigated bipartisan deals at the Capitol and said that going into 2023, they feel confident about their ability to work across the political aisle and to hold their members together.

“My approach is maybe a little softer, if I had to describe it that way,” Demuth said, comparing her style to Daudt’s. “But yet I am not afraid to get in and tackle hard issues and be the voice when that needs to happen. I do think that I’m a little bit more collaborative and I look forward to making sure that all 64 of our voices are going to be heard.”

Johnson also said that he hopes to run a caucus where all 33 members feel like their voices are heard.

“I’m from a family of five kids, so very much used to the large groups, how do we make a large group decision? And I do not like closing the door and then being an island,” he said. “If you’ve got to bully ideas through a caucus, they’re probably not good ideas.”

Many Republican priorities will stay the same in 2023, Demuth and Johnson said. GOP lawmakers will work to send surplus funds back to taxpayers, boost funding for local law enforcement, seek to increase penalties for repeat violent offenders and those who distribute fentanyl, and raise questions about fraud and abuse in public programs.

After working together on the Senate Judiciary Committee, Johnson and incoming Senate Majority Leader Kari Dziedzic, DFL-Minneapolis, said they were hopeful.

“We’ve talked a few times here, and we both agree that we want to, we want to make this work,” Dziedzic said. “And so we’re going to, you know, try to make it work, have honest conversation, open conversations to do what is best for Minnesotans.”

Johnson said he viewed Dziedzic as a pragmatist and expected that she and others would seek advice from GOP lawmakers.

“I’m hoping that through this process she’ll be asking our members what’s palatable in our districts and how can we move policy forward that maybe we have some differences on, but what can we do to make that better for our district?” he said.

With women set to lead three of four caucuses at the Capitol for the first time in the state’s history, many are expecting a change in tenor.

Amy Koch was the first and only woman to serve as a GOP caucus leader before Demuth was chosen. Koch, who was Senate Majority Leader in 2011, said she’s thrilled to see Demuth, along with Dziedzic and House Speaker Melissa Hortman, take the helm.

“It just feels like we’ve reached a critical mass where finally it might just be normalized – to have not just women in leadership, but women that will run, and I do think it will make a difference,” Koch said.