News
spotlight
Northfielders use chalk to spread a message of social justice
By SAM WILMES swilmes@northfieldnews.com

Hannah Hamalian writes the names of the people of color who were killed by police during a portion of 2019. (Sam Wilmes/Northfield News)

Northfielder Wendy Placko writes the names of the people of color who were killed in police during the first six months of July 2015 in chalk Friday in Bridge Square. Placko was one of approximately a dozen people who showed their support for African Americans who have been killed by police. (Sam Wilmes/Northfield News)

A main reason for writing the names of the dead in chalk was to call attention to them as individuals and show the incidents as a pattern of systemic racism they say is perpetrated against people of color. (Sam Wilmes/Northfield News)

The names of those killed in police-related incidents took up a considerable portion of the concrete center of Bridge Square Friday morning. Although the work will likely disappear over the coming days, organizers hope to continue writing the names to call attention to what they say is needed police reform. (Sam Wilmes/Northfield News)

About a dozen Northfield residents took to Bridge Square Friday morning. Using chalk, they wrote the names of African Americans who have been killed by police since 2014.

In those names, the artists saw evidence of police brutality and a system that is inherently unjust to people of color.

Although their work will likely only show for a few days, they plan to soon come again. They believe the continuous process is a way to consistently remind people of the importance of remembering the individual names of the dead to spark a movement for a more just future.

“We’re here today as a group, not about any of us individually, but as a group within Northfield to try to bring some awareness of what has been going on in the world in terms of police violence,” said Northfielder Hannah Hamalian.

“I see it as my role to bring this to the attention of people,” added organizer Cecilia Cornejo.

One of the most recent incidents was the death of George Floyd in police custody May 25 in Minneapolis. Former Minneapolis Police Officer Derek Chauvin has been charged with second- and third-degree murder and second-degree manslaughter in Floyd’s death. The incident sparked mass protests and riots throughout the U.S., along with calls to reform the way police operate and treat people of color.

Northfield organizers are undertaking other efforts to call attention to the issue. Activists are meeting from 5:15-6:15 p.m. Mondays at the intersection of the Fifth Street Bridge and Highway 3 to seek justice for African American lives lost to police brutality. A core belief of those assembled Friday is that white people share a responsibility in taking a deep look at how they are contributing to inequality, and speak out against perceived injustices. To some activists, not doing so is indicative of a system of white supremacy.

Hamalian believes oppression occurs when any group is de-humanized. Based on that, she said saying the names of victims is a way to end that destructive process. To her, the unjust system is everywhere— even if people feel like they can’t see it.

“The thing about racism is that it’s systemic,” she said. “So, racism happens when a system oppresses one group unequally over another, and in a country that was founded on slavery … it’s founded on genocide, it’s founded on all of these things. So even if someone is not intentionally seeking to unconsciously kill people because they are black, we live in a system that has this heritage, has this connection to what’s going on.”

One week after agreeing to develop a plan to close the Fourth Street Bridge to vehicle traffic, the Northfield City Council opted to keep driving lanes open and temporarily add pedestrian walking lanes on both sides.

The measure passed by a 4-2 vote. Councilors David DeLong and Brad Ness voted no.

The council’s decision means walking lanes and ramps will be temporarily added to both sides of the bridge in between the current sidewalks. A physical barrier would separate pedestrians and motorists.

The council took action Tuesday after becoming aware that people were blocking the sidewalk, not wearing a mask nor keeping a proper social distance to combat COVID-19. Supporters said their goal was to allow for a safer pedestrian environment in the area.

In voting no, DeLong questioned the feasibility of limiting the width of vehicle traffic. He added social distancing adherence remains inconsistent downtown and therefore wondered why the city is focusing on changing the landscape of the bridge. Instead, he called for people who are fishing on the bridge to use other areas surrounding the river to ensure pedestrians can safely cross.

Councilors Jessica Peterson White and Erica Zweifel, who both supported the plan, said there is a difference in safety between stepping from the sidewalk into a parking space on Division Street compared to a traffic lane on the bridge.

Peterson White said it was hard to understand how narrowing the driving width would create a hazard, noting an engineer who has seen the plans expressed no safety concerns. She added she was grateful for public feedback on the proposal to close the bridge, adding she would have not supported the bridge closure if she would have been aware of how much of Fourth Street they were planning to close.

“This is a great compromise,” Peterson White said. “I hope that this is a start to a longer-term solution.”

Public Works Director David Bennett said the reduction in the width of the driving lanes will reduce speeds and therefore limit the number of serious crashes in the area. Zweifel said speed still needs to be considered and suggested the city consider implementing a temporary crosswalk on the west side of the bridge. She requested the city close the bridge for Riverwalk Market Fair events.

“I received verbal support from Chief Franek for the plans the City Council ended up approving last evening including the temporary pedestrian lanes on the bridge,” Martig said. “Chief Franek was provided the detailed street closure plans provided by the Engineering Department of the city. Emergency vehicles are certainly necessary to be maintained through these changes and we’ve made provisions will ensure safety and security to life and property.”

Zweifel said her constituents, by a 6-to-1 ratio, supported closing the bridge but didn’t believe the measure had enough council support to continue moving forward.

City officials plan to continue evaluating the possible impact of the loss of deliveries to nearby shops and restaurants.

In a statement submitted electronically before the meeting, Northfielder Bobbie Lowthorp said the bridge should stay open as businesses continue to recover from COVID-19 induced closures and the ensuing economic turmoil.

“Bicyclists and pedestrians have many options ⁠— a town full in fact,” she said. “Fishing enthusiasts as well have other options, albeit not as convenient. I vote against prioritizing convenience and preferences over the livelihoods of local business owners and their employees.”

“Safety is most important, and access to local businesses is vital,” Weiss said. “Signage that fishing from the bridge could be dangerous sounds like a better option.”

Anderson urged the council to make pedestrian improvements to the Fourth Street bridge, and expressed support for the action councilors eventually took.

“The COVID-19 pandemic and social distancing recommendations have highlighted how unsafe crossing this bridge can be for pedestrians, and particularly for those in wheelchairs,” he said.

The council also unanimously opted to close Water Street from Bridge Square to the bridge. Precast concrete barriers are being evaluated to alert drivers to the closing. The area could be used for picnic tables and is expected to allow for greater social distancing.

Both changes are expected to be in place until at least Aug. 7. The City Council is scheduled to make a decision on whether to extend the closings during its Aug. 3 meeting. 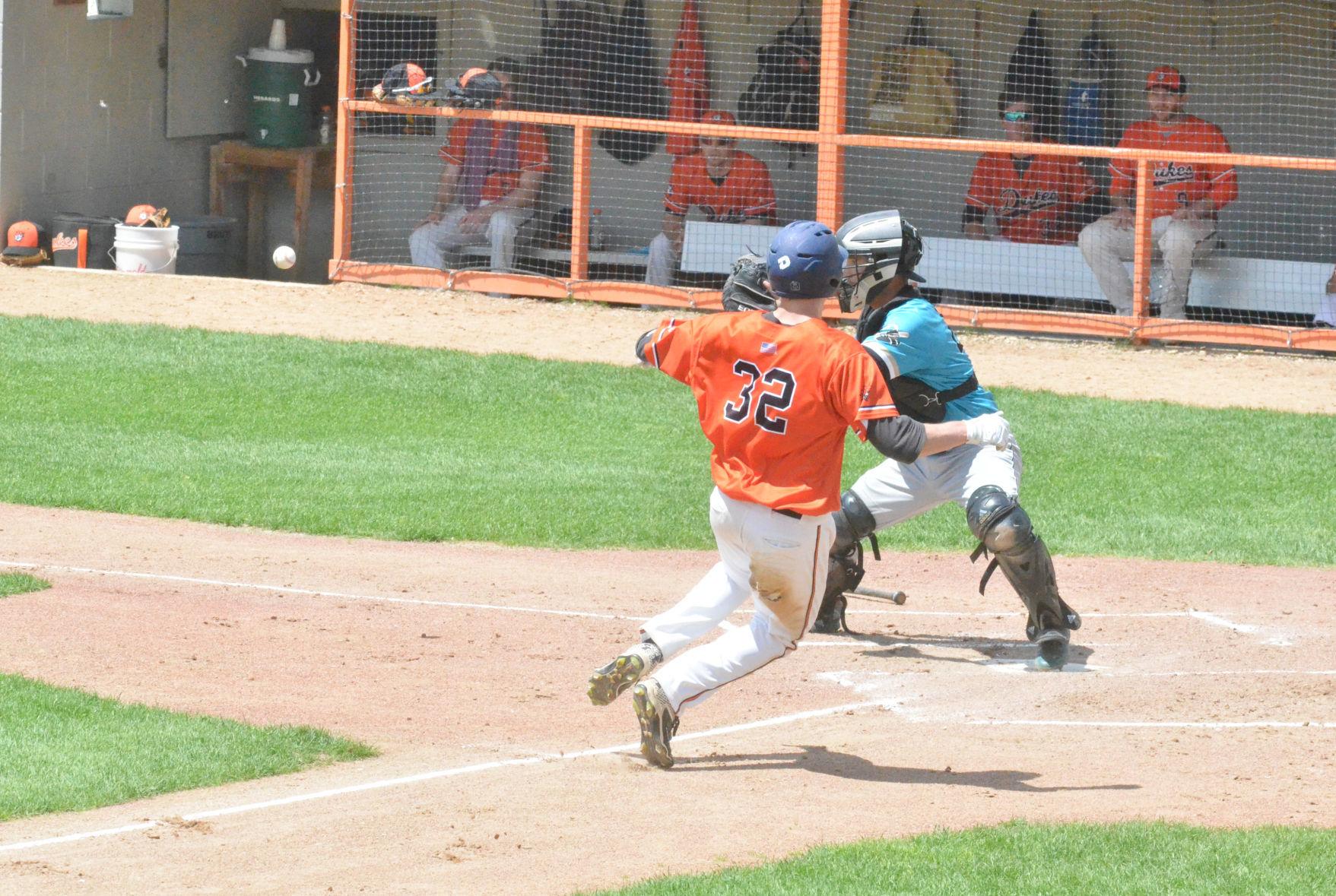 The schedule is set and the 2020 season will begin Wednesday night, with the Classic Cannon Valley League and Section 1B scheduled to start play Sunday afternoon. Dundas will travel to Hampton on Sunday, while Northfield will play its first league game next Wednesday at home against Elko. (File Photo)

A city working group is recommending the city begin the process of banning single-use plastics, including bags, cups and containers. (Griffin Wooldridge/Upload)

According to a draft document, the plan is for city staff to seek an end for retail and restaurant sales shortly after the negative economic conditions precipitated by COVID-19 end.

The city could follow Brooklyn Center’s lead in eliminating the purchase and use of one-time plastic and styrofoam plates, utensils, cups and straws with city funds for all city buildings and activities. Current supplies are expected to continue to be used, and when new supplies are needed, alternatives will be sought.

Businesses will be consulted during the process. The program at first is expected to be voluntary.

“If we can do this in a way that can be simple and cost-effective for them, then I think they will support it,” said city Program Coordinator Beth Kallestad.

In the lead up to the recommendation, the subcommittee, tasked with focusing on materials and waste, researched what other communities are doing in regard to single-use plastics. The city’s Climate Action Plan includes an initiative to eliminate as much excess plastic as possible.

The draft document states if the cost to eliminate single-use plastics is too significant, Kallestad will seek a less costly option or make note of where those costs are. If that occurs, staff are expected to be able to, at least temporarily, go with the less sustainable option.

“It’s a good, tangible step, visible thing that we can work on,” Kallestad said. “Waste is a huge issue around the world, and we know that the recycling markets are not what they used to be.”

According to a United Nations report, nearly 50% of the plastic waste generated globally was from plastic packaging. However, state law prohibits cities from crafting ordinances to ban plastic bags, so cities that regulate single-use plastics typically impose fines and insist on educational activities to reduce use.

“Plastic pollution is harming wildlife and impairing ecosystems and landscapes all over the world, but it also has local impacts,” said Environmental Quality Commission Chairwoman Kim Smith. “Reducing plastic waste will help prolong the useful life of the landfill, reduce the city’s waste disposal costs, and reduce plastic litter.”

“Northfield businesses have the chance to take the lead on this issue by making the switch to recycled and compostable packaging sooner rather than later,” she said. “I think retail businesses in particular are going to find that better packaging isn’t a cost so much as a selling point.”