Students who participated in Art Night each sat at their own pottery wheels and used clay for their projects.

Tri-City United sophomore Kaia Krocack didn’t know what she was capable of creatively until she attended her first Art Night at TCU High School.

“I was kind of nervous about art night, because I felt that I was not very artistic,” Krockak said. “Once I got there, explored, and was around my friends, it was a very enjoyable time! I had a lot of fun and got to try many things that I haven’t done before, such as pottery on the wheel.”

Krocak was among 41 TCU High School students that participated in the annual Art Night after school on Friday, March 26. In the high school art room and Family and Consumer Science room, students chose among four different art activities for a diverse art experience.

“Art Night was a great experience and was an awesome way to relax and take a break from school work,” said Anna Barnett, TCU 10th grader who attended the event. “Each station was planned out very well and the food was amazing! I really enjoyed working with clay, which is something I don’t usually do.” 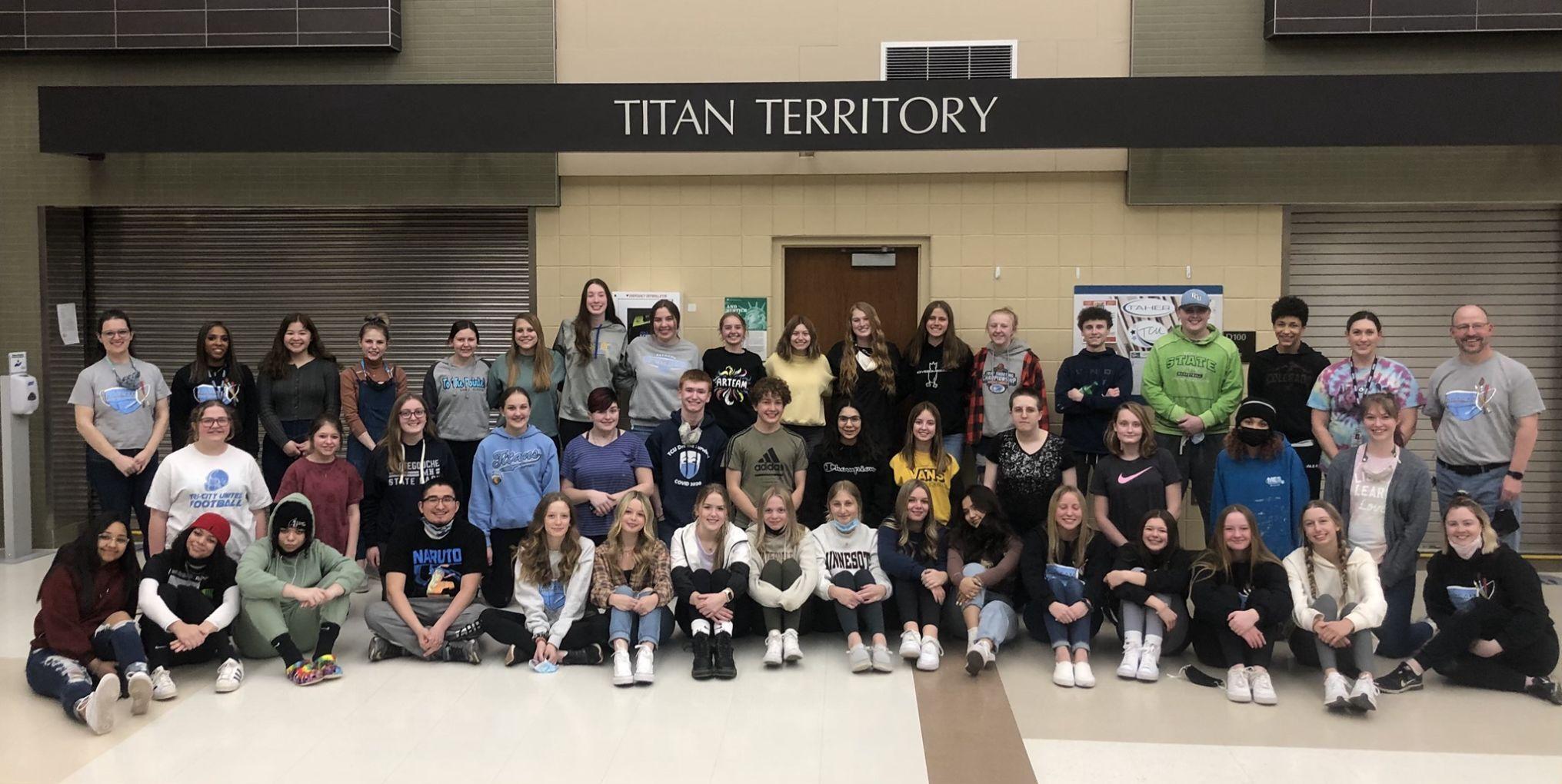 In the back of the art classroom, students got their hands full of clay as they experimented with pottery wheels. Under the instruction of TCU art educator Tony Barnack, students learned how to properly use the wheel and form their hands to create aesthetically pleasing pieces. 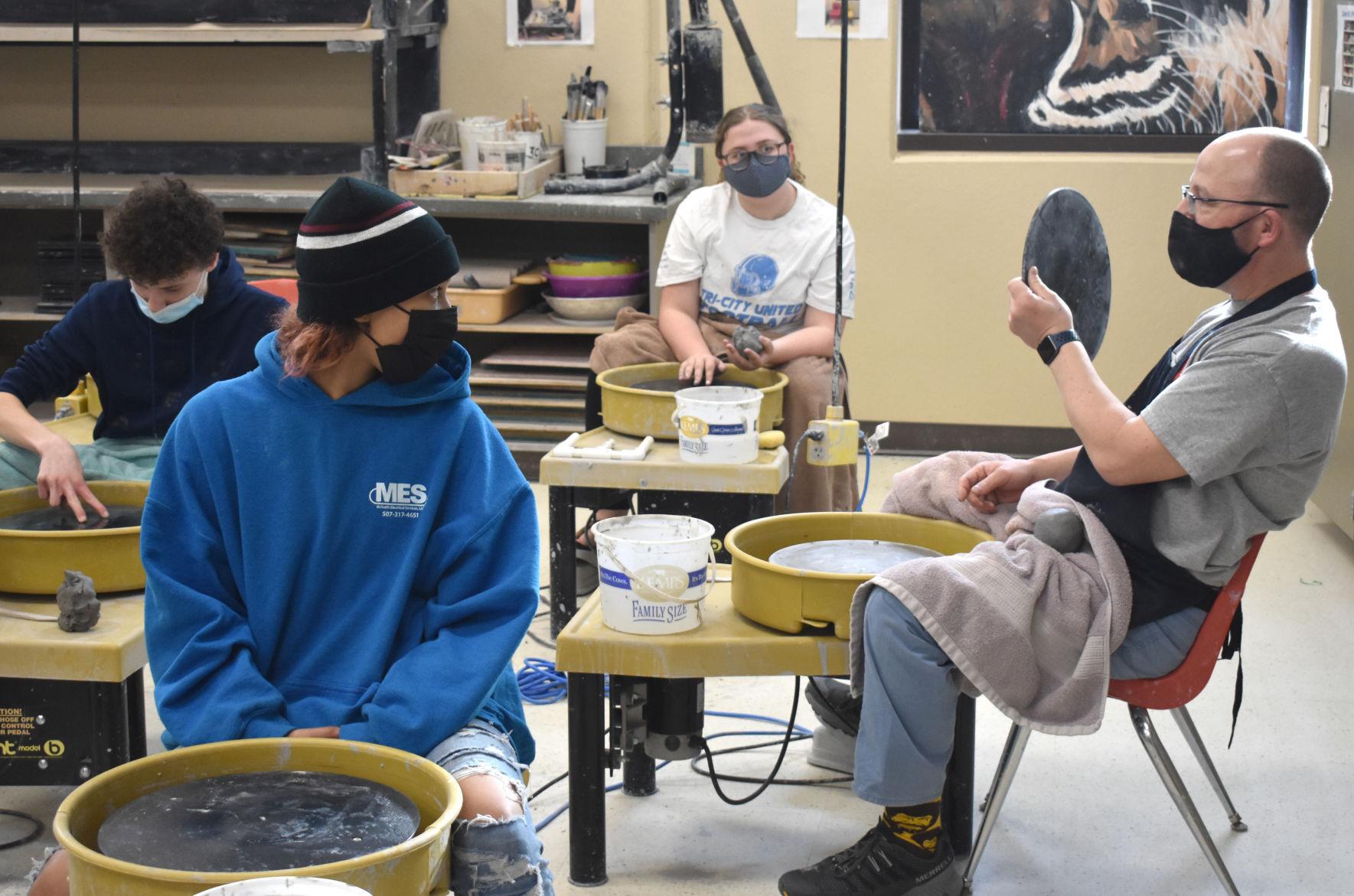 TCU art educator Tony Barnack holds up a pottery wheel and describes its functions to a class of Art Night students. 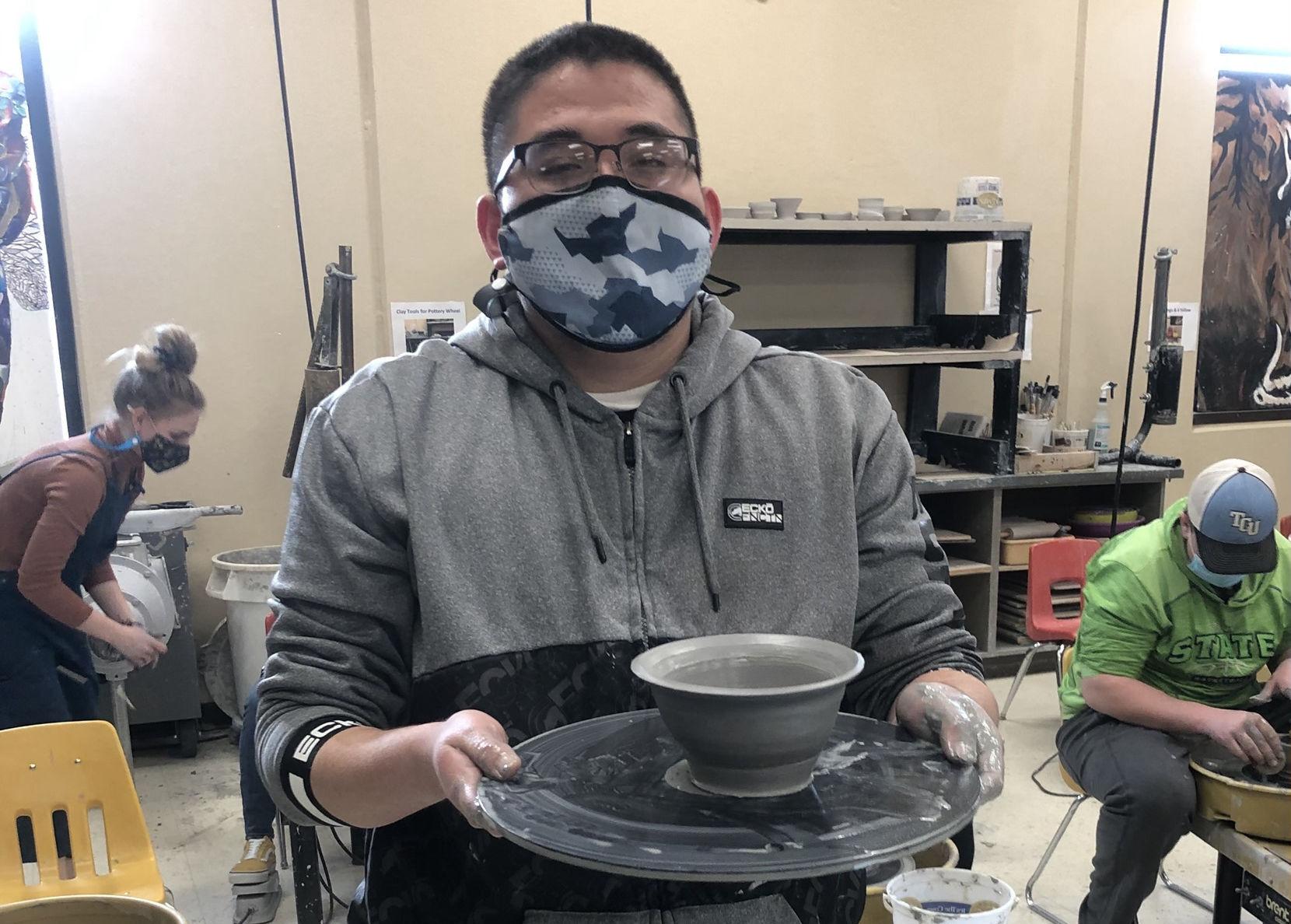 Right: Juan Reyes holds up the bowl he completed during the pottery portion of Art Night. (Photos courtesy of TCU High School)

Other students in the art room received a painting lesson from none other than Bob Ross by watching an episode of “The Joy of Painting.” Following the tutorial, these students created picturesque mountain scenes on canvases. Some students also used Art Night as an opportunity to work on their own paintings. 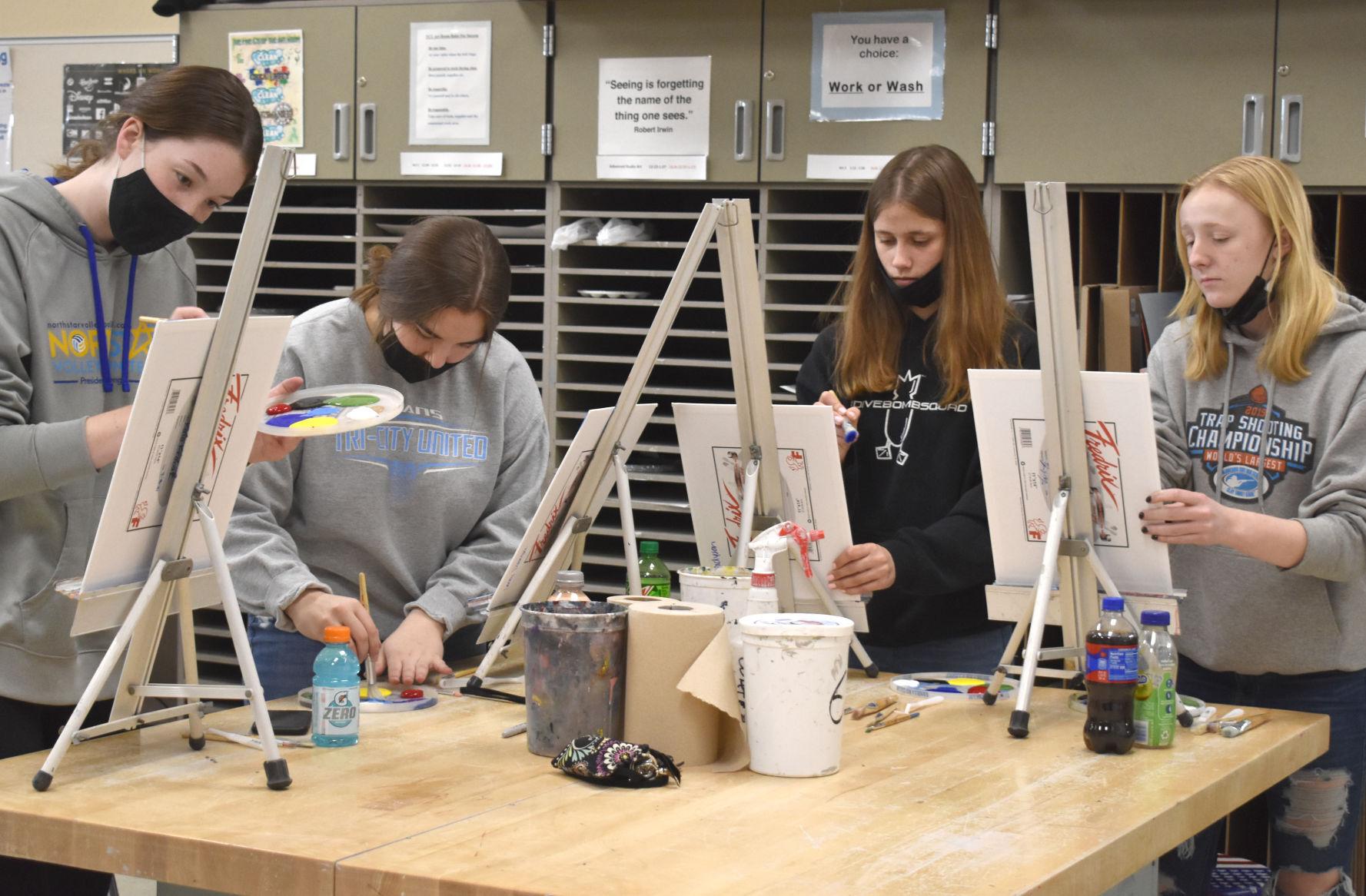 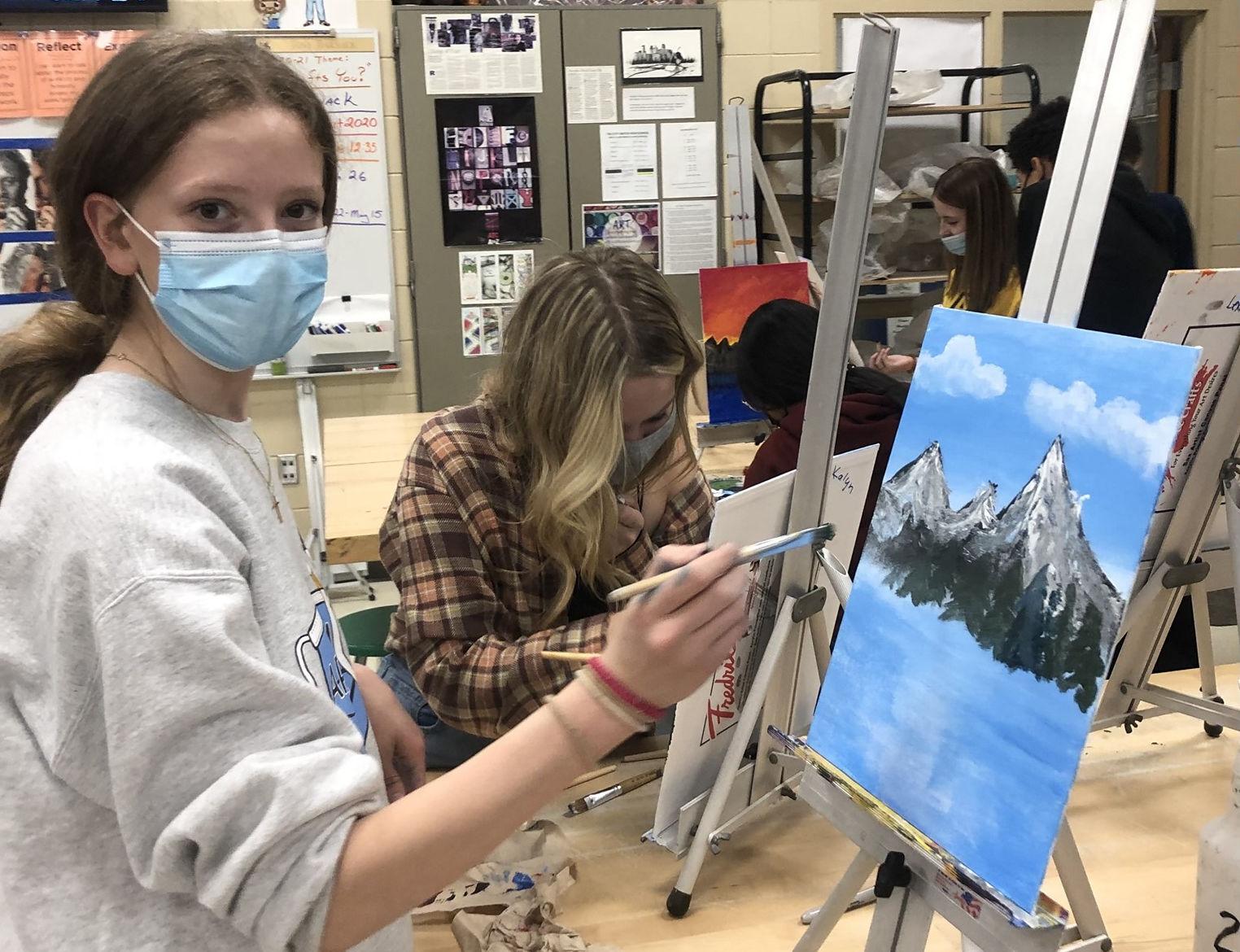 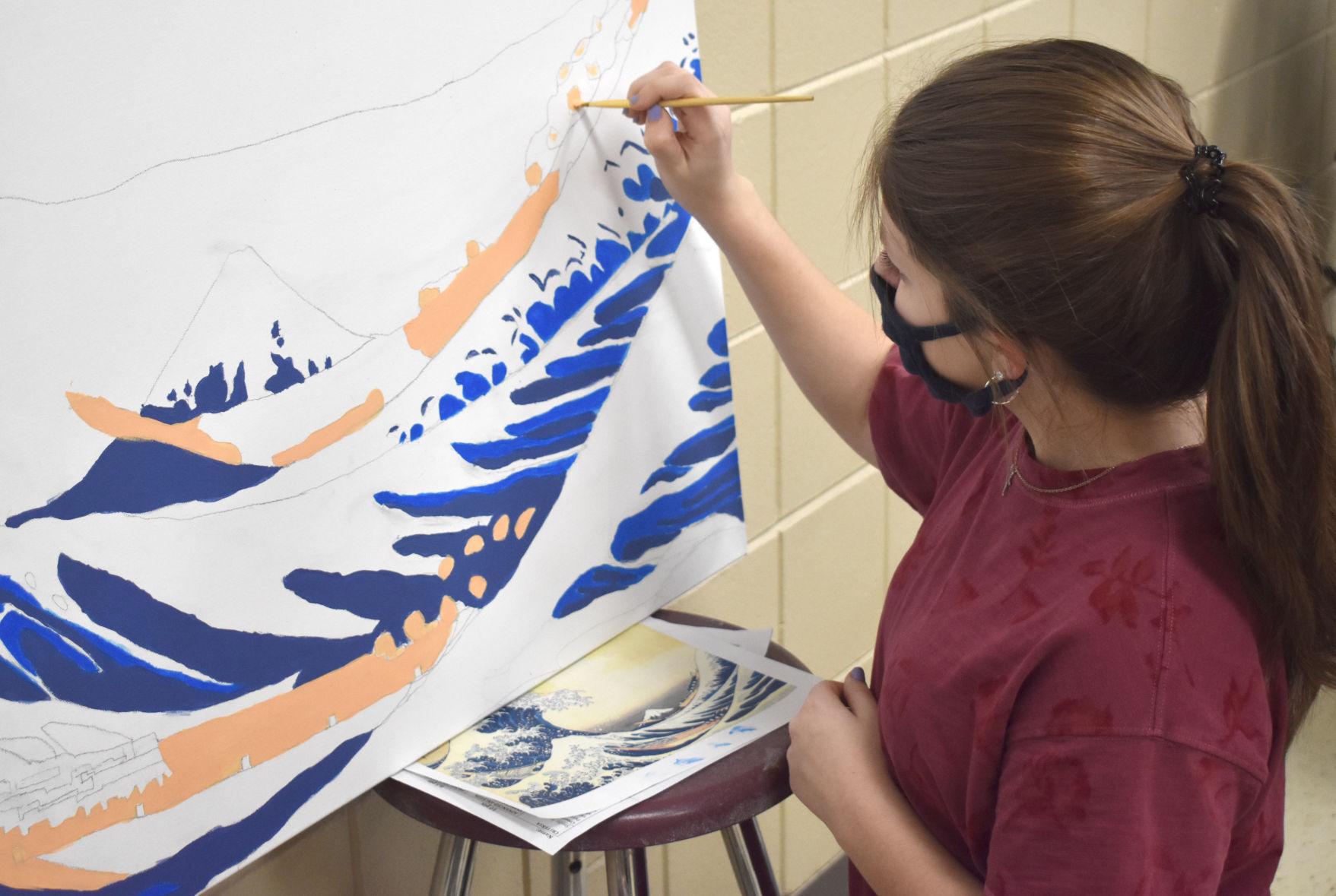 Some art students chose to use the Art Night to catch up on their own art projects. (Misty Schwab/southernminn.com)

In the FACS room, students began their art session by grabbing rubber bands and wrapping them around white t-shirts to tie-dye. As their garments soaked, they participated in another art method: sumi ink. 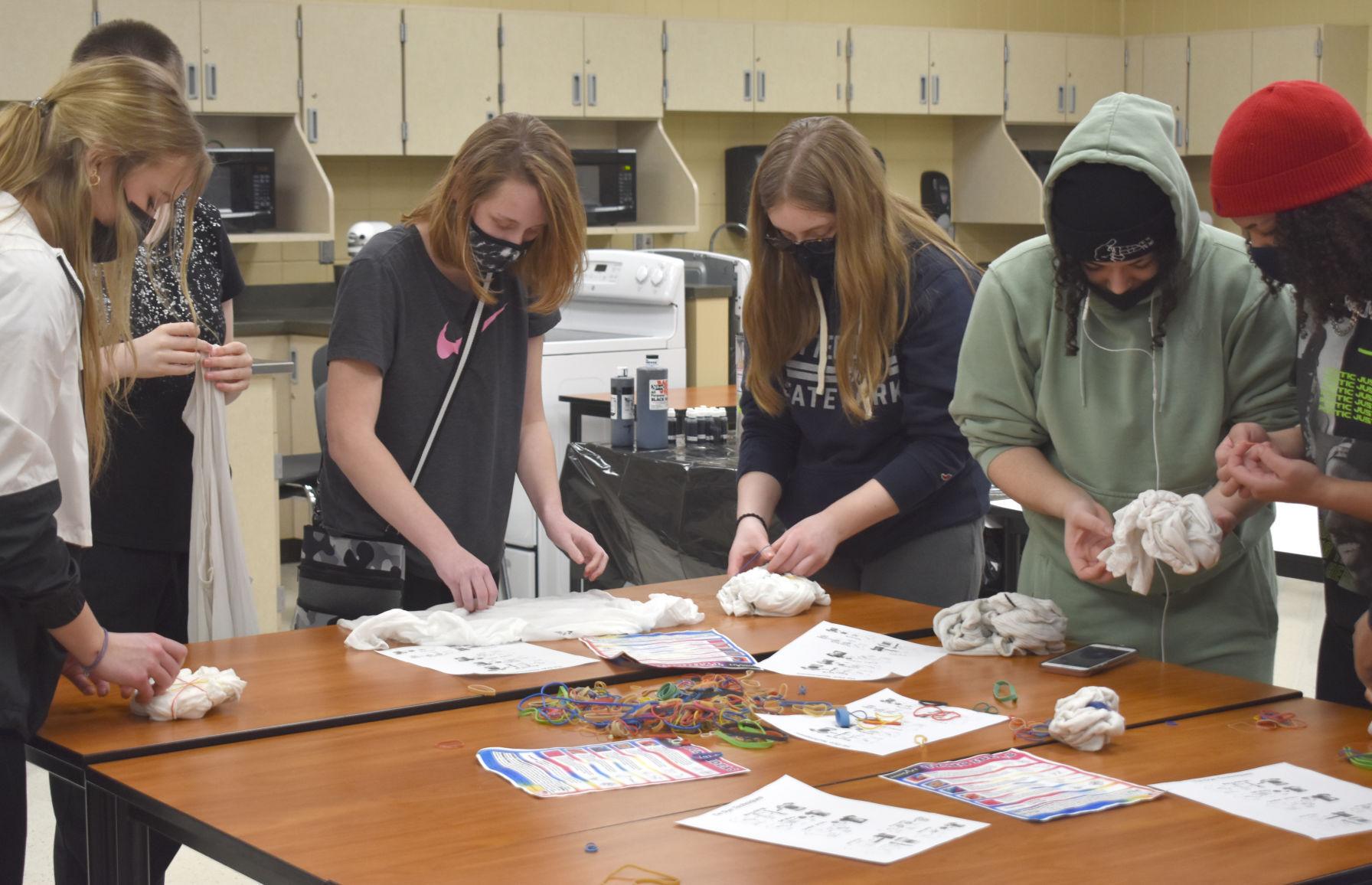 While watching a video about the Japanese calligraphy method, students tried it out for themselves. They used black ink and brushes to write their names and draw pictures on a long sheet of white paper. 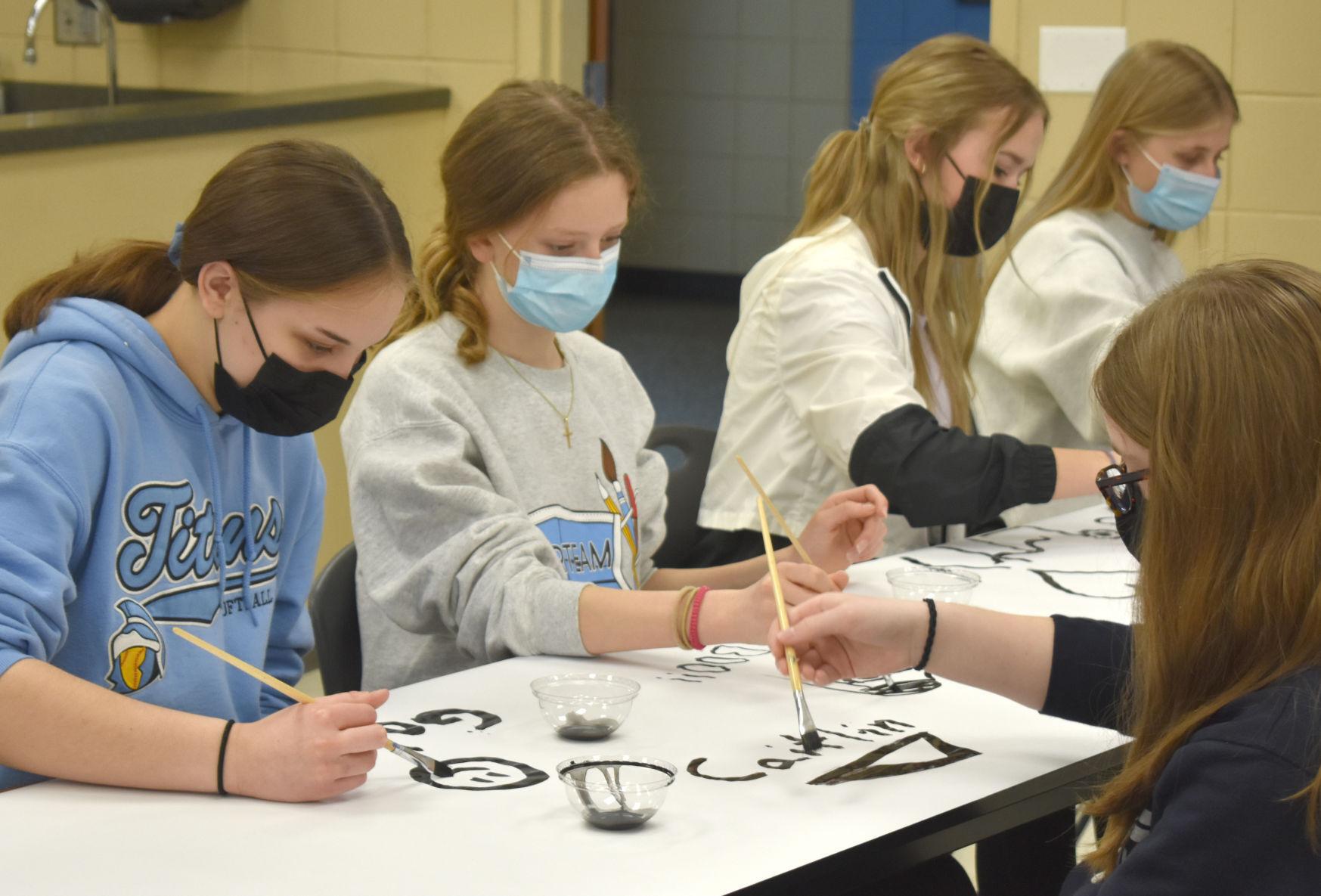 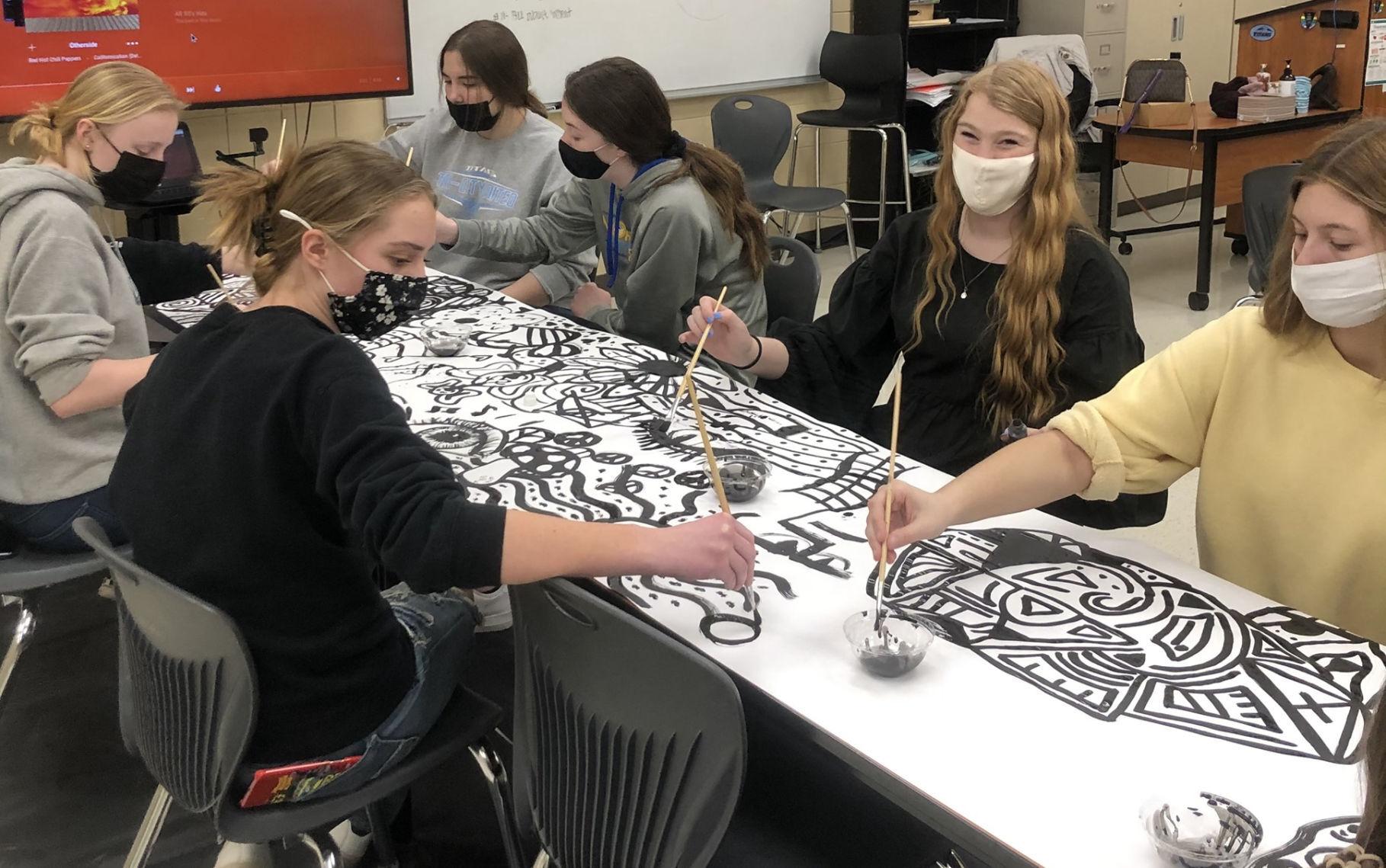 Art Night wouldn’t be complete without a dinner break in the TCU cafeteria. At 6:15 p.m., students feasted on a meal from Pizzeria 201 and took time to visit with one another.

“The night went well and by all accounts the students had a very good time,” Art Educator Tony Barnack said after the event. “I really feel it was the best TCU Art Night that we have had to date. Their attitude was awesome and their work was terrific!”

Despite the challenges pork producers have faced in the last year, with processing plants facing temporary closures and decreased production due to COVID-19, one thing that Dave Preisler says has remained constant was the production of an affordable and safe source of protein for customers, something producers will continue to do.

Overall, Preisler, Minnesota Pork Board and Minnesota Pork Producers Association CEO who lives in Le Sueur County, feels the pork industry has bounced back and that hog prices are favorable compared to past prices. While packing plants also experienced challenges last spring with COVID, Preisler says those numbers have dwindled.

Pork is a vital part of Minnesota’s economy. The state’s home to more than 3,000 pig farms, and ranks second in value and number of market pigs raised. This year, Preisler says, the industry will generate $3 billion in farm income. Looking at various agriculture products raised in Minnesota ranked in value, pigs are third, followed by cattle, milk and poultry. Corn and soybeans are ranked in the first and second spots, respectively.

Local producer Tom Sammon, of southwest Faribault, agrees that although there were definitely challenges in the last 12 months, the supply to the customer was almost non-interrupted.

Sammon, who has been farming for more than 50 years, says his family was lucky. They didn’t have to euthanize any pigs last year, though there were other producers that did.

The pork industry has bounced back, but in some ways the industry is still recovering. While the financial impact differed from farm to farm depending on the marketing decisions they had to make, the industry is seeing profitability now. Preisler said it looks like that will be the case now for the next several months, up to a year.

In Rice County, new and existing businesses have opportunities to receive free coaching and education and take advantage of a number of other resources without leaving their community.

Faribault and Lonsdale’s Chambers of Commerce recently worked together to get the word out about these opportunities for new and existing businesses at a Lunch and Learn event.

Over 30 were in attendance at the Lunch and Learn Tuesday at the Lonsdale American Legion. Sponsored by the Lonsdale Economic Development Authority (EDA) and catered by Smoke, the occasion gave business owners and employees an educational networking opportunity along with a free meal. 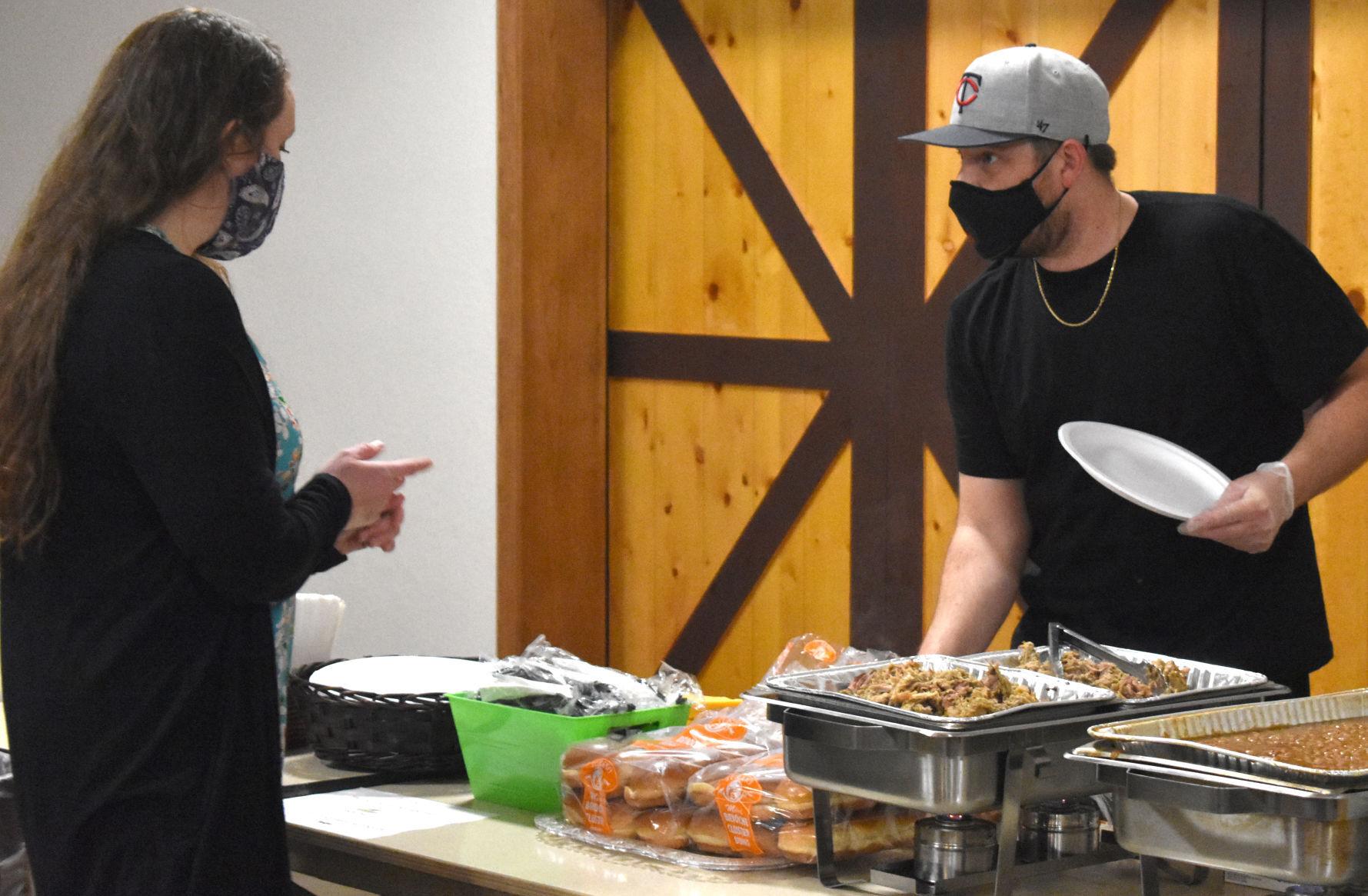 Smoke owner Andrew Rasmussen serves up a plate of pulled pork to Maggie Stensaas of New Frontier Farms at the Lonsdale Chamber of Commerce Lunch and Learn. (Misty Schwab/southernminn.com)

A survey of Lonsdale’s Business Retention and Expansion (BRE) program members, conducted by the University of Minnesota Extension, indicated that Lonsdale business owners are interested in more educational opportunities. The Lunch and Learn was one way for the EDA to respond to that feedback before July, when the U of M Extension can hold events in person again.

Bishop said SMIF has served 70 individuals since the inception of The Prosperity Initiative in 2015. Applicants who are selected receive six months of coaching based on three to five priorities they identify for their business. Sometimes clients work with three to four coaches during the six-month process, she said.

“The goal is to remove isolation,” Bishop said. “Most are in retail service, some innovative companies … food trucks, restaurants.”

SMIF is currently recruiting members of the 2021 Prosperity Initiative Cohort with applications due April 30.

Johnson used the example of Jessica Prill, owner of the Fleur De Lis Gallery in Faribault, who came to the SBDC for counseling and now has an online presence to make her selection of art products available 24/7. The SBDC has also been working with businesses that have owners nearing retirement.

Johnson also spoke about SCORE, which stands for Service Corps of Retired Executives. Free of charge, SCORE offers confidential counseling services to small business entrepreneurs to help them start their companies, grow and succeed. Founded in 1964, SCORE has over 11,000 volunteers through the U.S. with 310 chapters nationwide.

Another opportunity for proposed and existing businesses is the Downtown Micro Grant program, currently offered to Faribault historic district businesses exclusively. Offered annually through the Faribault Main Street Program, awards range from $500 to $5,000.

“Every one of the businesses who got a grant in the last few years is still going,” Johnson said. “… We’d be so happy to share the process with Lonsdale, especially being in Rice County.”

Following the presentations and questions, guests introduced themselves by sharing their names and businesses along with information and updates about their services.

The next networking event offered through the Lonsdale Chamber of Commerce will be 7:30 to 8:30 a.m. at Tri-City United Lonsdale Elementary. Guests will share a light breakfast, meet with Superintendent Lonnie Seifert and TCU Lonsdale Principal Tony Johnson, and tour the school to learn about health and safety protocols implemented during the pandemic.

A BIT OF BUSINESS

More information about the programs Pam Bishop and Nort Johnson discussed at the Lunch and Learn are available online.

Visit smifoundation.org/the-prosperity-initiative to learn more about guidelines and the application process for The Prosperity Initiative.

Request and appointment at the Rice County Small Business Development Center by going to faribaultmn.org/small-business-development-center.