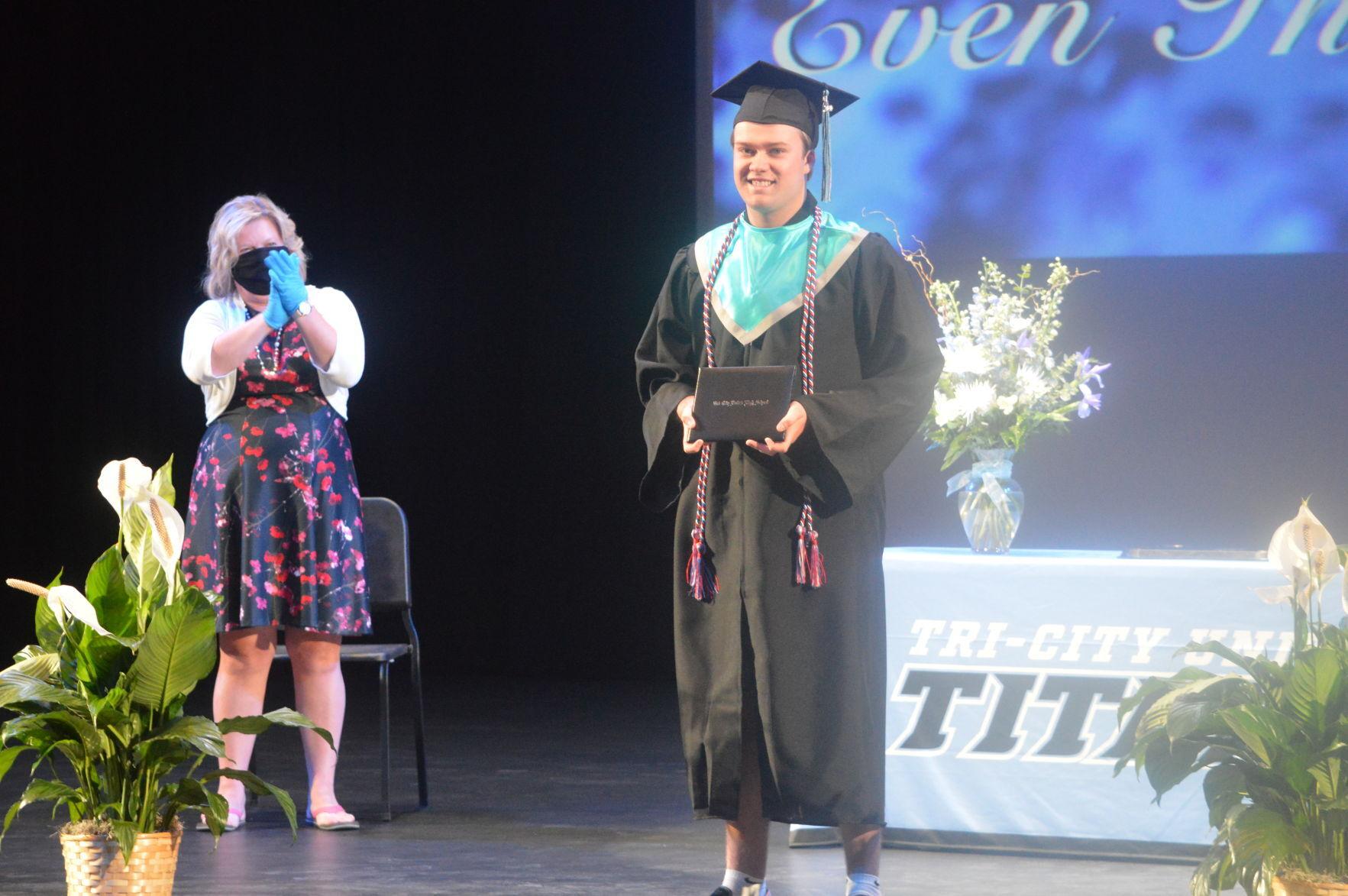 Turner Staupe receives his diploma on the TCU Performing Arts Center stage. Footage of TCU graduations receiving their diplomas will be edited into a graduation video by the district. (Carson Hughes/Le Sueur County News)

Despite the COVID-19 pandemic, the Tri-City United School District was determined to give its students an in-person graduation experience. However, health and safety guidelines from the Minnesota Department of Health prohibited schools from hosting a traditional graduation. Under the new restrictions, the district opted to give students a hybrid of an in-person and virtual ceremony to celebrate their scholastic achievements.

In a ceremony that lasted from 8 a.m. to 6 p.m. on Friday, May 29, each TCU student was given a 5 minute window to come on the Performing Arts Center stage and receive their diploma. Before they entered the building, each student was given a temperature reading and was given instructions by TCU High School Principal Alan Fitterer on how the ceremony would proceed. 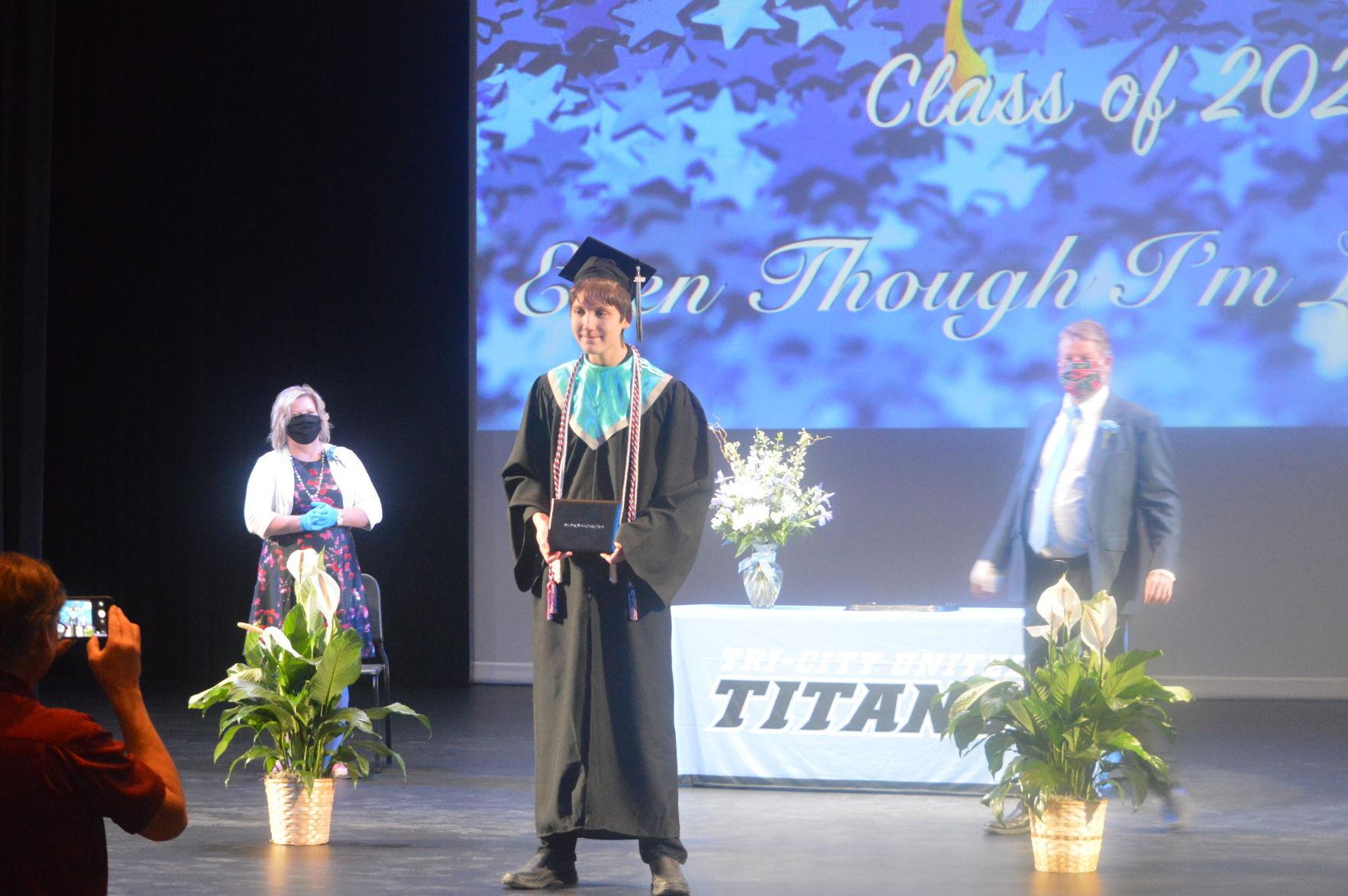 Benjamin Morris Heyda shows off his diploma. At TCU’s graduation experience, students had a five minute bloc to accept their diplomas and have pictures taken by their parents and guardians. (Carson Hughes/Le Sueur County News)

Each graduate then received an introduction and walked on stage to pick up their diploma from a table center-stage which was disinfected between students. The seniors would then show off their diploma, as their parents took pictures from the auditorium and and a group of school administrators shared the stage to applaud the graduates accomplishments.

After leaving the stage, students were guided to an area where they could have professional photos taken. Graduates also had the opportunity to drop off supplies they used for distance learning.

To create a cohesive graduation experience, the Tri-City United School District plans to edit footage of seniors receiving their diplomas together to produce a graduation video. The footage will be set to “Pomp and Circumstance” and will feature student speeches and messages from TCU administration. The video will be shared so that all students may see it. 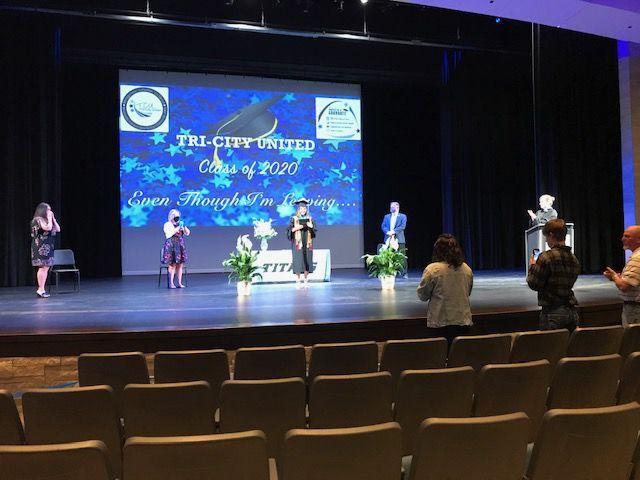 Sophie Franek receives her diploma on the TCU stage. The area was decorated for graduation, with the seating area reserved for parents and guardians to take pictures. (Photo submitted by Chad Johnson)

While Tri-City United was able to give students a graduation experience with some creative thinking, the district still hopes to offer seniors a more traditional experience. If public health guidelines allow it, the school will host an official cap toss in the football bleachers on July 15.

Rain accompanied Lonsdale Community Day last year, but the event for 2020 won’t take place no matter the weather. For the protection of the community during the coronavirus pandemic, the Chamber of Commerce decided to cancel the annual festival. (News Review file photo)

The annual Lonsdale Community Day Festival scheduled for August this year has been canceled due to the current coronavirus pandemic.

Chamber Executive Director Shanna Gutze-Kupp posted a June 2 press release confirming the cancellation was made “after much deliberation and careful monitoring of the current situation.”

“Although we originally hoped it would be possible to bring you the festival on Aug. 8, the ongoing uncertainty regarding the COVID-19 pandemic has made this timeline no longer possible,” Gutzke-Kupp wrote in the press release. “This decision has been extremely difficult to make, but the safety of our fans, community, vendors, volunteers and staff is always our top priority, and nothing will ever take precedence over your well-being.

“We understand the disappointment this cancellation will bring to our vendors, sponsors, businesses and visitors but we need to make decisions on what we know today and not what we ‘hope’ will happen. It’s challenging and complex however, we know it’s the right thing to do. We will forward all sponsorship and vendor fees to our 2021 event.

“Thank you for your patience and understanding as we navigate these unprecedented times. Please stay safe and healthy, so we can reunite with you Saturday, Aug. 14, 2021. Continue to visit lonsdalecommunitydays.com with updates.”

Traffic incidents in Lonsdale dropped from 1,556 to 930 in 2019. Police Chief Jason Schmitz believes increasing the speed limit from 55 to 60 miles per hour contributed to the change. (courtesy of Lonsdale Police Department)

Police Chief Jason Schmitz credits the decrease to a couple of factors, including the increased speed limit on Highway 19 from 55 to 60 miles per hour, which contributed to a decrease in traffic stops. There was also an increase in calls that required further investigation, said Schmitz, who reported these numbers during the Lonsdale City Council’s online meeting Thursday, May 29.

In contrast, the Lonsdale Police Department responded to increased mental health calls, many of them young adults but also juveniles. An increase in sexual assault cases (from one in 2018 to six in 2019) was also reported. However, there was a decrease in calls related to domestic violence (a reduction of 29 in 2018 to 21 in 2018).

Traffic stops totaled 930 in 2019 with 303 citations issued. That’s a significant decrease from 2018, when Schmitz reported 1,556 traffic stops and 316 citations. Motor vehicle accidents increased slightly from 23 to 26.

Schmitz also reported on the most frequent response times: 10 p.m. marked a high point for 2019 with 5 a.m. the low point. Officers responded to calls Wednesdays and Thursdays more than other days of the week, the same two days when two officers are on duty.

Throughout 2019, Schmitz reported officers collectively participated in about 412 hours of hands-on/classroom training and about 200 hours of online PATROL training. That included about 25 hours of “use of force” and firearms training for each officer, 16 hours of first responder refresher and 11 hours of training on crisis intervention, conflict and community diversity.

As for updates on the police station itself, Schmitz said the department needed to replace a squad computer and updated the operating system to Windows 10 as an unforeseen expense. The building also saw water damage as a result of ice accumulating on the roof.

According to Schmitz, calls took a sharp decrease the first three weeks of the stay at home order, but mental health calls and wellness checks increased.

During the online meeting held Thursday, May 28, the City Council also approved an amendment to the contract for fire service between the city of Lonsdale and Erin Township. The agreement means the Lonsdale Fire Department will increase its territory by 11 more sections (about 1 square mile) while terms and conditions remain unchanged.

The council previously discussed the request at its March 26 meeting earlier this year, during which Fire Chief Dave Pfluke explained that Lonsdale already provides 100% rescue service to Erin Township and fire service to 60% of the township. The Montgomery Fire Department covered the other 40% of the township, but the Erin Township board unanimously voted to request full fire service coverage from Lonsdale, which already responded to medicals in these 11 sections.

The Lonsdale City Council unanimously approved the amendment to the contract. Erin Township’s payment to the city of Lonsdale will increase by approximately $5,000, and the city’s cost share for the rest of 2020 will decrease by $2,000. 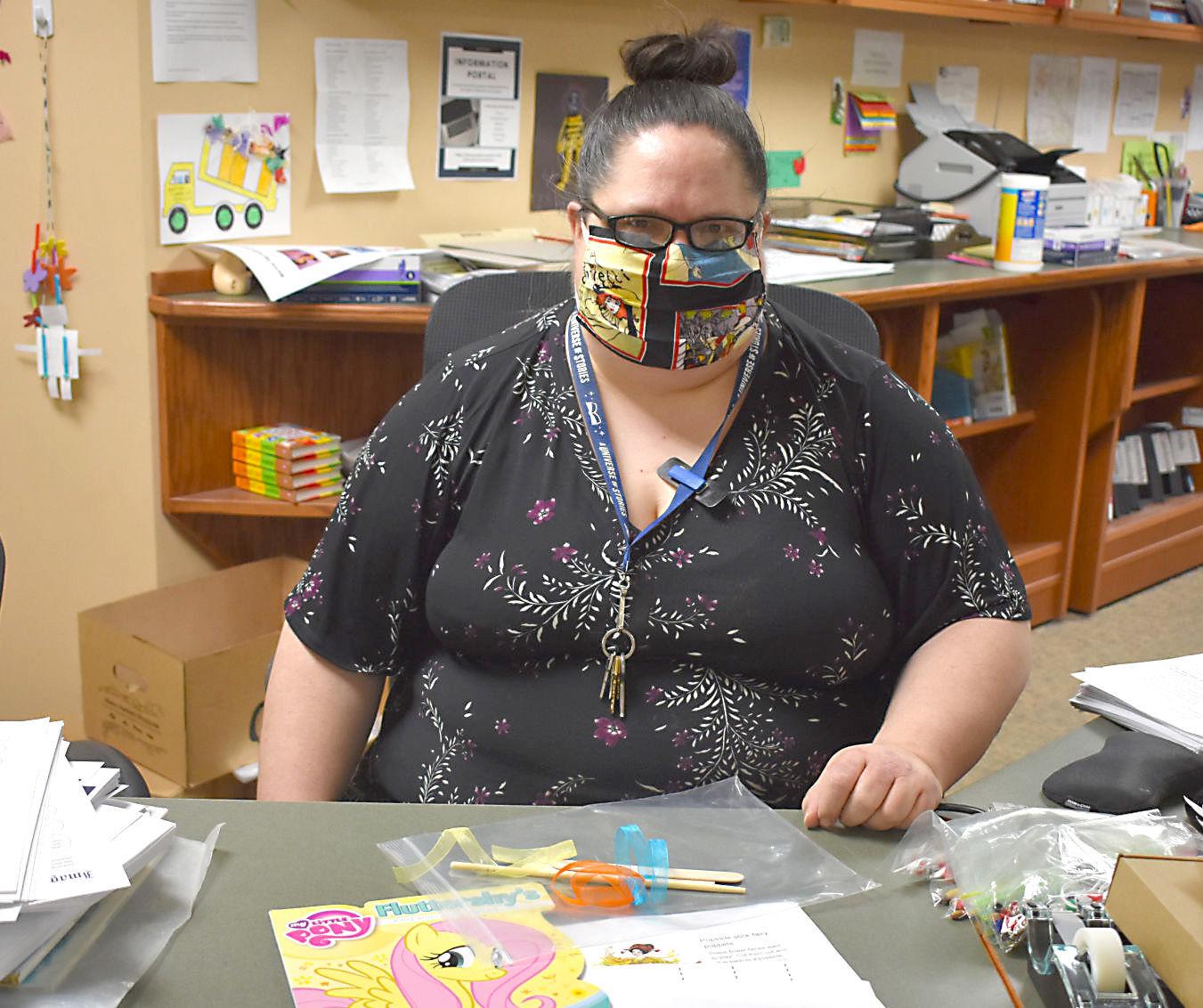 Lonsdale librarian Marguerite Moran is back at her desk as of June 1, when the library reopened after two and a half months. She’s pictured here with one of the activity bags patrons can pick up for at-home summer fun. (Misty Schwab/Lonsdale News Review) 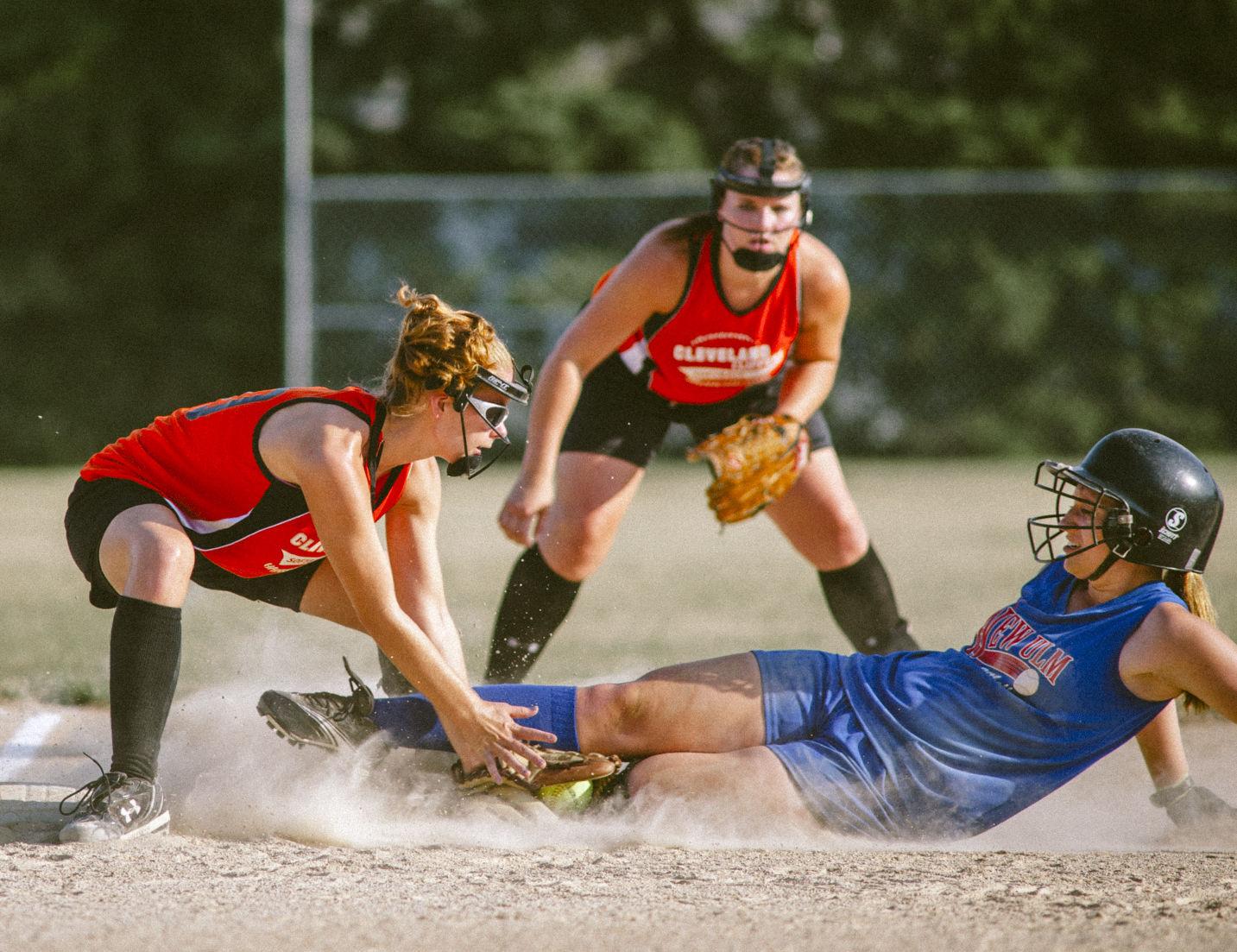 Softball is among the many things youth can usually do in the summer in Cleveland, St. Peter, Le Sueur, Le Center and other communities in the area. (Richard Rohlfing/St. Peter Herald file photo)