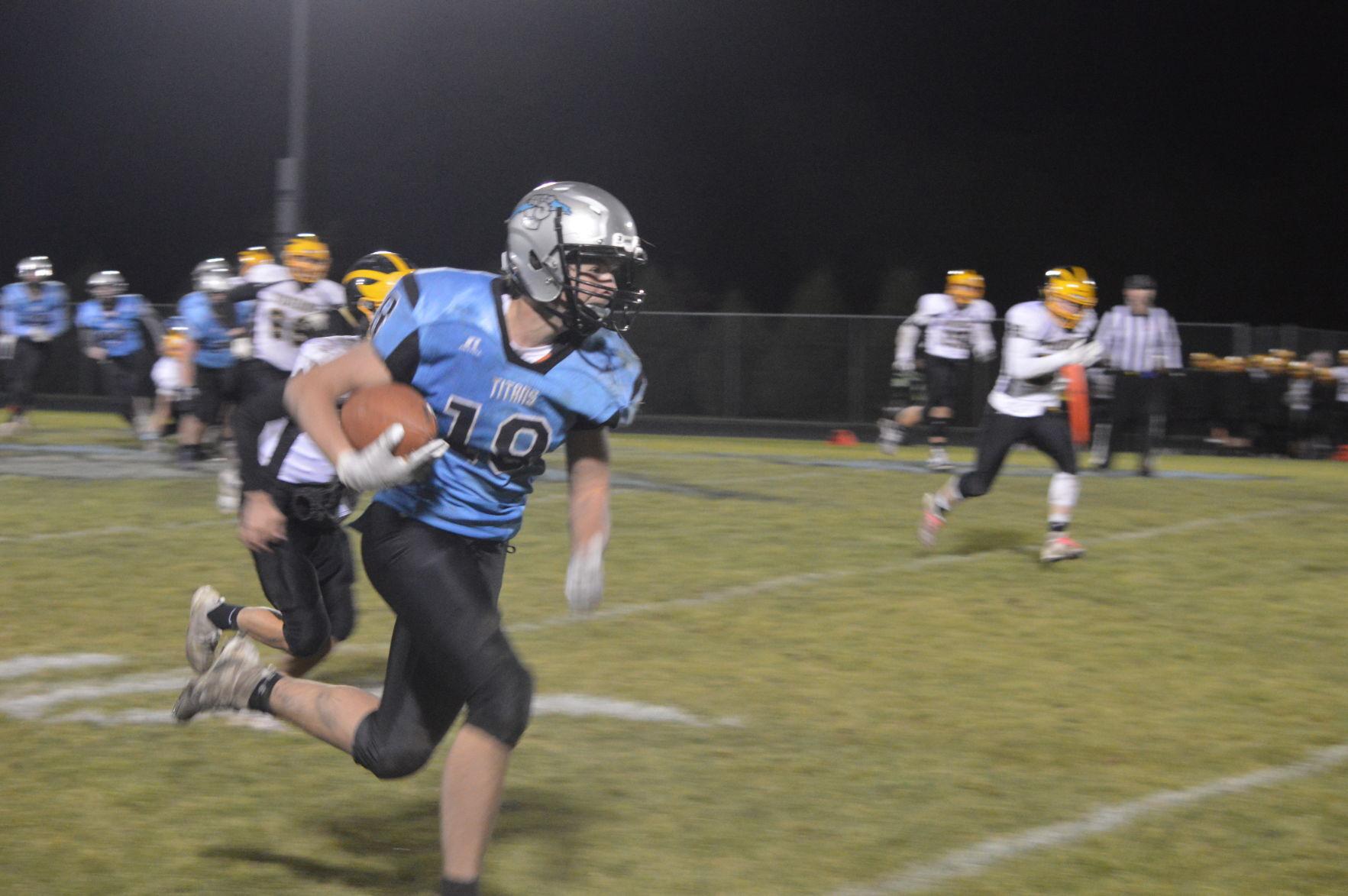 Lonsdale Food Shelf Executive Director Tami Heimer said her organization skills motivated her to pursue her volunteer position several years ago, but she’s preparing to pass off the torch as she plans her retirement. (Misty Schwab/southernminn.com)

Tami Heimer simply wanted to help stock shelves for the Lonsdale Area Food Shelf when it transferred to its current location in 2011, but she soon realized she had much more to give.

As executive director of LAFS for the past seven years, Heimer has devoted hours upon hours to keep the shelf organized, document client information, and gather input from the other volunteers.

Heimer said she cares about LAFS too much to leave before someone fills her position. She plans to train her predecessor before officially retiring, and she’s willing to hold out as late as June 1, 2021.

“The ultimate hope is it continues on,” Heimer said of LAFS. “I could see it growing in different ways from a new executive director than it has from me because we all have different ideas.”

Kathy Masters, a member of the LAFS Board of Directors and client service coordinator, will assume some of Heimer’s job duties such as ordering food and scheduling volunteers. Masters already took over some of those responsibilities in recent months, so Heimer said it was a natural fit. However, the shelf will still need an executive director to handle some of the software-related tasks.

“They’ve got some shoes to fill as far as replacing Tami, but it’s teamwork that’s number one in being an executive director,” Masters said of Heimer’s future successor.

Heimer’s regular involvement with LAFS began two years after the shelf opened. Howard White, who at that time served as pastor of Trondhjem Lutheran Church, received word that Lonsdale City Hall would no longer provide food shelf services. White then researched the need for a food shelf in Lonsdale and reached out to the community for support in starting one at its current location.

A group of parishioners, which included Heimer, met White at City Hall and helped box up and transfer the food to its new site. Heimer didn’t initially give much thought to volunteering with the food shelf beyond that request to stock shelves, but after her youngest son graduated from high school, she realized she wanted to do something meaningful with her free time. She served as president of LAFS for two years before advancing to executive director.

Heimer’s drive for organization fueled her interest in taking on the executive director role. She also enjoys working with computer software, so she began keeping digital records of the clients and food. Many aspects of LAFS have changed over the years, but she credits much of that to a team effort.

LAFS President Kathy Vosejpka said Heimer added a personal touch to the shelf with her “God-given talent to communicate and visit with people” as well as her ability to remember everyone’s name. Heimer has given “120%” in her role, said Vosejpka, networking with other food shelves through phone calls and group chats and staying updated on USDA (United States Department of Agriculture) parameters.

“I wish she wasn’t leaving because she’s going to be sorely missed, but any good leader gives it their all for a certain time, and someone else can take it and run with it and put their own stamp on it,” Vosejpka said. “I am appreciative for the years of service that she’s given to the food shelf.”

In recent months, Heimer said COVID-19 presented challenges for the food shelf as it did for other organizations. She and the board of directors needed to apply new ways to serve clients, first via a curbside pickup service and more recently with scheduled appointments. Although some volunteers were at first reluctant to introduce the appointment model, Heimer said it’s proven successful.

“I don’t know of anyone not happy to have client choice back,” Heimer said.

Heimer already retired from her part-time paid job in February, which has given her more time to spend with her grandchildren. After her husband retires, she plans to take ATV Club trips with him, do more traveling, and spend more time with her parents.

“This has been my life for 9½ years, and I’ve loved every minute of it,” Heimer said. “When you get hugs from clients, you go home feeling like you made a difference in somebody’s life.”

The Lonsdale Area Food Shelf continues to seek community members interested in filling the executive director position. Those interested in learning more about the volunteer hours and duties may contact LAFS President Kathy Vosejpka at 507-838-5383 or kmvosejpka@icloud.com. 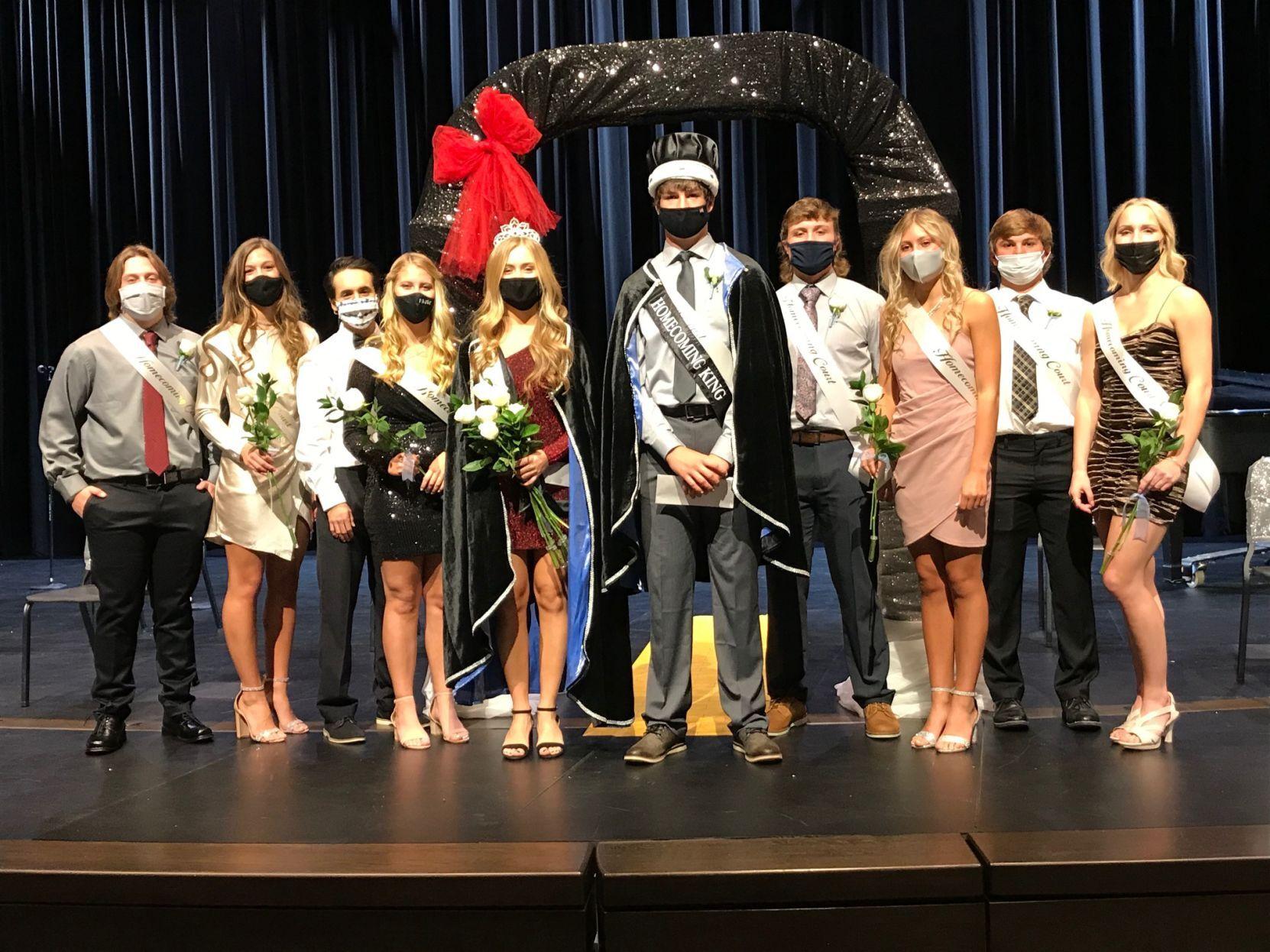 Step aside for the new Tri-City United Homecoming royalty.

TCU seniors Riley O’Malley and Annabelle Davies were crowned the 2020 Homecoming King and Queen on Monday, Oct. 19. The two seniors were one of 10 candidates to be celebrated at the coronation, including Isabelle Factor, escorted by O’Malley, Brody Rud, escorted by Davies, Jordyn Brownlee, escorted by Matt Rabenberg, Brooke Blaschko, escorted by Mason O’Malley, and Paige Johnson, escorted by Dan Lozano. 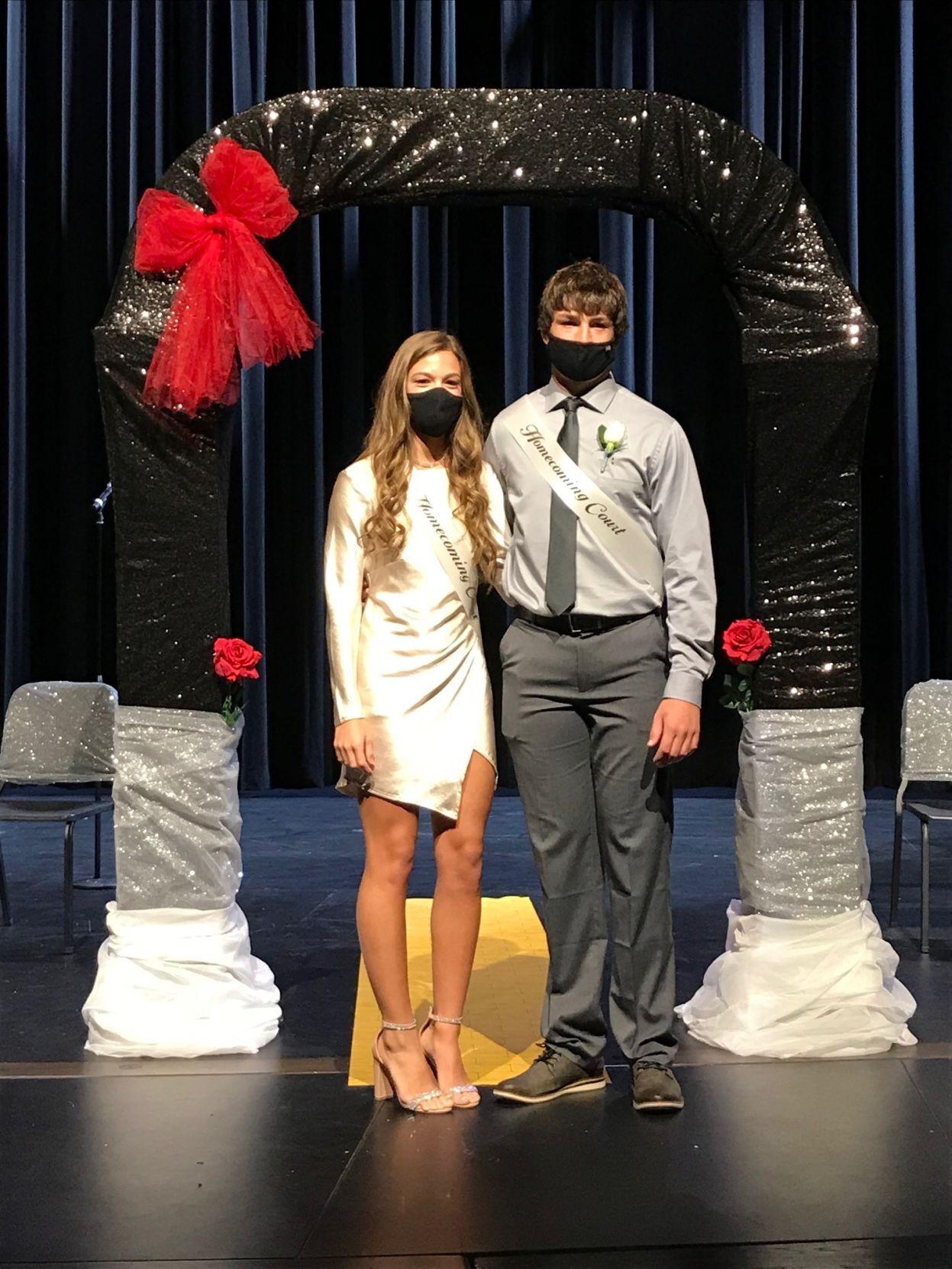 The coronation was livestreamed from the TCU Performing Arts Center over Vimeo and the Tri-City United High School Facebook page and is still available to watch. Math Teacher Anthony Haefs and senior Jack Erickson emceed the event, introducing each candidate as they through an arch frontstage. 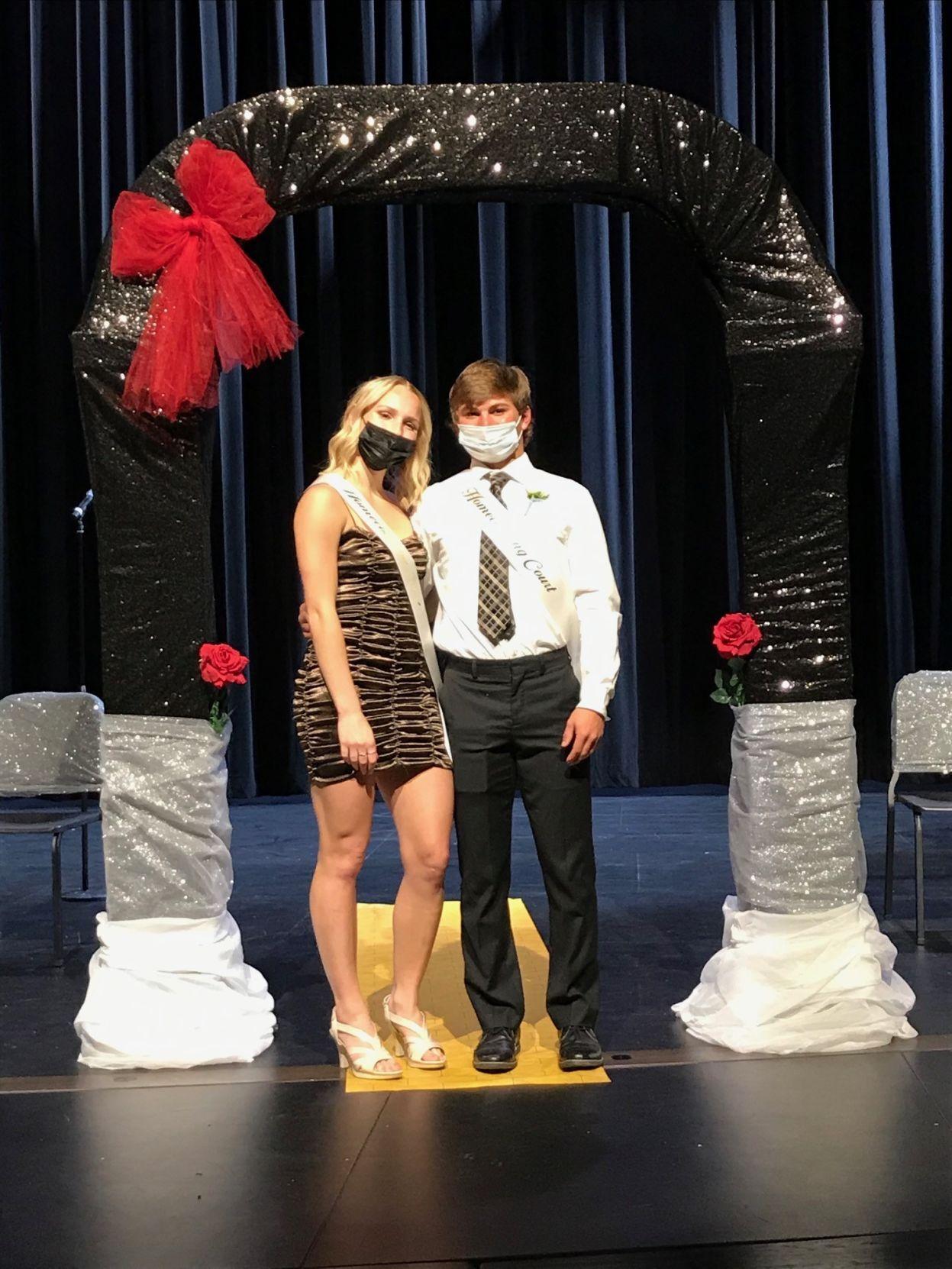 After introductions, the Tri-City United concert choir sang a rendition of “The Four Chords Song” a medley of pop songs that share the same four chords as the Journey hit “Don’t Stop Believin’.” 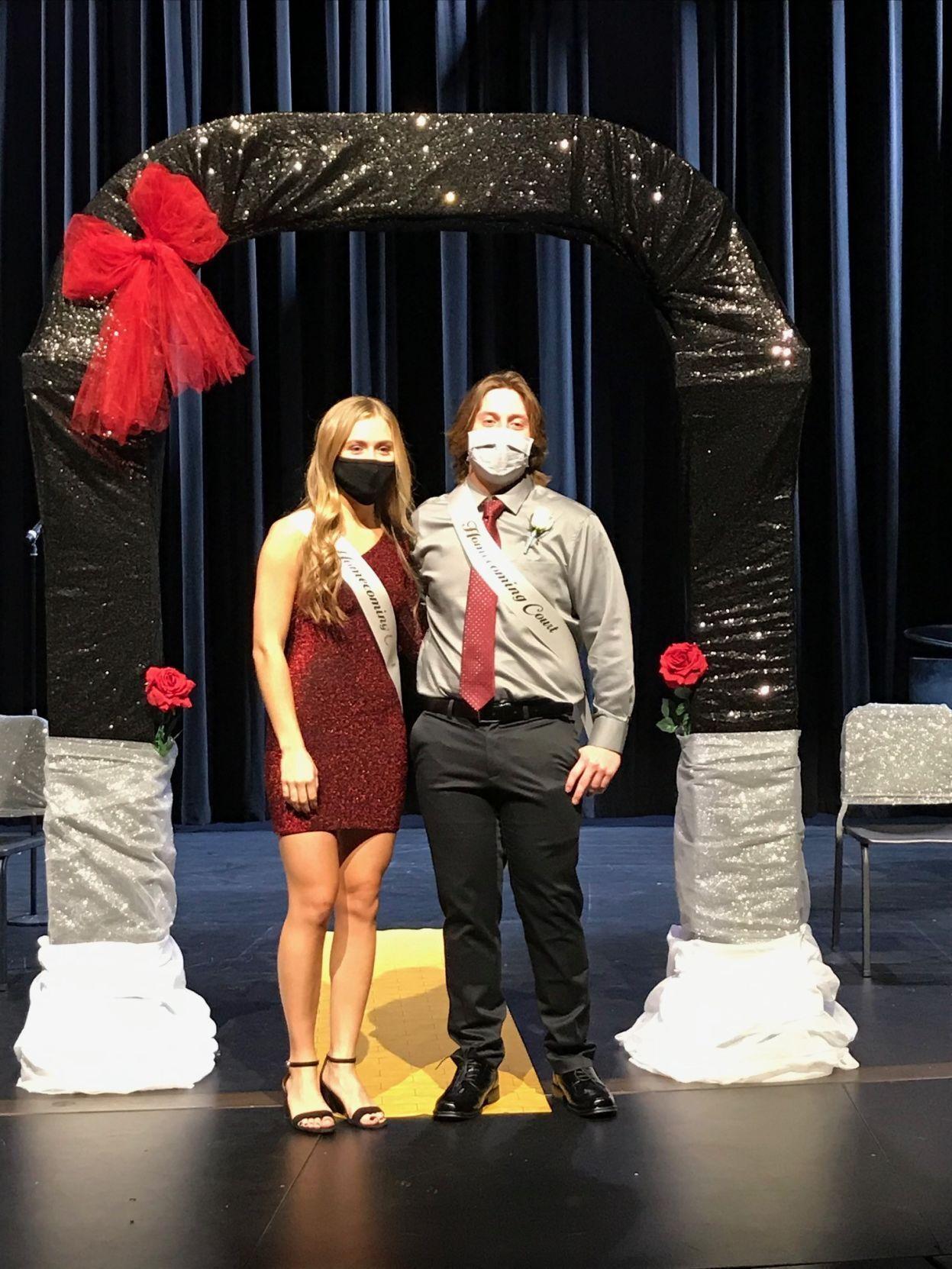 Last year’s candidates, Ryan Smith and Keilee Westlie were not available to attend the coronation, but sent a message to the candidates.

The ceremony ended as the emcees placed the Homecoming crowns onto the new king and queen, Riley O’Malley and Annabelle Davies. 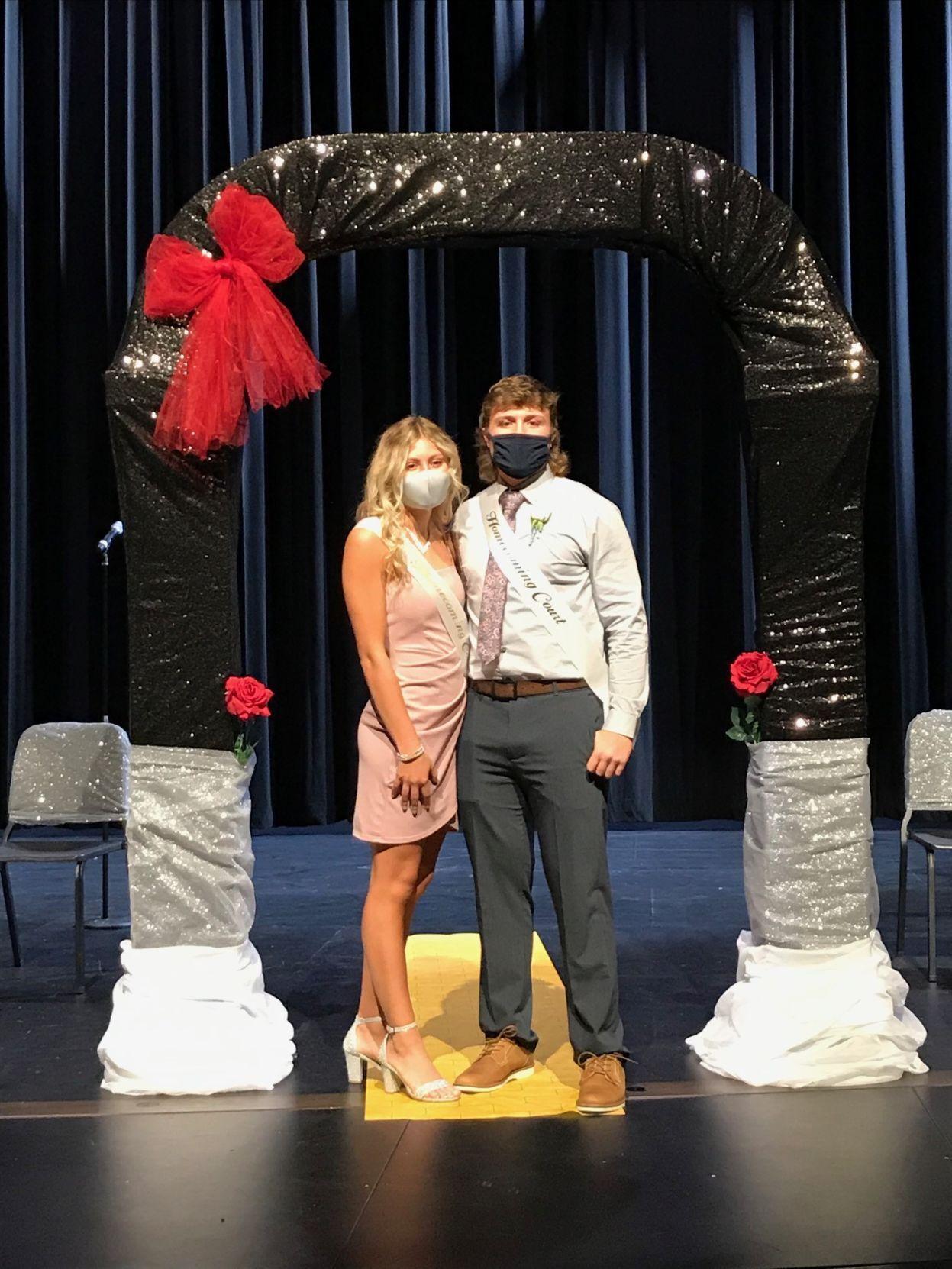 The socially distanced crowning event was limited to family members of the candidates and Tri-City United seniors. Candidates, the emcees, the choir and audience all wore facemasks. 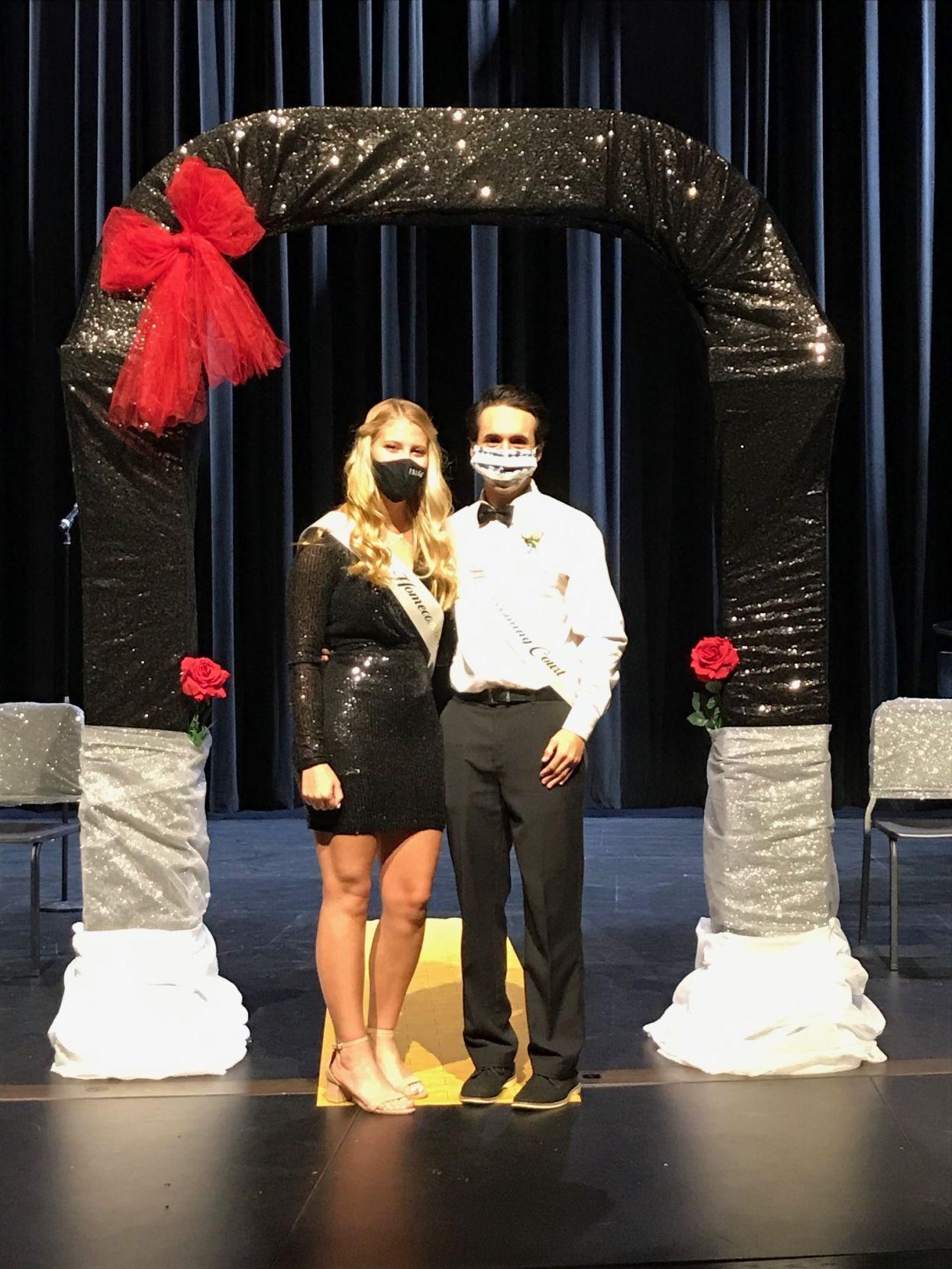 Tri-City United has many scheduled activities over the next week to celebrate Homecoming. On Tuesday, Oct. 20 and Wednesday Oct. 21 at 2 p.m., the school will hold a hybrid dodgeball tournament. The B group tournament will be on Tuesday and the A group on Wednesday. 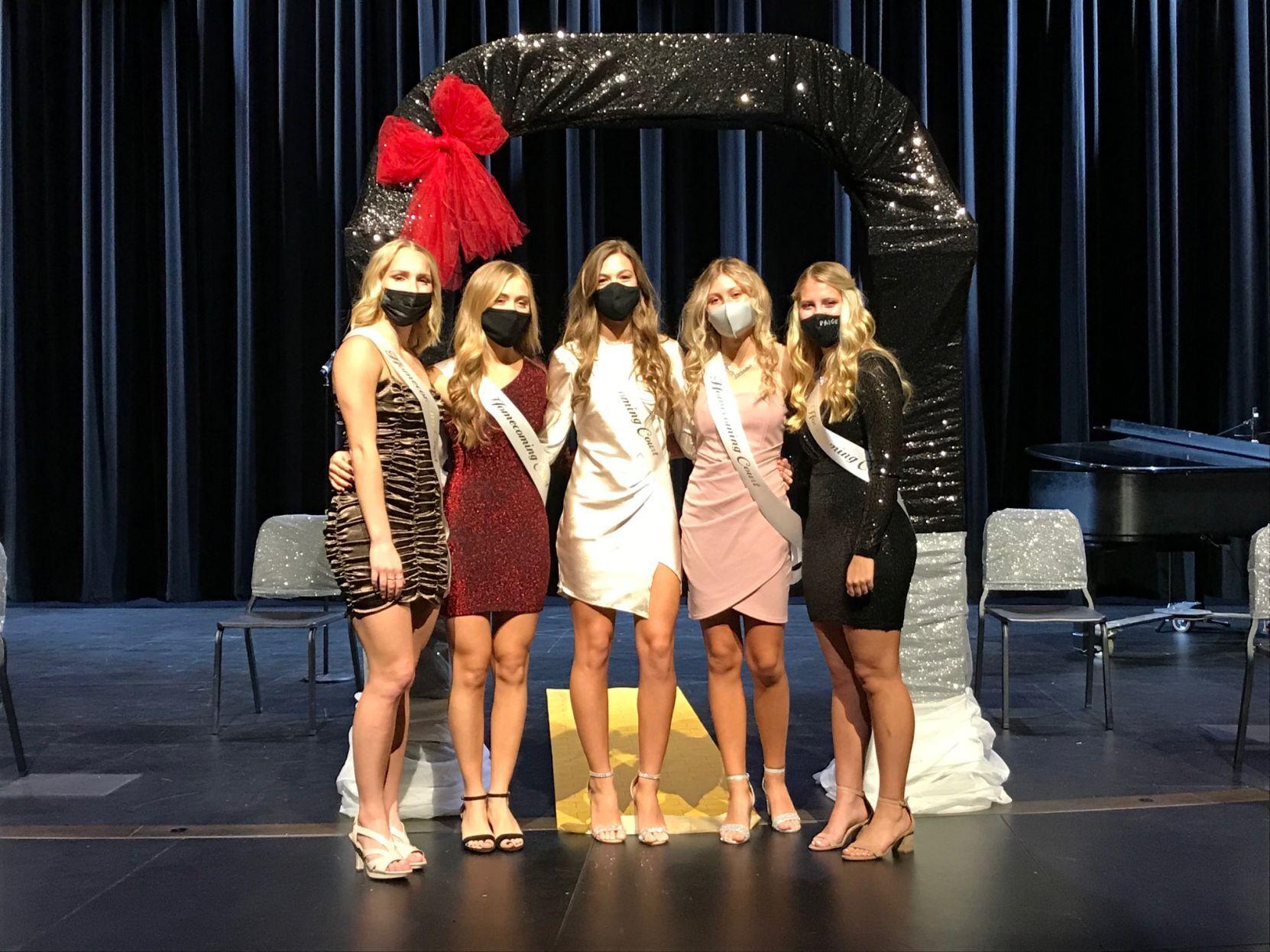 Also Wednesday, Oct. 21 at 7 p.m. is the powderpuff football game between the junior and senior girls. The athletic complex will only be open to juniors and seniors.

On Thursday, Oct. 22, there will be a silly string battle during each class period in the green space.

While access to these events may be limited for students and parents, all of them will be available to watch on livestream. 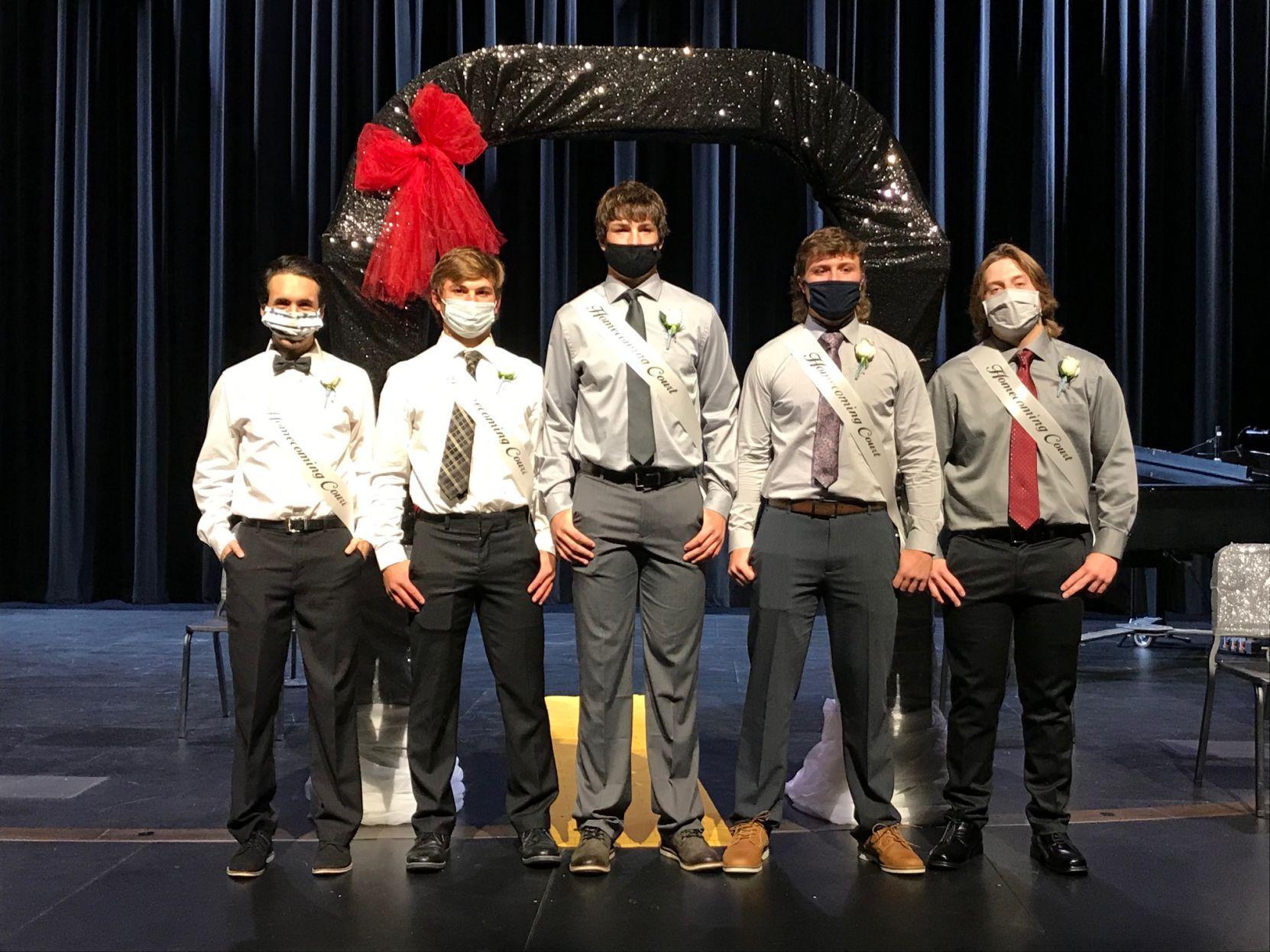 TCU will have several home sports games as well during homecoming. On Thursday, Oct. 22, the Titans volleyball team was set to battle Le Sueur-Henderson at 7 p.m. The C squad game was at 4:15 and B squad at 5:30.

Homecoming ends with the Titans football game on Friday, Oct. 23. During halftime, the Homecoming Royalty will be presented and the Titan Marching Band will play some songs with flag performances.

Going out to eat at the Northfield Culver’s was a game-changer for Webster resident Linda Dorn as it was there she first interacted with Toastmasters.

Her husband, Mark, noticed the Northfield Community Toastmasters meeting in the restaurant’s party room, and he suggested the two of them introduce themselves. Dorn is glad she did, because the group put her life on a whole new trajectory. Since joining the club in January 2017, she’s become more confident, not only in public speaking, but in her everyday life.

“I just fell in love with the organization,” Dorn said. “They believe in integrity and respect and service to others. I thought that it was an organization I wanted to give back to and learn more about.”

Fast forward over three years later, and Dorn was recently appointed one of the highest positions in a Toastmaster district: club growth director. In this position, Dorn will lead more than 1,800 Toastmasters throughout the state, focus on club-building and retention, and develop a marketing strategy for the district to implement.

Toastmasters is a global organization that has over 16,000 clubs across 145 countries. Members meet to practice their public speaking, build their leadership skills, and improve their overall communication through a supportive network. Minnesota has two Toastmasters districts: one serving the north of the Twin Cities into Canada and the other serving Minneapolis and below. The latter is District 6, which Dorn serves.

Chuck Brunnette, Toastmaster District public relations manager, called Dorn “an excellent spokesperson for what we’re trying to achieve” and applauded her idea-generating skills along with her high level of energy. In taking on his public relations role this year, he recognized Dorn as a mentor with all sorts of suggestions to offer.

“She is a dynamic driving force of our district leadership, and oftentimes I wonder how she juggles her professional career with all she’s done with the Toastmasters District,” Brunnette said.

Dorn’s own positive experience with Toastmasters makes promoting the club a natural fit for her.

As a stewardship specialist at Carleton College, Dorn wanted to grow her public speaking skills. While working as a professor at Metropolitan State University in St. Paul, one of her students wrote a review that stuck with her.

“The review was good, but in the comments she said in one of my three-hour lectures, she counted me saying the word ‘um’ 83 times,” Dorn recalls. “I realized I needed to get away from those crutch words.”

Since joining Toastmasters, Dorn said she feels more confident overall by being in a positive and encouraging environment with the other club members.

She’s moved up the ranks in various officer roles and has received both the Division Director of the Year award and Phoenix Award for excellence in leadership as a club coach. Dorn is also among the 1% of Toastmasters to receive the highest honor of Distinguished Toastmaster.

Club growth is an unusual concept for Dorn this year, because where she normally meets with human resource directors, companies and organizations in person, she now schedules video chats. Club support and training also take place via Zoom.

“Some are happy with that because they don’t have to drive a distance; they can just go to their offices,” Dorn said. “Other people of course prefer face to face interactions. And we will get back to face to face.”

There are 120 clubs in District 6, and Dorn belongs to ones in Northfield, Lakeville and Burnsville.

Most clubs meet weekly for one hour, she said, and others meet a couple times per month.

The pandemic offers an advantage to those who want to attend meetings via video chat before joining in person.

“It’s not a cookie cutter approach,” Dorn said. “You really do get an opportunity to decide what is going to help advance you in your professional goals.”

Dorn believes individuals can benefit from Toastmasters at any stage of life — high school or college graduates, those starting out their careers, those in the middle of their careers and those in retirement.

“One of the things I love the most is being able to meet those Toastmasters and helping them along and suggesting maybe they jump outside their comfort zones,” Dorn said. “I have grown in that capacity of working with a team, finding people who I think would really benefit from Toastmasters. I enjoy seeing that growth.”

Toastmasters clubs are located throughout Minnesota, including Northfield, New Prague and Lakeville. To search for clubs, visit toastmasters.org/find-a-club. 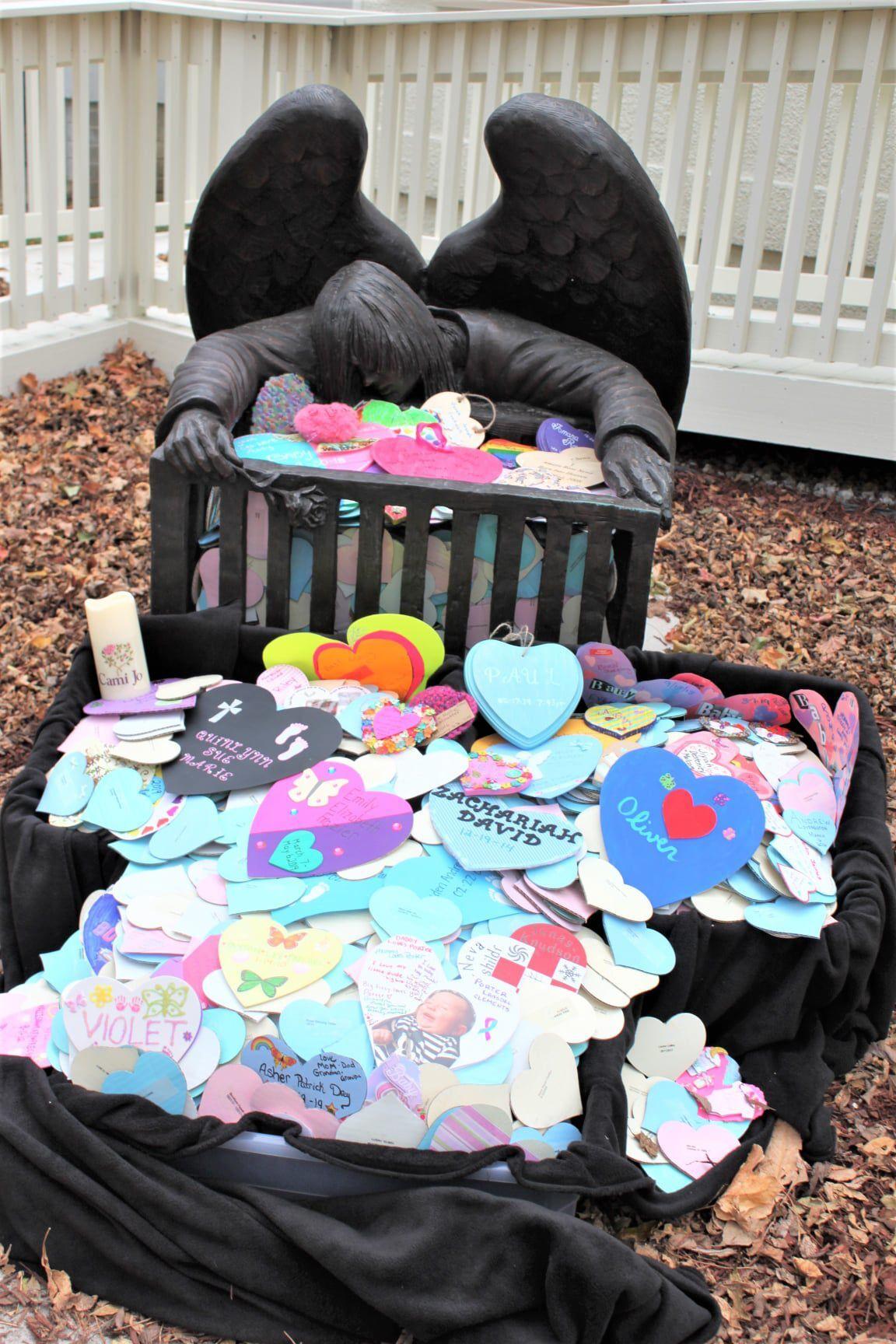 The crib in IRIS’s sculpture of a grieving angel is filled with hearts honoring thousands of children who died in infancy, were stillborn or lost to miscarriage. (Photo courtesy of IRIS)