Food shelves in Lonsdale and Montgomery have relied on area schools to provide donations to the Stuff-A-Truck hunger campaign in previous years, and that hasn’t changed in 2020.

Without knowing how schools would be conducted in the fall, the Mackenthun’s team decided to not only offer its annual donation cause online but to merge it with the Minnesota Grocers Association’s yearly Bag Hunger Campaign. Combining the two causes allows more opportunities for community members to donate toward local food shelves, and on a safer scale.

“We know that the holiday time is a time when food shelves are in need the most, not that they’re not in need all the time, but it seems like this is when it peaks,” said Jaime Mackenthun, director of operations for Mackenthun’s Fine Foods.

The campaign officially kicked off Oct. 23 and continues through Friday, Nov. 13. Donating to the Bag Hunger Campaign requires simply going online to the Mackenthun’s GiveSmart page (e.givesmart.com/events/iV4/) and selecting the desired monetary increment to contribute. The website also links to specific donation categories, such as breakfasts, lunches, dinners, toiletries, baby care, baking supplies and snacks. Donors may also text BHLonsMonty to 76278 and proceed with instructions.

Students or community members wishing to donate items of their own may do so at the Mackenthun’s Fine Foods drop off bins at one of the three store locations. At the store level, donors may purchase contributions and add their names to the store’s donor wall. One-hundred percent of donations go to the participating food shelves.

Stuff-A-Truck initially began at the Waconia Mackenthun’s Fine Foods store. Students would bring food products to school and compete against one another. The Lonsdale and Montgomery stores eventually picked up the cause too, and divided up the donations between the Lonsdale Area Food Shelf and the food shelf at the Montgomery Salvation Army. Last year’s Stuff-A-Truck event generated donations of over 25,000 pounds of food.

Schools, organizations and businesses may continue raising awareness of the Bag Hunger Campaign in a variety of ways, even without following the traditional model, by creating competitions between grades or groups, adding a link to the cause on business or school websites, or promoting the event on social media pages.

To give Mackenthun’s an idea of who is participating, groups can register online at bit.ly/31RbHjv. Mackenthun’s will send digital signage to registered participants and give them recognition on the store’s social media pages. Those with further questions can contact Bethany Mackenthun at bethanymackenthun@gmail.com.

A number of Lonsdale residents on Ninth Avenue SW and Grand Avenue SW experience water flow issues that have impacted their properties. Pictured is Jennifer Rodrigue’s patio, which continues to accumulate water and sink under the frame height as the ground shifts.

Lonsdale residents Jennifer Rodrigue and Amanda Lengsfeld both reside on the Ninth Avenue SW block, and like their surrounding neighbors, they’ve recognized a problem with water flow on their properties.

During Thursday’s City Council meeting, Rodrigue and Lengsfeld detailed their concerns and their neighbors’ failed attempts to alleviate the issues. They submitted a petition requesting the city pay for the installation of a drain tile between Ninth Avenue SW and Grand Avenue SW.

The water flow has impacted the neighbors’ yards in the sense that mowing has become a struggle, and even those who say the problem has improved still experience issues after rainfall, Rodrigue noted in her petition.

Rodrigue explained that her house sits closer to the end of the incline on the affected block. Her property lines touch five neighbors, and each has experienced issues relating to water flow. Rodrigue bought her property at 422 9th Ave. SW in January 2015, and prior to her move the previous owners installed a berm, presumably to prevent the neighbors’ water flow from crossing over their property line. However, Rodrigue said the water flow coming from her neighbor’s yard to the right of her property seems to be moving toward her house because of the berm. 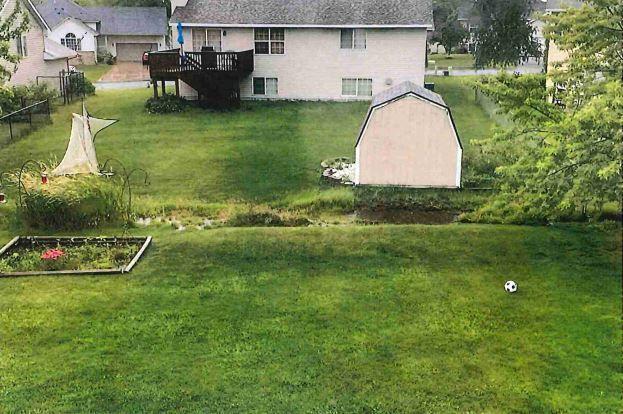 Lonsdale resident Jennifer Rodrigue said the previous owners of her property at 422 9th Ave. SW installed a berm as an attempt to stop water flow issues, but it hasn’t been working out. (Photos courtesy of Jennifer Rodrigue)

Lengfeld added that before she moved into the property at 434 9th Ave. SW in June 2015, the previous owners installed a privacy fence that eventually started leaning as a result of the water flow, so she took it down.

Rodrigue said she is reluctant to attempt a solution herself, because her neighbors have not succeeded in mitigating the problem with their own attempts. Therefore, she and Lengsfeld decided to take matters to the city.

Rodrigue obtained her home builder’s records from the previous owner, which contained no mention of drainage grading.

City Administrator Joel Erickson confirmed that the city found the building permit from 20 years ago, but there was no grading plan. Key Land Homes was the general contractor, and Pioneer was the engineer.

Councilor Kevin Kodada explained that, since 2004, the city has required contractors to complete as-built surveys, which ensure everything in the plan is built to spec without issues in the drainage utility. However, the homes affected by the water flow issues were constructed before 2004.

Councilor Steve Cherney said he himself has experienced water flow issues at his Lonsdale property and recognizes it as a real problem, but one concern of the council is setting a precedent.

“So now we’re up against an historical problem, here and other places in Lonsdale,” Cherney said. “It’s a real budget boom for everyone. I don’t know that there’s a quick answer.”

City Engineer John Powell suggested the neighbors hire a local surveyor to give whoever is looking to solve the problem better information.

Rud agreed that identifying the problem would be a good first step and pointed out that construction and excavation would likely need to wait until the spring at this point regardless.

“We’re on your side; we’re just trying to figure it out,” Rud said.

After the council accepted the petition, Erickson clarified that the city’s role is to review the plans and not take ownership of the project.

The police facility in project in Lonsdale will be built at the Fifteenth Avenue SE and Commerce Drive SE intersection. The City Council recently approved a five-year general obligation capital improvement plan to pay for the facility. (Courtesy of Wold Architects)

One step closer to kicking off the police station project, the Lonsdale City Council officially approved the plan to issue general obligation bonds during its Thursday meeting.

By adopting a resolution, the city approved the issuance of capital improvement plan bonds not to exceed $2.5 million.

Based on the five-year capital improvement plan, the current police facility in Lonsdale is inadequate for serving the community’s needs due to limited space and outdated functions. The estimated cost of the project is $2.2 million.

By paying for the project with CIP bonds, the city pledges its full tax authority to pay a debt service. The long-term life of the project influenced the city to go the route of CIP bonds, and City Administrator Joel Erickson said any additional cash outlay “would significantly weaken the city’s liquidity.”

Earlier in the year, the city purchased land for the police facility: 10 acres at the Fifteenth Avenue SE and Commerce Drive SE intersection. Future developments will eventually be built on the land not reserved for the police station. The cost was $270,000, and the city may pay for $100,000 of that with general obligation bonds.

The city plans to pay for the balance by digging into its reserves. The balance could be bonded for, but they would then be taxable and trigger a higher interest rate, so city staff didn’t recommend bonding for the balance of $170,000.

The term of the bond is 20 years, and the annual debt service will go toward the issuance of $2.4 million in bonds.

If no one submits a petition by Nov. 28, requesting a vote on the bonds, the city can proceed with negotiations with Baird, the financial service company. Otherwise, the city would need to hold an election either Feb. 9, April 13, Aug. 10 or Nov. 2 in 2021. As of Thursday evening, Erickson said the city did not receive any verbal or written petitions from residents.

Before approving the issuance of general obligation CIP bonds, the City Council held a public hearing to answer questions on the payment method and police station from the community. One resident who attended the meeting commented, “It seems like a lot of money to start a building.”

Mayor Tim Rud explained that the existing building is in poor shape and not compliant for male and female officers. The building is about 80 years old, he said, and has undergone roof patchings and other work. The new facility will be constructed with the future in mind, as Lonsdale is expected to grow significantly in the coming years.

Councilor Scott Pelava added that while it seems like a lot of money for the project, when the city looked into expanding its current city hall a couple years ago, the estimated cost was triple what staff expected. The police station can’t be built similar to a residential house, he said, because the station needs to meet a number of codes with extra functions like security systems and camera systems.

Rud said the City Council has one more budget meeting to plan for 2021, and it was already decided the tax rate will not change.

Also during Thursday’s meeting, the City Council hosted a second improvement hearing for the 2021 street and utility improvement project, which impacts the Third Avenue SW and Fourth Avenue SW area of town.

City Engineer John Powell delivered a presentation on the planned project, reasons for the construction and the areas that will be impacted. Several community members attended the meeting to ask questions.

Powell’s estimate of the total project cost is $3.6 million. General obligation bonds and city funds will pay for the sanitary repair, storm sewer repair, water main and street construction. Assessments, levied against the impacted properties and consistent with previous construction projects, will cover surface and drainage improvements. That comes out to $14,000 per single family residential unit ($3,920 for water only) and $245 per front foot of commercial properties.

Powell explained that the streets impacted by the project have generally already deteriorated beyond a point of needing construction. The city also experienced a number of water main breaks because the pipe material has aged and deteriorated. The reason for spreading out the project duration is to give the

Rud explained that the city likes to have roads go through a freeze and thaw course during construction so it’s easier on the contractors to fix the final product the next year.

In terms of trees that might be impacted by construction, Powell said Wold has worked around trees and removed them in the past because they became stressed or residents were unhappy with them after construction. He said Wold wants to take the safest approach to the trees and not harm the root systems and will replace trees.

“I think not only trees but if you have specific issues the city can come take a look at it — invisible fence, drainage, sidewalks; we’re happy to have someone come out and chat with you on site,” Rud said. “ … We’re really here to work for residents. We’re always on the residents’ side but have to know what the issues are.”

Residents who will be impacted by the 2021 street and utility project, which begins in May 2021, may contact City Administrator Joel Erickson at 507-744-2327 or jerickson@lonstel.com or City Engineer John Powell at 952-737-4661 or jpowell@wsbeng.com with further questions.