The Lonsdale Chamber of Commerce plans to host a second street fair in May, much like the first event last fall. Pictured September 2020, children waved to Fandsen Bank & Trust’s Penny the Pig mascot at the first Lonsdale Street Fair. (Misty Schwab/southernminn.com)

Get ready for vendors, food trucks, a beer garden, inflatables and live music.

The Lonsdale Street Fair is returning for a second round of business showcases this spring. Replacing the Lonsdale Chamber of Commerce’s indoor business expo typically held in March, the COVID-friendly outdoor event is 5 to 8 p.m. May 20 on Ash Street NE outside Mackenthun’s Fine Foods. Generation Building Center is sponsoring this free event.

Like the Street Fair held last fall, attendees may choose to collect stamps on their business-sponsored passports to submit their name in the prize drawing.

“[The first Street Fair] was extremely successful,” said Chamber of Commerce Executive Director Shanna Gutzke-Kupp. “We had so many compliments, not only from the businesses and vendors, but from the guests.”

The first Street Fair was originally planned for May 2020, to replace last year’s business expo. With more leeway to host an outdoor event in the fall, the chamber instead hosted the Lonsdale Street Fair in September.

“This year with Community Day being in August, we still wanted to do [the Street Fair] before summer,” Gutzke-Kupp said. “So right now we feel comfortable, with the executive orders in place, that we’ll be able to coordinate this event.”

The potential for nicer weather, and longer daylight, will be the main difference between the upcoming Street Fair and the one in September. Gutzke-Kupp said the Lonsdale Fire Department needed to provide lighting at the outdoor event the first time, and that will be one less checklist item this spring.

Masks will be available for attendees, and Gutzke-Kupp plans to declare the official mask guidelines closer to the event date. That will depend on Gov. Tim Walz’ mask recommendations at that time. She has already asked vendors to wear masks so they feel more comfortable.

“We’ve got another month to see, and hopefully by then I would assume most would have had their first or second [COVID-19 vaccine] shots,” Gutzke-Kupp said.

There is still time for more vendors to register for the Lonsdale Street Fair. The deadline is May 13, the same deadline for cancellations. 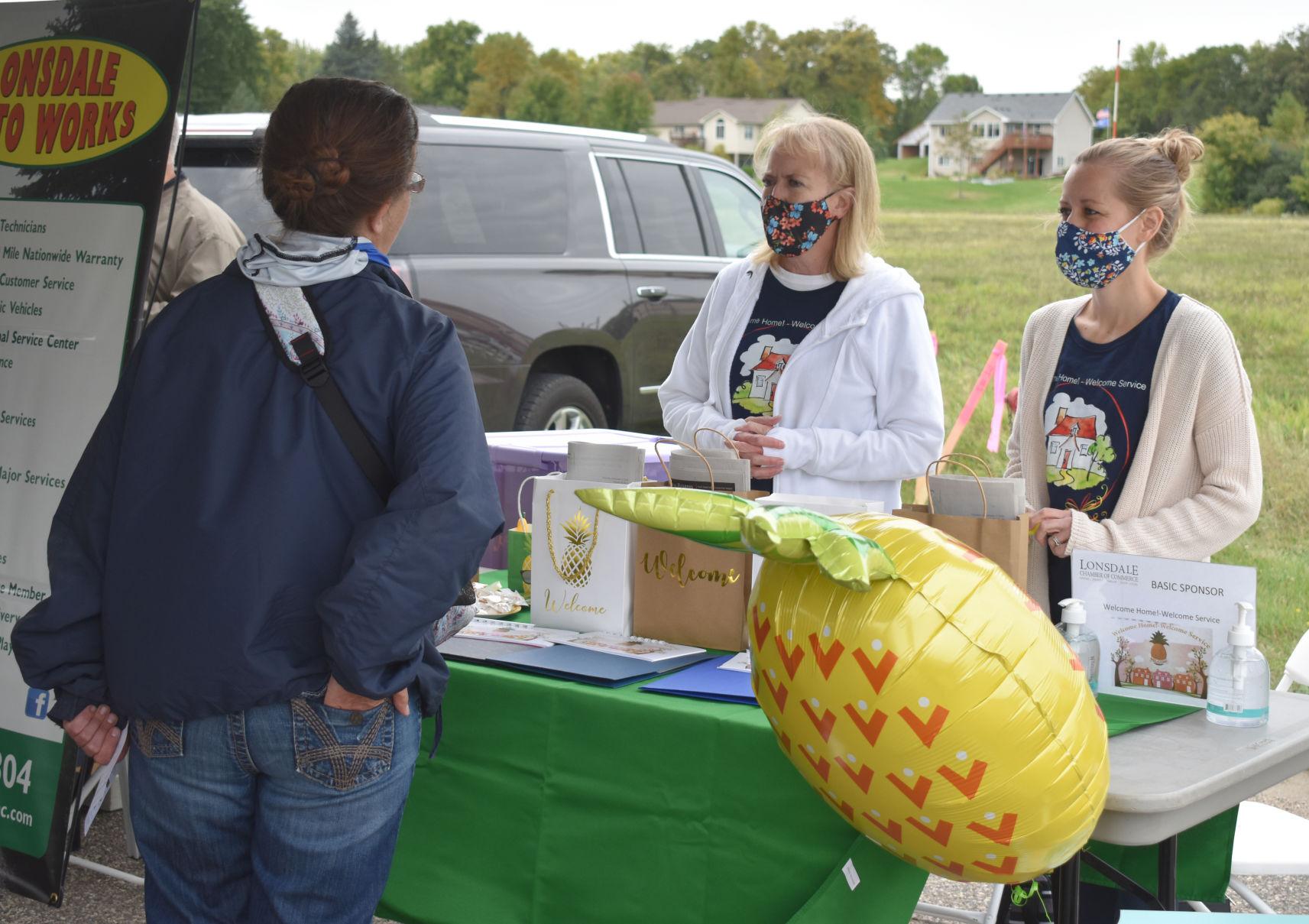 Each vendor at the Lonsdale Street Fair and Business Expo will have a 10-by-10-foot space for their table, chairs and products. Vendors may register until May 13. Pictured in September, the Welcome Home Welcome Service booth was the first vendor stop for many Lonsdale Street Fair attendees. (Misty Schwab/southernminn.com)

Vendors must agree to be fully operational for the entire duration of the event, set up from 3 to 4:45 p.m. that afternoon, and be fully functional 15 minutes before the start time. They must also provide proof of insurance and complete an ST19 Operator Certificate of Compliance form if they plan to sell products. Food vendors are subject to all state and health department requirements.

Each vendor will have a 10-by-10-foot space and must provide their own table, tent and chairs unless they choose to sponsor the event. Premium sponsors will have their booth fees waived.

After all participating vendors register, Gutzke-Kupp plans to post a banner with a complete list of vendors outside Lonsdale Liquor the second week of May.

The Lonsdale Street Fair and Business Expo is 5 to 8 p.m. May 20 on Ash Street NE, outside Mackenthun's Fine Foods. Vendors are welcome to register by May 13. To do so, go to bit.ly/lonsdalestreetfair or call Shanna Gutzke-Kupp at 507-744-4962.

Lonsdale Community Day, which was cancelled due to COVID-19 last year, is scheduled to return this summer on Aug. 14. Check out lonsdalechamber.com for updates.

This article was edited Wednesday, May 5 to include the date of the Lonsdale Street Fair. It is planned for 5 to 8 p.m. May 20.

The Smoke property, outlined in light blue, will have a patio bordering the west side of the building later this year to allow for outdoor seating of 24 occupants. (Courtesy of Schneider Geospatial)

Smoke has attracted a strong customer base since its opening last year, but the addition of outdoor seating would allow the restaurant to serve more guests at once.

At the Lonsdale City Council’s Thursday meeting, Smoke owner Andrew Rasmussen explained that Smoke can currently operate at 75% capacity indoors, due to COVID-19 health and safety regulations. Adding outdoor seating will allow the restaurant to reach 100% occupancy, which is 44 people.

Rasmussen submitted a conditional use permit for a patio/outdoor seating at Smoke, which the council approved at the meeting. In a separate agenda item, the council also approved an adjustment to Smoke’s liquor license to include the outdoor serving area.

This area outside Smoke is paved and was used as a drive-thru under previous ownership of the building. Aside from this drive-thru window, there will be no direct access to the building from the patio. Patrons will need to enter at the west door and walk through the restaurant to access the outdoor seats, and Rasmussen proposed a 5-foot handicap accessible gate on the north side.

A black ornamental fence will encase the patio with rope lighting placed along the fence. No additional lighting, or speakers, were proposed.

The new setup would not limit parking for patrons, who use the west lot or else park on the street.

As part of the patio addition, Rasmussen’s plans include the installation of a vestibule/bathroom in the months ahead. Out of respect for neighbors and guests, he proposed not installing a portable toilet in the interim. As long as the restaurant stays under the 44 person capacity, he said the indoor bathroom will be sufficient for the time being.

In addressing potential noise issues outdoor seating could cause at a restaurant in a residential area, Rasmussen said, “I feel we have a very strong relationship with the people that surround Smoke. All the residents, they love having us there. I feel that they’re very friendly to us.”

He added there will be no outdoor music as part of the arrangement, and the restaurant’s business model isn’t to be open late; he said Smoke is “completely dead” by 9 p.m. on Friday and Saturday nights.

“It sounds like you’re pretty cognizant of the neighbors and respect their properties …” Mayor Tim Rud said at the meeting. “Typically noise is your biggest complaint [for an outdoor establishment], and it sounds like you can monitor that and it’s not late night anyway.”

The newly amended liquor license, which the council approved, will allow for Smoke to serve alcohol on the outdoor patio. To prevent food or beverage consumption outside the seating area, Rasmussen plans to have a server closely monitor the space when it’s occupied.

Ideally, Rasmussen said he would like to see the patio project started in late spring or early summer, but it depends on the availability of materials. In the meantime, he looks forward to a roof replacement starting May 10.

A divisive and sometimes heated debate on the future of Rice County’s jail ended in a stalemate on Tuesday, as Rice County commissioners decided to put off for at least two weeks a final decision on whether to build a new jail or collaborate with Steele County.

The delay will further prolong a years-long saga that began when the Minnesota Department of Corrections threatened to turn Rice County’s Correctional Center into a 90-day facility due to a lack of space and amenities.

Rice County Sheriff Troy Dunn has estimated that this could mean extra expense to the county of close to $1 million per year. Even for Rice County’s Jail to retain its status as a 90-day facility, Dunn said that it would likely require about $44 million in improvements.

The new jail and LEC has been the preference of a majority of the County Board and still appears to be. However, Commissioner Galen Malecha has been opposed and at Tuesday’s meeting his colleague Jim Purfeerst expressed hesitance as well.

At Malecha’s behest, the County Board explored the possibility of collaborating with Steele County. Nearly 20 years ago, Steele County built a new jail that now has a capacity far exceeding its needs, with the expectation that it would house inmates from surrounding counties.

Steele County can house close to 150 inmates, but even today Steele County’s own jail study concluded that it only needed about 66 beds. With recent upgrades, County Administrator Scott Golberg said the facility has the staff and capacity needed to accommodate Rice County.

Golberg and Steele County Commissioner Jim Abbe attended Rice County’s board meeting Tuesday to talk about their proposal for a possible collaboration. Under a plan approved by the Steele County Board, Rice County would buy into Steele County’s Detention Center in Owatonna for about $7 million and then split costs 50-50.

Though Abbe said he wasn’t there to make a “sales pitch,” the proposal received unanimous backing from Steele County’s Board. Board Chair James Brady called it a “once-in-a-lifetime opportunity” when Steele County commissioners met Monday to discuss their proposal to Rice County.

Sarah Johnson, who works in enforcement and inspections for the DOC, emphasized to the Rice County Board that not all beds are created equal. When taken into a jail, inmates are assessed and classified based on factors such as gender, security risk, and medical and mental health needs.

The Department of Corrections requires an inmate’s classification to match the kind of bed they occupy. Johnson’s DOC colleague Jen Pfiefer said they anticipated that a merged Rice-Steele Detention Center simply wouldn’t have enough special needs beds, for example.

Based in part off of testimony from Johnson and Pfiefer, Rice County Commissioners Jeff Docken, Steve Underdahl and Dave Miller appear set to approve the construction of a new jail at a cost of $49 million, seeing it as a massive expense necessitated by years of falling behind.

“I’m really looking for a long-term solution on this,” Underdahl said. “We haven’t been doing anything to help the jail in recent years.”

Malecha expressed frustration from the get-go, arguing that the county hasn’t been transparent enough with taxpayers or even fully done its homework about the new jail’s significant cost and how it plans to pay for it.

That rankled Docken, who noted that Finance Director Paula O’Connell has estimated the potential impact of the new jail. With a 30-year loan, O’Connell projects the annual costs to taxpayers to come out to about $2.2 million, raising levies on a $250,000 home by about $70.

Malecha raised concerns about the impact of such an increase on taxpayers, and even Purfeerst was lukewarm. He suggested that it might be most appropriate for the county to focus on the jail or to accept Steele County’s offer.

“I hear a lot about (Steele County) coming in at the 11th hour, but I don’t know if we ever really reached out to Steele County on this,” he said.