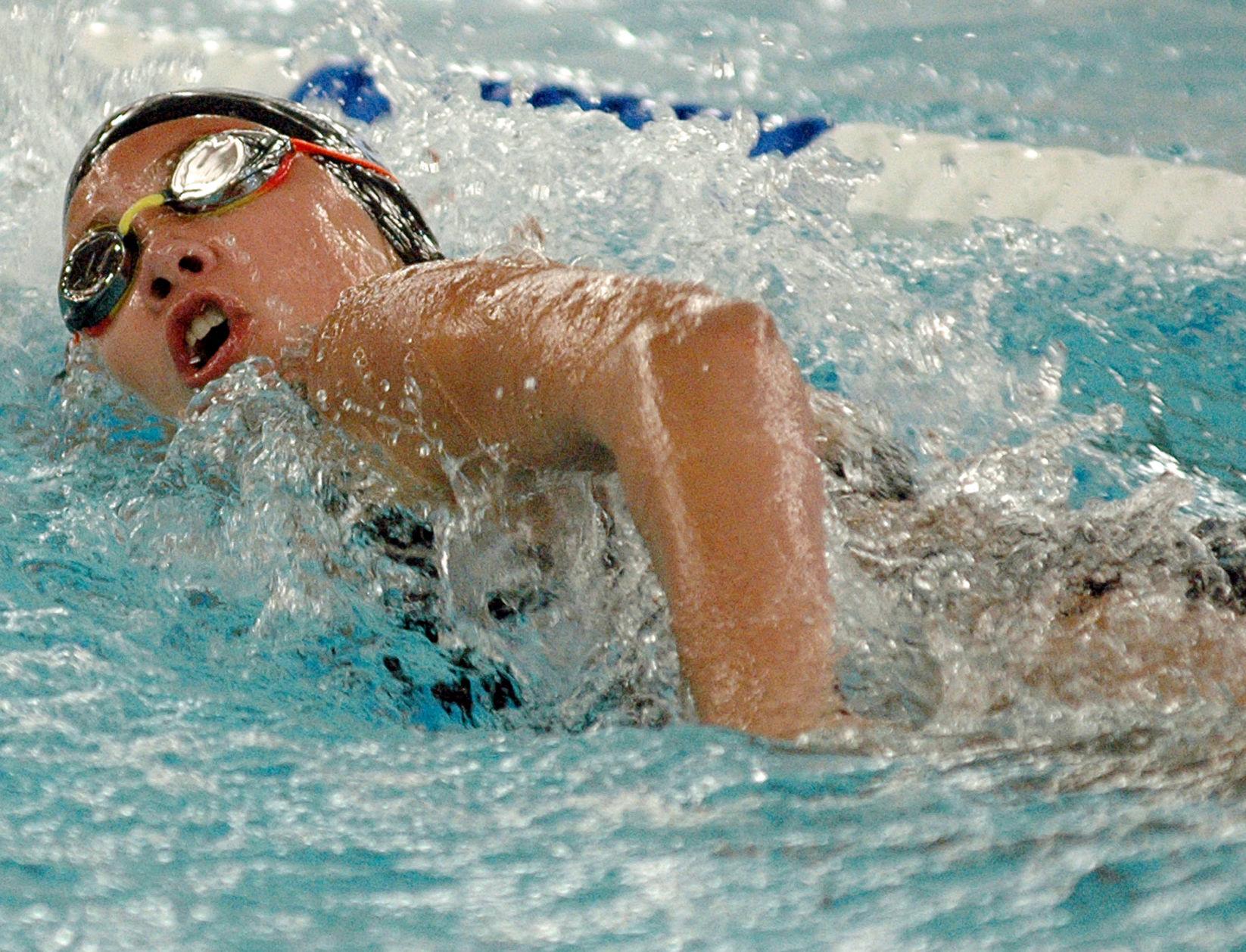 A hybrid model is the suggested format for Tri-City United Public Schools to start the 2020-21 school year amid the COVID-19 pandemic, meaning students will be relying on technology heavily. (southernminn.com file photo)

Tri-City United Schools on Tuesday has changed the learning model it’ll start the school year with. All students in grades one to 12 will start with a hybrid model. Kindergarten students will attend school five days a week.

“Our first- to 12th-grade students will attend on an alternating basis with one group being Monday, Wednesday and every other Friday, and the other group being attending Tuesday, Thursday and every other Friday, Superintendent Lonnie Seifert wrote in a Wednesday email to the newspaper. Preschoolers will follow the kindergarten model with students attending all days that were planned. This decision is based on updated data received Tuesday from Le Sueur County Public Health.

The change in plans at the school district comes amid a sharp rise in county COVID cases. As of Sept. 1, Le Sueur County had reported 383 confirmed cases, with eight residents currently hospitalized. More than 50 confirmed cases were reported by the county in the past week, ending the month of August with more than 180 new cases. This outpaced the 113 cases reported in the month of July, which had the highest number of new cases on county record until the past few weeks.

Positive testing rates are also surpassing state averages. In the Minnesota Department of Health’s latest weekly report, 5.9% of cases tested in Le Sueur County were positive compared to the state average of 5.5%.

Le Sueur County Public Health Director Cindy Shaughnessy warned residents to be on guard. The director reported that the recent spike was the result of community spread, which had been confirmed by an epi-curve conducted by a county epidemiologist.

“People are just letting their guard down,” said Shaughnessy. “That’s not just Le Sueur County, that what we’re seeing statewide is people are gathering at backyard barbecues, weddings, funerals and not wearing masks, not social distancing.”

The negative impacts of rising cases has negative implications not just for public health, but for institutions like schools and nursing homes. Under state guidelines, county case numbers must be at a certain threshold in order for schools to implement certain learning models.

For a model that allows in-person learning for elementary students and hybrid learning for secondary grade levels, county case levels should be between 10-20 cases per 100,000 at the time the sample was obtained. The most recent count for the county was 18 cases per 100,000. Shaughnessy was confident that once the counts are published for the last two weeks of August, total case counts would be above 20 per 100,000 and full hybrid learning would be recommended to schools.

“Our schools are very much aware of this,” said Shaughnessy. “Our school nurse consultant meets with them regularly and gives them this information. They are ready to pivot. Most of them are aware of the model they want to use but are not finalizing those decisions yet.”

On Aug. 17, the TCU School Board approved an in-person model for elementary students, in which kindergartners through sixth graders would report to school every day with a number of added safety precautions.

But with the increase in cases in Le Sueur County, the district felt it was better to make the switch to hybrid for grades first through sixth.

Grades seventh and eighth, meanwhile, will be separated into two groups on a five-period block schedule under a hybrid model. One group would attend school in person every Monday and Wednesday, while the other group would attend every Tuesday and Thursday. When not in school, students will be distance learning from home. On Fridays, the groups would alternate schedules so that each group is in the building every other Friday.

High school students in grades ninth through 12th will also be split up into two groups under a hybrid model. Like the middle school, groups will be in school on either Monday and Wednesday or Tuesday and Thursday while alternating Fridays.

This story has been modified to note that TCU kindergartners will attend school each week day.

Victor Garcia of Belle Plaine, the artist behind the new mural in Montgomery, points to the three men he painted walking along Main Street. The one in the middle is him, he said. (Misty Schwab/Lonsdale News Review)

It’s hard to miss the 40-foot mural across from Franke’s Bakery in Montgomery, but all the fine details embedded in the painting require further speculation.

Artist Victor Garcia, who also painted the original Montgomery mural about 25 years ago, personalized his masterpiece with hidden names and symbols without detracting attention from the historical significance of the mural. If anything, Garcia’s small additions make one stop and gaze at the mural a bit more closely. 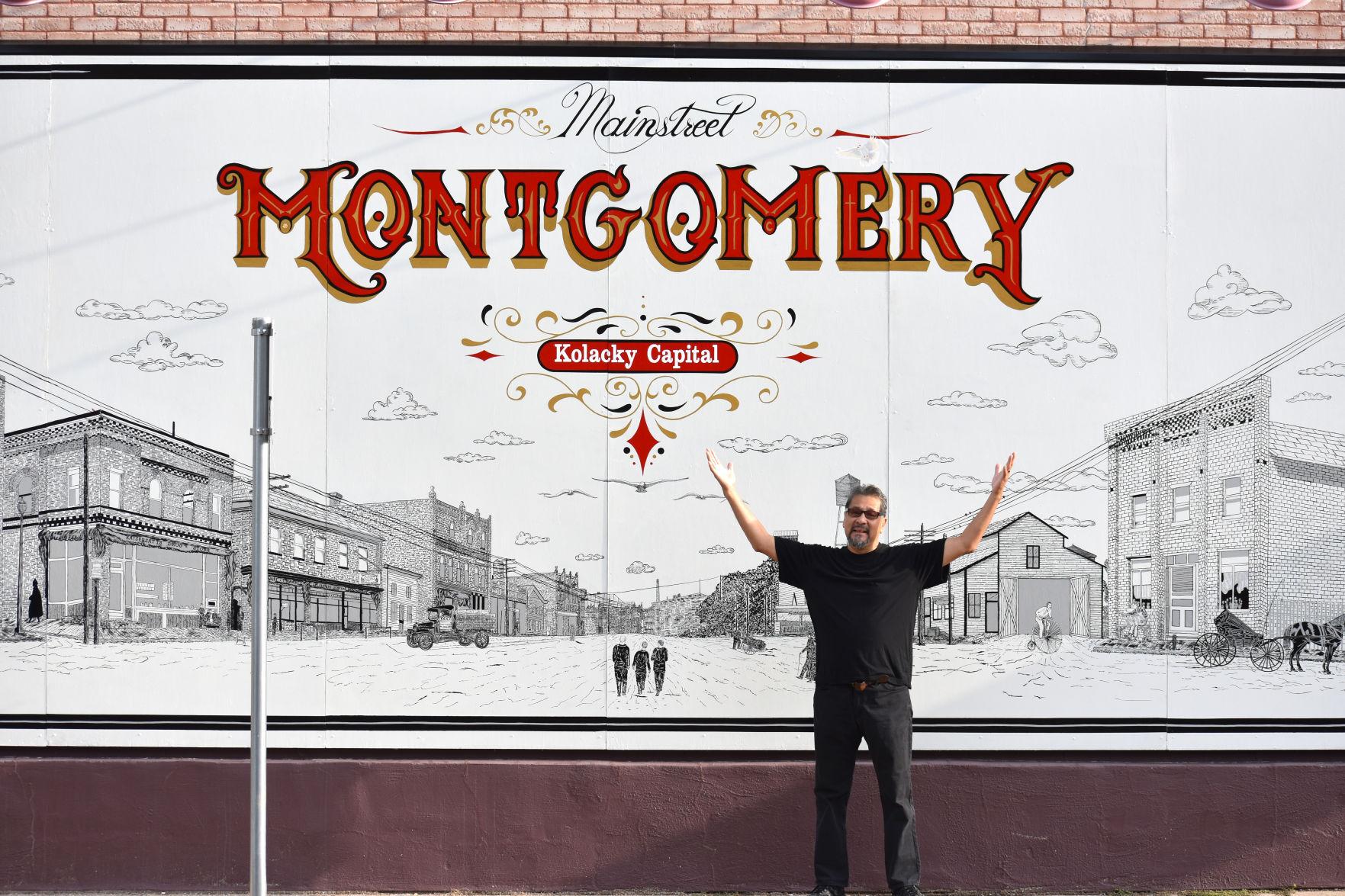 Belle Plaine artist Victor Garcia spent about 18 months developing the Montgomery mural across from Franke’s Bakery. The mural is a restoration of a project he completed 25 years ago with the same boards, but this design includes more details. (Misty Schwab/Lonsdale News Review)

It took Garcia 18 months and $1,200 to complete the renovated mural, which the Arts and Heritage Board and Montgomery Area Community Club helped make possible. In 2019, the Southern Minnesota Initiative Foundation (SMIF) selected Montgomery for a Paint the Town Grant, in which Ace Hardware donated 25 gallons of paint for the mural restoration.

“We funded [the mural] through a lot of community donations; many, many over the course of a couple years from the beginning to the end, and we got several legacy grants through Prairie Lakes Regional Arts Council,” said Susan Hayes, a member of the Arts and Heritage Board. “It was just wonderful. The community support was fabulous.”

Garcia used the same wooden boards from the original artwork, and this time, he sealed the painting in a clear coat to preserve it for a longer period.

Unlike the former mural, the renovated project depicts both sides of Montgomery Main Street in a 1900s scene, which includes Westerman Lumber and the Pizzaria 201 building. Garcia painted the mural’s central scene to resemble black and white photographs, which he referenced for accuracy. 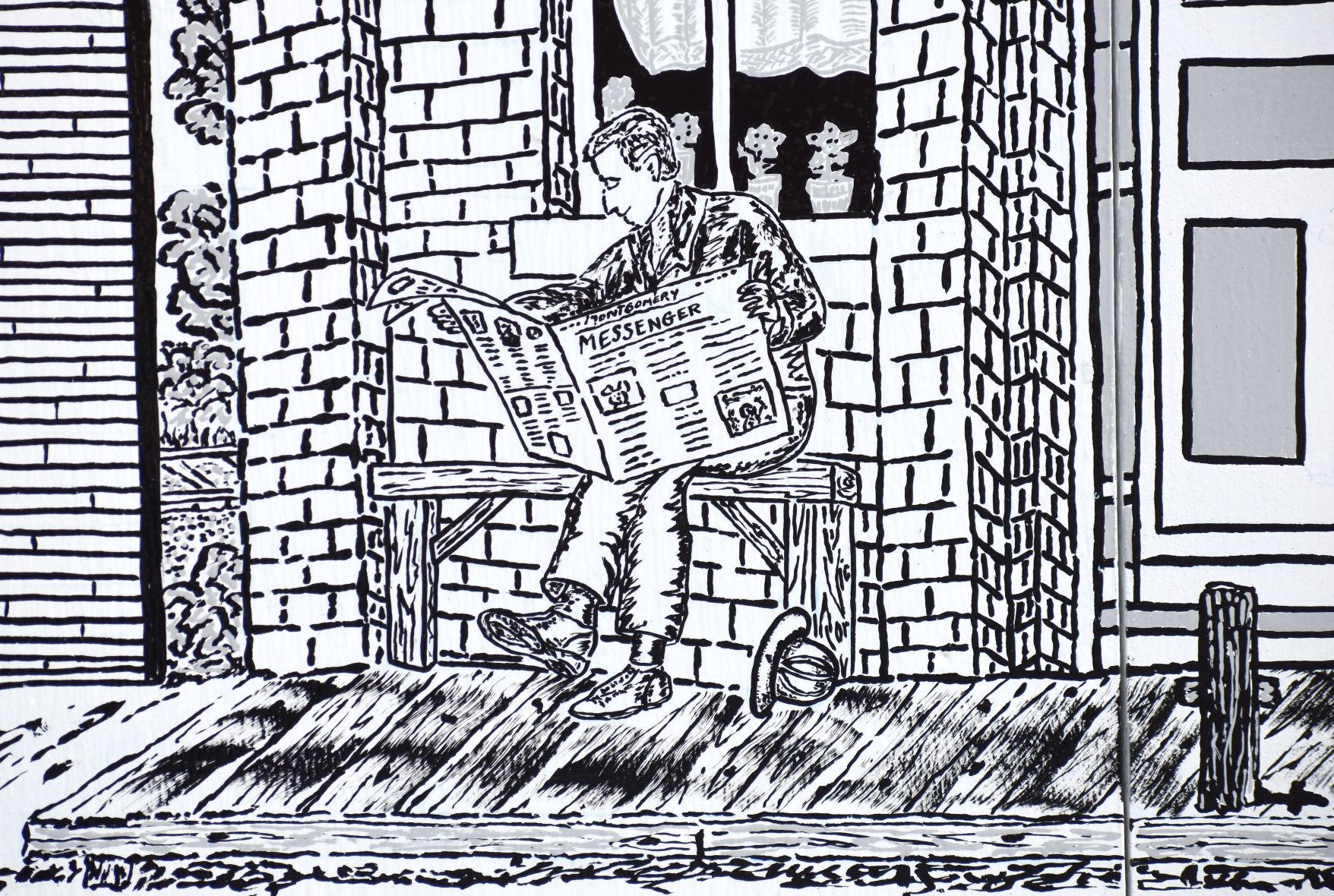 Although painting the buildings brick by brick felt like a laborious process to start, Garcia said, “Once I got going, then I couldn’t stop.”

In the center of the street scene, Garcia painted a back view of himself walking between two friends who he credits for leading him to Christianity. Further along the road, Garcia also painted another friend waving near a building.

Garcia referenced an old photograph of his grandfather to paint a man pushing a wheelbarrow along the road, and he included his family dog among a group of men gathered outside a Main Street building. Birds perched on a telephone wire represent his family members, including three brothers who died. 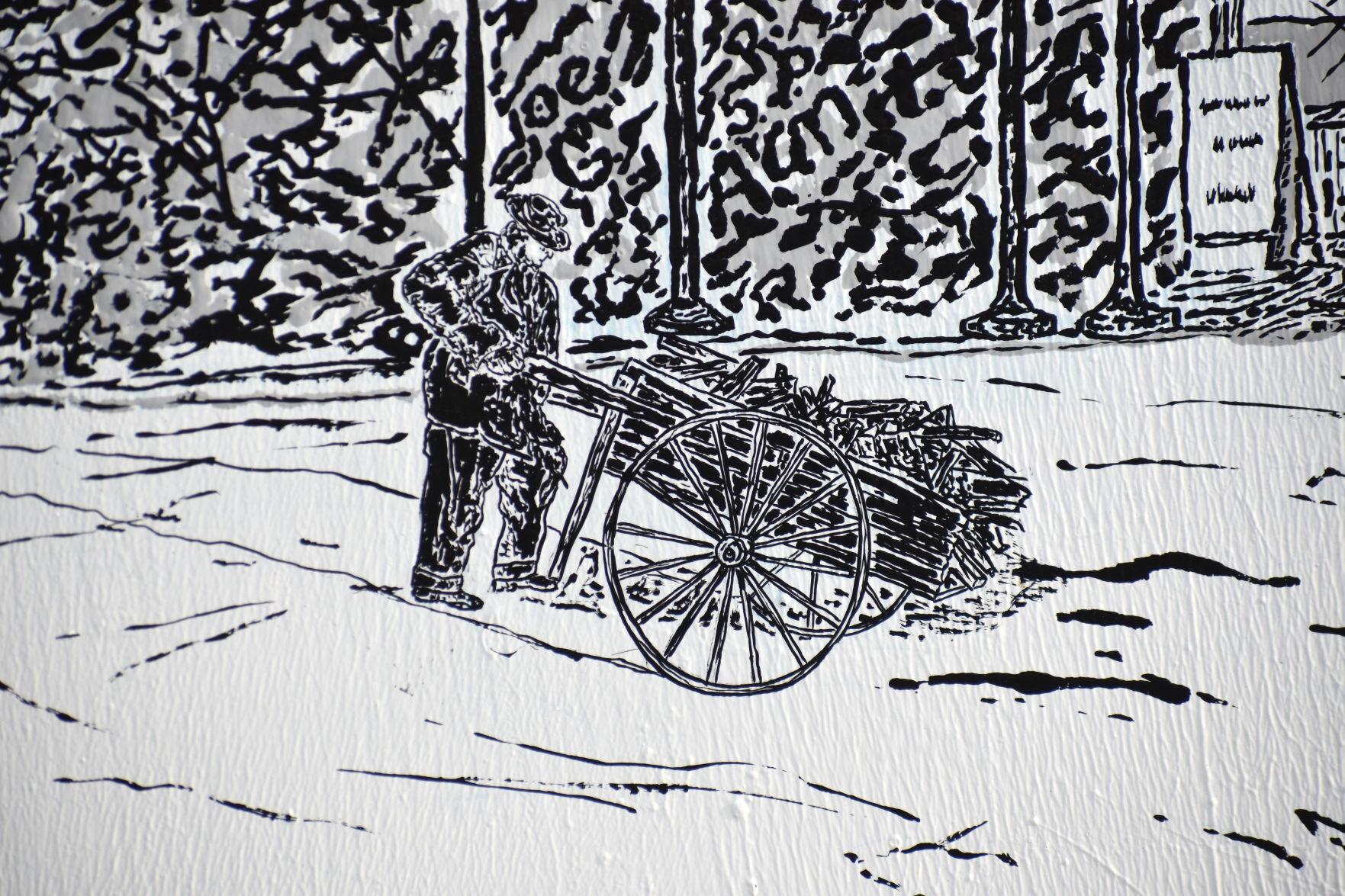 A photograph of his grandfather inspired Victor Garcia to paint this figure on the mural. (Misty Schwab/Lonsdale News Review) 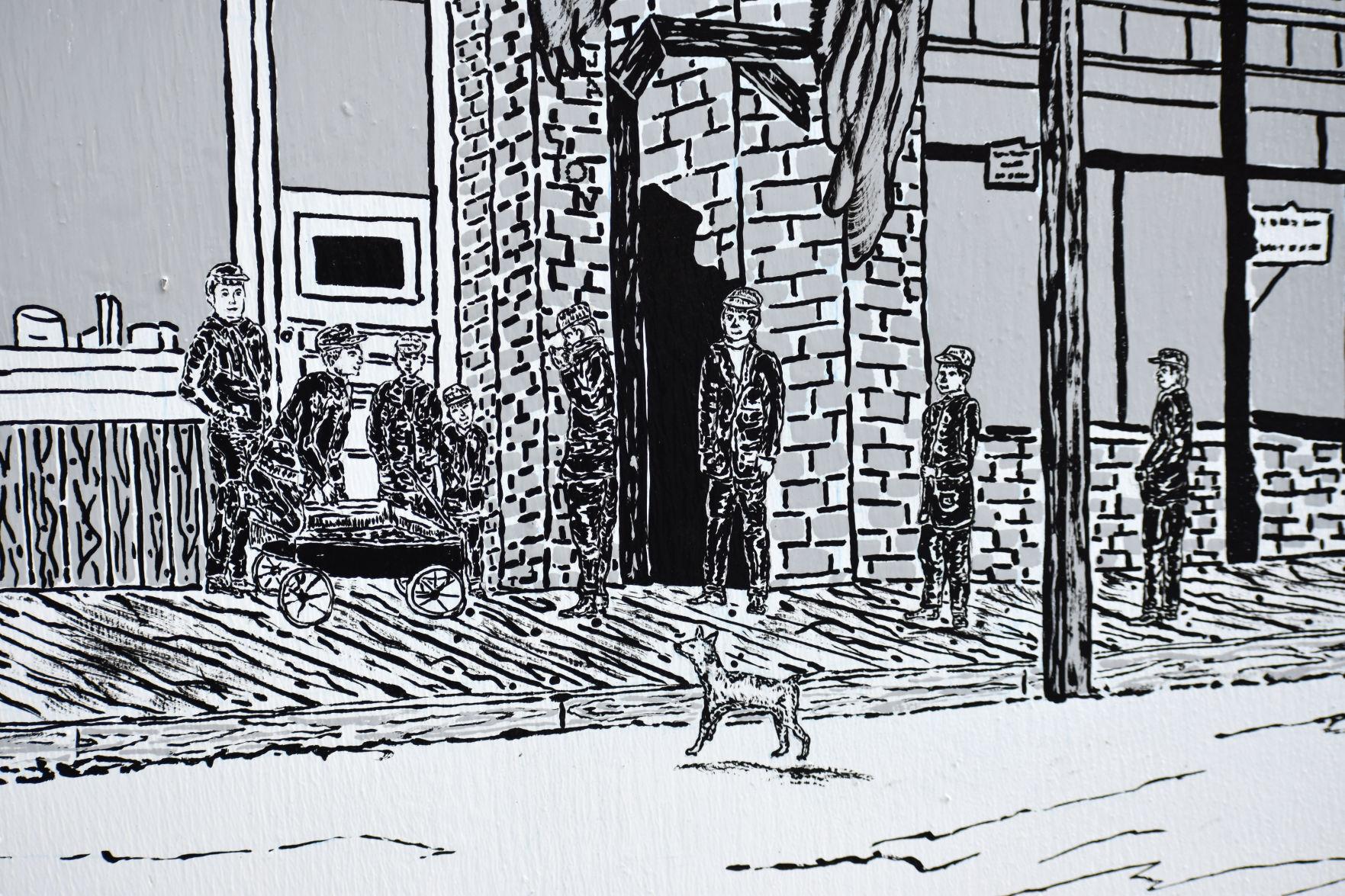 People and animals aside, he painted the names of various family members and volunteer painters into the bricks and tree branches. The name “Ron” references Ron Kocina, who donated his warehouse space for the mural painting process, and “Maureen” refers to Maureen Gunderson, who commissioned Garcia to restore the mural. Although the building farthest to the right wasn’t yet Pizzaria 201 in the 1900s, Garcia painted the side of the roof to resemble a slice of pizza.

Broadening his pallet, Garcia used red and gold for the Montgomery letters above the street scene and added “Kolacky Capital” as a subhead. Stare at the letters in the word “Montgomery” for a while, and mural admirers might find the letters in Garcia’s first name, Victor, in gold. The “t” in his name is also a cross that symbolizes his Christian faith, and the dove above the cross represents the Holy Spirit, which he believes guided his paintbrush. Seagulls under the lettering appear to fly toward viewers, creating a three-dimensional effect.

In each corner of the mural, Garcia incorporated Montgomery and Minnesota symbols like the steeples to Most Holy Redeemer Catholic Church and St. John’s Lutheran Church, a tiny Green Giant, a hand painted hummingbird and airbrushed flowers. 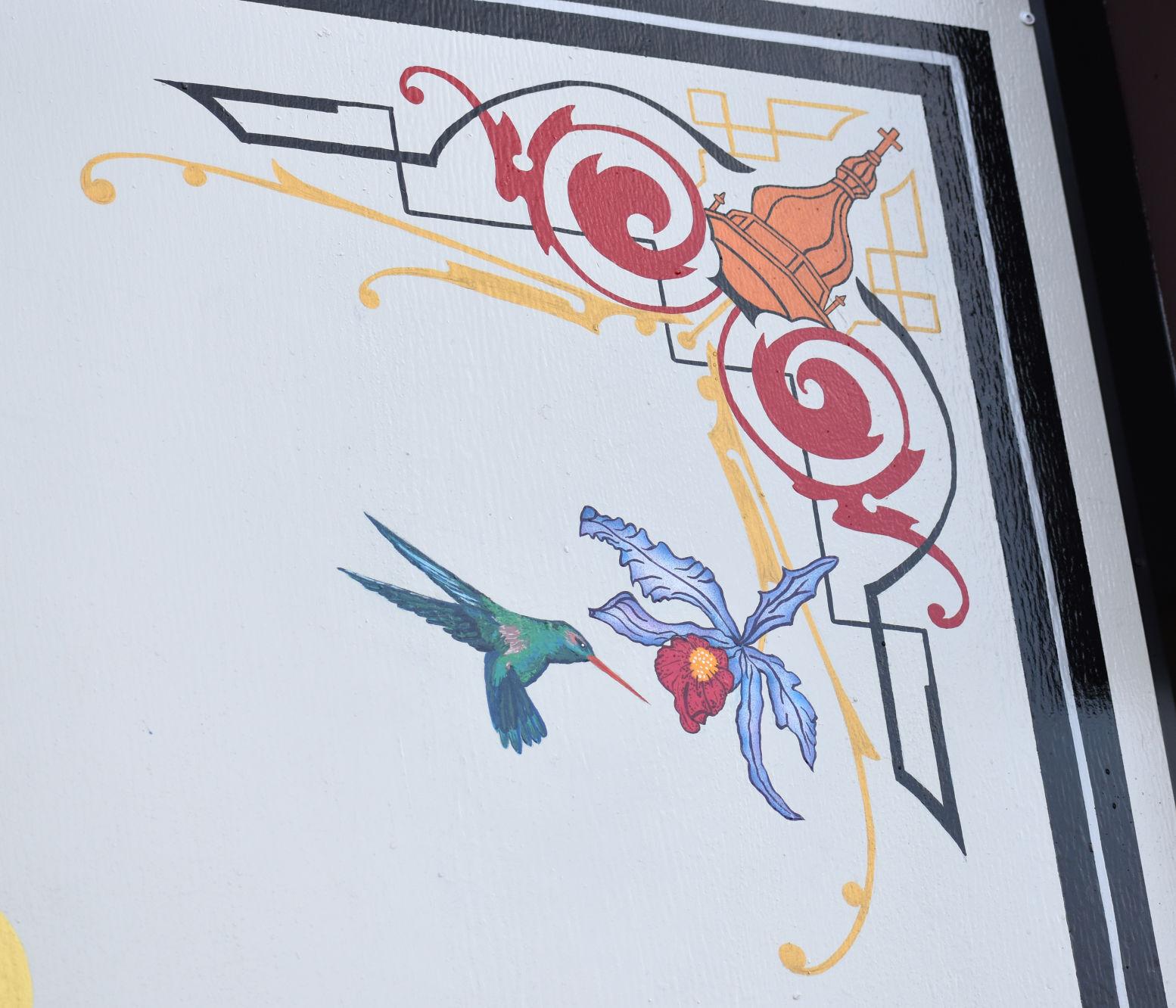 Each corner of Victor Garcai’s mural is a little different. This one in the top right-hand corner includes a hand painted hummingbird and a church steeple. (Misty Schwab/Lonsdale News Review)

Near each corner of the mural, Garcia also painted horizontal ovals in which community volunteers painted different symbols of Montgomery’s history and heritage. These include Kolacky royalty holding kolacky, the Memorial Park Settlers Cabin, the City Hall and fire station, and “Steam Engine” Joe Rynda. He also painted a Czech flag and US flag on opposite sides of the mural. 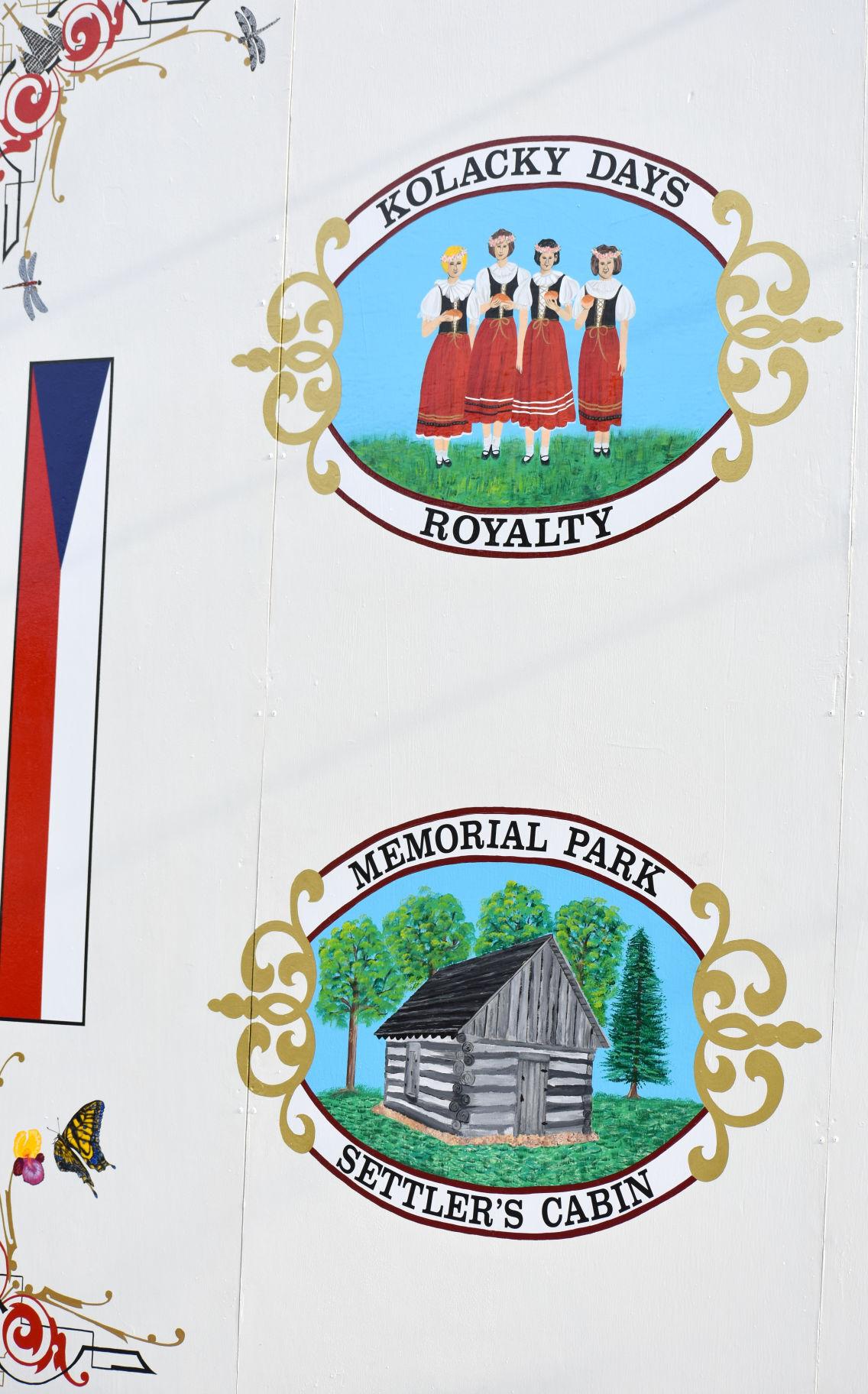 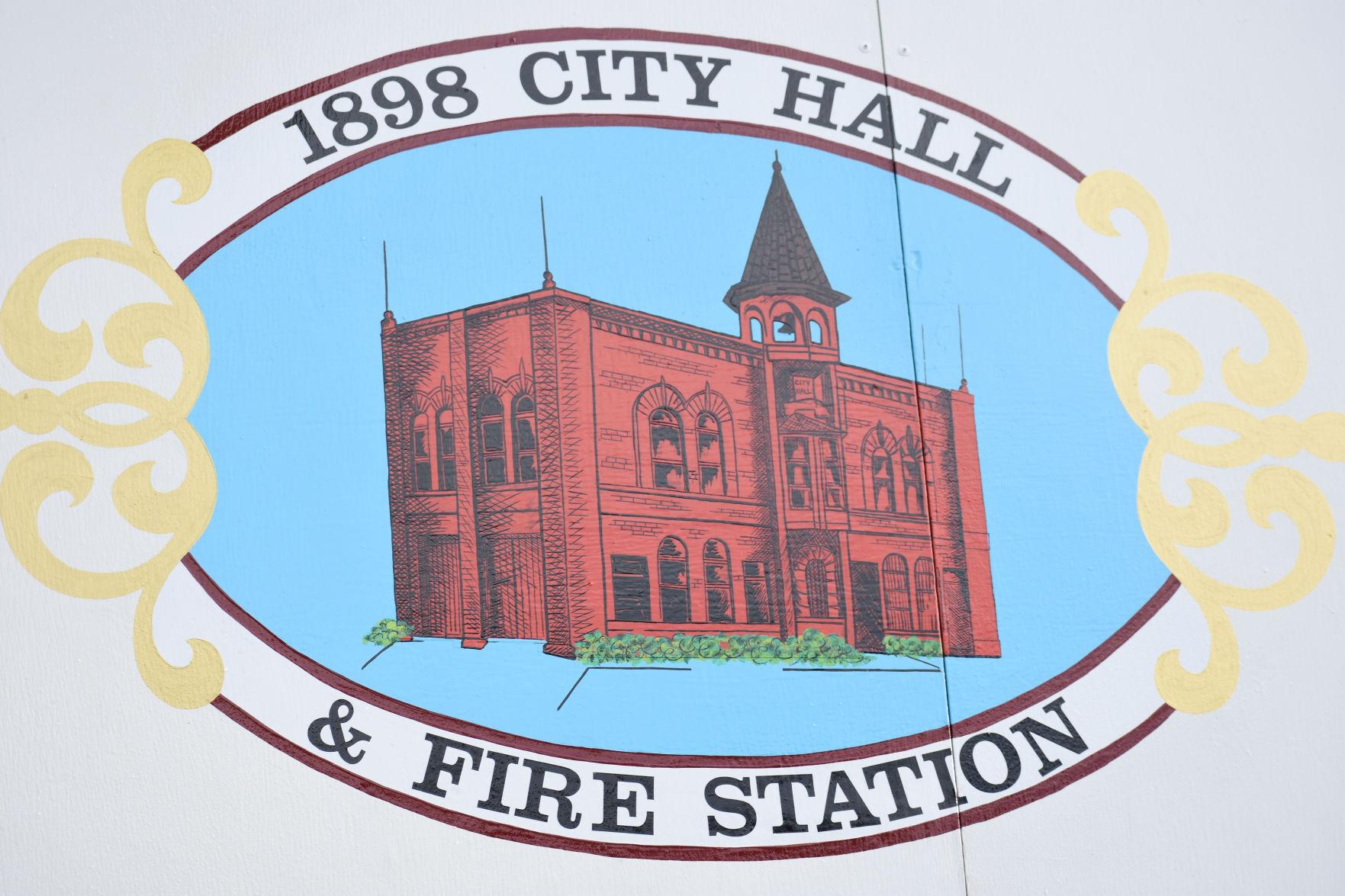 An oval on the top right-hand side of Montgomery’s mural features the 1898 City Hall and Fire Station. (Misty Schwab/Lonsdale News Review)

A separate board lists the names of donating organizations and individuals, volunteer painters, and various items to find while looking at the mural.

While the coronavirus pandemic made it difficult to gather in celebration of the new mural, which was placed in late July, Garcia hopes next year’s Kolacky Days allows for a better opportunity to come together.

Smiling, Garcia said, “I was actually kind of sad when I finished.”

A new employment opportunity for manufacturers could have a place in Lonsdale’s future, but first a purchase agreement needs approval.

Marko Popovich, AES owner, attended the Aug. 27 City Council meeting to introduce himself and provide an overview of his business to the council.

For the project, Popovich would purchase at least three acres of the Business Park for a 17,000-square-foot facility that would eventually expand to 30,000 and finally 60,000 square feet as the workload increases. To begin, the business would employ four to five workers and increase over time.

A site on Commerce Drive SE, west of Technical Methods, Inc., and another property on Pondview Drive SE, west of Dispatch Trucking, have been considered for the AES location. City staff received a purchase agreement, which they will review and send to the city attorney in an electronic format.

“We’re definitely excited, and hopefully we can get to a deal,” City Administrator Joel Erickson said at the meeting.

Popovich started AES, located in Lakeville, in 2015 and has worked in automation and machine design for 15 years. Despite COVID-19 setbacks, he said the company projects a strong 2020.

As far as employment is concerned, Popovich said AES requires welders, multiple machine engineers and a designer. Employees typically work 6 a.m. to 2:30 p.m. shifts, but Popovich said he’s willing to make adjustments in scheduling for workers accustomed to different hours. These are well-paying jobs, he said, so employees are able to afford housing in the community where they work.

Cherney asked if the noise associated with the manufacturing process would cause a disruption to surrounding businesses.

Manufacturing would happen inside the building, said Popovich, which should limit noise exposure. Employees will operate machinery and essentially conduct all work indoors.

“The only time you’ll see the product is when the doors open and it’s loaded into the truck,” Popovich said.

Councillor Cindy Furrer asked if AES will broaden its number of job opportunities in the future, to which Popovich said his company is “looking to scale up.”

“Hopefully we can get this put together,” Furrer said. “I think it will be cool to be able to say, ‘Made in Lonsdale.’” 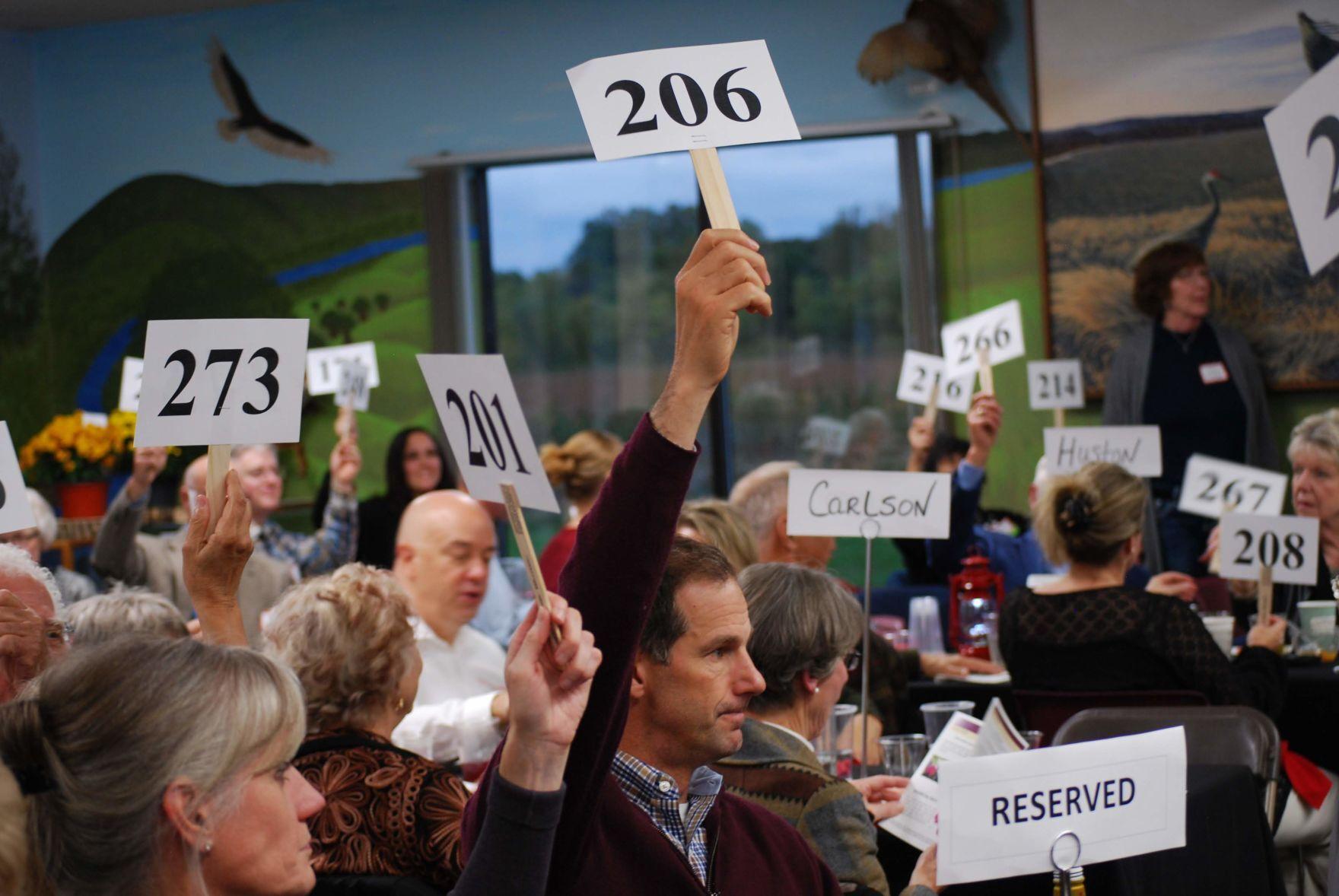 The live auction will remain a staple of this year’s River Bend Ramble — but it will be a virtual event, not in person. (Photo courtesy of River Bend Nature Center)