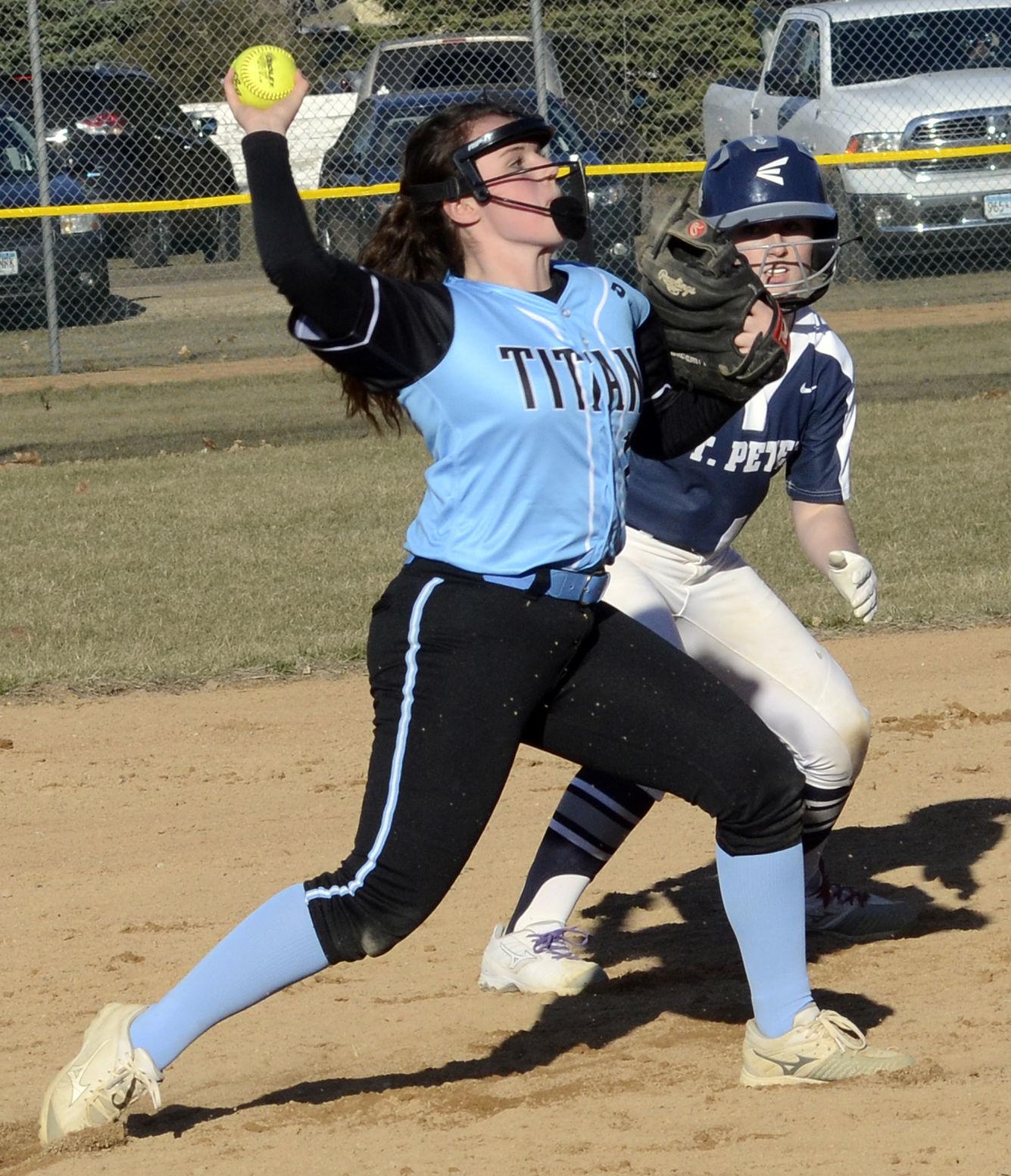 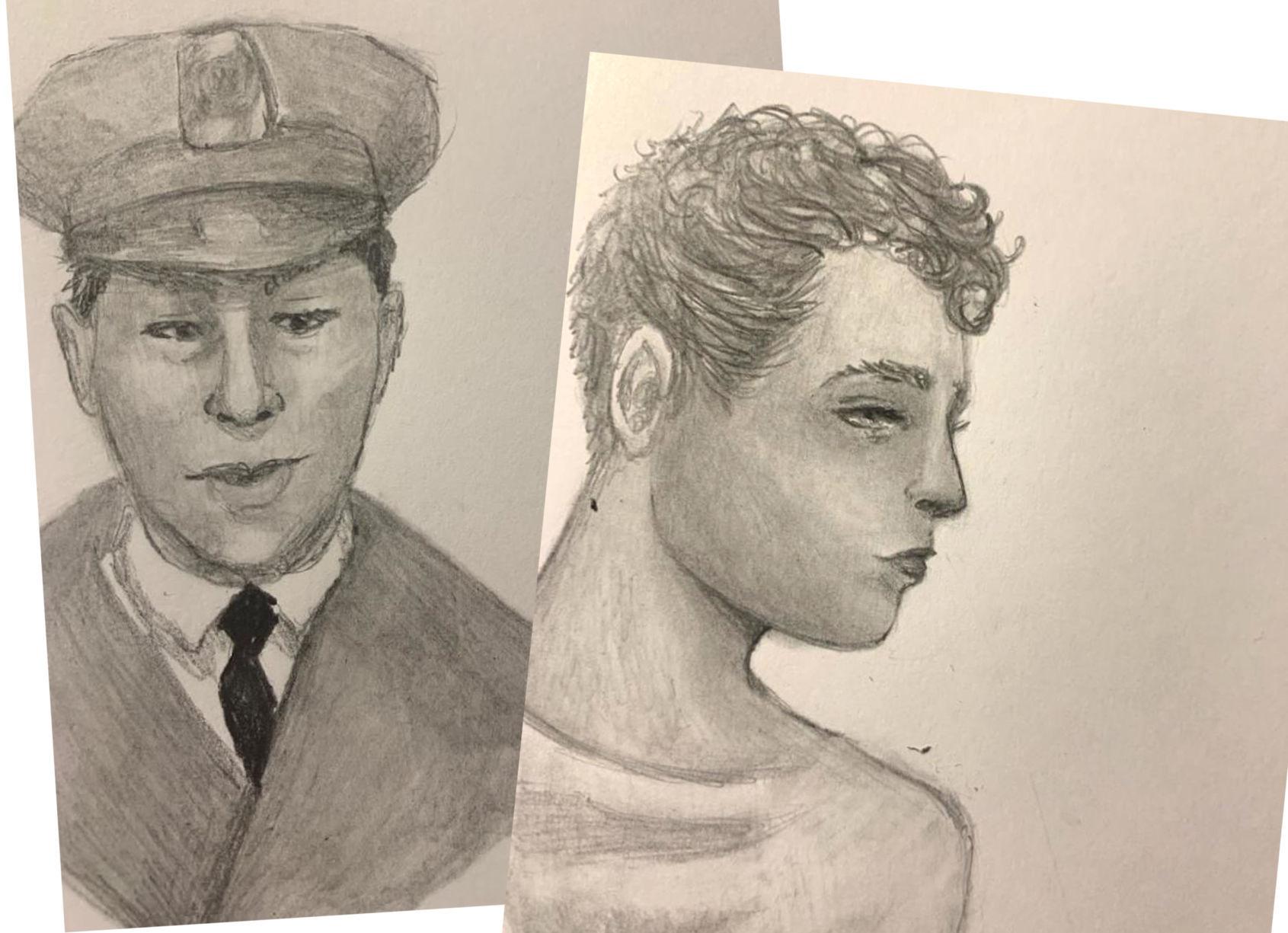 Every time one of the characters in “The Angel Intrudes” speaks on the radio show produced by Curtain Call Theatre, their drawing by performer Hailey Zurn shows on the screen. (Courtesy of Hailey Zurn)

Acting in a stage performance requires hours of time and the ability to memorize lines, and Curtain Call Theatre Vice President and Producer Bill Wencl recognizes these can be barriers for potential actors.

To offer a more inclusive performance opportunity, Wencl began brainstorming ideas for a live radio show performance in the fall. But then, because of the coronavirus pandemic, Curtain Call Theatre had to cancel its summer production of “Newsies,” opening up an earlier slot for the radio show.

“With COVID-19 happening, it just snowballed into the right time to roll it out and do [the radio show], he said.

While staying at home, actors in the New Prague, Lonsdale and Montgomery area have participated in live radio productions — without ever interacting with one another. Wencl said the plan is to release a new show at the beginning of each month.

“It’s actually gone fairly well,” said Wencl. “I hope the community finds it entertaining. I know the actors in the first one … they all seemed to love doing it. They found it to be a completely new challenge.”

Chad Prigge, one of the voice actors who participated in the first radio release, said it was a strange but cool experience to not act or react to the other actors involved in the production. Instead, he read the parts from his home and submitted them to Curtain Call Theatre President and Producer Bill Wencl, who spliced the voice clips together into a cohesive product.

“I think [Bill] did a really nice job taking all those shelter at home pieces we sent in to him to edit,” said Prigge. “ … In lieu of being on stage, this is a really, really good idea and it was just a really effortless process. I hope people are able to listen to it, and maybe we’ll drum in more of an interest.”

The first radio performance,“The Angel Intrudes” by Floyd Dell, features Kyle Yetzer as an angel searching for the human he was assigned to watch over on Earth. Prigge, who plays a New York City police officer in the production, said he was inspired by a Bugs Bunny cartoon in which he uses an Irish accent. Listeners can tune in to the show on the Curtain Call Community Theatre, Inc. Facebook page.

“These [shows] are the equivalent to a one act, so less than half an hour,” said Laura Velishek, Curtain Call Theatre secretary. “We wanted to tiptoe our feet in and see what the community thought of it before considering doing an hour or more type show.”

Velishek said volunteer actors receive scripts via Google Drive and rehearse a couple times over the phone. But instead of meeting at the same time and place every night, actors can work on their own schedules and don’t even need to memorize their lines. As time goes on, she said the board wants to find a domain for in-person social distancing rehearsals, “once it’s safe and acceptable.”

More radio productions are in the works, Prigge and Velishek are working with the board to hunt down more scripts to use for the fourth and fifth shows. In selecting future scripts, Velishek said she’s open to hearing requests from the community.

“One of the cool things about what they’re doing, especially with this genre, is many of these scripts are past rights and royalties, so they’re all accessible and free,” said Prigge. “It’s cool to go back to such an old format and not accrue much cost.”

The radio shows aren’t just inexpensive — they’re not as time consuming. Velishek said musical productions take about eight weeks to put together, and that’s not including five performances.

“That’s a really significant time commitment,” said Velishek. “These are so much smaller, and they really fit into anyone’s lives, so it’s been great to have that flexibility.”

Regardless of the pandemic, Prigge said he’s been interested in doing voice acting for the past decade. Having assisted in Tri-City Theatre productions, he spread the word about the opportunity to his students after their production of “Robin Hood” was cancelled. He hopes Curtain Call Theatre’s radio shows might provide the artistic outlet some of them might crave.

Interested in having a part in Curtain Call Theatre's radio show productions? Go to curtaincalltheatre.net or email webmaster@curtaincalltheater.com for more information.

Listen to the completed productions on the Curtain Call Theatre, Inc. Facebook page.

This article was edited Sunday, May 17 to correctly state the position Bill Wencl holds with Curtain Call Theatre. He is the vice president and producer.

Businesses that closed per government orders are starting to open their doors once again, but that doesn’t mean everything in the sector will return to normal just yet.

Gov. Tim Walz issued an executive order April 24, stating certain employees may return to work places deemed non-essential. But in order to do so, businesses need to have a plan in place that ensures the safety of employees and clients.

Although Walz’ executive order focuses on non-essential businesses in particular, the city of Lonsdale laid forth a COVID-19 preparedness plan of its own. Apart from the Lonsdale Library, all city departments are considered essential and have been conducting business as usual with precautionary measures already in place.

The plan the city developed is based on the example the state of Minnesota and the Coalition of Greater Minnesota Cities has provided. During Thursday’s City Council meeting, City Administrator Joel Erickson described the contents of the plan.

The city continues to encourage employees to stay at home if they feel sick and notify their supervisor at once. The expectation is especially true for those who experience symptoms of COVID-19 and test positive for the virus. Workers with coronavirus symptoms who haven’t been tested must return to work after 72 hours without a fever and at least seven days after the last symptoms subside.

Those who do test positive for the virus must receive two negative tests, taken 24 hours apart, and have no fever before returning to work. Anyone who tests positive but experiences no symptoms are expected to stay in isolation at least three days and return to work seven days after the first positive test, as long as there are no subsequent illnesses or new symptoms to report. In any case, impacted individuals are instructed to follow the guidance of their healthcare providers.

Those who come in contact with the virus (in example, if a worker lives with someone who has tested positive) must notify their supervisor, leave work promptly, self-isolate for 14 days following the exposure, avoid people at high risk and self-monitor symptoms.

Workers who travel to or from another country are also expected to quarantine 14 days after returning and practice social distancing.

The city has already implemented procedures for reducing the spread of COVID-19. That includes following basic hygiene protocols like hand washing and cleaning keyboards, phones, and other frequently touched items. Workers will continue standing/sitting six feet apart at least and use personal protective equipment (PPE) as necessary.

Councilor Steve Cherney asked during the meeting if the City Hall will be required to have shielding up at the front desk, if masks will be available for those who enter the facility and whether or not floor markings will indicate how far apart individuals can stand.

Erickson said staff purchased shields for the front desk and intends to make markings on the ground, but he doesn’t anticipate City Hall providing masks for people to wear. Visitors can, of course, wear masks if they choose and are encouraged to do so.

As far as elections go, Erickson said he strongly encourages residents to vote absentee rather than going to the polling place, because the lines will be longer than usual due to social distancing measures. Residents may start requesting absentee ballots now, by going online to mnvotes.sos.state.mn.us/VoterStatus.aspx. 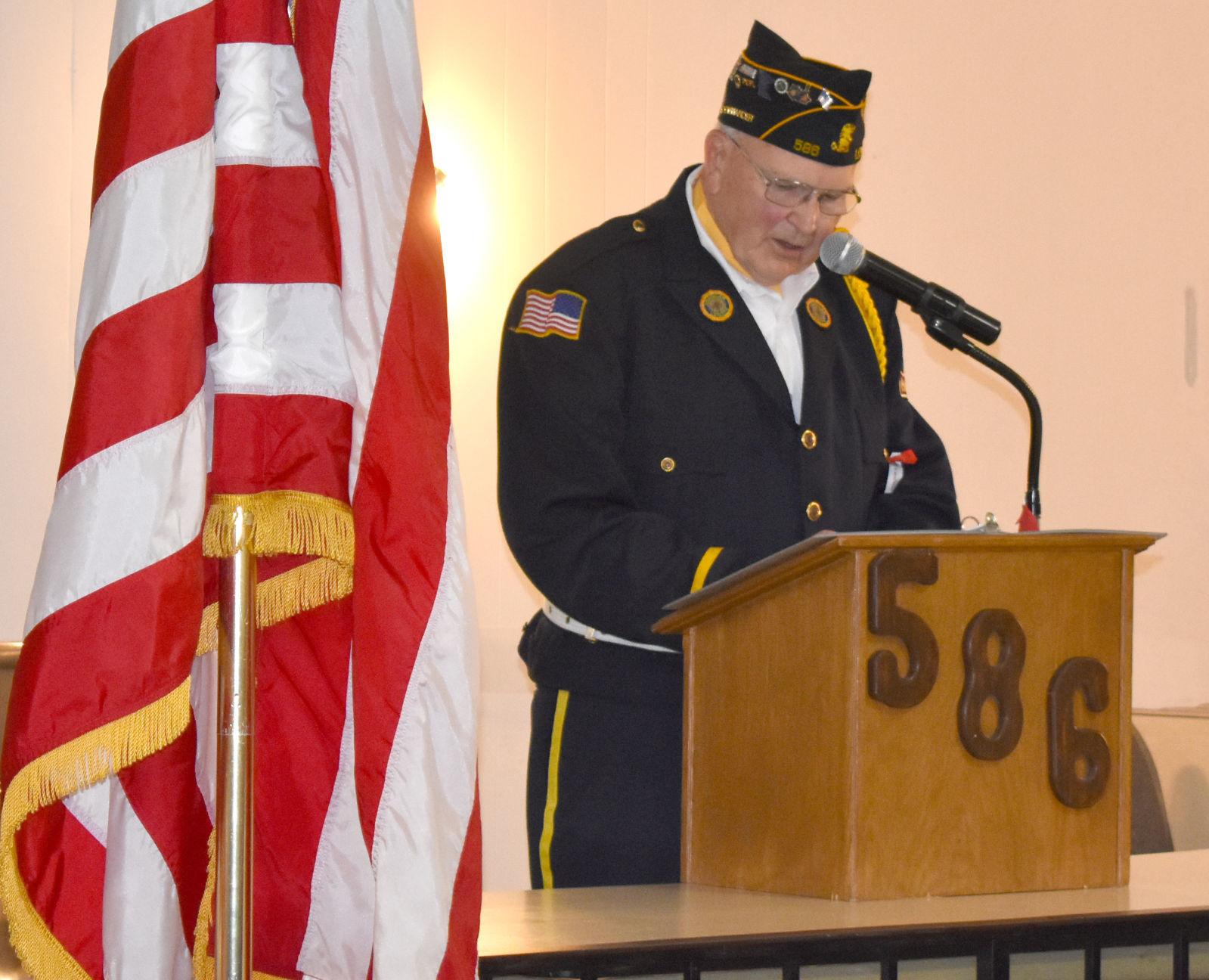 Commander Daryl Rieck delivered the welcome, announcements and history of Memorial Day at the Lonsdale American Legion during its annual Memorial Day ceremony in 2019. This year, the cemetery services will continue as usual but the program at the American Legion has been cancelled due to COVID-19. (News Review file photo)

Old business with the former Taste of Lonsdale restaurant has been finalized now that former owners Brian and Claudia Otto have agreed to pay the city and EDA a settlement of $39,000. The Taste of Lonsdale closed in November 2018, and the Ottos stopped paying back the loan soon after. (News Review file photo)

Owners of a Lonsdale restaurant that closed in November 2018 have reached a settlement agreement with the city and Economic Development Authority after failing to pay off the loan agreement.

During its Thursday online meeting, the City Council unanimously approved a resolution allowing the city of Lonsdale/EDA to enter into a settlement agreement with the Taste of Lonsdale and its former owners, Brian and Claudia Otto. Under the agreement, which the Ottos proposed, the Ottos will repay the city/EDA $39,000.

On Sept. 29, 2017, the Ottos entered into a 60-month loan agreement with the EDA/city of Lonsdale to borrow $39,489. The Ottos used the loan to make a down payment on the property used for Taste of Lonsdale, buy business equipment and use it for working capital. In exchange, they agreed to make 59 payments of $363.35 as well as a balloon payment of $21,000.

The Ottos provided their private New Prague residence as collateral, a decision that could have resulted in them losing their house to foreclosure as a consequence of not paying back the loan. Shortly after Taste of Lonsdale closed in November 2018, the Ottos stopped making payments. The EDA motioned to demand the total unpaid balance due immediately, and staff worked with the Ottos to try to refinance their house, but ultimately the unpaid loan resulted in the city/EDA filing a lawsuit against the Ottos and the Taste of Lonsdale.

City Administrator Joel Erickson said he calculated the amount of the principal balance due, as well as the legal expenses and late fees accrued, and named the total just over $47,000. The total outstanding balance for the loan payment was just over $35,000. Erickson said in accepting the payment of $39,000 from the Ottos, the city would not recover about $8,600 in legal fees associated with the matter. The city/EDA agreed to waive the Otto’s late fees, which totaled between $850 and $900.

“I think that’s more than fair,” said Mayor Tim Rud in regards to the settlement. “In fairness to Ottos … you have to give them credit for certainly trying. I, myself, think this is a pretty equitable outcome for this situation.”

Council member Steve Cherney was at first reluctant to vote in favor of the settlement, particularly the mitigation of the legal fees. He was initially concerned about setting a negative precedent, but Rud and other council members disagreed.

“I think we settle and move on,” said Rud. “Attorneys will just keep racking the bill. I strongly think we should settle.”

Added Councilor Cindy Furrer: “Being involved with the project since the very beginning … this has dragged on a long time. I think taking the $39,000 is the best option for us. We have had other loans where we took it to court and got nothing.”

Erickson also said when he first talked to the Ottos about negotiating the settlement, he sent them the full amount owed and they offered what they could. After hearing Rud and councilors’ perspective, Cherney recanted his no vote and made the motion to approve the settlement as written.

Based on the agreement, the Ottos will pay the $39,000 before the scheduled May 21 court hearing.