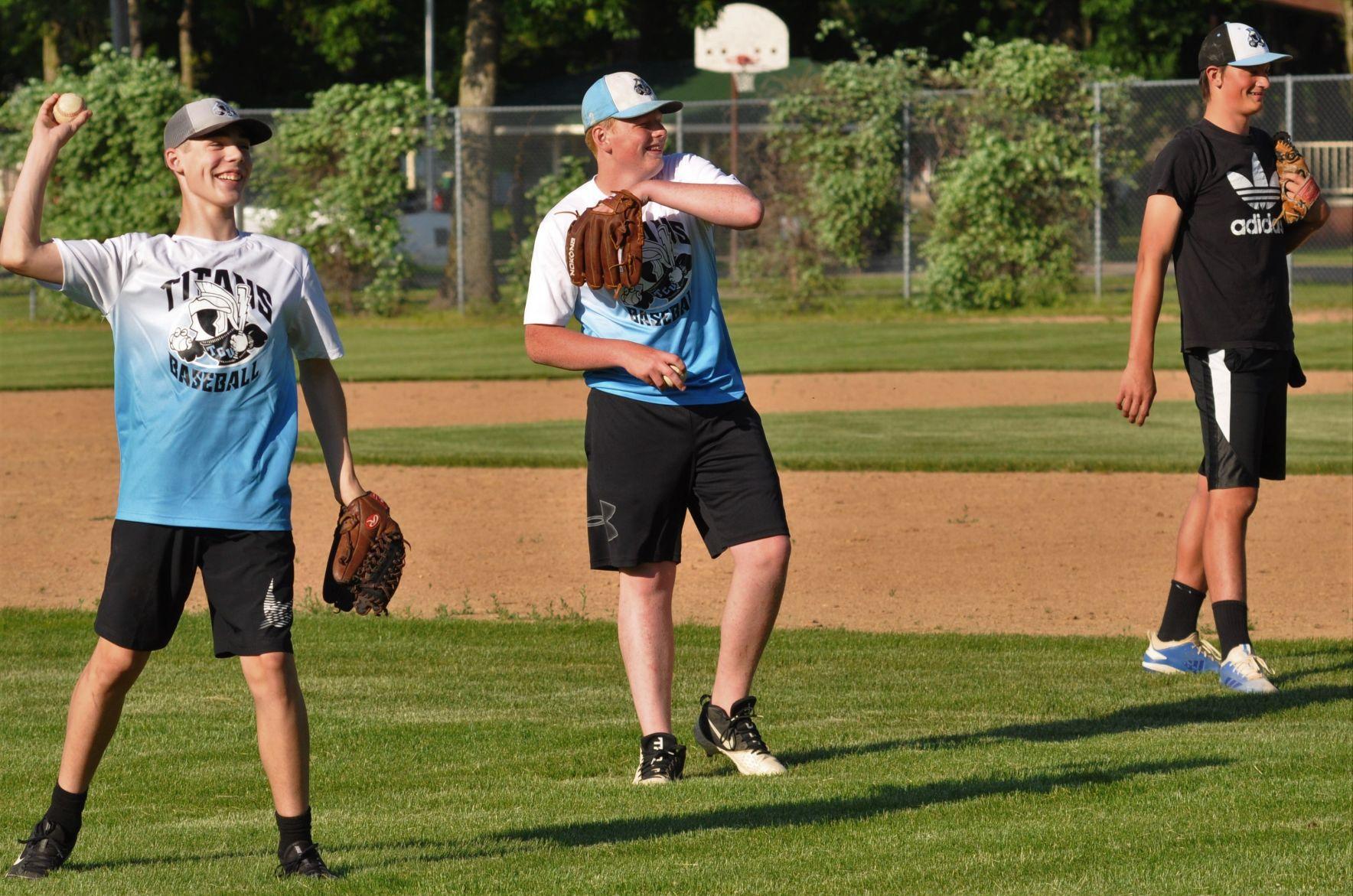 Megan Gordon is the Lonsdale resident who made food trucks possible at Jaycee Park throughout the summer. Gordon is pictured by the Sandy’s Grill food truck, where she bought a Chicago hot dog. (Photos by Misty Schwab/Lonsdale News Review)

A food truck event in Lonsdale was scheduled to begin at 4:30 p.m. Monday, June 15, but crowds were lined up at Jaycee Park well before then. 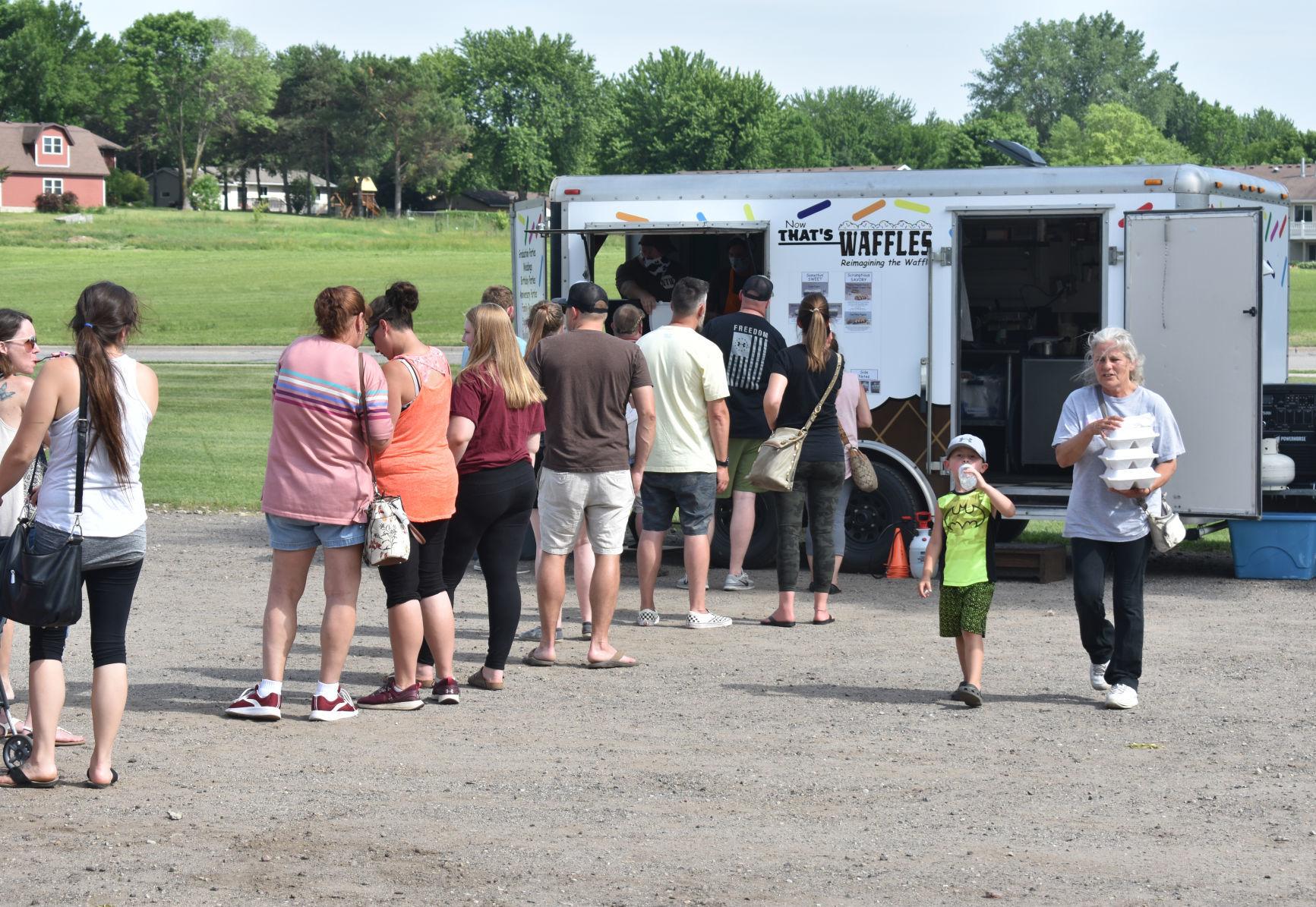 A long wait didn’t discourage Lonsdale residents from lining up by the Now That’s Waffles food truck in Jaycee Park Monday, June 15. Some customers even brought boxes home to enjoy another day.

“It’s genius,” said Joy Vosejpka of the food truck event. “It gets everyone outside.”

For Vosejpka, traveling from Montgomery was worth it to grab some food from Jaycee Park. She and her children, Jaxson and Ruby, enjoyed Fudge Puppies while sitting on a park bench. 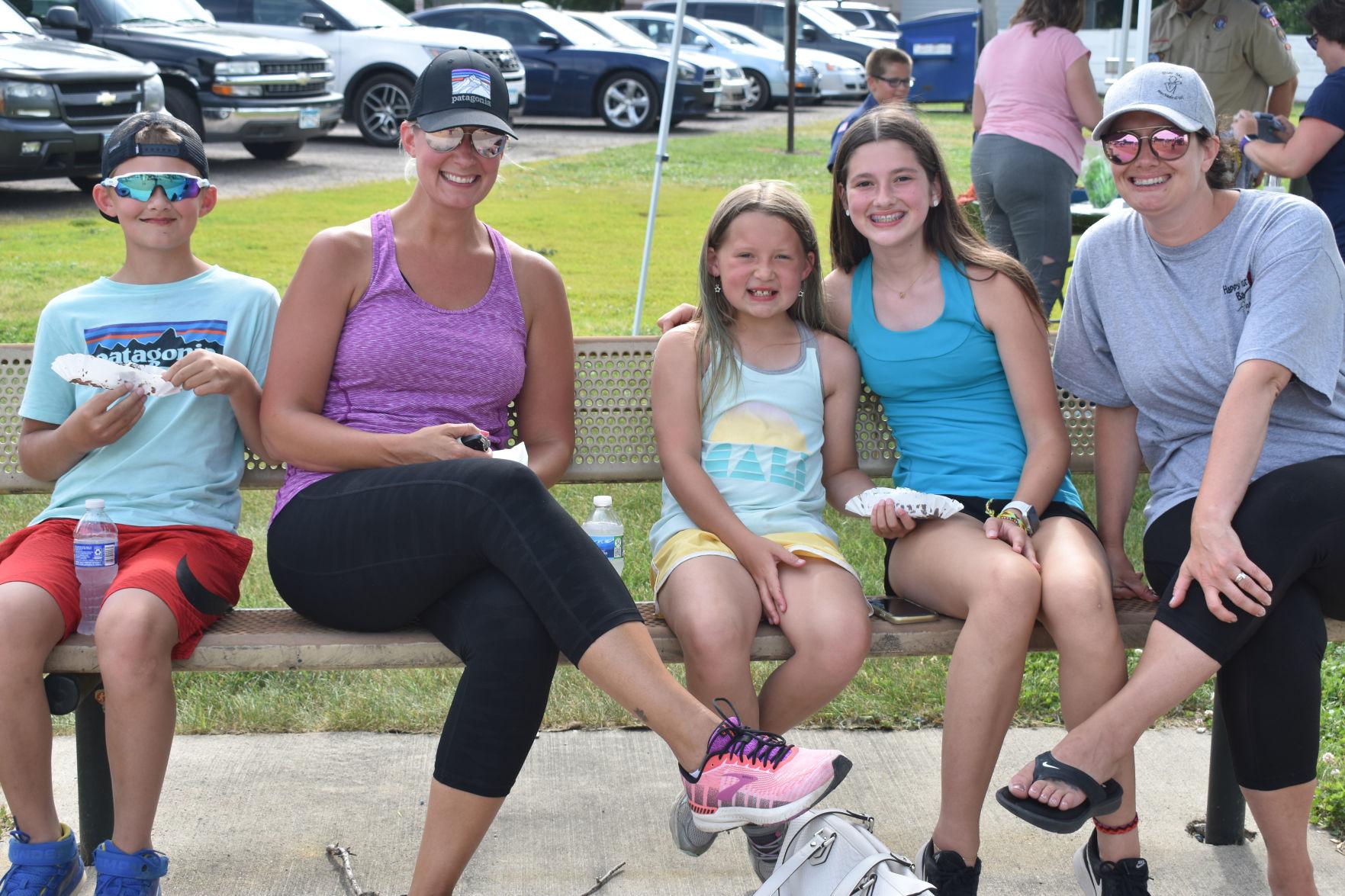 “We don’t have a wide selection of places to go in Lonsdale, so this is something different,” said Debbie Efta while waiting in line at the Now That’s Waffles food truck.

Megan Gordon, owner of the small business Camouflage Cleaning, made the food truck event possible for two days so far and plans to host more events this summer. Gordon recognized a number of companies and small businesses have struggled to make ends meet during the coronavirus pandemic. She also knew residents were disappointed about the cancellation of Community Day as well as the county and state fairs. She wanted to create an event of some sort that could benefit small businesses and give community members an opportunity to enjoy their summer. With limited take-out options in Lonsdale, she also wanted to include food in her plan without interfering with the grand opening of the new Smoke BBQ restaurant.

While visiting Lakeville, Gordon stopped at a food truck event and found out how to bring vendors to Lonsdale. She proposed her idea to the City Council, chief of police and Park Board before she got permission to rent out Jaycee Park. From there, she contacted food trucks via Facebook.

The second time she hosted the event in Jaycee Park, she invited Sumo Egg Rolls of St. Paul, Now That’s Waffles of Isanti and Sandy’s Grill & Italian Ice of Minneapolis to offer their services. In the future, she said Ettlin’s Café in New Prague will have a food truck set up at Jaycee Park. 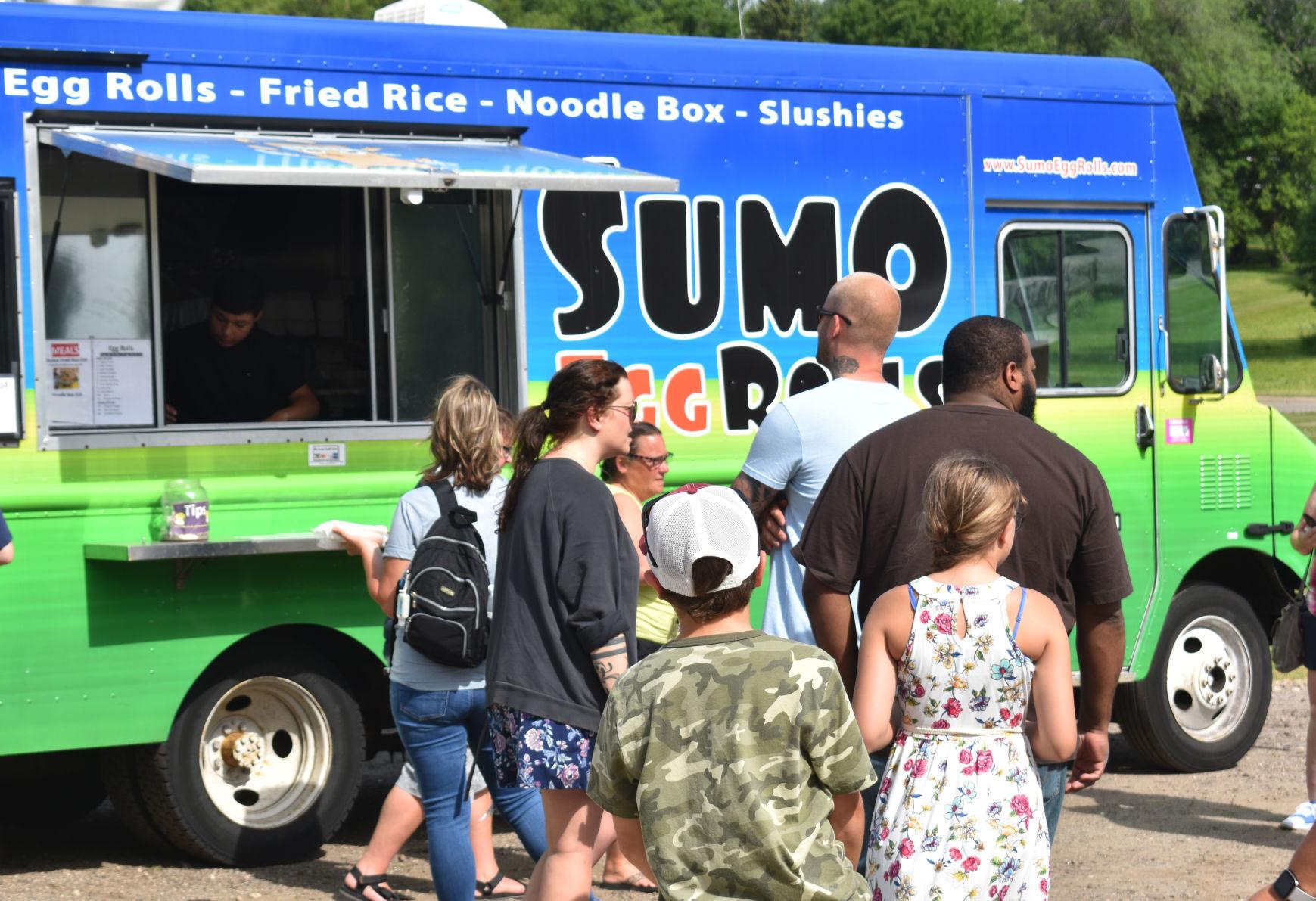 The Sumo Egg Rolls food truck made its way to Lonsdale Monday, June 15.

“It seems like a lot of people have shared my post, and people are really excited about it,” said Gordon. “It’s different. Lonsdale has never done anything like this before, and I’m really glad they’re allowing me to do it.”

Barry Schmidt, who recently retired as an ag teacher at TCU High School and the district’s FFA advisor, has witnessed a number of successes from his students. He’s pictured here with former student Kendra Blaschko.

Barry Schmidt, who recently retired, wasn’t afraid to joke around with his students as an ag teacher or FFA advisor. He’s pictured here with former student Denise Reeser. (Photos courtesy of Lisa Hoefs)

Students who took agriculture classes at Tri-City United High School (originally Montgomery-Lonsdale High School) over the past three decades likely associate their experience with Barry Schmidt, who taught ag and advised TCU FFA the past 30 years.

Now retired, Schmidt completed his last official day with the district June 1. The legacy he leaves behind is one his former students and colleagues cherish, and his example continues to inspire them in their own roles in agriculture.

“Barry has always been a great mentor for me,” said Lisa Hoefs, who previously co-advised TCU FFA with Schmidt. “He’s going to be missed by a lot of students and families and co-workers and other ag teachers … I have a great respect for Barry, and we’re going to miss him in the classroom, but I’m really excited for his new adventure in retirement. I have nothing but good things to say about Barry.”

Now a Medford ag teacher, Hoefs remembers Schmidt being a mentor to her from the start of her career in Waseca. Schmidt taught ag for Montgomery-Lonsdale at the time, and he was part of her network of ag teachers.

What makes Schmidt a great mentor, said Hoefs, is that he willingly shares his knowledge and has fun while working hard. He played games with his students and continued learning in the ever-changing world of agriculture.

Samantha Ruger, president of the TCU Area FFA Alumni Association, said she admired Schmidt for pushing his FFA students to get involved and participate in contests. Students wanted to take his classes at TCU because he made learning fun by joking around with his students.

“He was one teacher you always wanted to be around,” said Ruger. “… Kids wanted to be in FFA because he was in charge. FFA was really big when I was in school, and he was one of the reasons why.”

Schmidt has been involved in agriculture all his life. He grew up on a farm in southern Minnesota and worked at a feed, seed, grain co-op for a couple years before he returned to school to become an ag educator. He began his career with his time split between New Prague High School and what was then known as Montgomery-Lonsdale High School. After a couple years, he became the full-time ag teacher in Montgomery.

Over the years, Schmidt said the ag program evolved from a focus on ag production to a broader spectrum of topics like plant, animal and food sciences. Schmidt especially enjoyed animal science and also grew fond of teaching mechanical classes.

Being able to tie some of these subjects into FFA, which he advised, was a bonus.

FFA gave Schmidt the rare opportunity to connect with his students outside the classroom. Since participating in livestock shows and other contests, some of his students have become veterinarians or owners of their own farm operations.

He’s advised FFA students that achieved success as teams and individuals, some even on the national level.

“I liked seeing where life takes them,” said Schmidt of his students. “Some didn’t really necessarily enjoy school too much, but now I’ll see them five, 10 years out of school and fairly successful with what they’re doing.”

Over the years, Schmidt has been instrumental in leading programs like trick-or-treating for the food shelf, when FFA students collect canned goods on Halloween night. He’s also made baby animal day possible for TCU elementary students across the district and added a hay ride to the day trip.

Schmidt said he’s appreciated the community and businesses’ support of the FFA program throughout the years and believes that support to be crucial in the program’s success.

“I hope they continue to be successful and continue to be part of their communities,” said Schmidt of those involved with the FFA program. “… I look forward to seeing where it goes.”

During his retirement, Schmidt plans to work part time and travel to visit his daughter Stephanie in Chicago and his daughter Kaitlyn in China, where she teaches. He and his wife, Nancy, plan to stay in the Montgomery area for “at least a few years.”

Minnesota health and education officials on Thursday asked school administrators to plan for three scenarios on reopening in the fall, and promised a decision by the week of July 27 on which of the three will be used.

K-12 schools will be restarting under the cloud of the coronavirus. The state Health and Education departments asked administrators to prepare for in-person learning for all students; hybrid learning with social distancing and capacity limits; and distance learning only.

“Decisions around the fall may change as we learn more about which scenario will be in the best interest of public health, and specifically the health and safety of our school communities,” the Department of Health said in a statement that included a link to a 16-page document guiding schools.

The Department of Education published a more extensive 100-page document.

Tri-City United Superintendent Teri Preisler said the district’s leadership team of principals and directors, with teaching staff representatives at each level, have reviewed and developed distance learning models to implement in the upcoming school year if needed. The hybrid model, which will combine distance learning with classroom learning, will be a bit more complex. Plus, making it possible for 50% occupancy at each school and 50% occupancy in transportation, she said, “is going to really take some deep work.”

With more information available from MDE and MDH, Preisler said the district is collecting parent input to help the leadership team know what to expect in the fall. Surveys will determine how many families intend to send their children to school and which families will need distance learning models.

Preisler, who retires July 1, has been in communication with Lonnie Seifert, who will succeed her as TCU superintendent mid-summer. The two will meet the week prior to the change to discuss the transitional pieces and include new principals at TCU Lonsdale Elementary and TCU Montgomery as well as the new TCU High School assistant principal.

Republicans quickly criticized the state for waiting until late July to make a decision. Rep. Ron Kresha of Little Falls and Rep. Sondra Erickson of Princeton, the GOP leads on a pair of education committees, said in a statement that locally elected school boards and superintendents should be allowed to “chart the best path forward.”

“Let’s let our local schools take the lead so our students and their families have the clarity they need for the fall,” they said.

The numbers of new virus cases and hospitalizations in Minnesota have been leveling off lately.

Gov. Tim Walz gave the order in mid-March for Minnesota public and charter schools to close and switch to distance learning as coronavirus cases were just starting to show up in the state. That order affected nearly 900,000 students and their families. The governor followed his school closure order with a statewide stay-at-home order later in March.

The governor later extended the closure through the school year, and essentially banned large-scale high school and college graduation ceremonies for the class of 2020 as the number of coronavirus cases in Minnesota grew.