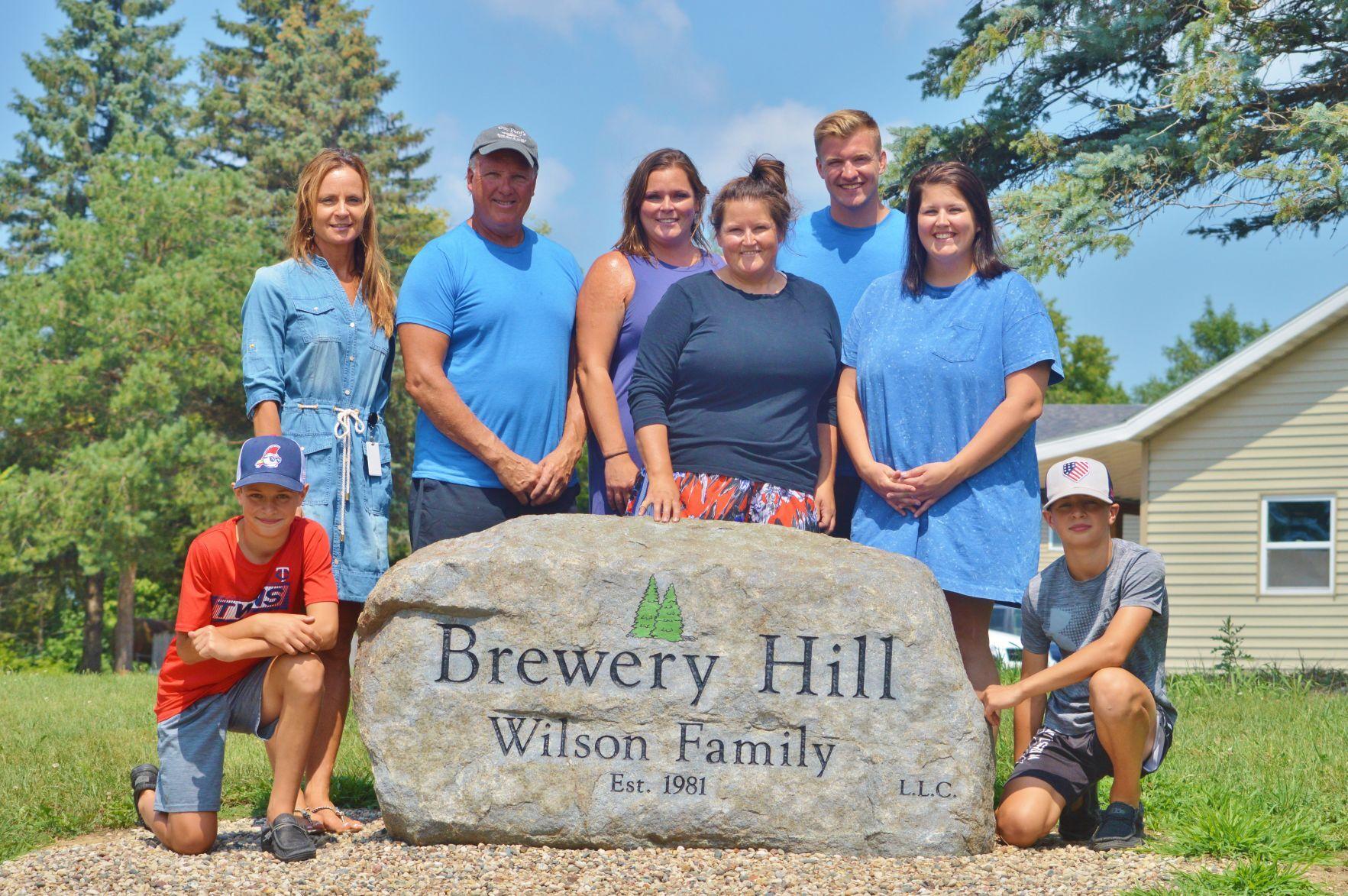 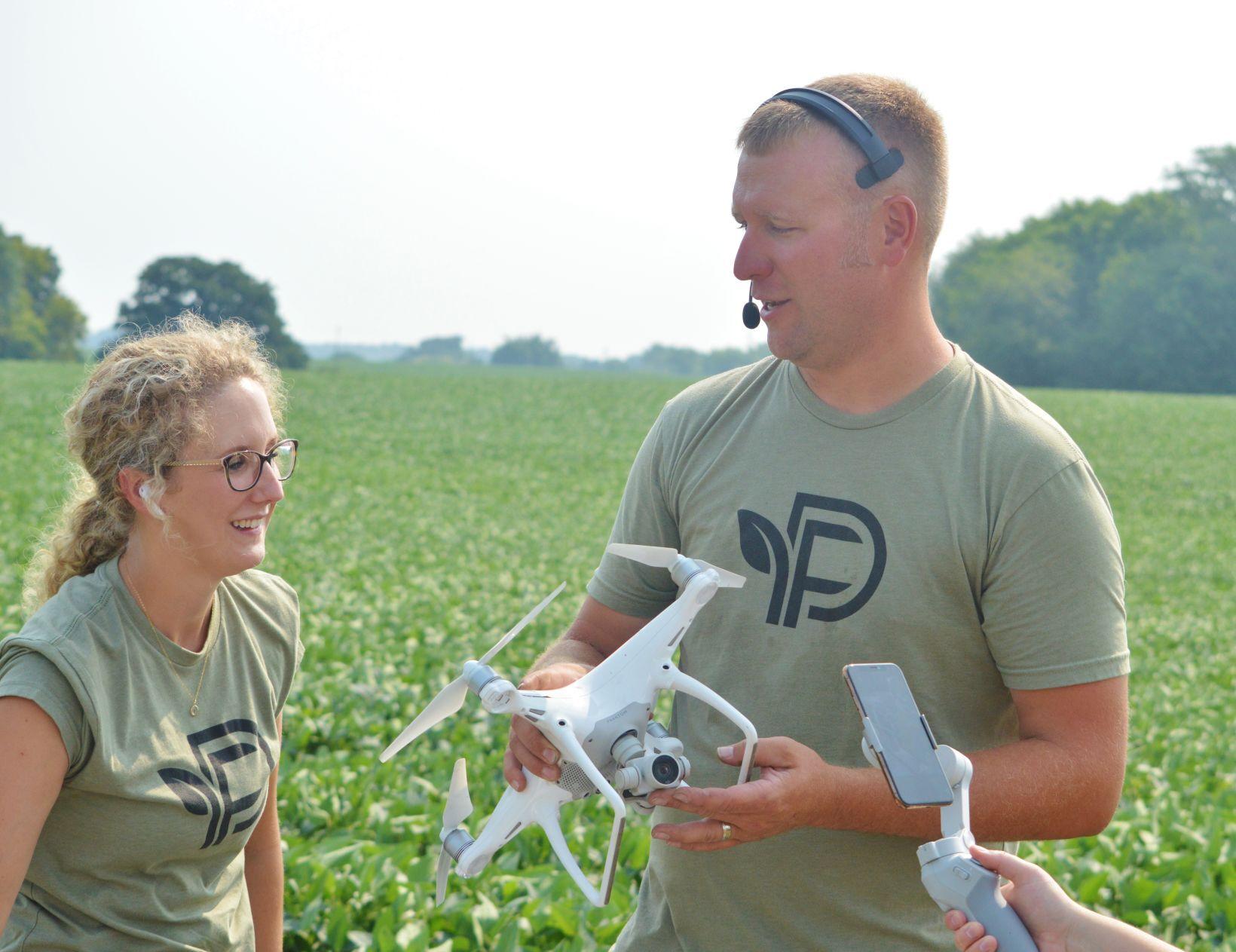 Ryan and Emily Ponwith led teachers on a virtual tour of their farm to inform them about agriculture in Minnesota. Ryan is pictured holding a drone the farm uses to get a birds eye view of any irregularities among the crops. (Carson Hughes photos/southernminn.com)

There’s no better way to learn something new than experiencing it, so when education specialist Emily Ponwith wanted to strengthen agriculture curriculum in the classroom, she and her husband and Cleveland farmer Ryan Ponwith decided to give teachers a firsthand view of what farm life is all about.

On Tuesday, the Ponwith Family Farm in Cleveland was the last stop in a virtual agriculture tour for instructors. More than 60 teachers from across Minnesota participated in the summer tours organized by Minnesota Agriculture in the Classroom.

The tours began on June 15 with the “Wheat — From the Farm to the Plate” tour, which included visits to wheat farm, Northern Crops Institute in Fargo, North Dakota, the Bakers Field Flour and Bread bakery in Minneapolis and a virtual cooking class with professional chef Joel Gamoran.

Then on June 22, educators visited the soybean farms at Northern Crops Institute and Featherstone Farm near Rushford, Minnesota. And the “Sota Grown Food Pod” tour focused on a hydroponic container farm in Wadena, Minnesota.

Teachers then finished their summer crash course at the Ponwith Family Farm for the “Soil Fuels Success” tour, where Ryan and Emily Ponwith presented educators with a deep dive on how to till, fertilize and use soil on their farm.

The Ponwiths were not only a stop on the tour, they also helped organize it. Emily Ponwith serves as South Central Minnesota Regional Ag Curriculum Specialist for Minnesota Agriculture in the Classroom. 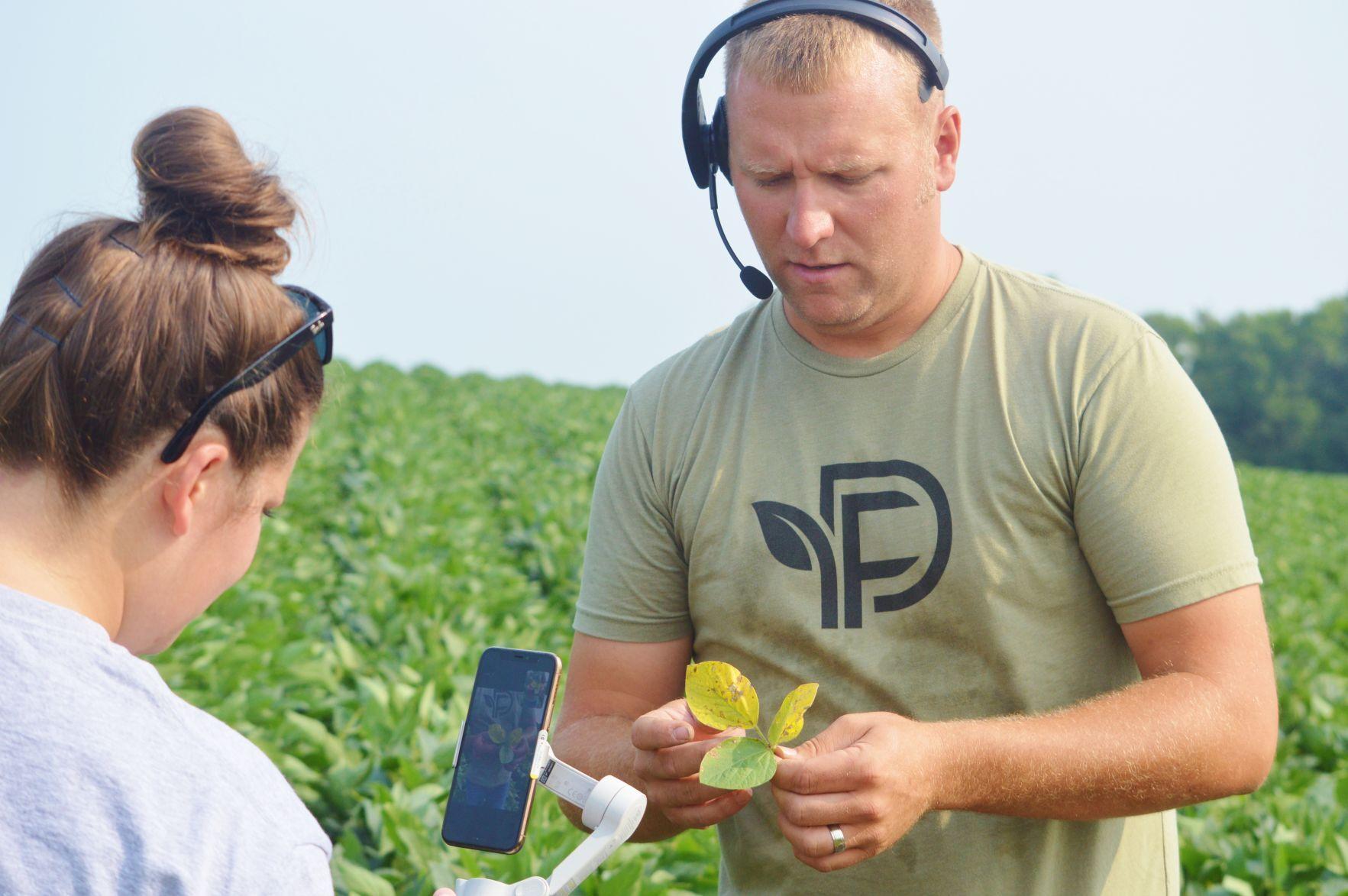 Ryan Ponwith talks to a virtual room of teachers through his headset and a cell phone camera about a diseased soybean. (Carson Hughes/southernminn.com)

“I thought ‘Where better to bring them than our farm where we can showcase some of the amazing hard work that my husband and his dad have been pouring into this operation and ultimately the world,’” said Emily. “I think we’re very innovative in our strip tillage and how we manage our soils and our crops, so I wanted to make sure we were able to showcase that to teachers and help them bring that knowledge to the learning space.”

Due to the COVID-19 pandemic, the tour was held virtually, rather than in person, but teachers still received a close up of the farm, which has been in the Ponwith Family since its foundation in 1862. The Ponwiths were among the earliest settlers in Cleveland, and the farm has passed down through the generations since then.

Through the lens of a phone camera, Ryan and Emily Ponwith took the teachers on a tour of the machinery they use to till, the nutrients they add to the soil and a close up look at the fields and other agricultural equipment. Teachers also learned about how crop rotations are used to maintain soil structure, how soil temperature and nutrients, such as nitrogen, phosphorus and potassium impact growth, and how drone technology is used on the farm to monitor damage and aberrations in the field.

Ryan Ponwith is well versed in the use of soil agriculture, not only from his lifelong experience of growing up and working on a farm, but also his 10 years in ag retail. He wanted to help teachers understand that growers utilize a wide range of scientific, mathematical and financial knowledge in the profession.

“We want to be the ones who tell agriculture and our story, rather than somebody telling it for us, with their own agenda,” said Ryan. “We want them to hear it from the source.” 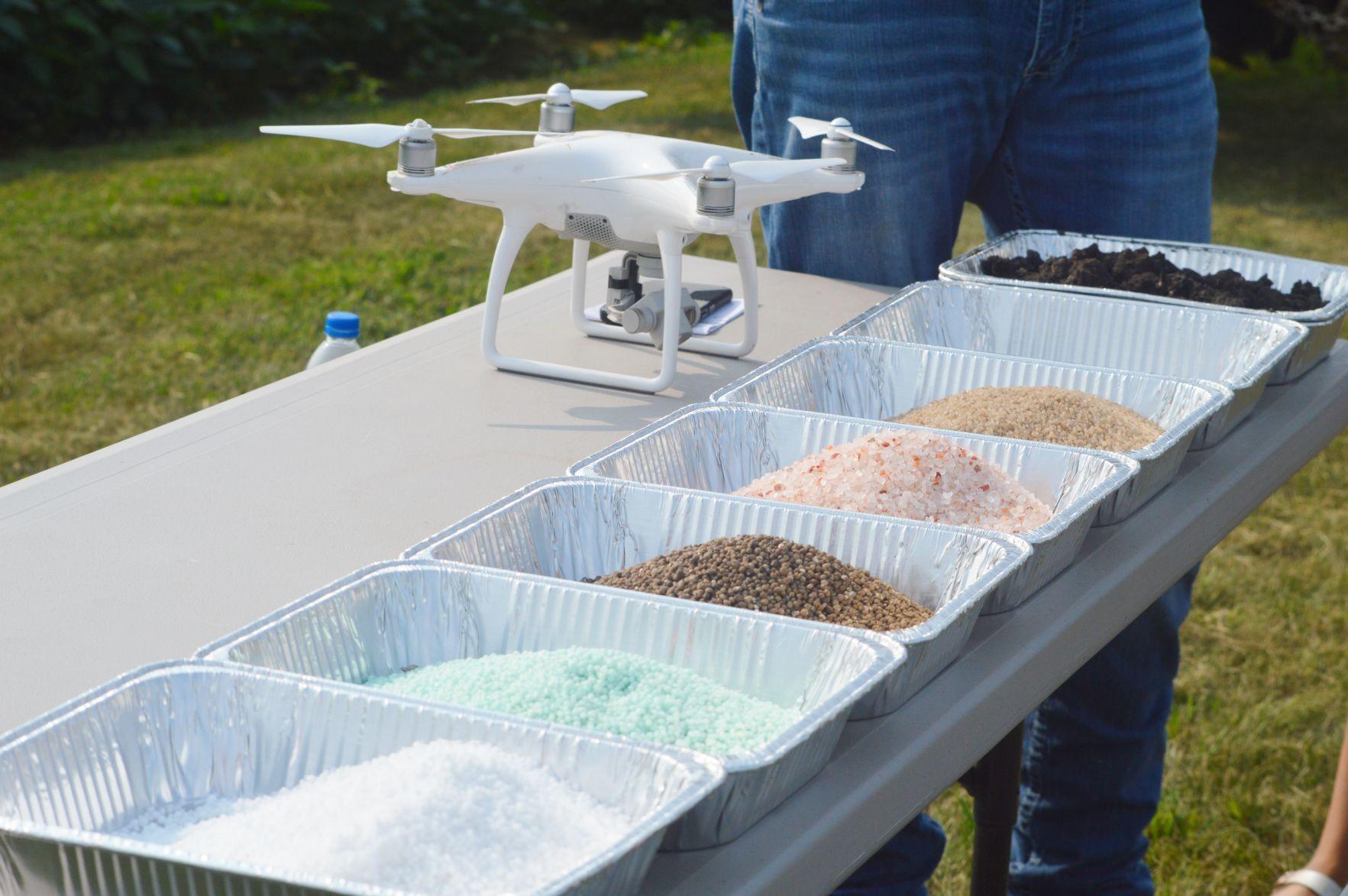 The Ponwiths put a variety of soil nutrients such as pot ash and mono ammonium phosphate on display for educators.

Emily Ponwith added that there’s a disconnect between farmers and consumers, especially when people are further removed from the ag business. MAITC programs, like the summer tour, seek to bridge that disconnect by offering teachers and students a better understanding of agriculture practices and the careers in the field that exist outside of farming.

“Each generation is further and further removed from the family farm, even in a region that’s agriculture heavy like southern Minnesota,” Emily said. “Many of them didn’t even know what agriculture even meant. They didn’t know what a combine was used for. They didn’t maybe believe that I was a farmer, at first, because I didn’t look like a farmer when I was a teacher at school.”

“Minnesota Agriculture in the Classroom, their mission is agriculture is valued by all,” Emily added. “I think that shows how dedicated our team is to providing quality educational experiences, not only for students, but also for teachers.” 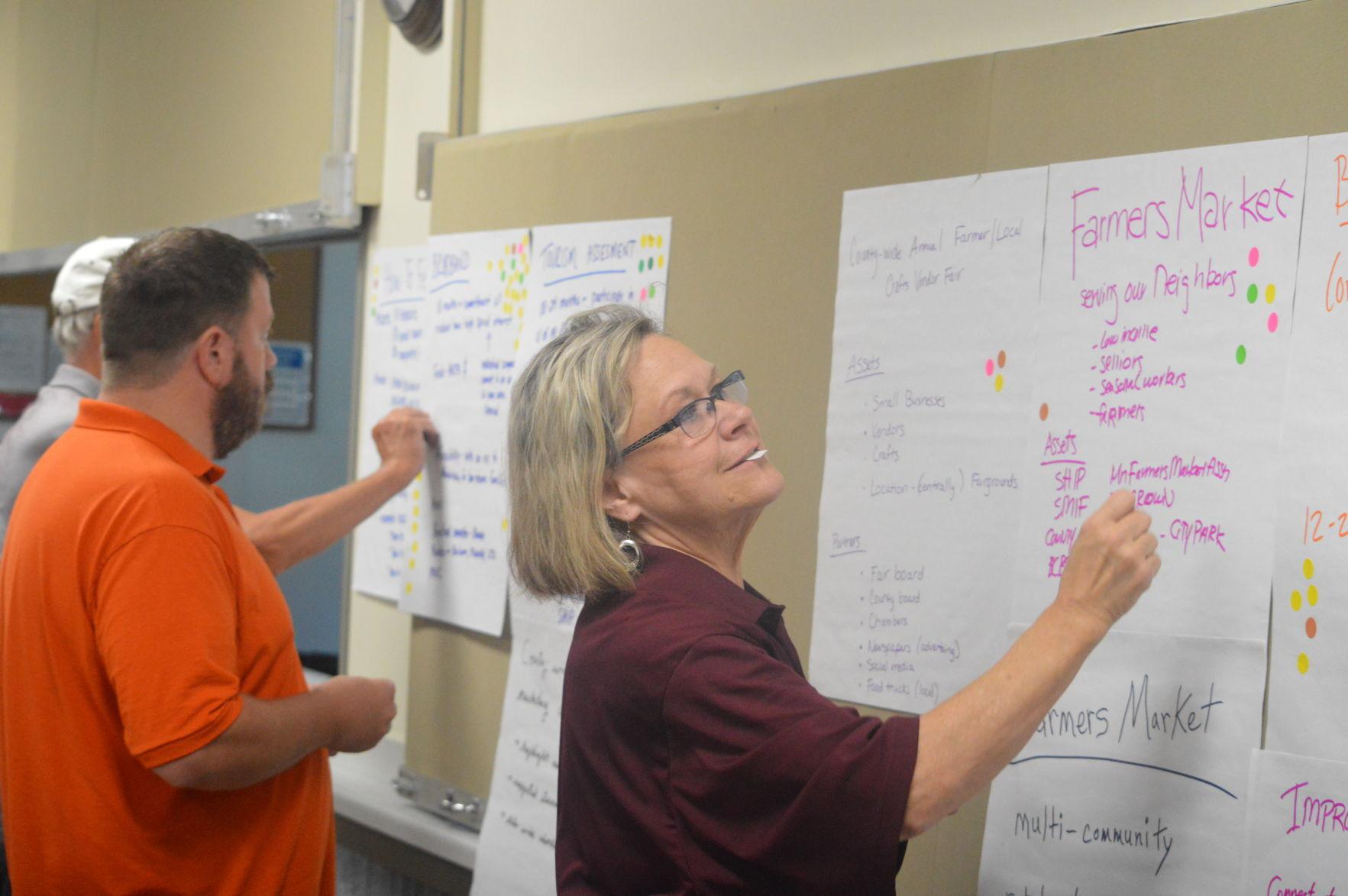 Building out broadband connections, linking communities with trails, promoting tourism and more were on the minds of the community on July 15.

Using community insights, a steering committee of county leaders will develop projects to be completed within the next one to two years focused on strengthening the county’s economy. Before providing feedback, participants took part in an asset mapping of the community. Hosts told the attendants to list assets within the community that could serve as a draw for business and new families. Participants also listed organizations and individuals who could be a source of funding for community development projects. From there, attendants formed discussion groups to develop ideas to be voted on by the larger committee.

“Doing the asset mapping really was a learning experience, because there were so many different people here from different places in the county that were here for different lengths of time,” said Meg Stuedeman, a farmer from Derrynane Township. “Some people were born here, some just moved in, so I was surprised by a lot of the assets that came up.”

Each member of the community shared their own ideas on assets to highlight from natural resources to local business, broadband, housing and more. Together, the community developed around 11 different ideas, but participants just had three stickers to select their top priorities. 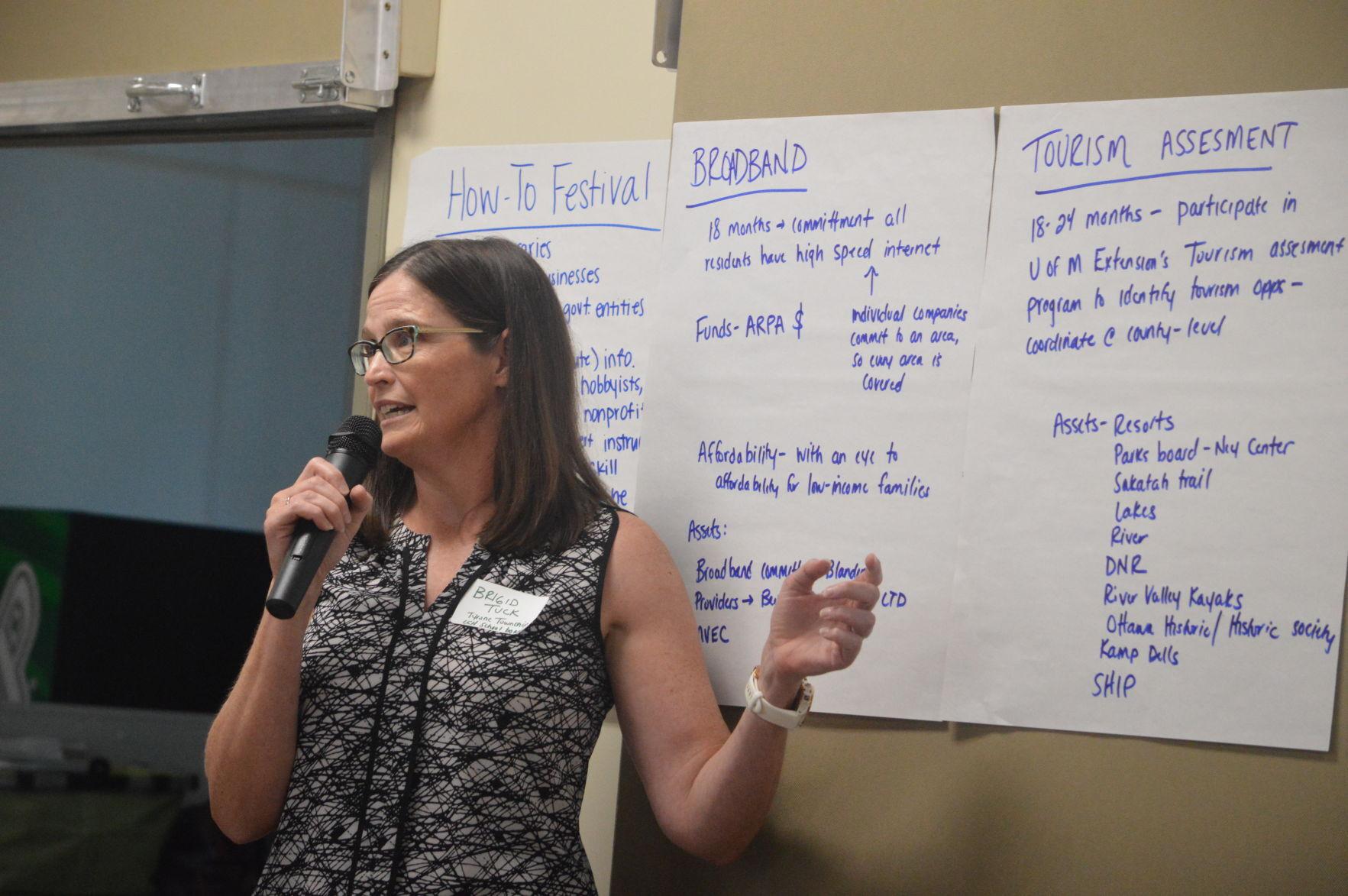 Brigid Tuck talks to the community about her discussion group’s ideas for economic development in Le Sueur County. Each group presented their proposals before the forum picked their favorites. (Carson Hughes/southernminn.com)

“I’m a farmer, so I’m very interested in agriculture remaining strong here. It’s a big asset both for and for financial resources,” said Stuedemann. “I also think it can be a big draw for agritourism. You can draw people from urban areas who want to experience agriculture, whether that’s education, farm tours, doing farm stands, that’s a really nice way to integrate our environment and economy together.”

Topping the community’s list of priorities was ensuring high-speed broadband connections to all in the county. The proposal highlighted federal dollars from the American Rescue Plan as a funding source with an 18 month timeline. Community members also stressed that high-speed internet should be affordable for low-income families.

Building upon Le Sueur County’s existing network of trails was also another high priority of the community. Proponents called for trails to provide ease of access to the county’s natural resources, including lakes, rivers, campgrounds and parks. Another group pushed for a county-wide trail system that would connect to Sakatah Trail and provide access to the Minnesota River.

“I would like to see them use our natural resources,” said Julie Widmer, a swine farmer from Union Hill. “I mentioned the Ney Nature Center being in our community and with a river running through it, the Minnesota River. My family is very active in canoeing and kayaking down the river and a few weeks ago I saw a multitude of eagles, kingfishers and fish just jumping on the river, so we should take advantage of this wonderful resource.” 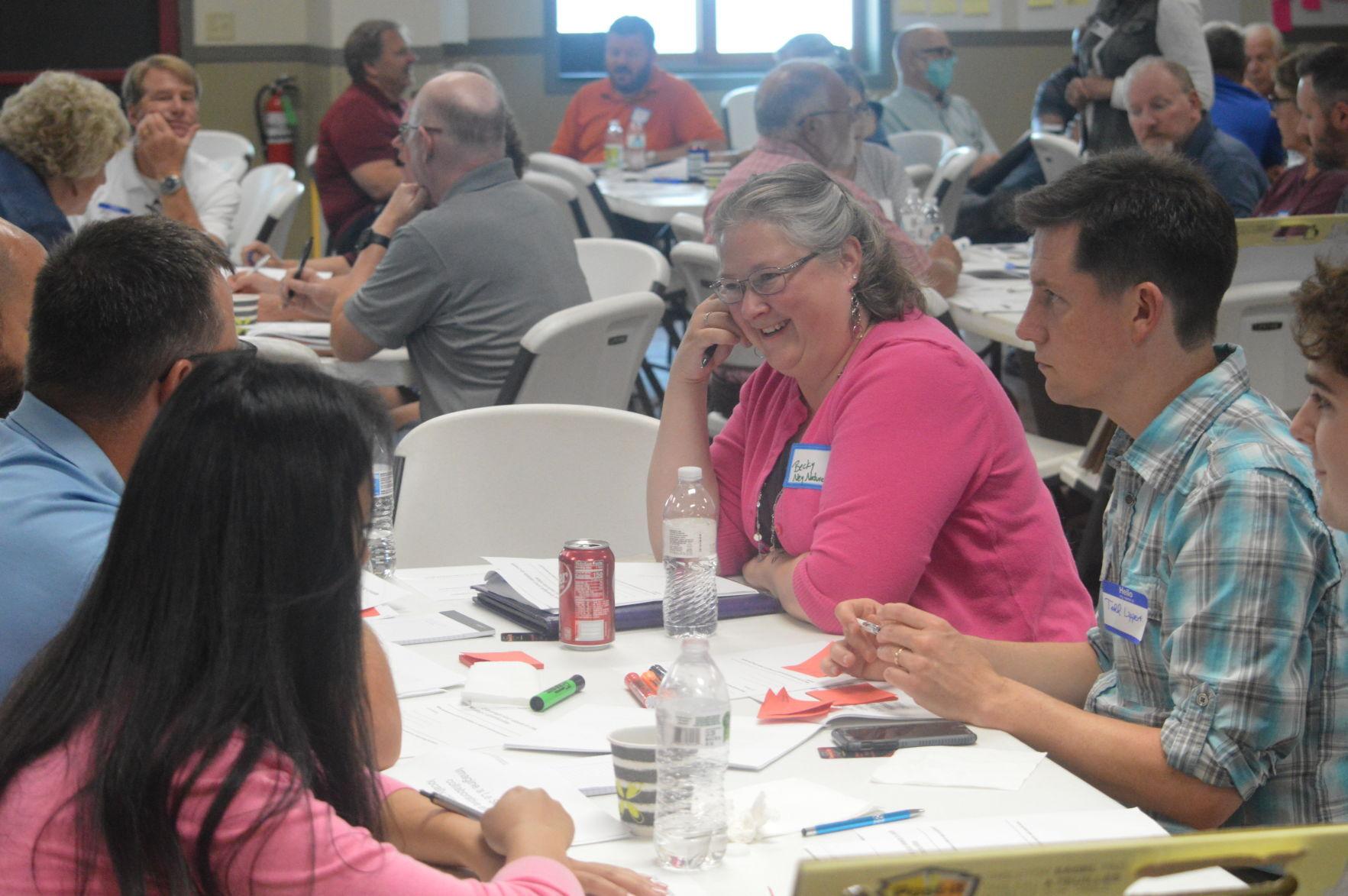 Other proposals formed by the community included a tourism marketing campaign and assessment. The tourism assessment would have the county participate in the University of Minnesota Extension Office’s program to identify opportunities to attract visitors. The proposed marketing campaign would advertise each community’s assets statewide and include a suggested itinerary for day trips.

In addition, some suggested a rotating county-wide farmers market which would come to communities without an established farmers market. Others proposed a countywide vendor fair at the Le Sueur County Fairgrounds, which would highlight small businesses, farmers and crafters. Libraries could also be a way to highlight local businesses and hobbyists, suggested one group. In a proposed How-To Festival, the Montgomery Library would host short 30-60 minute sessions where local experts would provide instruction on various skills like “How to pick the perfect produce” or “How to create a fairy garden.”

One group focused on bringing back youth to the county with a mentor program that would allow students to shadow local business and industry leaders, network and earn scholarships. Another group suggested creating welcoming and housing opportunities for newcomers while another pushed for crisis housing development.

Le Sueur is trying to keep the lights on.

At its July 12 meeting, the Le Sueur City Council approved a plan restructuring the city’s electric billing to fund additional investment in the city’s electric infrastructure. The change comes after the city received the results of an Electric Rate Study by DGR Engineering, which concluded the city would need to raise revenues over the next decade to support capital investment and restore the unrestricted cash reserve balance.

The approved changes seek to better reflect disparities in electrical use and support the costs of maintaining and expanding the grid.

For the average residential user consuming 600 kW a month, the rate restructuring will add a $5.36 per month increase to their electric bill. The average small rural property will pay an additional $7.38 per month, and the average general service commercial property will spend an extra $0.57 per month.

“A lot of this is because of metering upgrades and our utility billing system upgrade,” said Public Services Director Rich Kucera. “With those two components, we’re able now to get this data to move forward with this.”

The city will also restructure rates to reflect seasonal changes in power supply costs. Electric rates will be higher in the summer when demand peaks and lower in the winter when usage falls.

All classes will also see an increase in the flat monthly customer charge to accommodate the fixed costs of providing power. Kucera said this charge would allow the city to generate revenue to support power infrastructure, even if it is rarely used.

“We get some revenue for the infrastructure we put out there, even if it’s one day a year,” said Kucerea,

Electric franchise fees and underground fees will be discontinued and instead rolled into the regular rates to maintain revenue.

Offsetting some of the charges is the elimination of the current Energy Cost Adjustment. However, the city is retaining the right to impose the ECA if necessary.

“If, in the future, something happens that drastically affects us, this would allow us not to have to come up with those funds and pass them along to this customer,” said City Administrator Jasper Kruggel. “We hope that it doesn’t happen, but at the end of the day, it could.”