Tyler Schroer came from a long line of service members when he signed on to serve in the United States Navy, but he never could have expected he would be spending his first deployment with his own father. 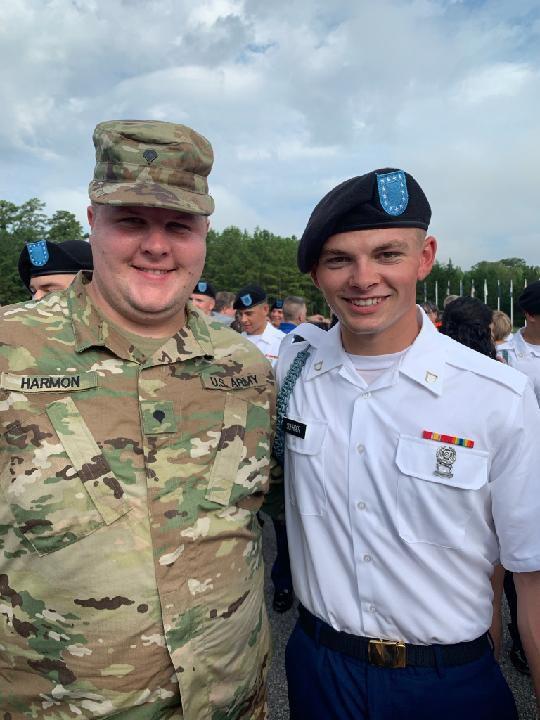 Father and son Andrew Harmon (left) and Tyler Schroer (right) were deployed to the same naval base. The two were given a sendoff by the Le Sueur community with more than 100 people showing at the parade honoring the pair. (Photo courtesy of Jaime Harmon)

It was a surprise for Andrew Harmon, of Le Sueur, too, when he heard the news that he would be joining his son to serve on the same 700-man naval base on the Horn of Africa. He said that It’s not common for family to be deployed together, but it would be a comfort that Schroer was with him.

“It will be unique, that’s for sure,” said Harmon. “It doesn’t happen very often. It will be nice to have each other there.”

“I’m excited to go with him because I think that’s a big thing and I think he’s looking forward to having someone there he can lean on a little bit more accessibly,” he added.

Harmon is a specialist who has spent a little more than 10 years in the military. While the deployment is Harmon’s second, it will be a new experience for Schroer, who joined the military during his junior year of high school.

“We have a family history of military members and whatnot, and I always looked up to my stepdad and other members that have served, and I’ve seen how proud it makes, not just my family, but a lot of people, and I’ve known its always been a good thing to serve,” said Schroer. “It’s not necessarily everyone’s duty, but I’ve always been interested in the military and the lifestyle, so I felt I wanted to take a shot at it and make my family proud.”

The pair are spending a year on the east coast of Africa. The horn’s proximity to Saudi Arabia and Yemen means that they can be called to assist troops in the Middle East if needed.

“Being deployed in general, I’m a little nervous, because this is my first time ever leaving the country for something like this, but it makes me feel more comfortable knowing that he’s going on the same boat, as I am in the same place,” said Schroer. “I kind of feel a little more secure. It’s definitely going to be an experience that I never forget. I get to travel to a new world.”

Before they left for that new world overseas, Harmon and Schroer were given a big community sendoff on Thursday, May 28. A parade was organized for the two by wife and mother Jaimie Harmon. Inspired by the drive-by parades held for birthday parties during the COVID-19 pandemic, she felt that it was the perfect way to give the boys a sendoff.

But what was intended to be a little ceremony with close family and friends blew up beyond the family’s expectations. More than 100 people showed up to support Harmon and Schroer at the parade. 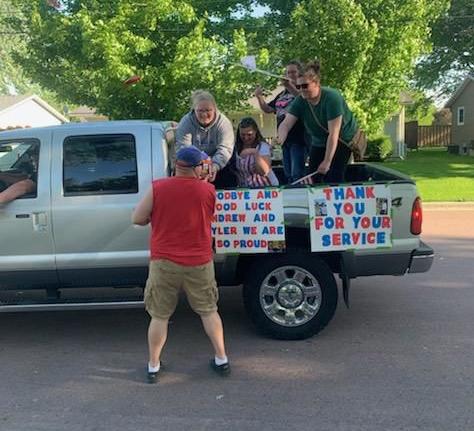 Family and friends joined the Harmon family in a sendoff parade. Vehicles adorned with signs and messages for the servicemen. (Photo submitted by Jaime Harmon)

“It definitely took me by surprise,” said Schroer. “My mom brought it up last week that it would just be close family and friends and a nice way for people to say goodbye and whatnot. And then boom, it got to the point where it felt like the whole state was coming. But it feels really good to know that there are people in the communities willing to show their appreciation. And it really sits well with me that there are people in the community who know what’s going on and can be there for my family that’s still back home while we’re over there.”

Harmon was glad to see that support at well and appreciated that the community would be in support of his family even as he was overseas. It’s an exciting time, but a difficult one as well since Jaimie will be raising the family’s three other children and managing their three American Family Insurance offices.

“Obviously I’m going to miss them a lot,” said Jaimie Harmon. “We have three other children so there’s a lot here at home. Its a bit scary and overwhelming but I’m really glad they are together in this. How cool is that that they get to spend holidays together and all of those important points? So I’m thankful for that.”

As the pair of servicemen depart, Schroer said that he’s excited to get plenty of time to work out, see a new country and live the military lifestyle. He hopes that the experience will help him build character and was appreciative of all who came out to support his family.

“Thank you to everyone for showing their support and stay safe,” said Schroer. “See you all in a year.”

Benny Rutt (left) and Cade Kriha, both of Le Center, enjoy the rides on the final day of the Le Sueur County Fair in 2015. The 2020 fair in Le Sueur County is still tentatively on, in spite of several fairs already being canceled across the state. (County News file photo)

Amid growing public health concerns related to the coronavirus, summer festivities across the state of Minnesota have been canceled, but the Le Sueur County fair is holding on.

More than one in three Minnesota county fairs have already been scrapped, as well as the state’s largest celebration: the Minnesota State Fair. In a wave of new cancellations following the state fair’s closure, the Nicollet County Fair Board announced that their long-time county festival was canceled on May 26.

“Due to the current COVID-19 concerns and stipulations, along with the 2020 Minnesota State Fair cancellation, the 2020 Nicollet County Fair scheduled for August 5-9, 2020 has been postponed until August 2021,” said Nicollet County Fair Board President Windy Block. “This difficult decision was made with the health of participants and guests attending our fair as our greatest concern.”

In previous years, the Nicollet County Fair drew in large crowds with various attractions, including a carnival, demolition derby and tractor pulls. One of the most prominent events at the fair and county fairs across the state have been the 4-H animal showcases. At these showcases, kids and teens would demonstrate their animal husbandry knowledge and skills through showing judges and fairgoers the livestock they raised.

While the news was a disappointment, Nicollet County 4-H Extension Educator Dianna Kennedy spoke in support of the fair board’s decision and announced plans to create an alternative for 4-H youth to showcase their animal projects.

“While there will be no fair, we are committed to offering an alternative for Nicollet County youth to showcase their learning and achievements locally in August,” she continued. “Our 4-H members will continue to work on their projects. In partnership with the fair board, we will find a way to celebrate their effort and ensure a pathway to state showcase events. The details of these showcases, whether they be online or in-person or a combination of both, will be determined over the next few weeks.”

Though the Nicollet County Fair has shut down its plans for the season, in neighboring Le Sueur County, the fair board is continuing its plans to hold the fair. The board announced that the festival would be on for the time being and the board won’t need to make a final decision until next month.

“We don’t have to make our decision until the first week of July to make sure that everything can still happen,” said Le Sueur County Fair President Chad Waska. “We’re just seeing if the governor will open up large gatherings, and as of right now, 4-H is closed through June, and [we’re] waiting to see if we can have animals at our fair or not. If there’s no 4-H, and we can’t have large gatherings, then there’s no fair, but we’re still hopeful that the governor will open things up.”

If restrictions are loosened, Waska said the fair would proceed so long as the safety standards could be met. If the fair could not be held, the fair board may explore other alternatives. Waska said there had been discussion of a virtual event in case of a cancellation, but those types of discussions were still preliminary.

“We’re not canceling quite yet, but we’re going forward optimistically,” said Waska. 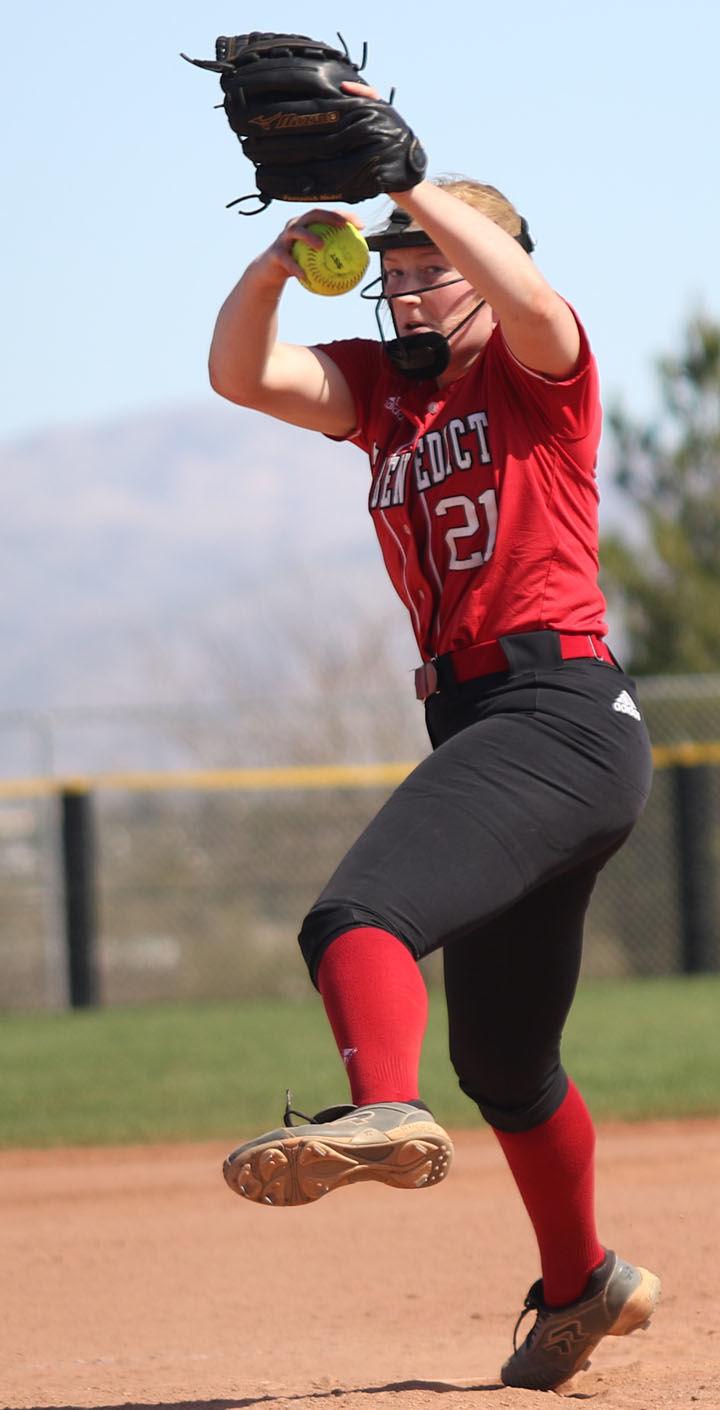 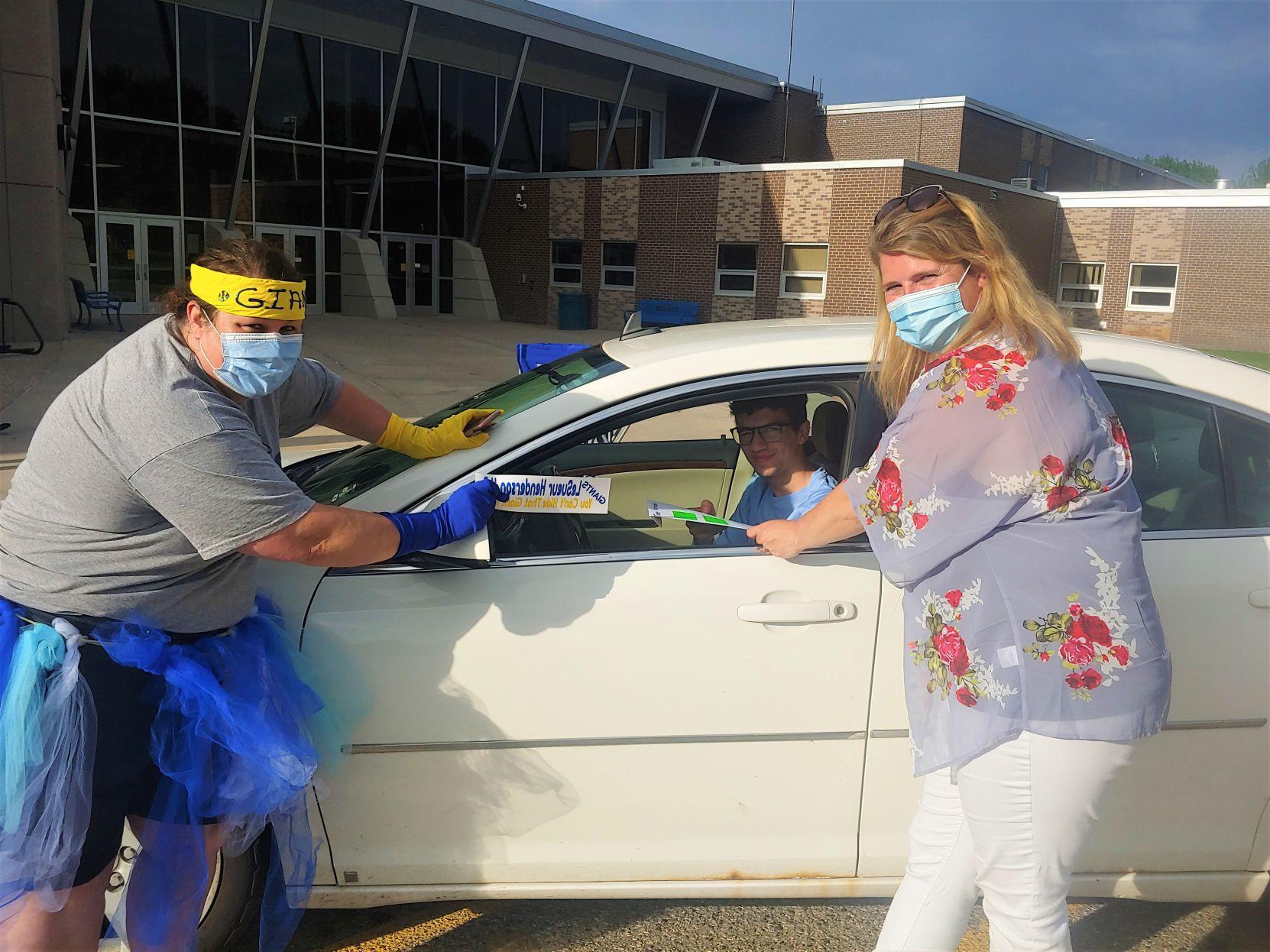 Every year, select students from Le Sueur-Henderson’s graduating class are recognized and awarded with funds to help further their education through the Dollars for Scholars program.

This year was a bit different. Under COVID-19 restrictions, the Le Sueur-Henderson Dollars for Scholars chapter scrapped their annual ceremony in favor of a curbside pickup.

On Wednesday, May 27 students and parents drove up to Le Sueur-Henderson High School to be greeted by faculty and members of the Dollars for Scholars Committee. Adorned in face masks and gloves, the distributors gave each student an envelope with their scholarship and a bumper sticker recognizing them as a recipient of the award.

While the ceremony was impacted by COVID-19, the generosity of donors was not. More than $49,000 was raised by Dollars for Scholars for 27 Le Sueur-Henderson students matching 2019’s total of $49,325, which was awarded to 35 students that year. Factoring in scholarships given out by the district and this year’s class received a total of $96,000 in funding.

Jean Schwarz, the Awards Director for Le Sueur-Henderson Dollars for Scholars, said that one of the main reasons that the program was hosting a curbside pickup was so that all the money raised would find its way to students.

“We wanted to save money on postage and really we wanted as much of this money to get into students hands as possible, because that’s what it’s all about,” said Schwarz.

While a ceremony couldn’t be hosted for the award-winners, the Le Sueur-Henderson did the next best thing with a virtual honoring. Over the May 15 weekend, Le Sueur-Henderson uploaded a slideshow of all the students that received scholarships this year, recognizing their achievements.

“It’s different from our usual two-hour ceremony,” said Dollars for Scholars member Barbie Schwartz, “But we’re glad to be doing what we can.”

Matthew Skelly — $300 — The Ripple Effect by the Hammes Team