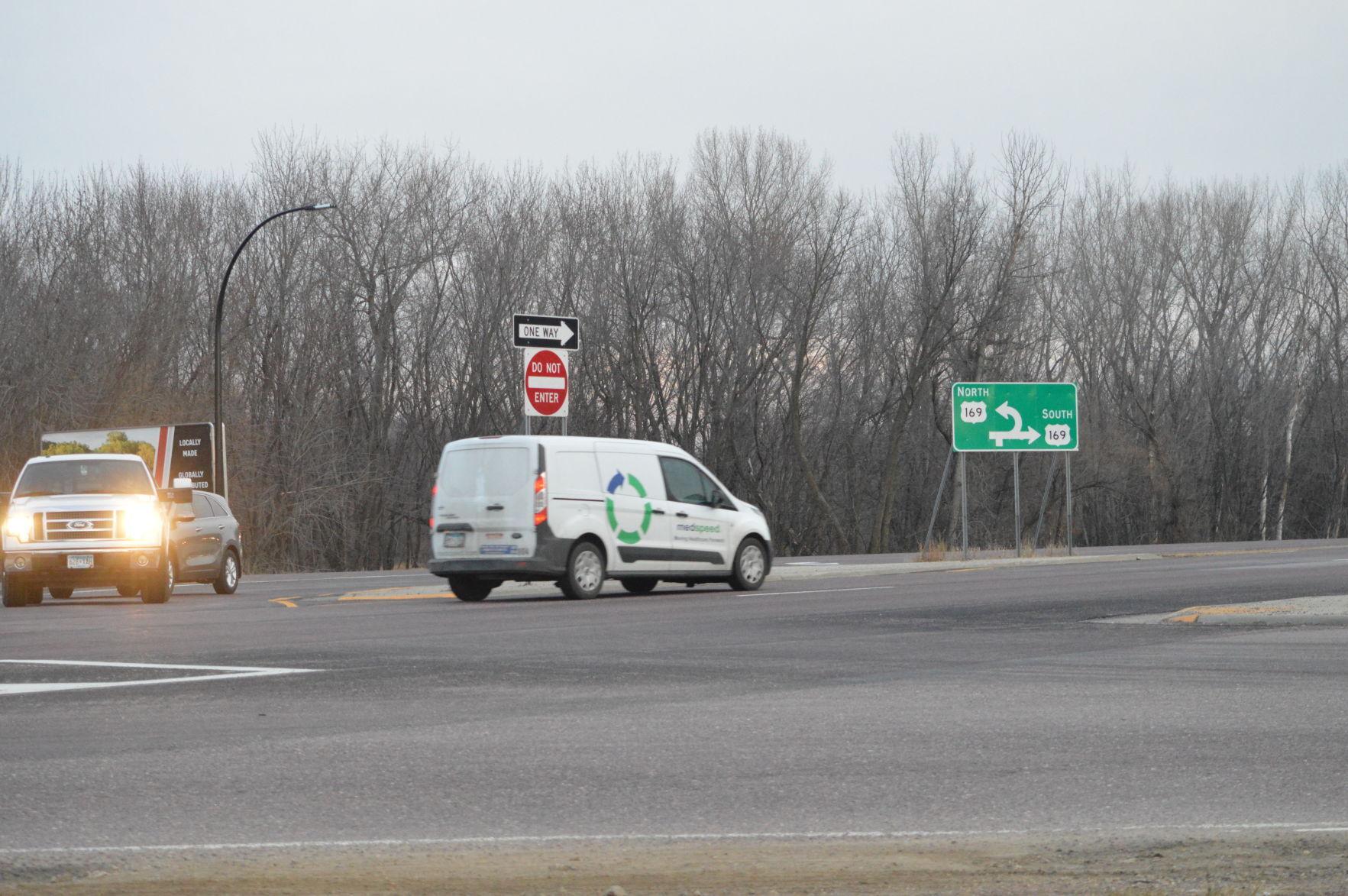 Vehicles make a U-Turn on an RCUT intersection on Hwy. 169 in St. Peter. The unconventional intersection has been shown to reduce opportunities for collision, but are uncommon in the state of Minnesota. (Carson Hughes/southernminn.com) 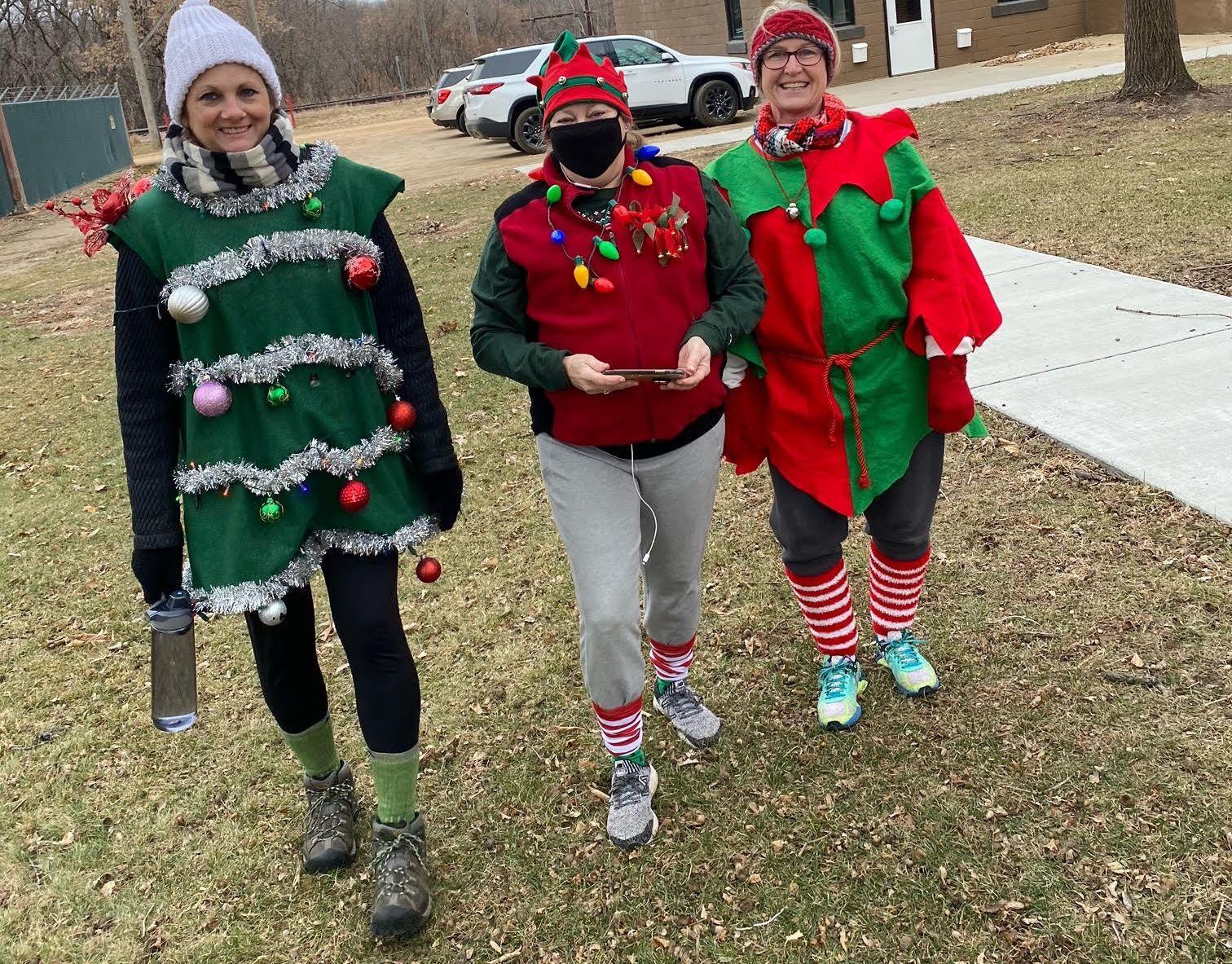 Participants in the Your Time Fitness Jingle Walk for the Arthritis Foundation were encouraged to wear their craziest holiday costumes. (Photo courtesy of Kris Krause)

The personal trainers at Your Time Fitness ushered in the season of giving the only way they know how — with exercise.

The Arthritis Foundation is dedicated to providing information and resources for the leading cause of disability in the United States. More than 54 million adults and 300,000 children in the U.S. have arthritis, which causes severe joint pain and can limit the type of work and activity a person can too.

“The Arthritis Foundation was there for me when I was diagnosed,” said Krause.“They helped me find the right doctor and the right treatment path for me. So I’m just giving back to them.”

Over the past five years, Your Time Fitness has raised thousands of dollars for the Arthritis Foundation. With multiple fundraising efforts throughout the year, Your Time Fitness has become the second-highest fundraising team in the state of Minnesota, said Krause. The local business regularly participates in a 5k at the Minnesota State Fair, but the COVID-19 pandemic cut those plans short in 2020.

Staff, family and friends of Your Time Fitness in Le Sueur gathered for a Jingle Run to raise money for the Arthritis Foundation. (Photo courtesy of Kris Krause)

“Every event that we had planned for the year ended up being canceled,” said Krause. “We always do an aerial performance fundraiser student showcase in the spring, and that got canceled. We’ve done boot camps, bake sales, we did a painting class last year. It’s been very interesting and challenging raising funds for the race this year.”

Your Time Fitness was finally able to get outdoors and raise dollars for the Arthritis Foundation with the Jingle Run along with runners all across the country. Those who couldn’t attend in person could also participate virtually. By entering their information on the RunGo app, runners who wanted to keep up their social distance in the holiday season could log their individual 5k.

The fitness studio kept the Christmas spirit up with a holiday dress code. Runners dressed up as snowmen, christmas trees, elves and threw on Santa hats to spread the spirit of giving.

“We encouraged everyone coming to the walk to dress up in festive wear, whether that be a santa hat or a full costume,” said Krause. 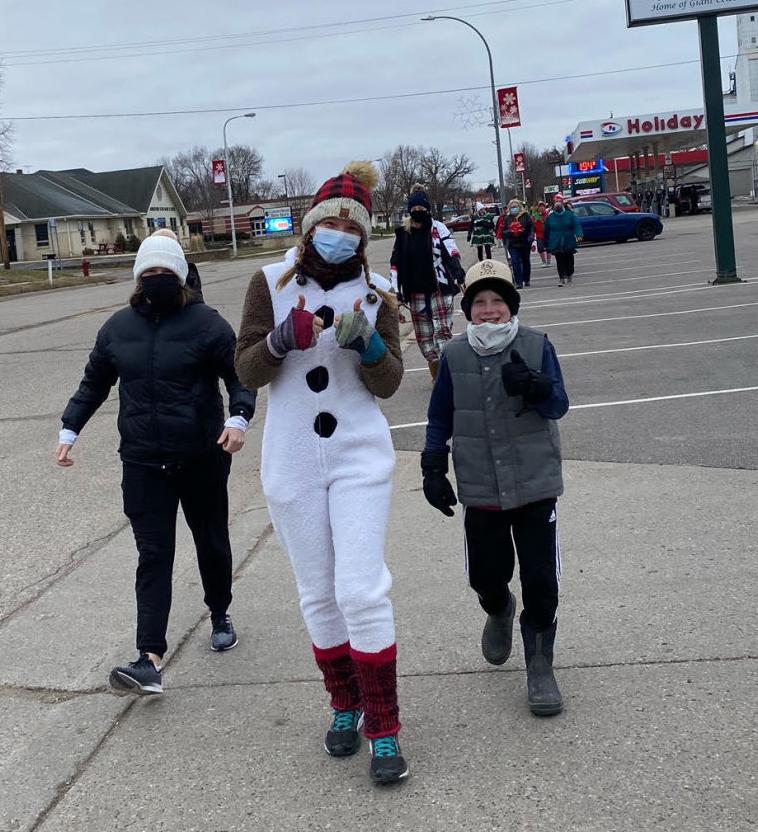 The Arthritis Foundation is attempting to break the world record for the largest remote 5k in 24 hours. Your Time Fitness was one of many organizations across the country to try and help the non-profit to set the record. (Photo courtesy of Kris Krause)

Despite the challenges presented by the pandemic, Your Time Fitness met their yearly fundraising goal before they even started the run. On Friday morning, the studio raised $2,000 for the Arthritis Foundation, but they’re still hoping to raise $1,000 from the run itself.

“I hope this will bring awareness to those with arthritis,” said Krause.

Your Time Fitness is still raising money for the Arthritis Foundation. To donate to the Jingle Run Fundraiser, go to https://events.arthritis.org/index.cfm?fuseaction=donorDrive.participant&participantID=213124 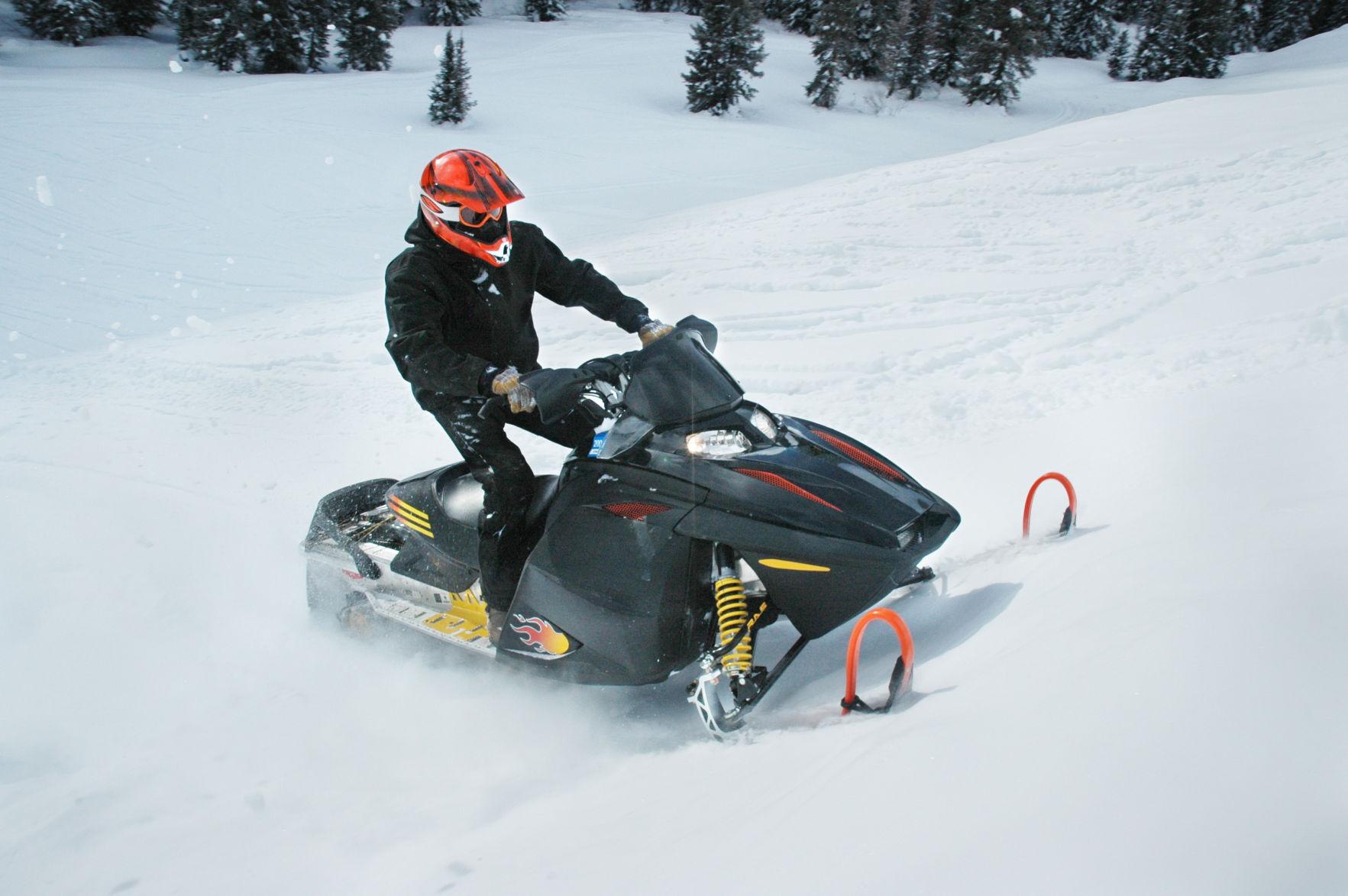 A proposed ordinance will expand the use of snowmobiles and ATVs in the city of Le Center. (Metro Creative image)

A proposed ordinance may loosen regulations on snowmobiles and ATV use in the city of Le Center.

At the Dec. 8 City Council meeting, Le Center City Attorney Jason Moran proposed a new snowmobile and ATV ordinance to update the city code to reflect changing state regulations on the vehicles. The proposal was crafted by Moran with input from Police Chief Robert Pfarr.

“We did a blend of state law with what we currently had,” said Attorney Jason Moran. “You have a decent ordinance in place. There have been some changes, because we have some new technology on the roads.”

Under the current ordinance, snowmobiles and ATVs can only travel at speeds of up to 15 miles per hour on the extreme right side of the roadway on city streets. Travel within the business district and on county roads and state highways is not allowed, with limited exceptions in case of emergency, returning home or making a direct crossing.

On county highways, snowmobiles and ATVs would be allowed to drive within the ditch or right shoulder or the extreme right hand side of the road.

Left turns would be allowed from any part of the road if it is safe to do so. Left turns may also be allowed on the state highway, but only to gain access to a business.

“Under the old ordinance they would not have been able to drive on the trunk highway on the county highway,” said Moran. “The state law has been amended so this has followed state law to allow snowmobiles and ATVs on the extreme outer ditch.”

Snowmobiles and ATVS would still be allowed on city streets except in the business district which includes Park Avenue, Derrynane Street/Hwy. 99 to Tyrone Street and Minnesota Street between Cordova and Maple Ave.

Snowmobiles and ATVs would remains subject to a curfew between 11 p.m. and 7 a.m. Violations of the new ordinance would constitute a misdemeanor with a penalty fine of up to $1,000, imprisonment for up to 90 days or both.

The proposed ordinance will be subject to a public hearing before the January City Council meeting at 6:30 p.m. Jan. 12 at Le Center City Hall.

A panel of Mayo Clinic Health System experts hosted a virtual COVID-19 community forum on Monday to share community updates on vaccines and the health system’s local response to the pandemic.

“We are really excited now to begin to see some glimmers of hope that will allow us to begin to move towards more life as normal, I believe coming up in the very near future,” said Robert Albright Jr., the regional vice president of the Mayo Clinic’s southeast Minnesota region.

The COVID-19 rates continue to remain high across the state, although the numbers seem to be plateauing for the last several days, said Deepi Goyal, a physician and regional chair of practice for the region. He added that the full effect of Thanksgiving in the region won’t be seen in the case numbers until two to three weeks from now. Test positivity rate remains at 20%, which is high and ideally should be around 5%. Hospitalizations have remained stable in the region, Goyal said.

“We really have been prioritizing our hospital staffing and shifting our nurses and other staff to make sure that our more acutely ill patients have the staff and the providers to care for them when they need that care,” Goyal said, adding that they are maximizing their capacity.

He added that they have redeployed a lot of the regional staff to help support the other functions the system is doing. Elective surgeries in Red Wing and Austin have been paused so that they could supplement hospital staff. Goyal praised the system’s drive-thru testing sites that were developed early on in the pandemic, which have since moved indoors with appointment set ups.

He also praised the team’s ability to monitor the tests and communicate with the people who tested positive right away.

Goyal also discussed some of the new work that is being done around treatment for COVID-19. In Austin and Red Wing, treatments are helping patients return home from the hospital more quickly. Additionally Goyal discussed using monoclonal antibodies, which are laboratory proteins that mimic the immune system’s ability to fight viruses. This treatment can be given to people who have not yet been exposed to COVID-19, which can decrease the severity of the illness. He said it is also effective to help early on in the disease as well. The supply of the monoclonal antibody is allocated by the state and Goyal said their goal is to use every dose that they receive, especially for patients who could use it the most.

Robert Jacobson, the medical director for the Population Health Science program at Mayo Clinic, took the time to talk to the community about the vaccine and bust some myths. Hesitancy is not something new when it comes to vaccines, Jacobson said.

About one-third of people are hesitant about taking a vaccine, but the vast majority of them end up taking the vaccine after their questions are answered and they are provided with more information.

“A lot of patients are saying these (vaccines) happened so quickly. Did you skip over any of the steps? Are you sure that we’re going to be having vaccines that are effective, safe, needed and beat the alternative of masking and social distancing?” Jacobson said.

He assured the community that the process of developing and testing these vaccines were completed just like any other. He said the vaccines are safe and effective and will be available in a matter of weeks.

“While the vaccines are new, the disease is new, the process by which we will be approving and recommending these to use in you is the same that we have been using beforehand with the other vaccines,” Jacobson said.

He went on to dismiss common myths surrounding the vaccine and discussed the fact there are no known major side effects. That being said, the reactions that they are seeing are the reactions you might get occasionally with a vaccine, such as redness and swelling near the injection site and some systemic reactions, such as fatigue, muscle soreness and body aches. These are reactions that Mayo has accepted with the vaccine and Jacobson said that none of those symptoms turned into chronic conditions.

Vaccines will first be distributed in a strategic and careful fashion, said Melanie Swift, an occupational medicine physician and internist at the Mayo Clinic. Unlike standard vaccinations, such as for chicken pox or tetanus, this vaccine won’t be available at the primary care office in a first-come, first-serve basis.

The vaccine will first be distributed to health care workers. They were chosen because they are on the front lines of the pandemic and they have a higher rate of vaccine uptake which means they could set a good example for others to also take the vaccine, Swift said. There are 21 million health care personnel in the United States, including doctors, nurses, and the people who clean the rooms and deliver the food, Swift said.

Another group of people expecting to receive the vaccine in the first round of distribution include people who live in long-term care facilities. Residents of long-term care facilities account for just 6% of COVID-19 cases, but make up 40% of the deaths, Swift said. The intent is to get everyone vaccinated at some point in the coming phases, with an emphasis on people who are at high risk with other health conditions and people who work in essential roles.

Albright said there aren’t any plans to shut down their clinics in southeastern Minnesota to meet nursing needs of hospitals. They are trying to allocate their resources as best they can. However, they are slowing down elective surgeries, especially surgeries that require an overnight stay in a bed. He said they have also limited other surgeries that don’t require an overnight stay.

“We are still trying everything we can to keep the community’s needs met,” Albright said.

Additionally there is a push to reach out to patients virtually via phone and video visits at home. This will be focus as they continue to navigate the COVID-19 crisis.

The health system plans to host more community forums in the future. 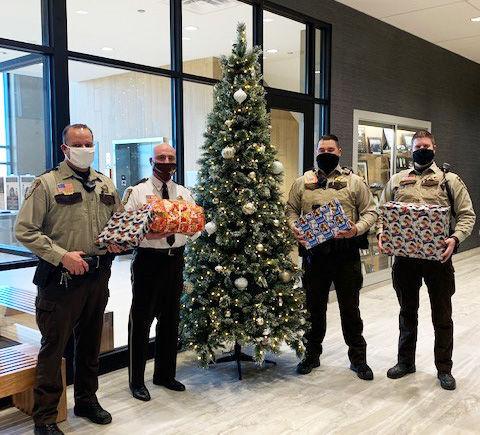