Whether you’ve lived in Kenyon all your life or just moved to town, the Kenyon Area Historical Society’s cemetery walk event is the place to be to learn more about those who were influential in shaping the city. 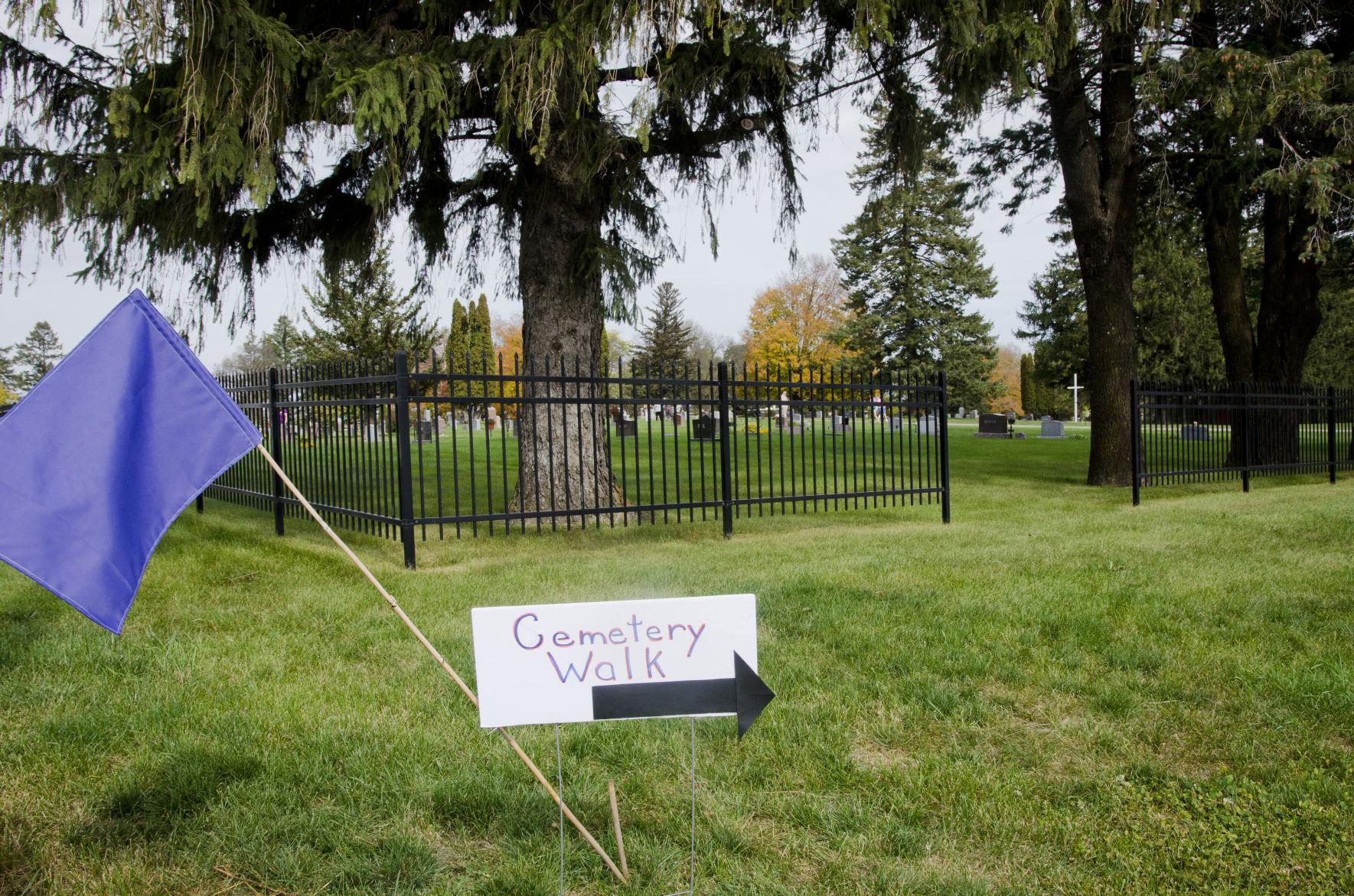 The KAHS Cemetery Walk began last year as a way to offer a bit of history in a safe fashion amid the pandemic. The outdoor event allows for ample social distancing and brings attendees to the Kenyon Cemetery.

On Saturday, groups of local residents found their way around the cemetery to learn more about people who lived in the Kenyon area. Flags marked the gravesites of the highlighted individuals, and friends or family members with close connections shared their stories. 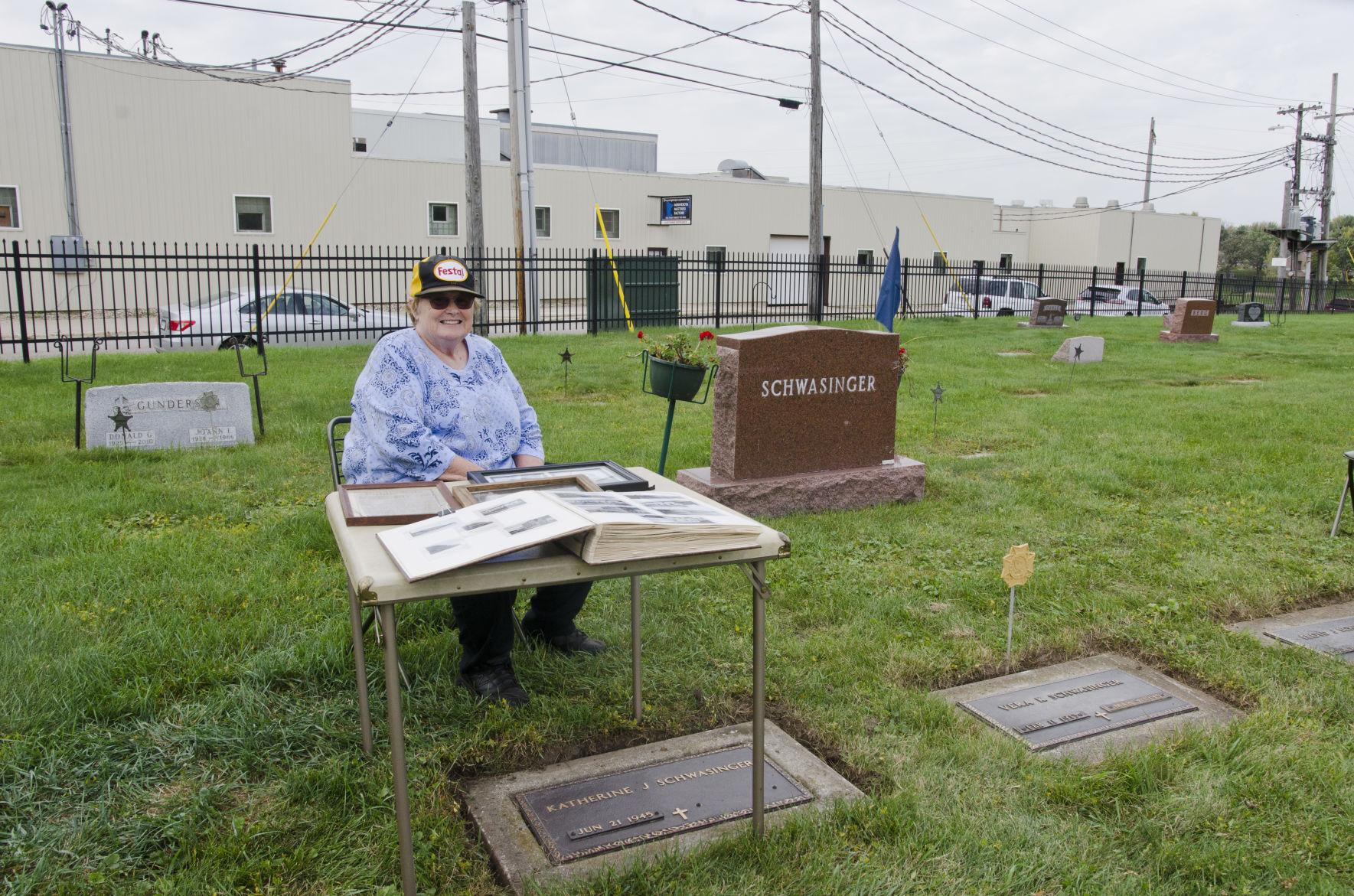 Katherine Schwasinger talks to Cemetery Walk attendees about her parents, Floyd and Vera. Pictured in the background is present day Mattress Factory, where the former Goodhue County Canning facility once operated. (Michelle Vlasak/southernminn.com)

KAHS member Kevin Anderson came up with the idea last year as society members brainstormed about what they could do during the pandemic that’s not only safe, but also promotes local history. KAHS member Dan Rechtzigel said Anderson would dig up the history about some individuals in Kenyon, and bring the list of names to a KAHS meeting. From there, members pared down the list and put together a group of residents covering areas including business and education, or those who had interesting stories or hobbies.

“It’s just a colorful group of former Kenyon residents,” said Rechtzigel of those who have been highlighted. 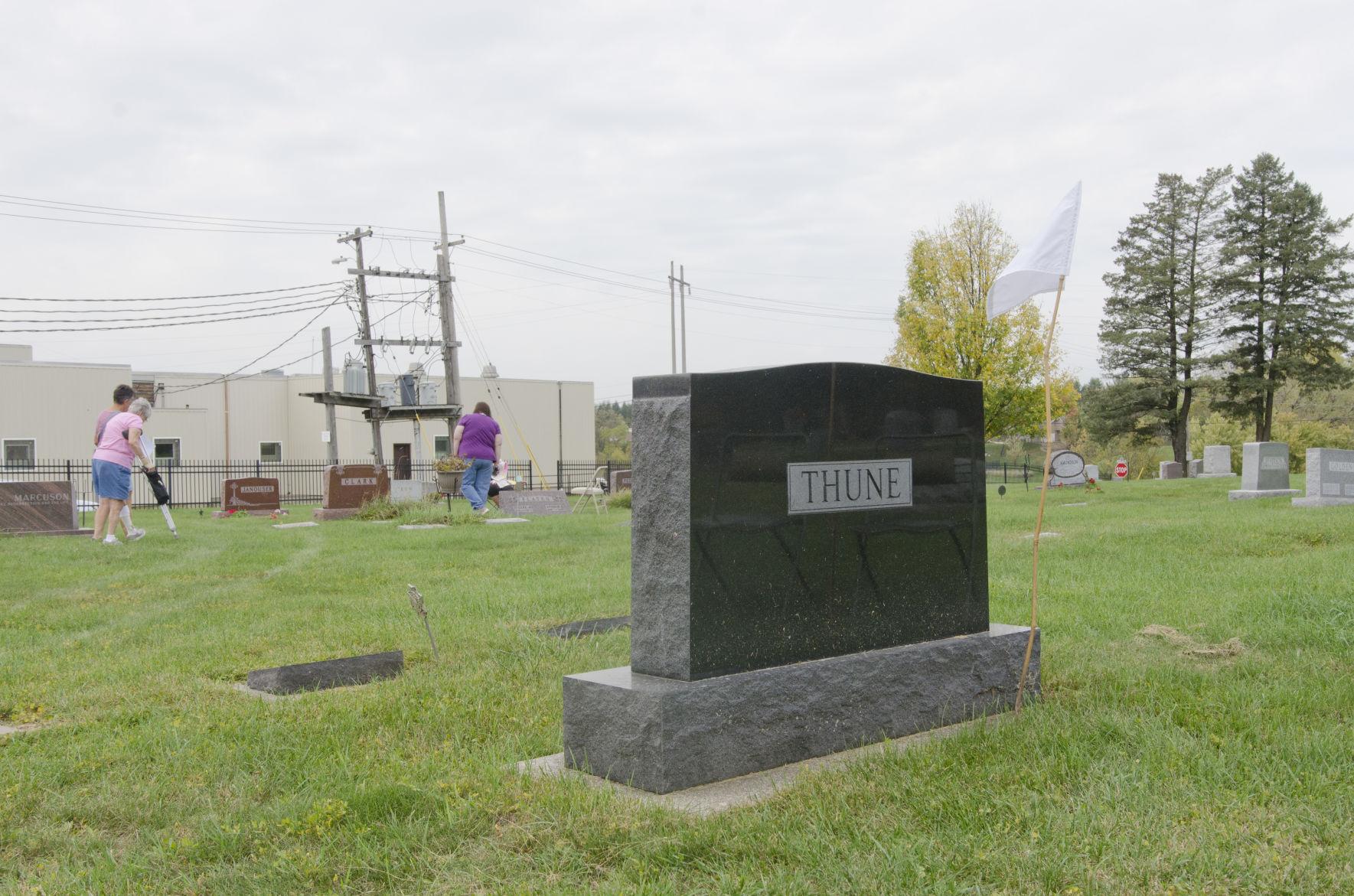 Enoch Thune was one of eight residents highlighted on Saturday. Thune owned the Lyric Theater at the age of 20. (Michelle Vlasak/southernminn.com)

When reaching out to family members of the one-time Kenyonites, Rechtzigel said they found many willing to talk. In some cases, close friends or people that had a close connection with that particular person were happy to step up. Just after the start of Saturday’s event, Rechtzigel noted some surprising positives that came out of last year’s event. He enjoyed the fact that it was not only a time for people to share history, but also for guests to share their stories they had of that particular person.

“It worked so well last year, and people had so much fun with it, we thought ‘Yeah, let’s do it again this year,’” said Rechtzigel. 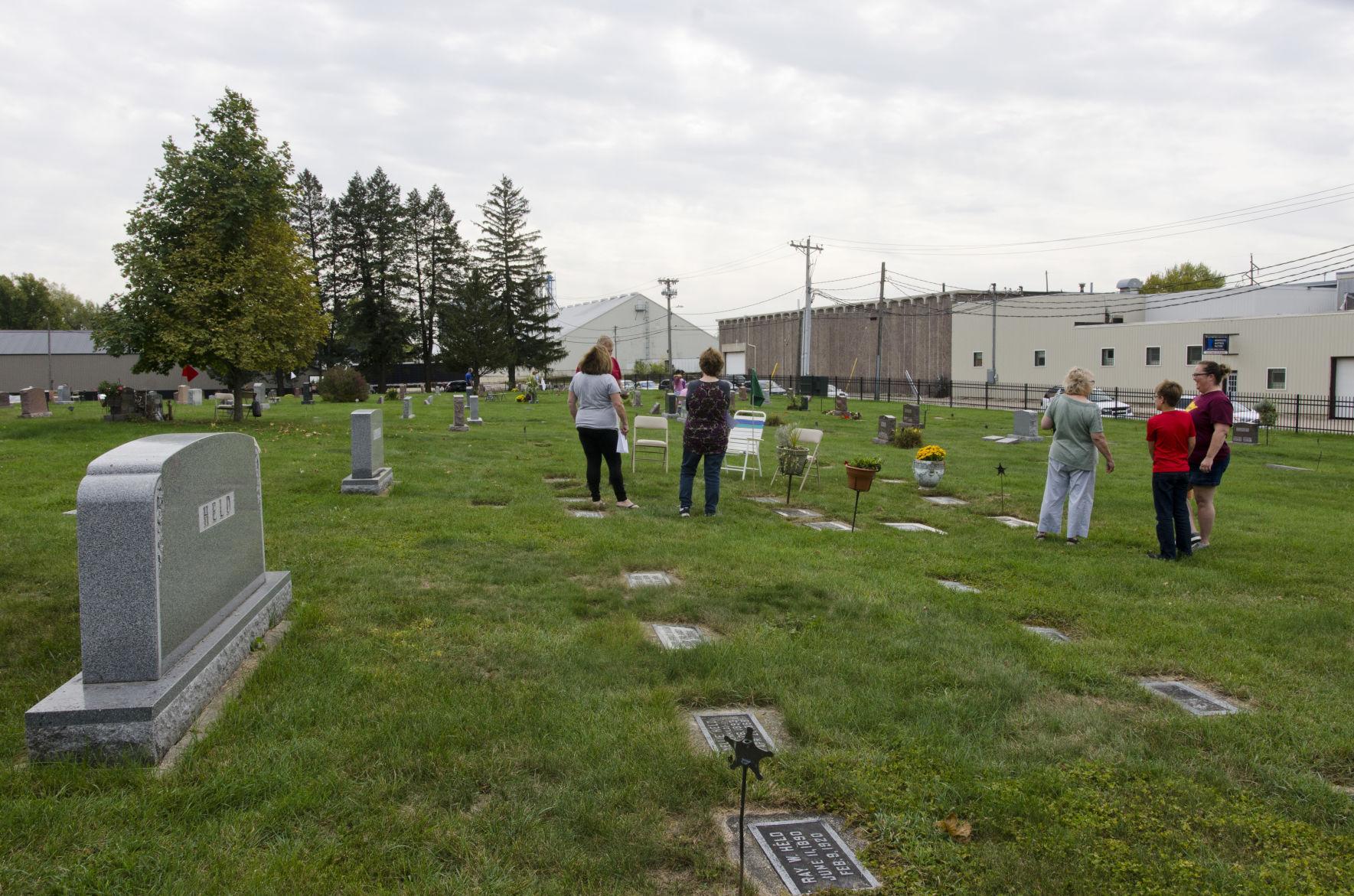 Rechtzigel also views the event as a way to honor individuals and learn more about those that are buried in the local cemetery.

A total of eight different community members were highlighted. Some might be familiar, others are not as well known. 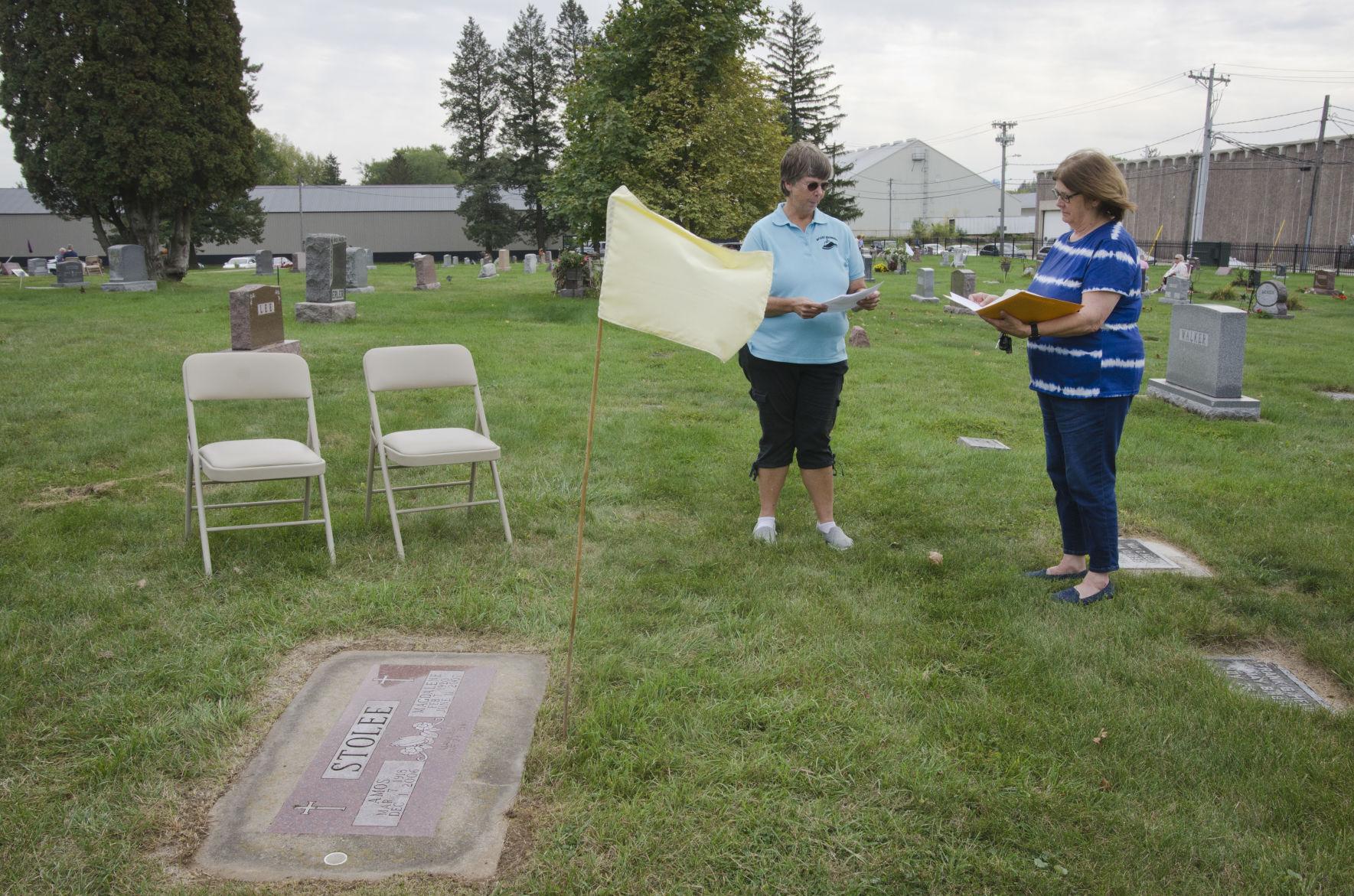 Miriam Stolee tells the story of her mother, Magdalene Stolee, who came to Kenyon in the 1940s as a school teacher and served on the Kenyon School Board for many years. (Michelle Vlasak/southernminn.com)

Per the flyer given to attendees of Saturday’s event, the following people will be highlighted

1. Floyd and Vera Schwasinger are a couple whose story will be told. Floyd came to Kenyon as superintendent of the Goodhue County Canning facility. Vera is fondly talked about as having a café where young people would gather. Presented by their daughter, Katherine Schwasinger.

2. Peter Dyrdahl started working at Reko’s grocery before being part of the partnership of Kramer and Dyrdahl Self-Service Grocery. Presented by grandson Dave Broin.

3. Enoch Thune owned the Lyric Theater at age 20, was an inventor and interior decorator. Presented by Kevin Anderson. 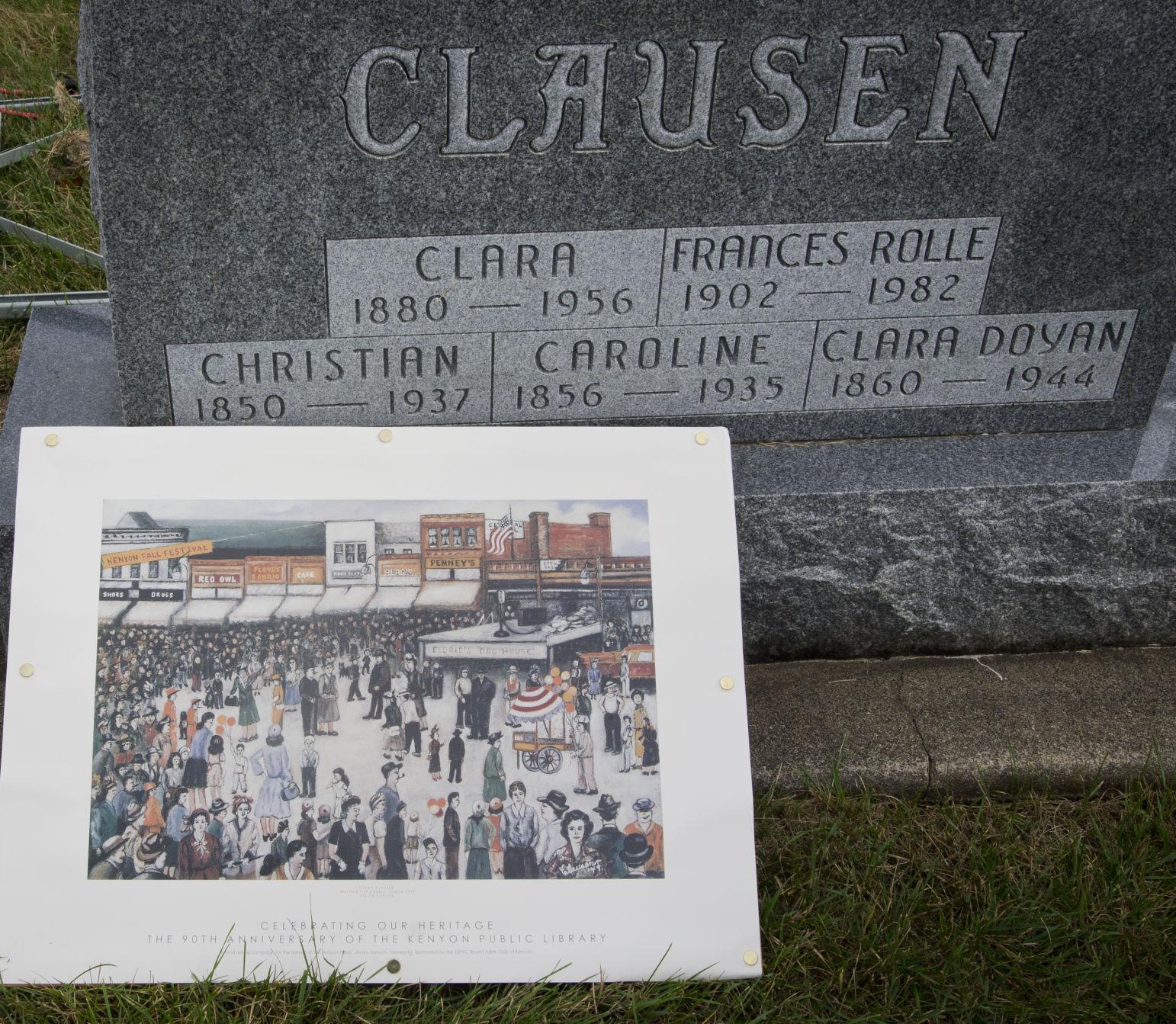 5. Until the company upgraded to dial-up service, Tillie Clark, who died five months short of her 100th birthday, was the longtime telephone exchange operator. Presented by niece Mary Danielson-Gates.

6. Vernon Reko grew up on Main Street above the family grocery store. He spent the majority of his working career as the manager and doing shoe repair at Picha’s shoe store. Presented by Mary Gail Flom Anderson.

7. Jay Held, a Kenyon High School’s first football team member, was a Kenyon businessman, serving many years on the Kenyon School Board and the Kenyon Village Council. Presented by Dave Hellstern.

8. Magdalene Stolee came to Kenyon in the 1940s as a high school teacher and served many years on the Kenyon School Board. Presented by her daughter Miriam Stolee.

Stores about the following people were presented at the cemetery walk last year:

Though only a month into the school year, the Kenyon-Wanamingo School Board is beginning discussions for one important end of the year event: Prom.

The board discussed transportation for prom at its Monday evening work session. Historically, the district covers the cost of travel from the school building to the venue where the dinner and dance are, both which are usually held out of town.

Last year, students drove themselves due to COVID restrictions for bus riders. Superintendent Bryan Boysen said there were some liability and safety issues with that option, and that the number one priority is safety.

High School Principal Matt Ryan said he’s spoken to students and parents about transportation during and after prom, and wanted to get input from the board before locking in the evening’s transportation plan.

Board member Debb Paquin said that when the district started transporting students in 2010, the After Prom committee paid for transportation. Jeff Evert, superintendent at the time, said it should be the responsibility of the district, and recommended splitting costs. The district would cover the costs of transportation to ride the school bus, and the After Prom committee would pay for upgrading to a coach bus, about a 50/50 trade.

But with the cost of fuel and other items set to increase between now and May, school officials are planning ahead.

Board member Tonya Craig said from an insurance mindset, students are safe at grand march, then enter into a gray area while in vehicles traveling out of town. During that time, Craig says those students are still the district’s responsibility and plans don’t always work out the way they were intended to. With this last year’s prom, Craig recalled students showing up to After Prom well after others, leaving staff and parent volunteers concerned. If the district’s unable to offer transportation, Craig was in favor of reformatting the prom.

Board member Jamie Sommer said for her prom, students went to supper on their own in whatever transportation they wanted and then went to the grand march at 6 p.m. Following that, buses transported them to Hastings for After Prom.

“I’d like to see some sort of transportation,” said Craig. “They are our responsibility in that time, we need to protect them and keep providing that. It is a fun part of the night, too.”

Though unable to vote since it was a work session, the board favored splitting the cost of transportation 50/50 up to a $3,000 cap. In the past, prom transportation has run about $4,500. Boysen said the district will look at transportation for prom, and hash out the details to bring the item back to a regular meeting for a vote.

Paquin said it’s imperative the board is very cautious looking at costs for transportation, after hearing residents’ concerns with extracurriculars and sports during the operating levy referendum held in Wanamingo Thursday.

Per a federal mandate issued by President Joe Biden, passengers and drivers are required to wear a mask on school buses, for both public and private school systems. School bus operators are finding challenges with enforcing the mask mandate when the school districts don’t have the same policy, as they are easily forgotten about. (File photo/southernminn.com)

Though officials in the state of Minnesota let school districts decide whether or not mask wearing is required inside the schools, public transportation companies don’t have that flexibility.

Many school bus operators are coming across challenges with enforcing mask wearing on buses when students aren’t required to wear them inside the school. Held Bus Service, Kenyon-Wanamingo’s school bus contractor is one of those operators.

While mask wearing at Kenyon-Wanamingo Schools is only recommended, not required, Lorin Pohlman of Held Bus Service, says the U.S. Department of Education’s COVID-19 handbook states the Centers for Disease Control and Prevention issued an order requiring wearing masks on all public conveyances, including on school buses.

The excerpt also states that “regardless of the mask policy at school, passengers and drivers must wear a mask on school buses, including on buses operated by public and private school systems, regardless of vaccination status, subject to the exclusions and exemptions in CDC’s order.”

Pohlman looks to build awareness to parents and members of the community with the federal mandate has been in effect since 2020, and applies to everyone across the nation. A letter drafted from the Minnesota School Bus Operators Association says local contractors, school districts, cities, and even the state, have no say in the matter.

Bus drivers across the state have been finding many children aren’t wearing masks on the bus, and oftentimes do not even have a mask with them when they board, according to the MSBOA. While providing masks to students adds costs for bus companies, as they are spending their own money to purchase masks with no help from school districts of the state, MSBOA states bus drivers are also put in a legal predicament. If they do not enforce the mask policy, they could potentially be held legally liable.

MSBOA also states the Department of Homeland Security recently announced that “any passenger—including passengers on a school bus—who does not comply with the mask requirement on public transportation may be fined $500-$1,000 for their first offense and up to $3,000 for their second offense.”

MSBOA Executive Director Shelly Jonas said of the 130 companies that the association represents, only a handful have mask mandates in the school.

“We are trying to get the message out that they still need masks on the bus,” said Jonas. “A lot of our members have already gone through thousands trying to provide them for the kids every day.”

As districts all choose their own path for determining mask mandates, Jonas says it becomes a divisive issue as they are told by state patrol to enforce masks on the bus.

Above all, the MSBOA looks for parents to help ease the stress and burden on bus drivers by making sure their children have a mask, and wear it whenever they ride the bus, as they continue to do their best to adhere to the law and work hard to make sure their children get to and from school safely.

Pohlman has found there has been a lot of confusion on this mandate, making it difficult for school bus drivers to properly do their job, while also being the ‘mask police.’

“It’s getting to be a struggle for drivers to monitor it,” said Pohlman. “My job is to drive, not be the mask police.”

Going through every bus route, Pohlman estimates they go through anywhere from 5 to 10 masks per bus, something he doesn’t find acceptable.

“Parents need to have the kids prepared when they get on the bus,” said Pohlman. “Our district is one of many that masks are recommended not required, I’m just looking to build awareness.”