Faribault Foods has struggled with a noxious odor since moving into its $140 million facility at 3200 Industrial Drive in 2017. Company officials hope that could be about to change with the installation of a new biodigester system. (Daily News file photo)

The air in one north Faribault neighborhood might be about to get a lot less smelly, assuming that novel plans laid out by Faribault Foods Wednesday come to pass.

As required under state law, the City Council’s meeting was postponed to accommodate the presidential nominating primary. When Councilors did meet Wednesday, Faribault Foods’s plans for an expendable biodigester system headlined a packed agenda.

Faribault Foods has long been a pillar of the local economy. Despite fears that the company might pack up and leave after being sold to Mexican canned foods company La Costeña in 2014, its presence in Faribault has only grown since. In 2017, the company moved into a $140 million, 1-million-square foot facility on Industrial Drive. Company officials promised that the facility, which uses far less water than its former plant, would cut down on unpleasant smells.

That hasn’t happened. Instead complaints quickly began to filter in about odors emitted through the new facility’s sewer vents. The odor is tied to the production of hydrogen sulfide gas from bacteria in the sewer system.

According to Public Works Director Travis Block, about 10 homes in the neighborhood are directly impacted by the operation’s wastewater. That’s because their wastewater travels through the same sewer line as Faribault Foods.

Often times, the odor has a much greater reach than that. When the weather is humid, giving the noxious gas moisture to stick to, residents across the north end of the city complain that they just can’t escape it. Given the difficulty of quantifying a smell, there aren’t any city ordinances specific enough to force Faribault Foods to take odor mitigation steps. Still, the company has worked hard to try to find a solution, exploring one option after another.

No single solution has proved a success, although some of them did cut back on the stench. The latest approach would be the most intensive yet, but it’s one with a proven track record of success, according to the presentation made by Dave Tieman, Faribault Foods vice president of manufacturing.

The high-technology biodigester system is currently used with success by some breweries, according to Tieman. It would remove odor-causing solids from wastewater, purifying it before it’s shipped to the water treatment plant.

In addition to reducing the odor, the new system will produce biogas, which could be transformed into electricity or heat for the facility. That nifty feature won it praise from Councilor Elizabeth Cap, Mayor Kevin Voracek and others.

“If you can use it to power your building, that’s a great thing,” Voracek told Tieman. “It’s a great way for you to use more of what you’re producing.”

The system will include two biodigester tanks along with an equalization tank. It’s designed to accommodate an additional two biodigester units, should the company see its needs expand at some point.

The company is already working through the design engineering process and hopes to secure the necessary permits this spring. Construction could start as soon as May, which would enable it to be completed and up and running before next winter.

Friends of the Buckham Memorial Library hope to see the front of the historic structure become a pleasant outdoor community gathering space. They hired Minneapolis-based architecture firm Perkins & Will to come up with a design and are now seeking feedback. (Daily News File Photo)

On Wednesday, Faribault’s City Council reviewed plans from the Friends of Buckham Memorial Library that could soon see the historic building surrounded by extra gathering spaces and parking.

Making the library an appealing and accessible gathering space has been a goal of city planners. Under the city’s recently approved Downtown Master Plan, downtown gathering spaces are envisioned to accommodate an increased number of downtown residents.

Few places would be a better fit for a downtown gathering space than Faribault’s historic and centrally located library. Late last year, librarian Delane James put some tables and benches near an old entryway to help visitors envision what might go there.

To come up with more formal and extensive plans, the Friends turned to Perkins & Will, the same architecture and design firm the city used for the Downtown Master Plan. Following the master plan, the design seeks to combine historic charm with green space.

Of course, the Friends of the Library dreamed of such a vision, but the resources have never been there to make it happen. Bringing the plan to fruition would still require significant fundraising in the near future.

But while the City Council isn’t likely to fund the project, it has spent quite a bit of money on improving the library and nearby surroundings. The council has already approved funds for roof repairs, new carpeting and a parking lot reconstruction. The city is even preparing to undertake a reconstruction project to improve Central Avenue in front of the library. To James, that means now the right time for the library to think big, and that argument won traction from several council members.

“We’re definitely on the right track,” Councilor Elizabeth Cap said. “I think this plaza is really an appealing gathering space.”

Others were somewhat more skeptical of the initial design. Noting that the library’s historic status and regal architecture make it an iconic Faribault image, Councilor Tom Spooner said he wanted to see the final design mesh well with the structure.

The library sits on the National Register of Historic Places and is within the Downtown Historic District, so such concerns will need to be actively evaluated. That also means the city’s Heritage Preservation Commission will get its say on the project.

Councilor Janna Viscomi raised concerns over the proposed pergolas, which were also a sore spot with the library board. Board members preferred the area to be a simple green space, while Viscomi suggested putting up a canopy.

“Some days, it could be raining,” Viscomi said. If you’re going to go to the effort to put something up there, why not put up a solid canopy?”

Along with the additional amenities would come parking along the east side of the library. The parking won’t exactly be new, as it’s set to replace spots lost with to the Hillside Apartment complex directly across the street. The space previously served as public parking.

Under preliminary plans, 15 additional parking spaces would be located on the southwest side of Peace Park, the small, triangular area located at the intersection of Division Street and First Avenue Northeast. The park itself is limited for development, and not only because of its awkward location.

According to the Rice County Historical Society, Peace Park was once used as a former Native American burial ground. However, City Engineer Mark Duchene said that from studying photographs, the area where extra parking would go should not disturb any burial sites.

The Heritage Preservation Commission’s Karl Vohs, who was at the meeting, raised concerns over the plan. However, Duchene said that photos of the area indicate that it was actually a part of Trunk Highway 218, and underground utilities currently pass through it.

Others raised concerns that the additional parking would result in the closure of the small Park Place street, pushing more traffic into an already crowded intersection. However, Duchene said he doubted the change would significantly hamper traffic flow.

The proposal now goes to the Heritage Preservation Commission for its input. 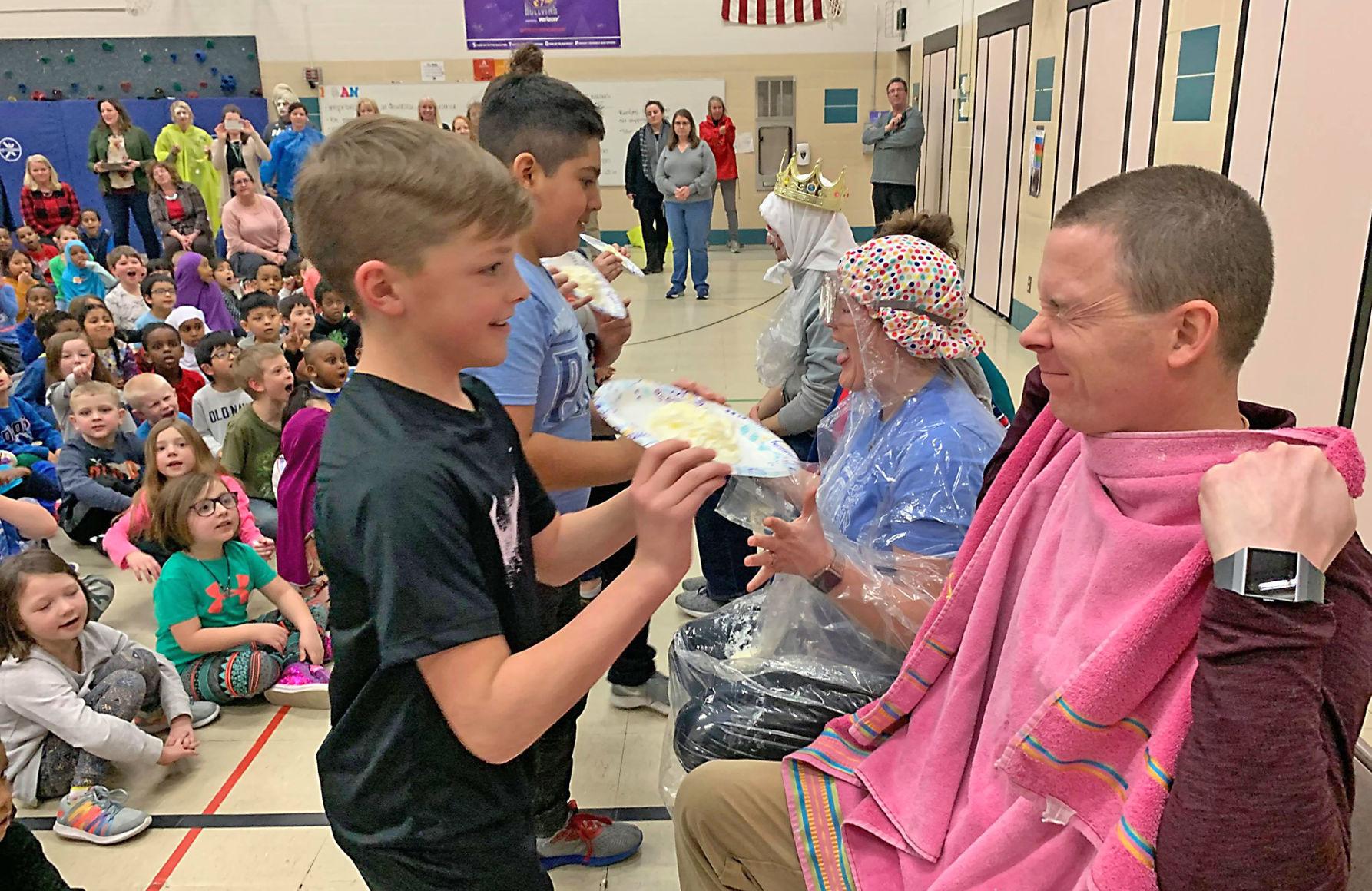 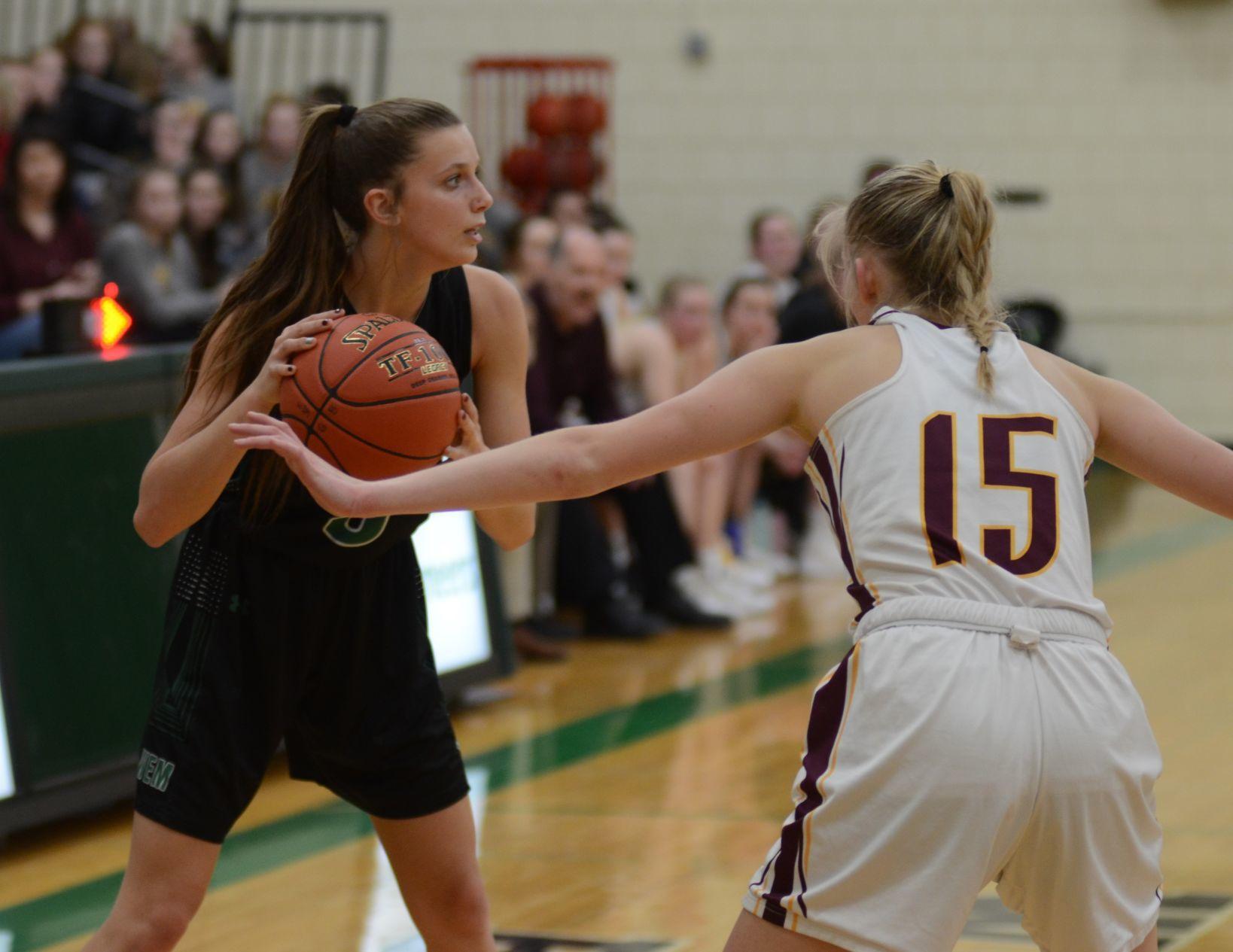 WEM’s Toryn Richards works around the perimeter of the Medford defense on earlier this season. Richards and the Buccaneers will try to secure a trip to the state tournament Friday against Sleepy Eye-St. Mary’s. (Daily News file photo)

A Blooming Prairie man wanted for a murder last month in Las Vegas was taken into custody Wednesday night after a deputy noticed a suspicious vehicle parked at an Interstate 35 truck stop.

The man, Mark Allen Doocy, 60, was reportedly inside an SUV parked at the Flying J Truck Stop at the I-35/Hwy. 19 interchange. Both Doocy and the SUV are connected to a Feb. 28 homicide, according to a release from Rice County Sheriff Troy Dunn. Several deputies and officers, called shortly after 7:30 p.m. to assist in apprehending Doocy, were unable to get him to respond.

Members of the area’s tactical team later used a chemical aerosol and other non-lethal tactics in an attempt to get Doocy to respond and exit the SUV, but he continued to be non-compliant, said Dunn. Just before midnight, officers entered the SUV and extracted Doocy, arrested him and turned him over to Cannon Falls ambulance personnel for treatment and transport to Northfield Hospital.

He was later transferred to a Twin Cities hospital where he is listed in stable condition. Rice County deputies have the suspect in custody at the hospital. He’s expected to be released from the hospital and transported to the Rice County Jail Thursday to be held on the Nevada homicide/murder with a deadly weapon warrant pending an extradition hearing.

“I think the biggest thing for people to understand is Faribault High School is so drastically different than any other high school around us,” said Bente. “We’re more like a city school than a country school.”

At FHS, Bente said staff like to say students “haven’t graduated yet” with a strong emphasis on the “yet.” He compares it to students attending a four-year college but instead graduating after five or six years, not because they failed, but because it simply takes them longer to fulfill their requirements. Eight percent of FHS students continued their high school education after four years in 2019, and that’s the same as the state average.

Bente pointed out that many FHS students are Somali immigrants who know little to no English when they first enroll. In 2019, 35% of English learner (EL) students continued pursuing their high school diplomas after the common four-year period. In fact, the 89% seven-year graduation rate at FHS for 2019 is slightly above the state seven-year average of 88%.

“The vast majority of [English Learner students] will graduate in five, six or seven years, which is still amazing considering you’re putting them through 13 years of education in six years, and they’re learning English on top of it,” said Bente.

The implementation of a seven-period day this fall could also boost the FHS graduation rate in the long run, but that won’t be reflected in statistics for another five years. Bente recognizes there are no quick fixes, but knowing the story behind the numbers, he believes the district is doing well.