Faribo West Mall was the place to be Thursday evening for anyone interested in sampling an almost endless offering of foods prepared right here in the local area. 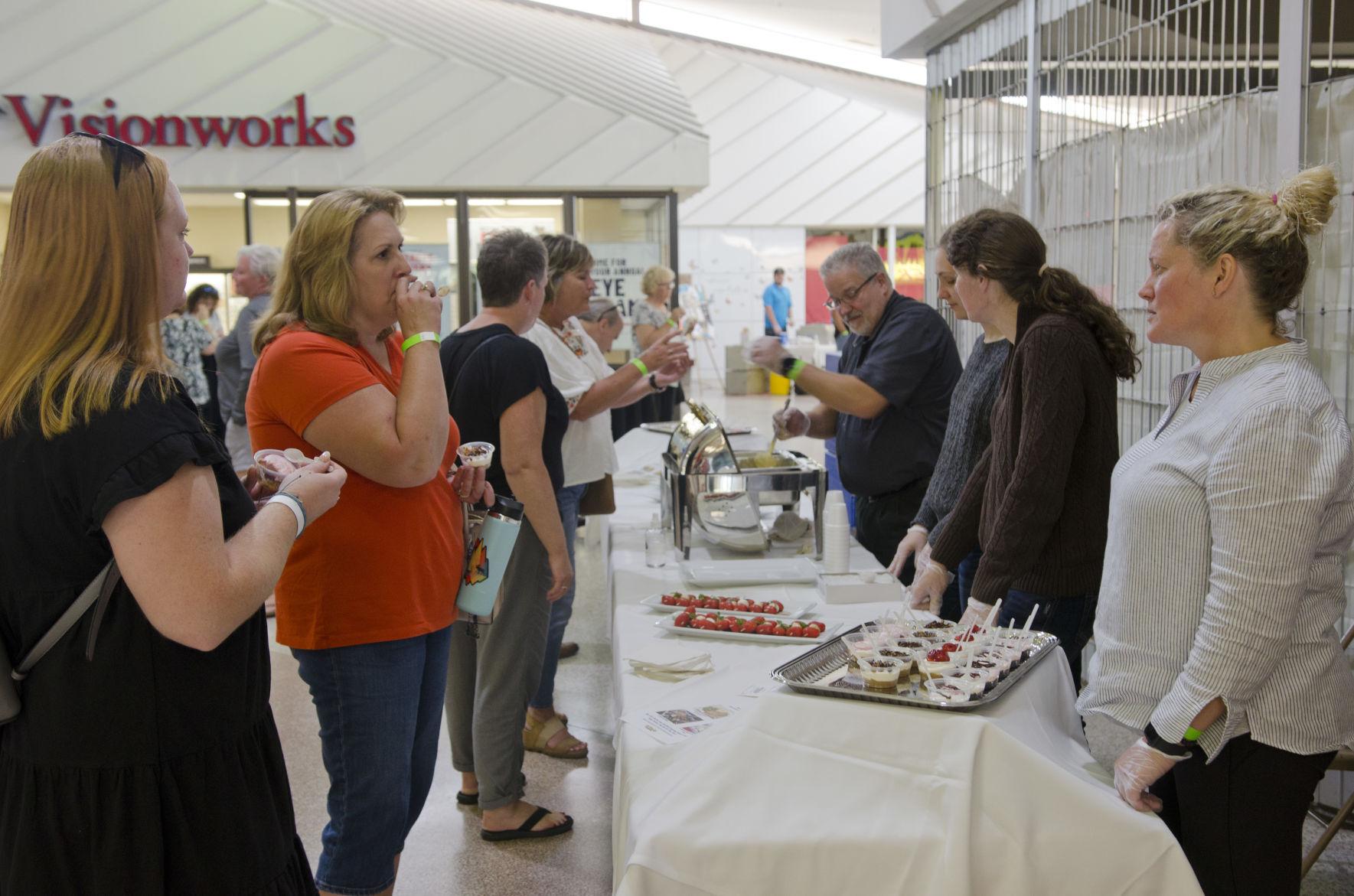 Attendees of the Taste of Faribault event had the opportunity to sample an array of desserts, appetizers, sides and main dishes Thursday evening. (Michelle Vlasak/southernminn.com)

With vendors set up along the edges of the mall, participants were eager to try traditional and new favorites at the 29th Taste of Faribault event, hosted by the Faribault Area Chamber of Commerce. 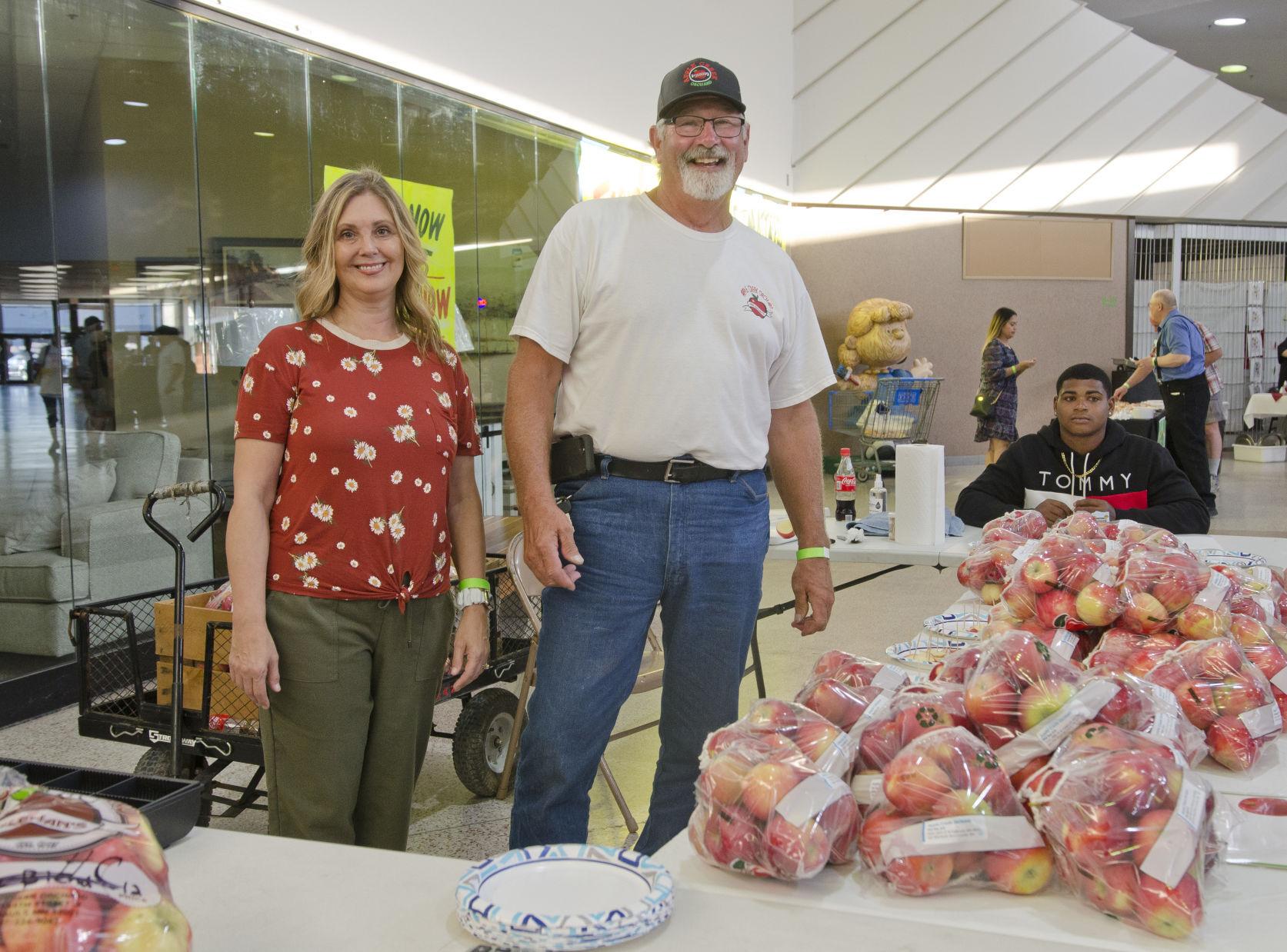 Former owner of Apple Creek Orchard, Dan Ableman, joins new owner Tami Theis at the Taste of Faribault event. Enjoying the event each year, Ableman said he’s been participating since the start for 10 to 12 years. Theis looked forward to getting to know everybody. (Michelle Vlasak/southernminn.com)

From Winjum’s smoked mac and cheese, Apple Creek Orchard’s First Kiss apples, Basher’s homemade stuffed cabbage roll soup and Fareway’s cotton candy grapes, there something available for nearly every taste. Along with the appetizers, sides and main dishes, there were plenty of tasty desserts and baked goods available for those with a sweet tooth.

Attending the Taste event for the 29th year was Jeff LaBeau of the Depot Bar & Grill, a founding member of the event and has returned every year since. With a strong love for the community, LaBeau particularly enjoys seeing his friends and interacting with the crowd. 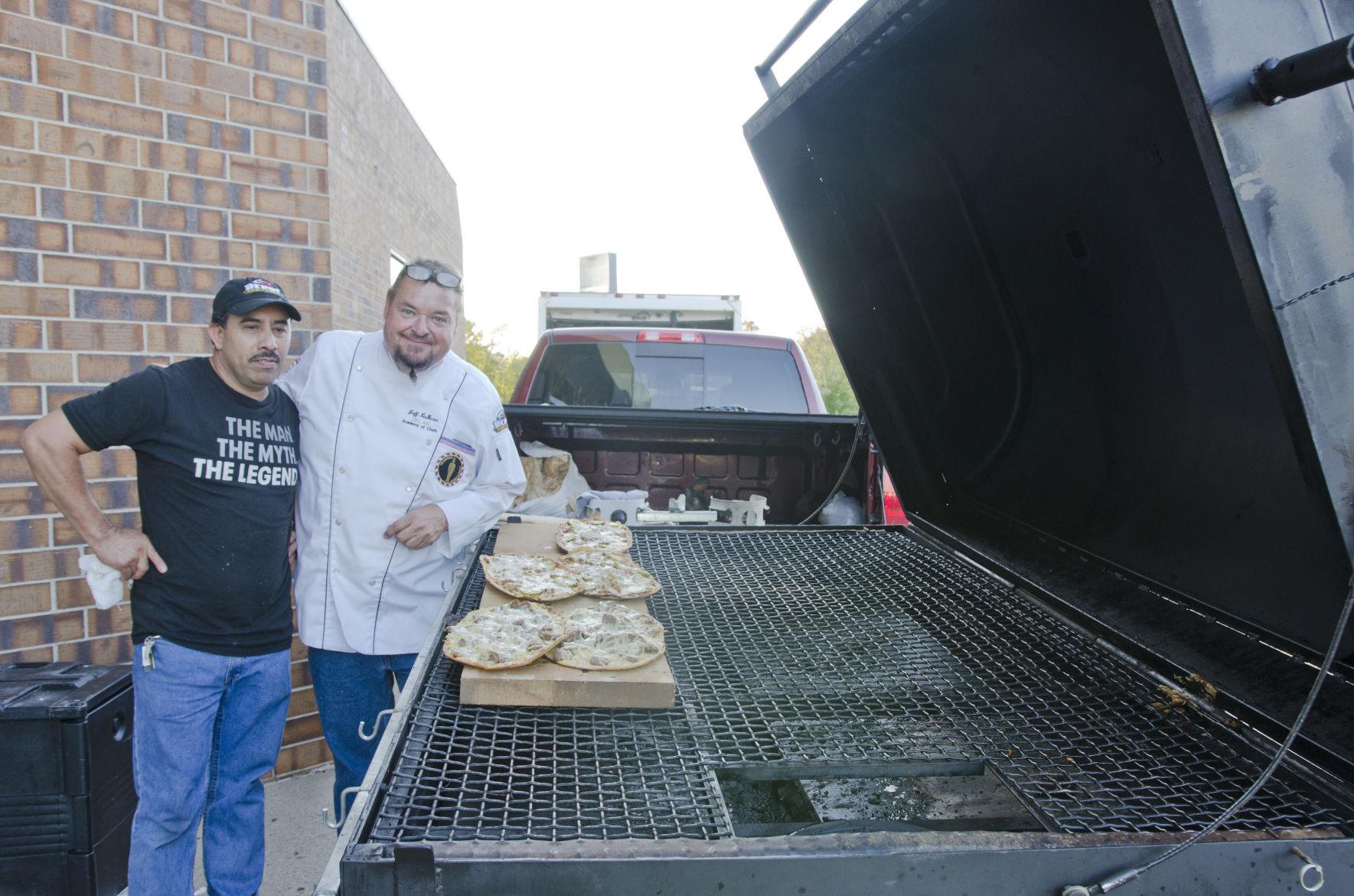 Chef Jeff LaBeau and Fernando Tobar of The Depot, serve an Oktoberfest themed flatbread pizza and unique blend of barbecue pulled pork, pickles, onions and crushed fritos made on the “Smokezilla.” (Michelle Vlasak/southernminn.com)

Each year, he tries to bring in food that is not always found inside the restaurant. On Thursday, he prepared two flatbread pizzas: an Oktoberfest pizza complete with sauerkraut and brats, along with a barbecue pulled pork, pickles and onions, topped with crushed Frito chips. If attendees show a particular interest in the new food he prepared specifically for the chamber event, LaBeau says he sometimes features it on certain days at the restaurant.

About an hour into the evening, Michele Voegele with Channel Inn in Warsaw, also a previous Taste participant, reported her booth itwas busy and there was a good turnout, as they had to run back and grab more blood Mary mix. Server Jacki Larkin was helping for the second year, something she enjoys doing at such a fun event. 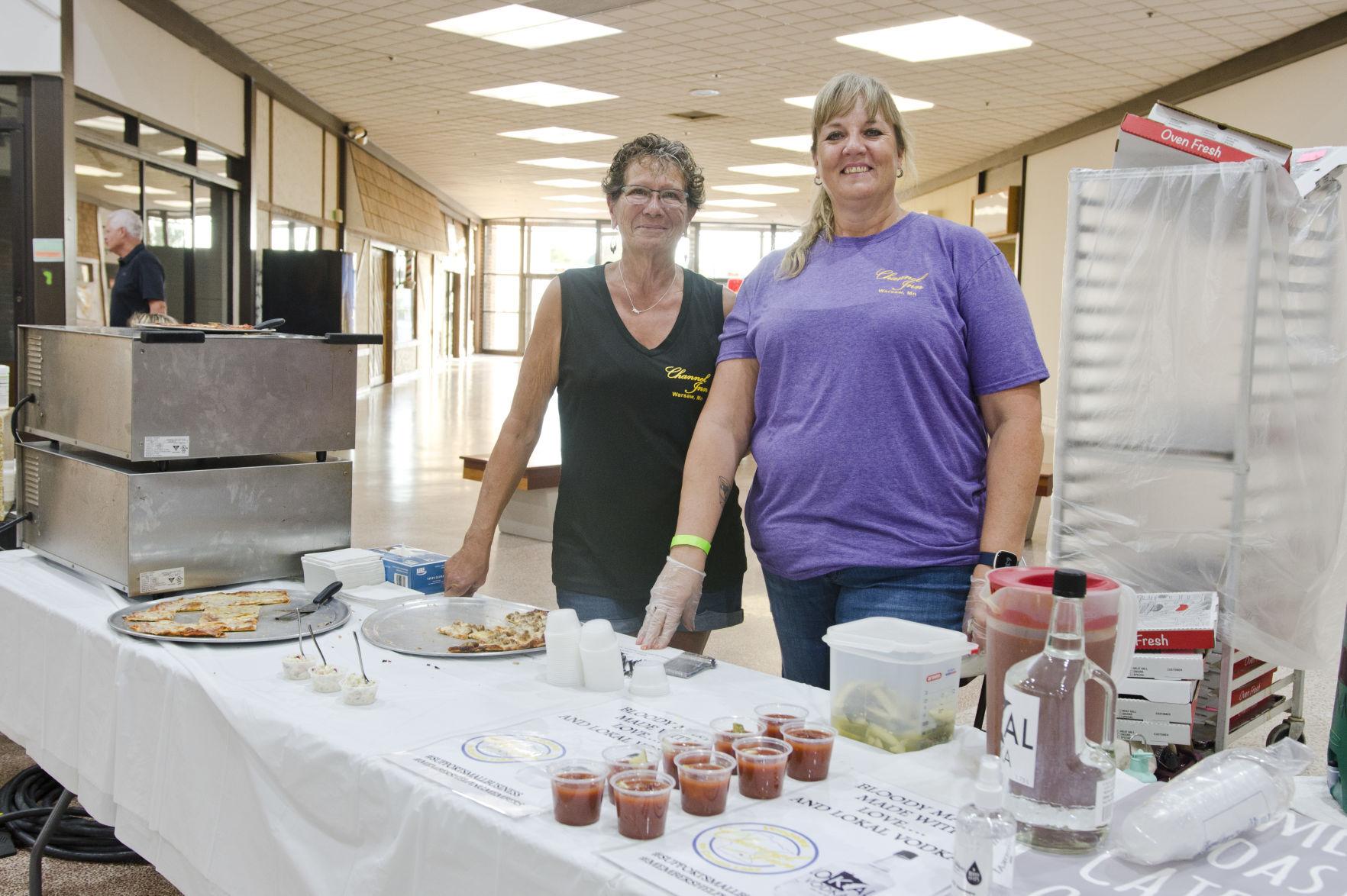 While it’s true the Taste event is a great time for longtime business owners in the area to continue building relationships and interacting with crowds, it’s an even better opportunity for new businesses to introduce themselves to the community.

Owners of Good Day Coffee, Jessica Prill and Cathy Collison, participated in the Taste event for the first time Thursday. Good Day Coffee opened its doors to the public Dec. 18 at its 318 Central Ave. location. Featuring coffee and baked goods made from scratch, both Prill and Collison agree that events like Taste give new businesses a chance to come out and let people know more about what they have to offer. 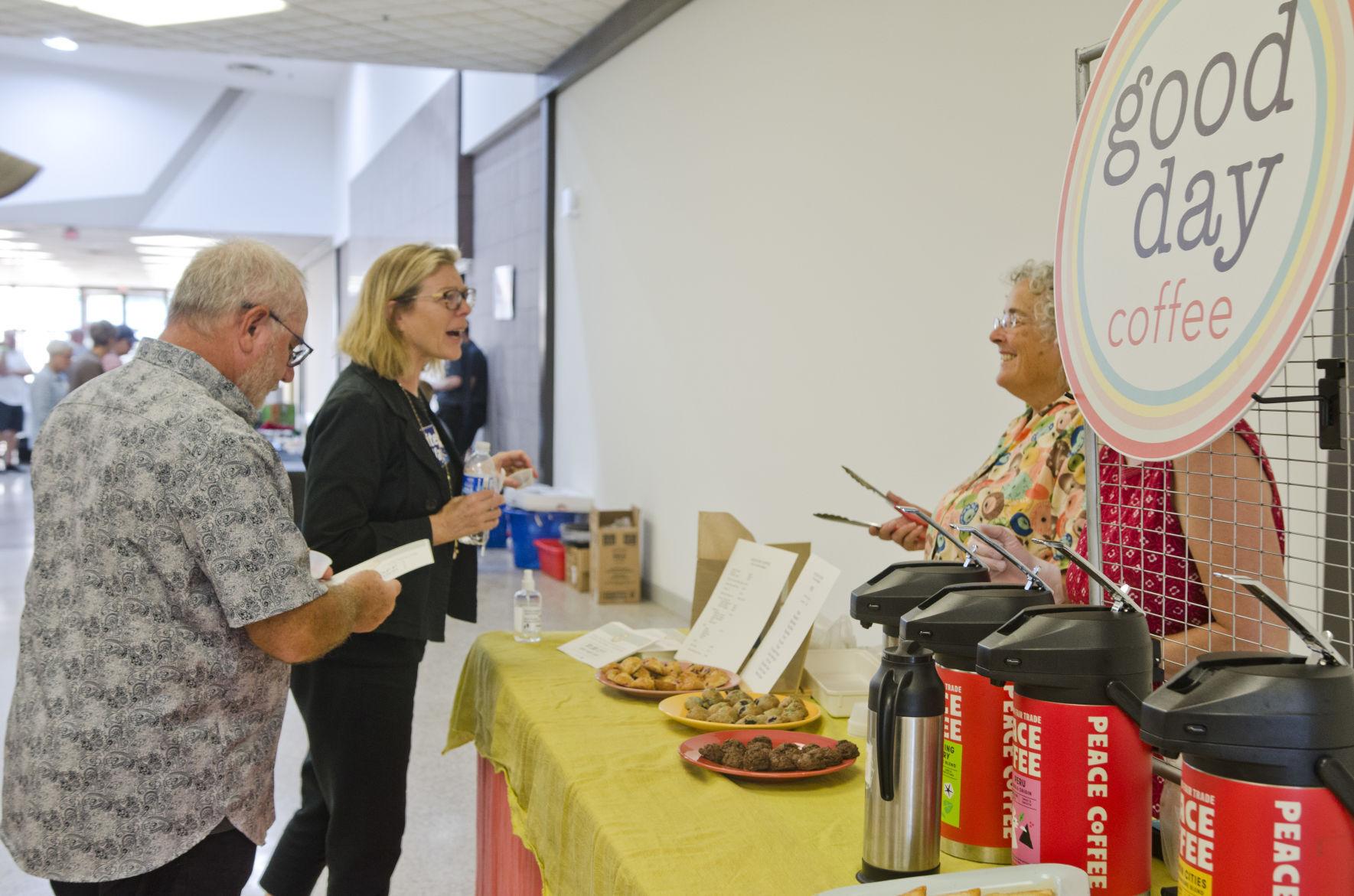 While it’s a good opportunity for local businesses regardless of the amount of time they’ve been operating, it’s an even better time for new businesses, like Good Day Coffee, to let others know where they are located and what they have to offer. (Michelle Vlasak/southernminn.com)

Along with samples of different blends of coffee, Prill and Collison offered mini muffin tops in the flavors of cranberry orange, blueberry lemon and double chocolate espresso.

Though Apple Creek Orchard is far from a new business, there was a new face helping serve varieties of apples. Tami Theis recently purchased the orchard from longtime owner Dan Ableman Aug. 11. Both Theis and Ableman were at the Taste offering samples of early fall apples like First Kiss, Honeycrisp and Zestar.

Former owner of Apple Creek Orchard, Dan Ableman, joins new owner Tami Theis at the Taste of Faribault event. Enjoying the event each year, Ableman said he’s been participating since the start for 10 to 12 years. Theis looked forward to getting to know everybody. (Michelle Vlasak/southernminn.com)

Ableman said he’s been participating in the Taste since it started, and enjoys getting a chance to meet new customers and interact with current customers. For Theis, the event was a great way for her to get to know everybody and introduce some of the new things she has planned for the fall and next summer.

Attendees seemed to enjoy the event just as much as the vendors, especially for first-timers Winnie Hughes and Elizabeth Paquette. 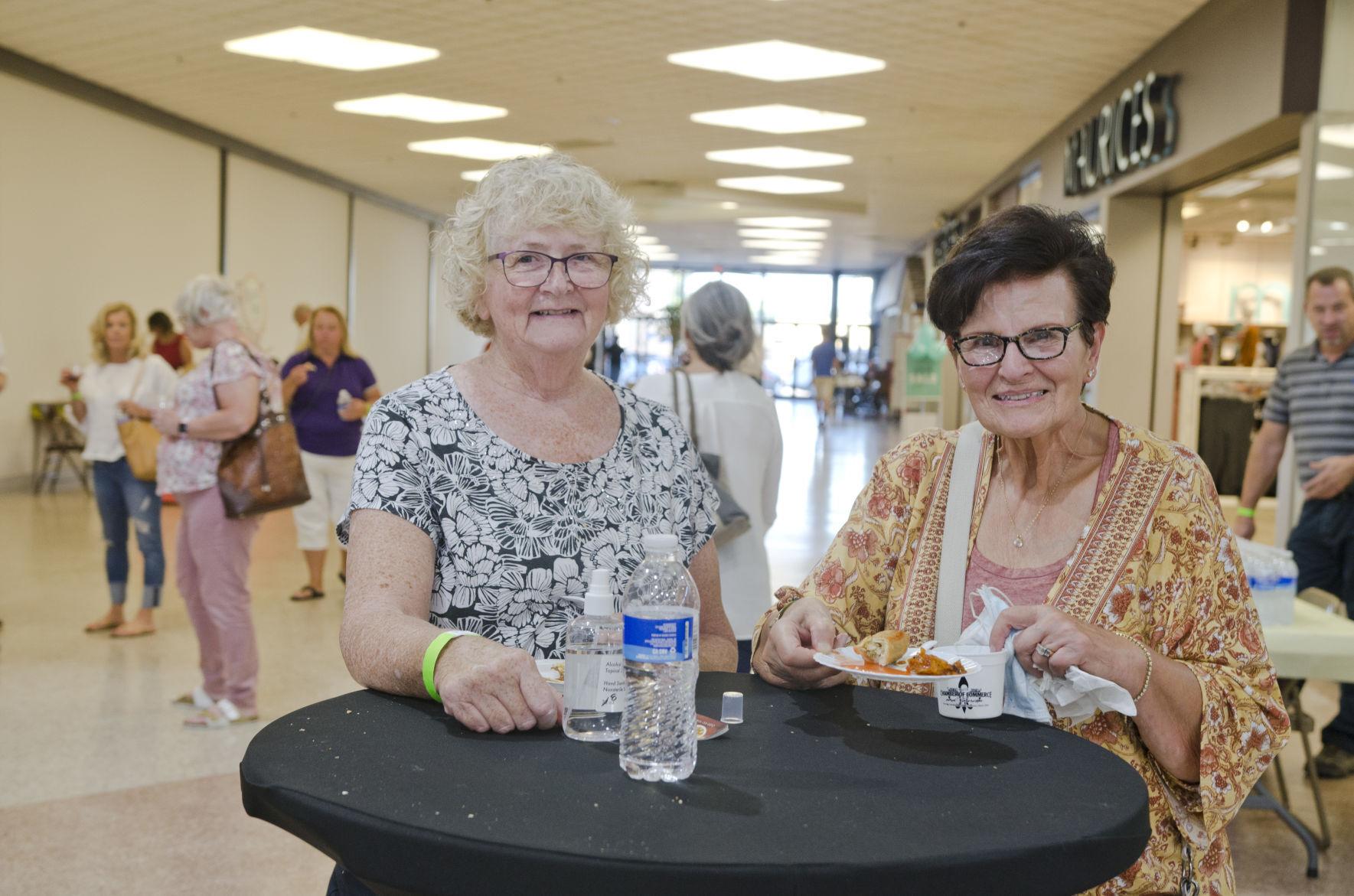 Faribault residents Winnie Hughes, left, and Elizabeth Paquette enjoy their first experience at the Taste of Faribault. Both were glad they decided to come out; the variety of food options and delightful choices were an added bonus. (Michelle Vlasak/southernminn.com)

Both residents of Faribault, Hughes and Paquette agreed they were glad they decided to participate in the event and liked the variety of good foods and drinks available.

“It shows a good variety of everything Faribault offers, but I think we’re missing a few restaurants,” said Hughes. “It’s all really good though.”

Though she tasted many delicious things, Paquette admits the bloody Marys and homemade pizzas from Channel Inn are hard to beat. A frequent customer of the Warsaw bar and restaurant, Paquette says her boys always go there to eat when while doing their fieldwork in the area.

She also enjoyed the mini muffins baked by Good Day Coffee, noting they had the “best texture” she’s ever had in a muffin.

Hughes pointed out it was good to see the Apple Creek Orchard folks there too, both with the new owner and apples that are currently available at the orchard. 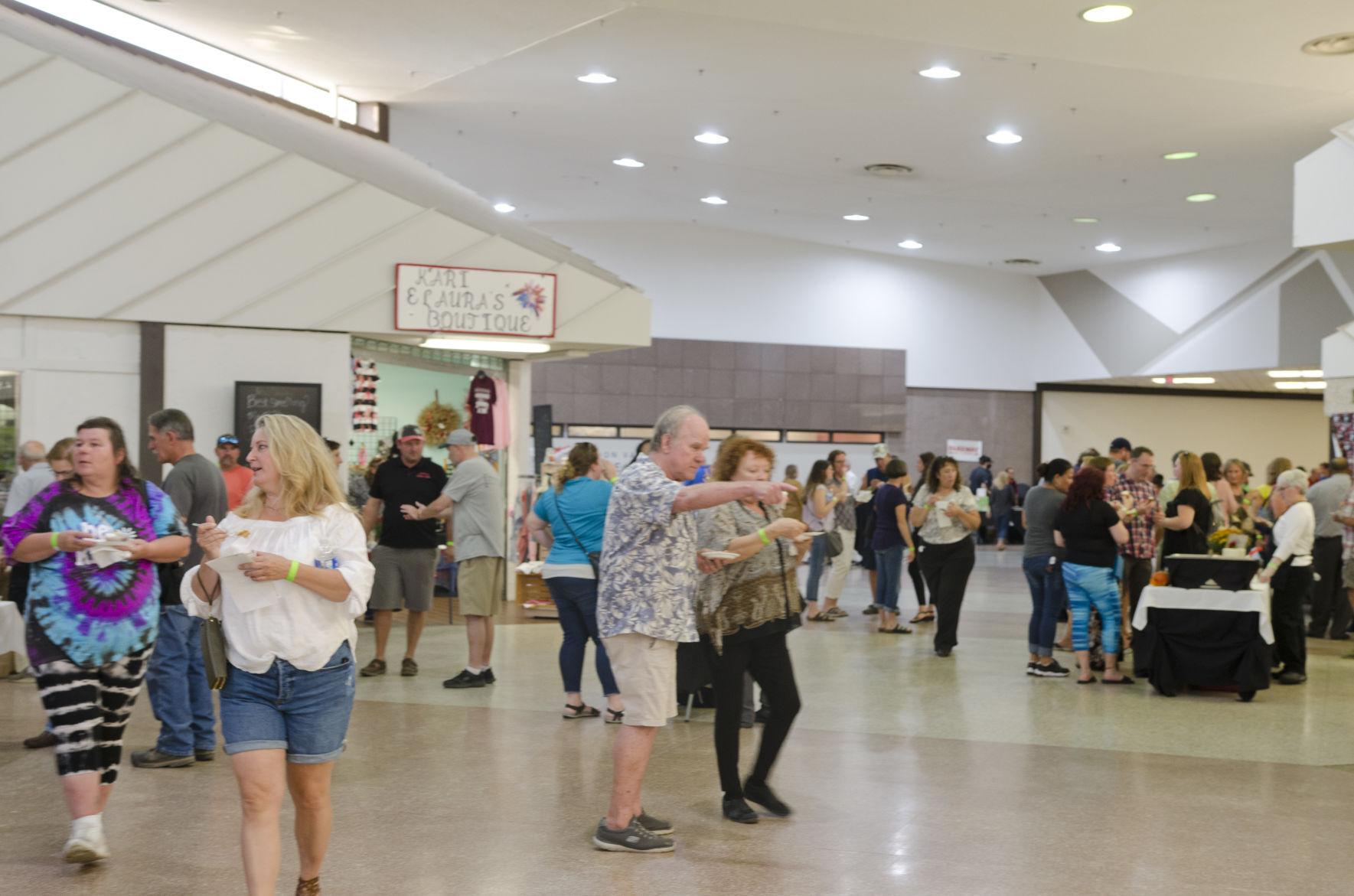 The Chamber of Commerce’s Taste of Faribault event was held in the Faribo West Mall for the second year in a row. (Michelle Vlasak/southernminn.com)

A Faribault man is facing five felonies after two juveniles said he sexually assaulted them prior to him being sent to prison in 2018.

According to the criminal complaint, Owatonna police were alerted to the alleged sexual abuse in February when an inmate at the Stillwater state prison said Deluna admitted to him that he “accidentally” touched one of the victims when he was “high on pills.”

Police and a child protection worker met with the victims on Feb. 26, but only one victim at the time reportedly said Deluna had touched her inappropriately at their home in Owatonna prior to his incarceration.

On Sept. 2, the second victim came forward and said Deluna had sexually abused her at their home in Owatonna and in his vehicle, according to court documents. The abuse allegedly happened over a span of four years before Deluna went to prison.

Deluna was in prison for a 2017 felony weapons conviction. He was sentenced to five years in August 2018 and released to supervised probation with Rice County Community Corrections Aug. 16.

Steele County currently has a warrant out for his arrest.

In other court news:

• Ricky David Stadler, 52, of Faribault, was sentenced Friday in Rice County court to five years of probation on a charge of false imprisonment after petitioning the court in February for a stay of adjudication.

Stadler was charged in November 2019 after a sexual encounter in which the victim told police she cooperated with Stadler out of fear for her life.

Stadler was also sentenced to 365 days in jail. Of that, he was given credit for three days; 362 days was stayed for five years. Judge Jeffrey Johnson ordered Stadler perform 50 hours of community service within the first year and a half. Attendance at Alcoholics Anonymous/Narcotics Anonymous counts toward the community service.

While the 2022 Faribault preliminary property tax levy approved Tuesday by the City Council is 5.83% higher than the current levy, the tax rate, a better gauge of taxes from year to year, is dropping.

The drop, though small — .25% — will make a difference when taxes come due next May.

If the levy is approved as is, city taxes on a $175,200 residential property — the median home price in Faribault — would drop by $2.41, according to figures presented Tuesday to the City Council by the city’s Finance Director Jeanne Day. But if the county has valued that property 5% higher, the city portion of the owner’s tax bill would rise by almost $48 next year. An increase in valuation would up the amount by $97.78.

A commercial property worth $1 million would see a $30 reduction in its city tax bill should the levy remain unchanged, but a 5% increase in its valuation could mean an increase of about $232. A 10% increase would add $493 to the current amount due.

The levy increases are mainly due to increased personnel costs, according to Day.

Of the nearly 592,300 levy hike, $478,200 is for personnel: healthcare and cost of living increases required in contracts the city has with its unions. The preliminary levy is $10.75 million, a figure which could drop before final approval in December, but by law cannot increase.

The problem seems that there are few places to cut. No additional personnel are included in the 2022 budget, though more overtime is anticipated in 2022 by the Police Department ($5,383) and the Community Development Department plans to spend $7,536 on an intern in 2022.

Parks & Recreation Director Paul Peanasky, like so many other employers across the nation, is losing good employees to higher-paying jobs, and requested a $2 per hour pay increase for seasonal Parks & Rec workers. That request will tack on about $100,000 onto next year’s spending plan.

The city’s tax capacity — Faribault’s property tax rate multiplied by its estimated market value of all taxable properties in the city — has grown by almost 6.1% to $20.5 million in the last year.

The council also approved levies for the Economic Development, and Housing and Redevelopment authorities Tuesday.

YOUR TURN TO SPEAK

A required public hearing where taxpayers can bring questions and concerns about the proposed 2022 tax levies and budget to the council is set for 6 p.m. Tuesday, Dec. 14 in council chambers in Faribault City Hall.