Todd Markman participates in the community in a variety of capacities, volunteering and serving on different boards and committees. He’s pictured here talking to Kymn Anderson at Business Before Hours. (Photo courtesy of Faribault Chamber of Commerce)

Todd Markman believes passion is an essential component to serving on an organization’s board, fundraising or volunteering for a cause.

With all the ways he’s offered his time and talents to the local community over the years, it’s evident that Markman has a passion for Faribault.

“I’m involved in a lot of stuff, and that’s because I like it, I can do it, my job allows me to do it, and I know that it’s important for a community,” Markman said. 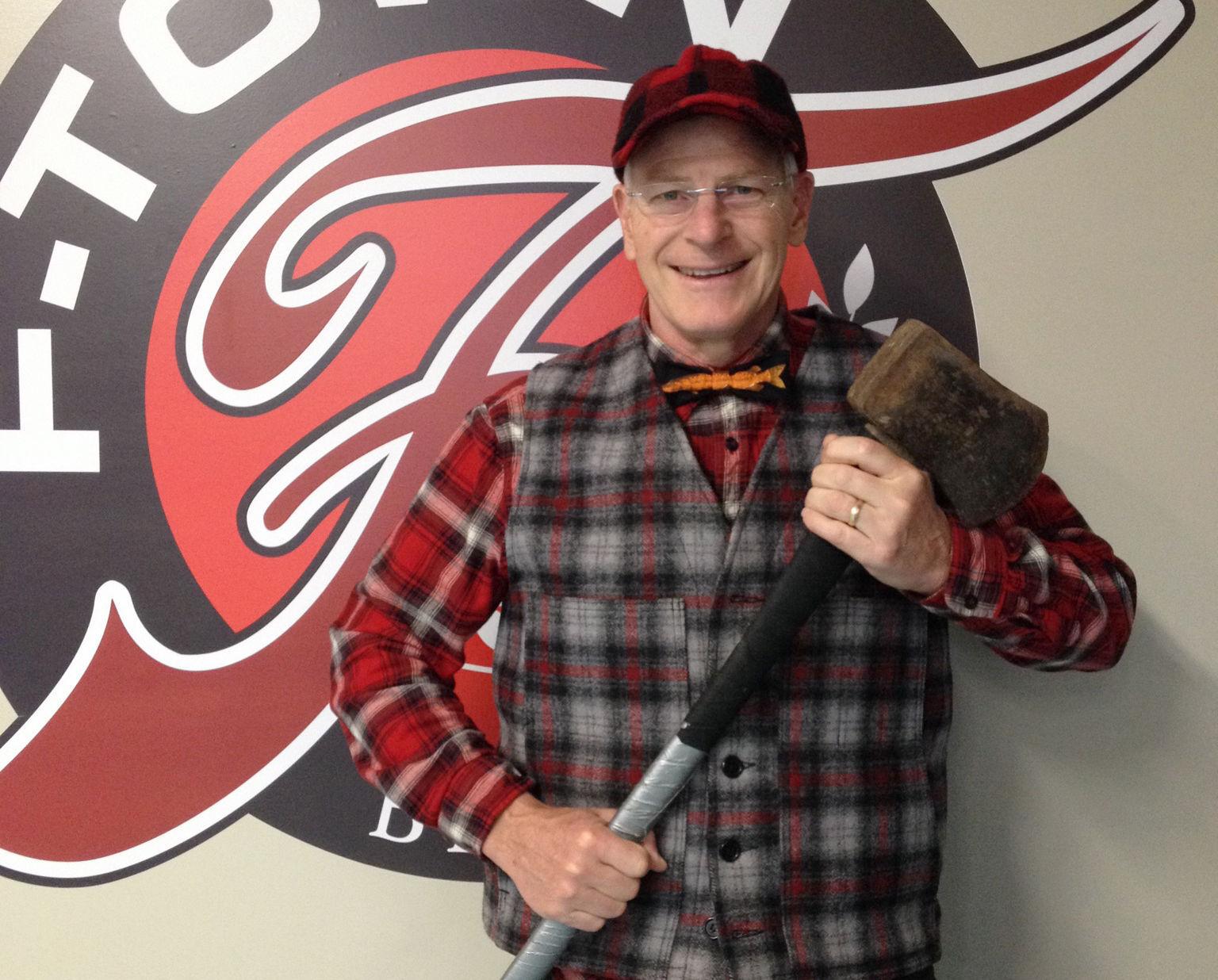 Community involvement is something Todd Markman enjoys, whether he’s volunteering or participating in events like the Flannel Formal. He’s pictured here in 2016, at the first Flannel Formal. (Photo courtesy of Faribault Chamber of Commerce)

Since returning to Faribault in 1990 as a professional banker, Markman has served on dozens of community boards, helped launch a leadership education program, raised money for various causes and volunteered his time doing things he enjoys. And he doesn’t plan to stop anytime soon.

A number of community members at that time, including Markman, realized many of the same people served on two or three different boards. It begged the question, “What happens when these community leaders retire?” Several leaders in the community had needed to travel to Rochester, or even Louisiana, for leadership training. Markman and others asked themselves, “Why doesn’t Faribault have a leadership training program?” As a result, Faribault’s Future was born.

As the CEO of Reliance Bank in Faribault, Markman said his company has sent an employee to represent a Faribault’s Future class every year since the bank’s opening in 2007. Not everyone who enrolls in the leadership training joins a community board or even continues to live in Faribault, he said, but the purpose of the class is to inform participants’ decision to become involved.

Markman believes finding new and younger community leaders is a constant need, but he does believe millennials and Generation Z are interested in community involvement in a different way than baby boomers. The difference, he’s found, is that younger generations tend to bounce from one cause to the next year after year instead of serving on a committee for the long term.

“It’s just a different way,” Markman said. “I’m optimistic … that the next generation will continue to rise to the needs of the community in whatever ways they can be of help, and want to. And that’s the biggest thing — the desire to want. I don’t believe people should go onto a board or become involved just to fill their resume. If their heart isn’t into whatever they’re doing, it’s not something they should probably sign up to do because then they give it less effort, and that’s very visible to those working in an organization.”

The first Faribault’s Future class, of which Markman was a member, decided to start the Faribault Foundation, which works to enhance the quality of life for the community. He’s served on the Board of Directors ever since it started around 20 years ago and for about 12 of those years, he’s acted as its treasurer. Markman has put his financial skills to work by helping the Faribault Foundation manage the money it raises to invest in activities that improve the local community. The Basic Blessings Backpack Program, which sends a bag of food home with students for the weekend, is one of the Faribault Foundation’s sponsor programs Markman’s company, Reliance Bank, co-founded with MRG Tool and Die.

The Faribault Foundation is just one of the many boards Markman has served on throughout the past 20 years. He currently serves as president of the Faribault Main Street Board of Directors, an affiliate of the Chamber of Commerce that aims to strengthen downtown businesses. He also served as Chamber board chair for a term.

Through the Big Brothers Big Sisters program, Markman has agreed to become a “Big” for a Faribault Public Schools AVID (Advancement Via Individual Determination) student. Using his financial skills again, he heads up the Disbursements Committee of the Sertoma (Service to Mankind) Club in Faribault.

Throughout the years, Markman has offered his time to different community fundraising efforts that made projects possible like the addition of Buckham West and the HealthFinders Collaborative expansion. Recently, he joined a group to raise money for District One Hospital in Faribault. 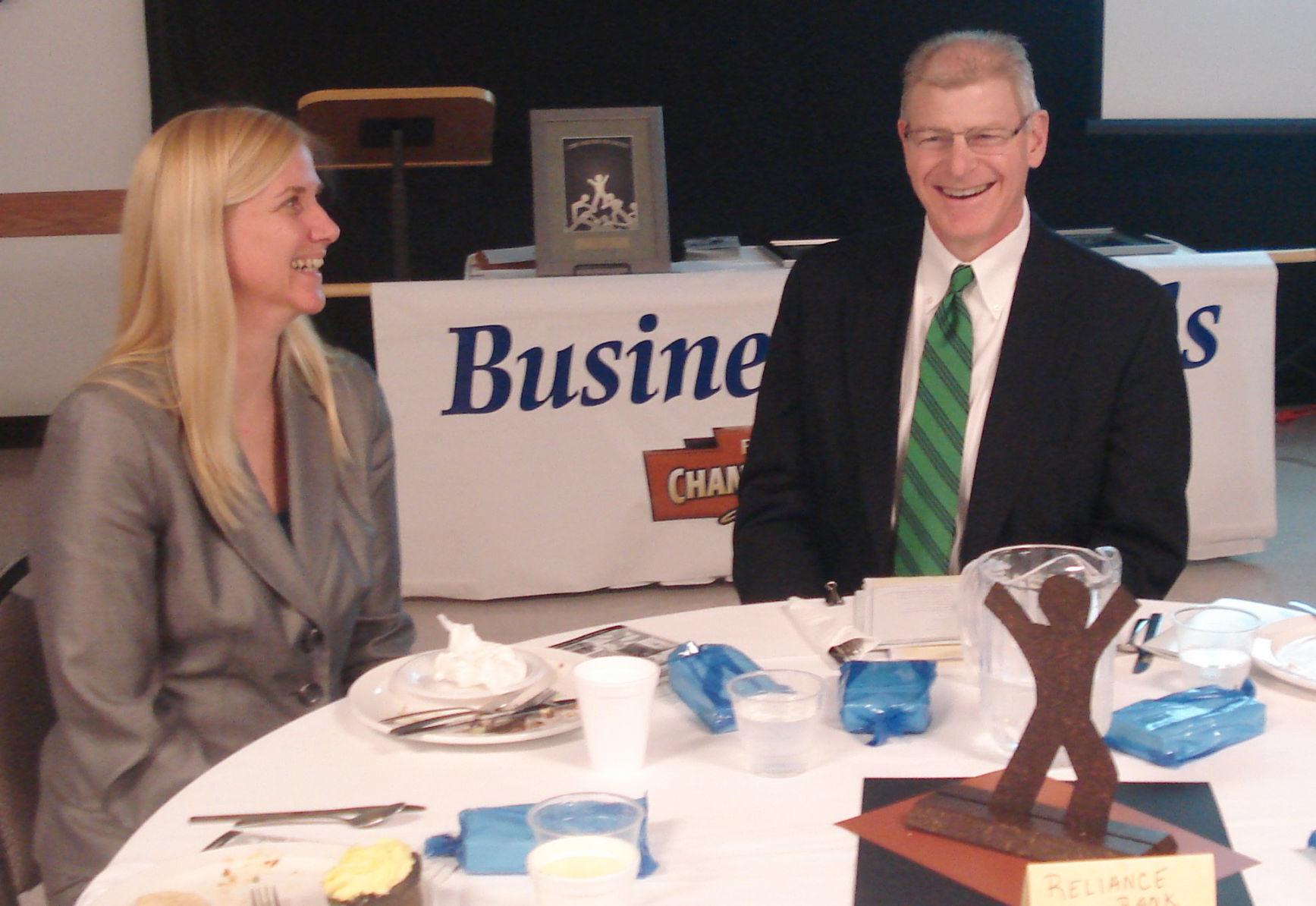 Fundraisers and leadership boards aside, Markman has spent his free time combing his interest in hockey with community service. He also announces for Faribault High School hockey and co-manages the senior men’s hockey league in Faribault. Previously, he coaches all levels of the Faribault Hockey Association.

“If there’s a person who has a heart for Faribault it would look just like Todd,” said Kymn Anderson, executive director of the Faribault Foundation. “He is involved in so many areas that benefit the community.”

One of Anderson’s favorite projects, which she and Markman worked on together, was called “One Wonderful Thing” in 2003. The idea was to help Faribault residents become aware of the wonderful things happening in their own community. 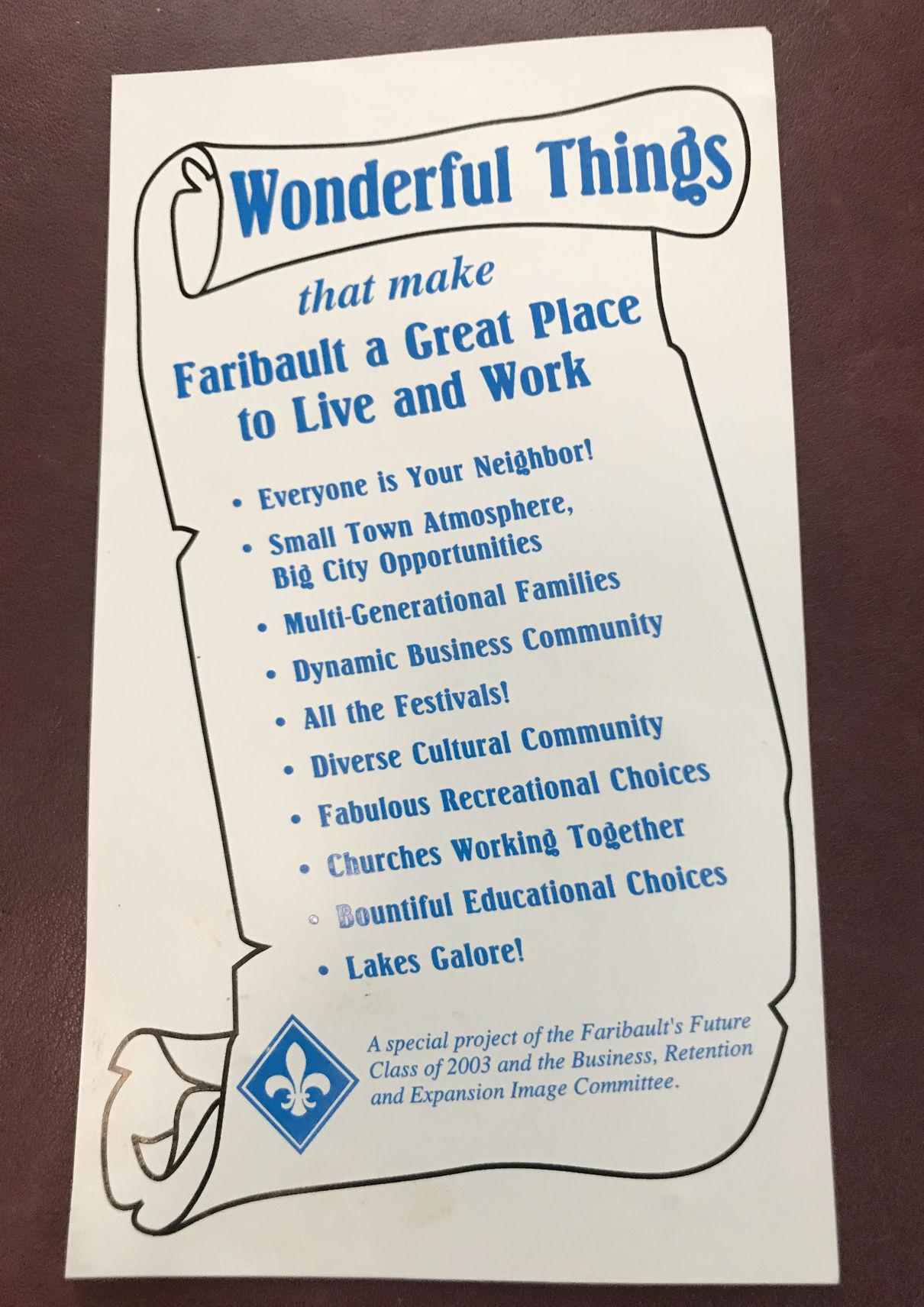 “Wonderful Things” is a 2003 project Todd Markman worked on with Kymn Anderson to remind the community of the great offerings in Faribault. The magnet pictured is a culmination of the ideas community members submitted. (Photo courtesy of Kymn Anderson)

“We had hundreds and hundreds of people write on paper one thing they liked about Faribault and culminated that into a magnet we gave away all over town,” Anderson said. “It was a while back, but it was a wonderful project, just a positive thing to reinforce how fortunate we are to live in this community, and that’s the kind of project and kind of work I always see Todd Markman involved in.”

Markman himself views Faribault as an “increasingly diverse community where the sky’s the limit.” He listed the schools, entertainment, parks and recreation as aspects that make Faribault like a secret spot with plenty of opportunities.

“We’re going to continue to work together in the direction we’re going — upward and onward, not without its challenges, and that’s why we all get involved,” Markman said. “I’m just really blessed to be as involved as I am.” 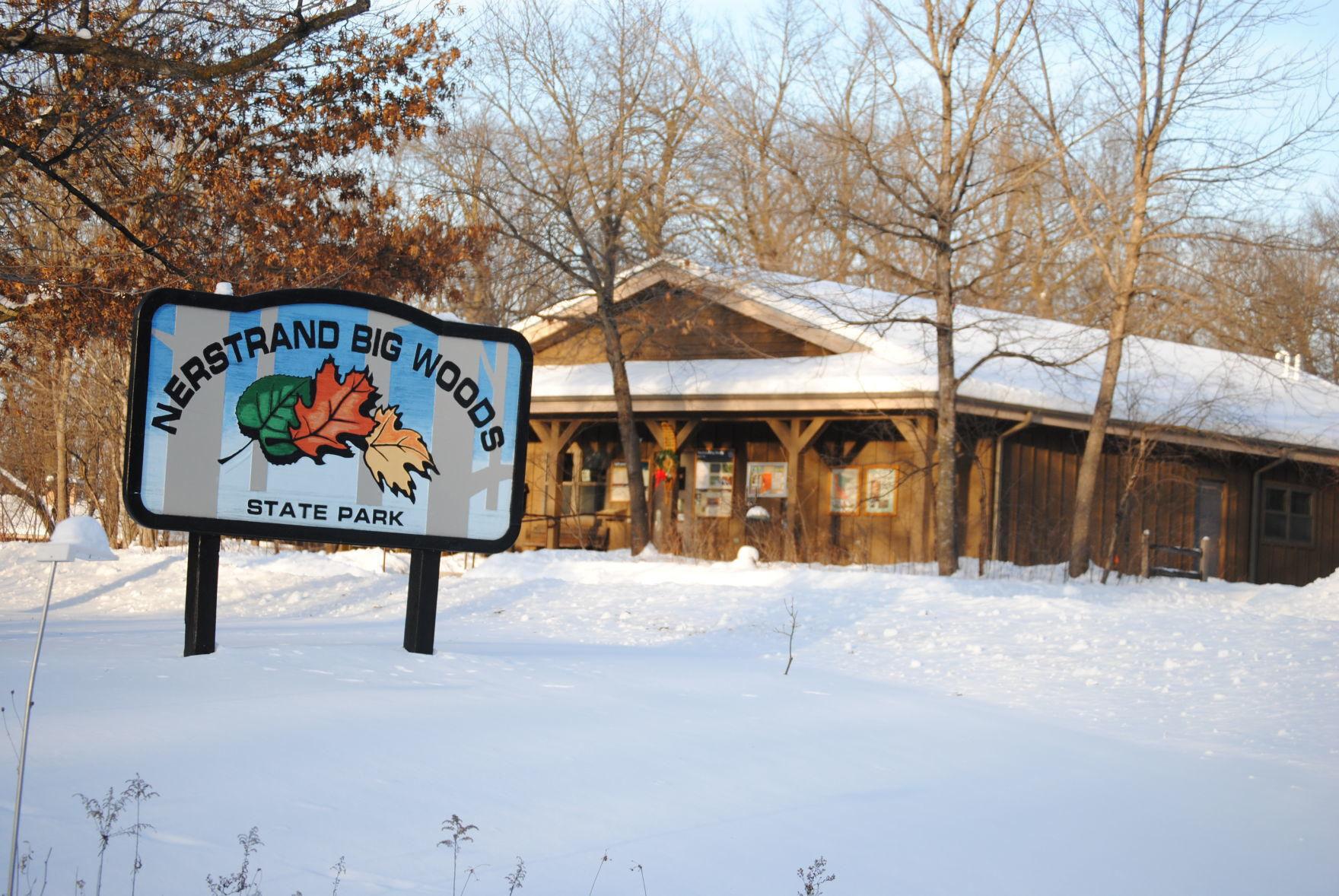