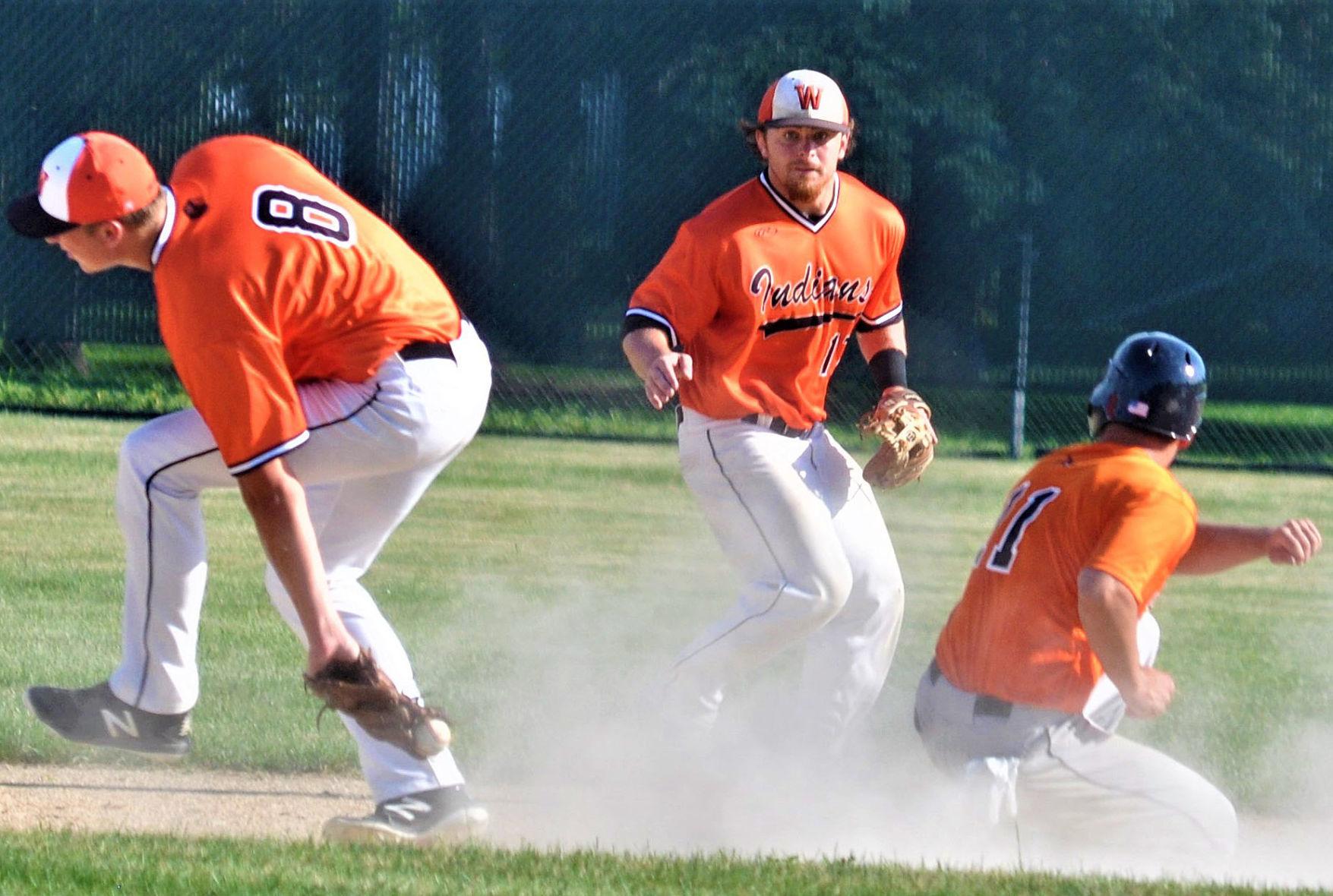 Judy Becker started her career as a special education paraprofessional at Lincoln Elementary in 1989. After serving students at all but one school in the district, she concluded her career at Lincoln June 4. (Misty Schwab/Faribault Daily News)

Judy Becker has taught her students throughout her career as a special education paraprofessional to “believe in kindness,” just as her shirt says. (Misty Schwab/Faribault Daily News)

“It didn’t seem like work at all,” is how Judy Becker described her role in the Faribault schools.

For the past 31 years, Becker served as a special education paraprofessional. And exactly 49 years after graduating from Faribault High School, she began her retirement June 4. She had contemplated working one more year but ultimately decided to “give someone else a chance to enjoy that position.”

Becker’s career in education began in her late 30s. She wanted to find a job with benefits that paired well with raising her three children, then 10, 11 and 14. She began substituting for special education classes at Lincoln Elementary, which gave her the opportunity to start her long-term career.

“After working just a short time in Dave Anderson’s and Colleen Welton’s [special education] classroom, my heart was forever touched by students with their unique personalities and loving ways,” said Becker. “I waited for a full-time position, and was hired as an educational assistant March 1, 1989.”

In her first full-time position as an educational assistant, Becker worked with a non-verbal student at the former Faribault Area Training and Education Center. In order to communicate with the student, Becker needed to learn American Sign Language. Together, she and her student learned over 100 signs.

Over the years, Becker has served students at every school in the Faribault district except for Jefferson Elementary. She’s worked with students on all levels, one-on-one or in groups, depending on their needs and goals. One of the biggest changes in the special education department since the start of Becker’s tenure is that students now spend time in class with regular ed students. Becker calls this “a positive influence of social benefits” where students have all their needs addressed and form friendships.

“Always be the best version of yourself” is a quote Becker lives by. She’s told her students and her own children that this is all she will ever ask of them. She encourages others to believe in kindness and follows the philosophy, “Only you have the power to believe in yourself.” Becker also keeps a list of empowering words like “terrific” and “I’m proud of you” as a reminder to give encouragement.

No matter their age or circumstance, Becker said she’s enjoyed working with all of her students, watching them grow and meet their objectives. Oftentimes she offered guidance for homework assignments, like presentations. For several years outside the classroom setting, Becker had a unique opportunity to watch her students apply their on-the-job training skills.

For part of her career, Becker took on the role of job coach while working with special education students at Faribault High School. She took her students to job sites like River Bend Nature Center and the HOPE Center to teach them about the skills necessary for future jobs and to be independent.

“Looking back, all our students were successful, and I was always so proud of their accomplishments,” said Becker. “You could just look in their eyes, and you knew they were so happy with themselves. It was a wonderfully enriched program.”

Whenever Becker sees her former students working in the Faribault community, she feels touched and proud. The same is true when she sees them walk at graduation, to accept their diplomas with their classmates.

After Northfield and Faribault combined for a job training program for special education, Becker returned to the classroom for the last few years of her career. She concluded her tenure the same place she started — at Lincoln Elementary.

Lincoln Principal Brad Palmer said Becker is one of several long time district employees to start at Lincoln and retire at Lincoln. She was an enjoyable employee to be around, said Becker, and she approached her job with a giving mentality.

“Judy was terrific, just one of those happy, all in it for the kids kind of [people] and truly enjoyed working with all special ed students and everyone else at Lincoln,” said Palmer. “… She’d come [to school] with her cup full so she was able to spill over and give to everyone else.”

The coronavirus pandemic made the end of Becker’s career a bit more challenging than she expected as she needed to gain an understanding of distance learning and couldn’t see her students in person. She signed up to help bag lunches in March and eventually helped video record lessons to send to her students, who she called twice a week. Becker also delivered homework to families who couldn’t pick up their packets.

It’s been just over one month since Becker retired, and she and her husband, Tom, who recently retired as a Super Valley truck driver, plan to travel and visit relatives and friends. Becker said her three adult children, Tammy Anderson, David and Jeramie, plus Tammy’s husband, Dean Anderson, are all hard workers and very supportive of her and each other. She also has four grandchildren, Briana, Lexi, Madi and Leighton.

When she isn’t spending time with family, Becker wants to put more miles on her moped and give back to the community by volunteering or applying her care-giving skills in another job opportunity. But as she looks forward to new doors opening, she remembers fondly her 31 years in Faribault Public Schools.

“I will miss my students,” said Becker. “Their smiles, their hugs, embraces and friendly chats. Lastly, my heart is grateful working with a team of dedicated, devoted and caring people who always placed the needs of our students first. I can truly say I’ve really enjoyed working with kids. I’ve enjoyed it; that’s why it was so hard to retire.”

A well-known Northfield area farmer, successful small business owner and township official was killed Saturday after a piece of farm equipment he was driving appears to have rolled over on top of him.

Rice County Sheriff’s deputies found Gary Ebling, 71, about 4:30 p.m. after responding to a call that a tractor had rolled over down an embankment in the 9000 block of Albers Avenue in rural Bridgewater Township west of Northfield, according to a release from the Sheriff’s Office.

The caller reported there was a man trapped under an implement with severe injuries. When deputies arrived, Ebling was deceased, said Sheriff Troy Dunn.

“It appears the operator was mowing the ditch on the east side of the road when it rolled down the embankment, ejecting the tractor operator and partially pinning him under the mower implement,” Dunn said.

The owner of Retail Design Services, Ebling was a successful small businessman with major corporate clients across the country. Yet according to his former Township Board colleague John Holden, Ebling’s passion for the residents of Bridgewater Township often matched or even exceeded his entrepreneurial zeal.

“He was very caring, truly dedicated to having a really great township,” Holden said. “So there he was, on a hot July 4th afternoon, mowing to make sure his area of the township looked beautiful.”

Doug Jones, of rural Nerstrand, also spoke of Ebling’s interest in making Bridgewater all it could be, noting that Ebling was able to see the big picture as well as willing to put in the time and effort to get things done.

First elected to the board in the 2000s, Ebling began his second stint on the board in 2013. During his tenure, the board approved a 30-year long annexation agreement with Dundas, and first began and then took over its own planning and zoning.

In 2005, he was selected by the Rice County Board of Supervisors to serve as Bridgewater’s representative on a countywide economic development planning group. In recent years, he was the supervisor who oversaw roads for the township.

“He was very, very effective, and connected to so many people in the township,” said Glen Castore, Ebling’s longtime colleague on the Board of Supervisors. “He cared a lot about the township, and thought a lot about how it should be operated.”

Leif Knecht, also a longtime member of the Board who served alongside Ebling during his first stint on the board, said his friend and former colleague was a tireless worker who helped to bring about many changes to the township, both big and small.

Even though he’s not on the township board anymore, Knecht said he would call Ebling from time to time. Just a week before Ebling’s death, Knecht said Ebling called when he needed help convincing a neighbor to allow the invasive wild parsnip on his property to be treated.

“That’s an example of the kinds of nuts and bolts things Gary was able to accomplish,” Knecht said. “Occasionally, we viewed things differently but he was wonderful to collaborate with.”

Janalee Cooper, who served as clerk on the town board during Ebling’s first tour on the board, concurred, and called Ebling a “solid, constructive, practical and fair leader.”

In government, Holden said that Ebling was always looking for ways to help promote the interests of Bridgewater Township. To that end, he cultivated strong working relationships with Rice County as well as neighboring jurisdictions, particularly Dundas and Northfield.

Holden said that among Ebling’s most important accomplishments came more than a decade ago, when a proposed ethanol plant in Bridgewater Township was under consideration. Ebling ensured that the concerns of residents were heard, and the project was ultimately shelved.

As the supervisor responsible for overseeing road maintenance, Ebling also helped Bridgewater Township’s road system to become among the county’s best, even though road maintenance takes up a relatively small portion of its budget compared to other area townships.

As the township continued to grow, Ebling became very active in ongoing debates regarding how best to serve its residents. He backed the initiative that made Bridgewater the first township in Rice County to increase its number of supervisors to five.

The township is also one of a limited number of Minnesota townships to have its own zoning responsibilities. Bridgewater Zoning Administrator Jim Braun said he was “in shock” at the loss of one of his closest friends and colleagues.

“We would talk back and forth probably three, four or even fice times a day,” he said. “I don’t know what’s going to happen now.”

While Ebling supported efforts to boost the township’s powers and responsibilities, Braun said that Ebling’s ultimate wish was to see Bridgewater incorporated as its own city. That idea has been discussed, but the township moved away from it after facing significant pressure.

In addition to empowering the municipality’s residents, incorporation could prevent further annexations by Northfield or Dundas. Both cities have eyed land closer to I-35 for potential business development, and were staunchly opposed to the township’s potential incorporation.

“If I can do anything to help Bridgewater become a city, I‘m going to do it, because that’s what he wanted,” Braun said. “He thought it was just the thing Bridgewater needed.”