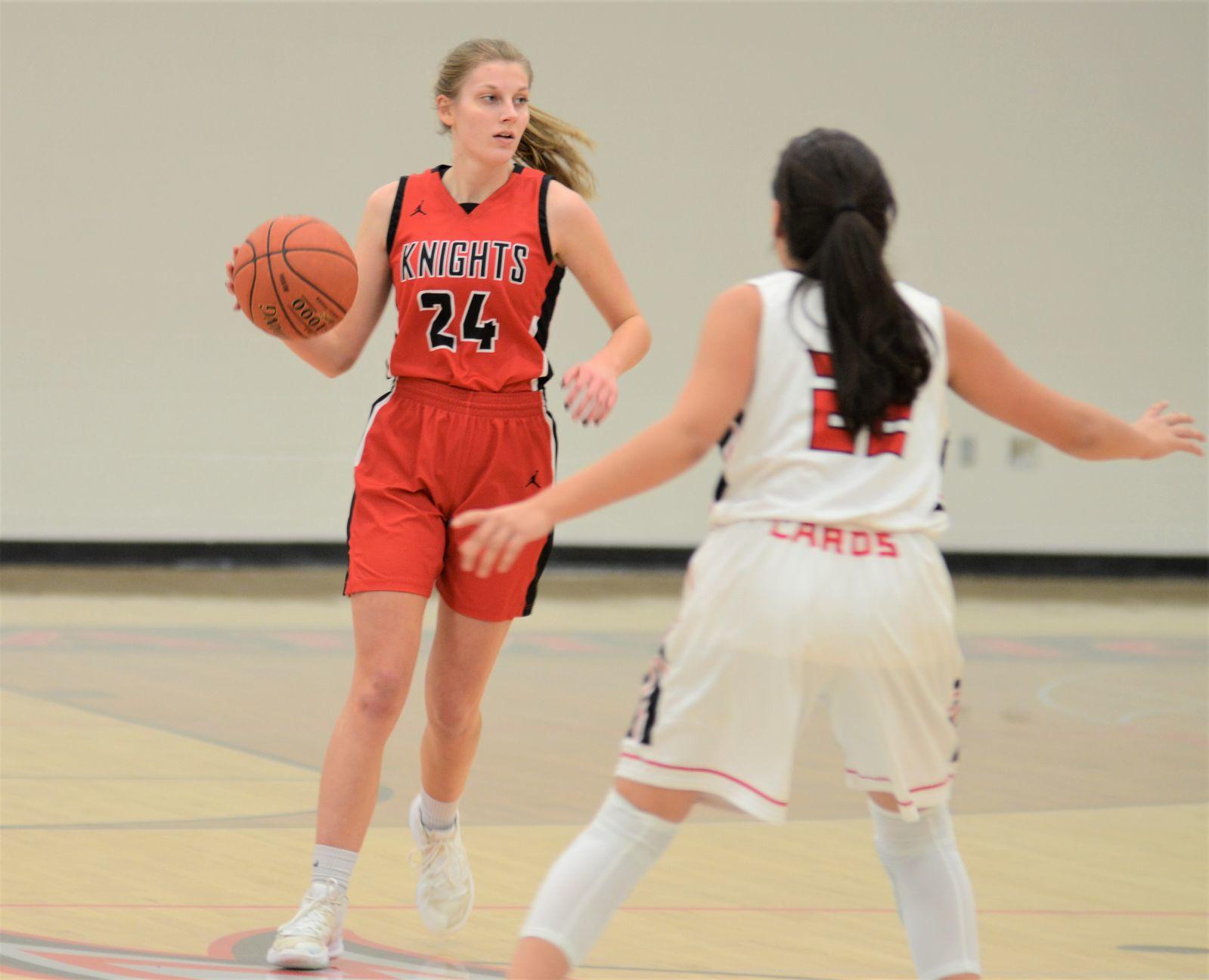 Julianna Boyum assesses the LeRoy-Ostrander defense during the second half of the K-W girls basketball game on Monday. The Knights held the Cardinals to just 11 points in the first half and cruised to a 62-32 win. (Jason Hommes/The Kenyon Leader)

Pipeline giant Enbridge is suing 13 Minnesota counties, saying they are owed money because the state overvalued Enbridge-owned land. Although Rice County isn’t among those counties, local government entities across the county were forced to pay nearly $1 million back to industrial taxpayers. (Forum News Service file photo)

Local government budgets have taken a major hit due to the state’s propensity to overvalue industrial properties, a trend that stretches back nearly a decade.

That’s according to the latest tax abatement report from Rice County Property Tax & Elections Director Denise Anderson. Across the county, refunds on overvalued properties cost local government agencies nearly $1 million dollars. Of that, $275,000 in county taxes was clawed back by affected property owners.

Just over a quarter of those re-evaluations have cost the county money, while local school districts and municipalities have been hit hard. The reassessments also affect the Rice County’s Housing and Redevelopment Authority, which is funded by its own separate tax.

Tax court judges are now regularly ordering tax refunds stretching back nearly a decade, putting years of revenues at risk. The re-evaluation makes changes in more recent evaluations likely, and each year of reassessment adds a 4% interest charge. In 2019, that amounted to $70,000 coming out of county reserves.

“Nobody knows exactly why this is happening,” Anderson said. “The state needs to figure out why they’ve been valuing it so high.”

At this point, Rice County’s hit has been small enough, and its fiscal management historically prudent enough, that it has been able to cover the funds through reserves, according to County Finance Director Paula O’Connell.

Still, the tax re-evaluations are likely to have reverberations into the future, forcing levy increases and/or limiting the amount of money the county has available to invest in economic development, infrastructure and the like. Furthermore, it’s no guarantee that the county won’t be taking a big hit next year through the tax abatement process, and perhaps into the foreseeable future. Anderson said many of the biggest tax cases the county faces cases remain incomplete.

However, not all local government entities have been so lucky. Some counties — and townships — have seen their entire operating budgets wiped out by the re-assessments, forcing them to dramatically raise their levies in the upcoming year.

Among the most worried are administrators in 13 northern Minnesota counties which have been sued by pipeline giant Enbridge. The case, which is currently being heard before the Minnesota Supreme Court, threatens to cost local governments millions, potentially necessitating state aid.

In response, local government officials have asked St. Paul to take a look at its tax valuation formula. The Association of Minnesota Counties has lobbied the legislature hard, saying that the current system is making life extremely difficult for local governments.

“We want to make sure property taxpayers aren’t left on the hook, and that assessments are reliable and dependable,” said Matt Hilgart, government relations manager for the League of Minnesota Cities. “Right now, folks don’t know what they can rely on in terms of revenue.”

For her part, Anderson speculated that an entire restructuring of the tax system, such as taxing production or use rather than land value, might provide the clearest alternative.

“This is manageable, but it needs to be fixed,” she said.

The Lions Club Super Bowl Sunday Pancake Breakfast is a Faribault tradition. The 54th annual breakfast will be held Sunday, and Infants Remembered in Silence will hold its own Pancake Breakfast a week later. (Daily News File Photo)

There’s no better time than the middle of winter for some tasty pancakes, hot coffee and good conversation. A pair of community events will give hungry residents the chance to enjoy just that while helping a good cause.

First is Sunday, when the Faribault Lions will host its annual Super Bowl Pancake Breakfast. In its 54th year, the breakfast is a Faribault tradition that just happened to get its start on the same day as America’s most iconic sporting event.

“Back when the day was first picked the championship game was not a big deal,” said Debra Wasserman, one of the Lions organizing the event. “Over the years, the two things grew together.”

Today the Lions serve more than 1,000 people each year at the breakfast, which makes it the group’s largest fundraiser of the year. Faribault Lions President Shermayne Cross said that all proceeds raised will be devoted to the Lions’s charity programs.

“The community has always been so supportive of us Lions,” she said.

The local Lions have a wide reach, ensuring that there’s plenty of local projects for those dollars to support. Lions provide dictionaries for third graders, donates to the Academy for the Blind, and supports children in need at the Faribault Public Schools, among other things.

At the breakfast, used eyeglasses and hearing aids will be collected as per Lions tradition, and free vision screening will be available for children between 6 months and 6 years of age. Cross said it’s the third year that the vision screening has been available at the event.

Cross said that once again, the pancakes will be made from the secret recipe that’s been passed through her family. For more than 30 years, avid pancake eaters have tried to guess the exact formula, to little avail.

“We’ve had lots of fun with the secret recipe,” she said.

A week later, Infants Remembered in Silence will hold a pancake breakfast of its own. It’s the second largest fundraiser of the year for the Faribault-based charity, which supports women and families struggling to cope with the loss of a child during or shortly after pregnancy.

IRIS was founded in 1987 by local mother Diana Kelley, two years after her son was stillborn. As the organization quickly grew its need for financial resources did also, and the pancake breakfast started a decade later.

In the years since, the breakfast has become a tradition, though it’s gone through plenty of changes. The pancake breakfast now stretches into the afternoon, with bingo, a silent auction and a bake sale.

Funds raised from the event will help IRIS’s army of more than 300 volunteers to support those going through the bereavement process, enabling the organization to provide items such as burial clothes, blankets and bereavement packets.

Donations will also help IRIS’s efforts to increase awareness of infant loss. Each year, the nonprofit works to bring attention to the issue by seeking proclamations from local cities and encouraging buildings to participate in its lighting campaigns.

The Faribault Lions Club will hold its 54th annual Super Bowl Sunday Pancake Breakfast on Feb. 2. The event will be held from 7:30 a.m. to 12:30 p.m. at the Faribault Eagles Club, located at 2027 Grant St.

Tickets are $7 for adults, $4 for children under 12 for all you can eat pancakes. Tickets can be purchased at the door or in advance at Fareway, HyVee and the State Bank of Faribault.

The 23rd Annual IRIS Pancake Breakfast and Bingo Bash will be held on Feb. 9 at the Faribault American Legion, which is located at 112 5th St NE.

Tickets are $8 a person and can be purchased at the door. Bingo is $1 for each game played.

IRIS is looking for volunteers to help put on the event. Interested persons can call (507) 334-4748 or send an email to support@irisRemembers.com. 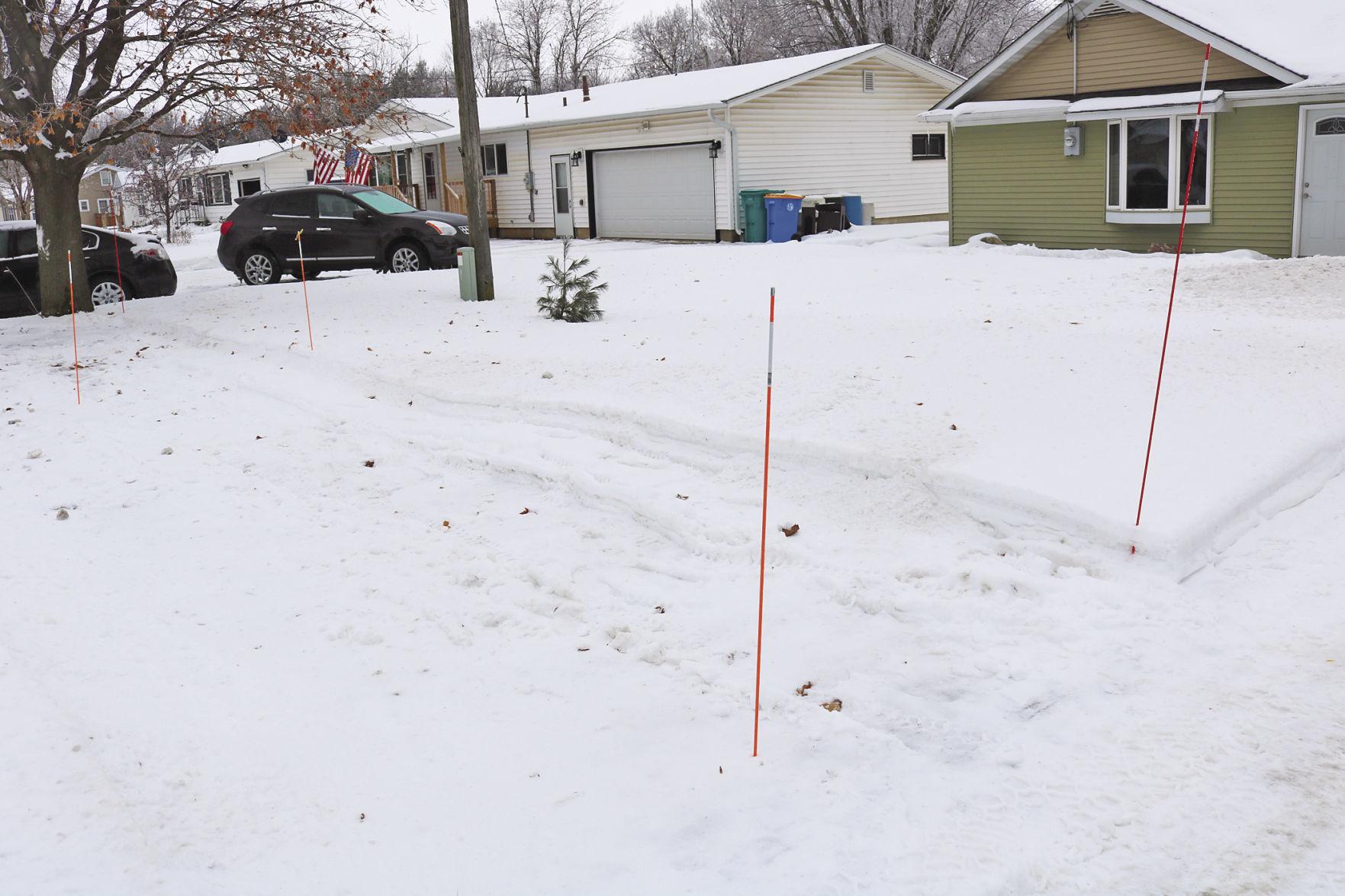 Main Street resident and former Medford city council member Chad Merritt snow plowed and marked the portion of his yard that he would potentially lose if the city council adopts a street design that would include an eight-foot boulevard and six-foot walkway along both sides of the roadway. Merritt was one of roughly 30 individuals who voiced their aversion to adding a sidewalk along the residential portions of Main Street during a workshop session and city council meeting Monday night. (Annie Granlund/People’s Press)

The Faribault School Board appointed a new member, but his prior experience on the board is nothing new.

At its Monday meeting, the board approved a resolution to appoint Jerry Robicheau as the newest member of the Faribault School Board. The motion passed 5-0. Chair Chad Wolff was absent, Board member John Bellingham acted as chair.

After reviewing the candidates’ applications, Board members Courtney Cavellier and Bellingham recommended the board appoint Robicheau. Cavellier offered the reasons that Robicheau’s prior experience on the School Board is appropriate for the timing of the vacancy, and the community not only elected him but re-elected him to the School Board in the past. His previous work on the board’s facilities committee added to his favored experience.

Cavellier said she was impressed with the other five applicants and hopes each one considers running for election later this year. When Robicheau’s term ends in November, he may also choose to run for a full four-year term.

“I do really sincerely hope the other five stay engaged in the district,” said Cavellier.

Bellingham, who delivered the news of Robicheau’s appointment to each candidate, said he had good conversations with each applicant. Many asked how they could help the district, if not as a board member.

Board member Jason Engbrecht, who is serving his final term on the board, said he was thrilled with the candidates who applied and would have happily appointed a number of them. Engbrecht joined the board the same time as Robicheau did originally, and he said he “wholeheartedly endorses” his appointment.

Robicheau said in his application he didn’t run for a third term after his second term expired because he felt it important for other community members to have a voice.

“While on the board my decisions were always based on and the focus was on how this decision will improve the education and learning of our students,” Robicheau wrote in his application. “ … Because of my previous experience and my professional background … I will again bring that student focus/decision making to the school board.”

Robicheau bid the School Board farewell the end of 2016, after serving as chair for two years and vice chair for one. He served on the board’s negotiations team, and the Policy and Facilities committees.

Within the Faribault School District, Robicheau has over 13 years of experience in administrative positions such as director of special education, elementary principal and assistant superintendent. He’s also served as superintendent of schools in other Minnesota districts, such as Inver Grove Heights and Thief River Falls.

Robicheau’s experience in education extends beyond secondary schools to the collegiate level. He currently serves as a professor in the College of Education at Concordia University, St. Paul. He was also appointed a professor emerita at Minnesota State University, Mankato and a professor of pedagogy at Nord University Bodo, Norway.

Per state statute, Robicheau must wait 30 days before officially voting as a member of the School Board.