Summer STEAM is back in person for students in grades preK through eight. This group of 8-year-olds gathered for a photo outside Jefferson Elementary the second week of camps. They include Jatziri Martinez Contreras, second from left, Alexa Flores and Danika Ben. (Misty Schwab/southernminn.com)

It’s been one week since Summer STEAM relaunched at Jefferson Elementary, enough time for 8-year-olds Aria Srey and Aubrii VanErp to decide the best part of the day is “lunch, recess and breakfast.”

Srey said she likes the dino camp, where she played with kinetic sand (sand coated with silicone oil that allows it to stick together) on Monday. VanErp added she got to play with water balloons in the camp she attended. 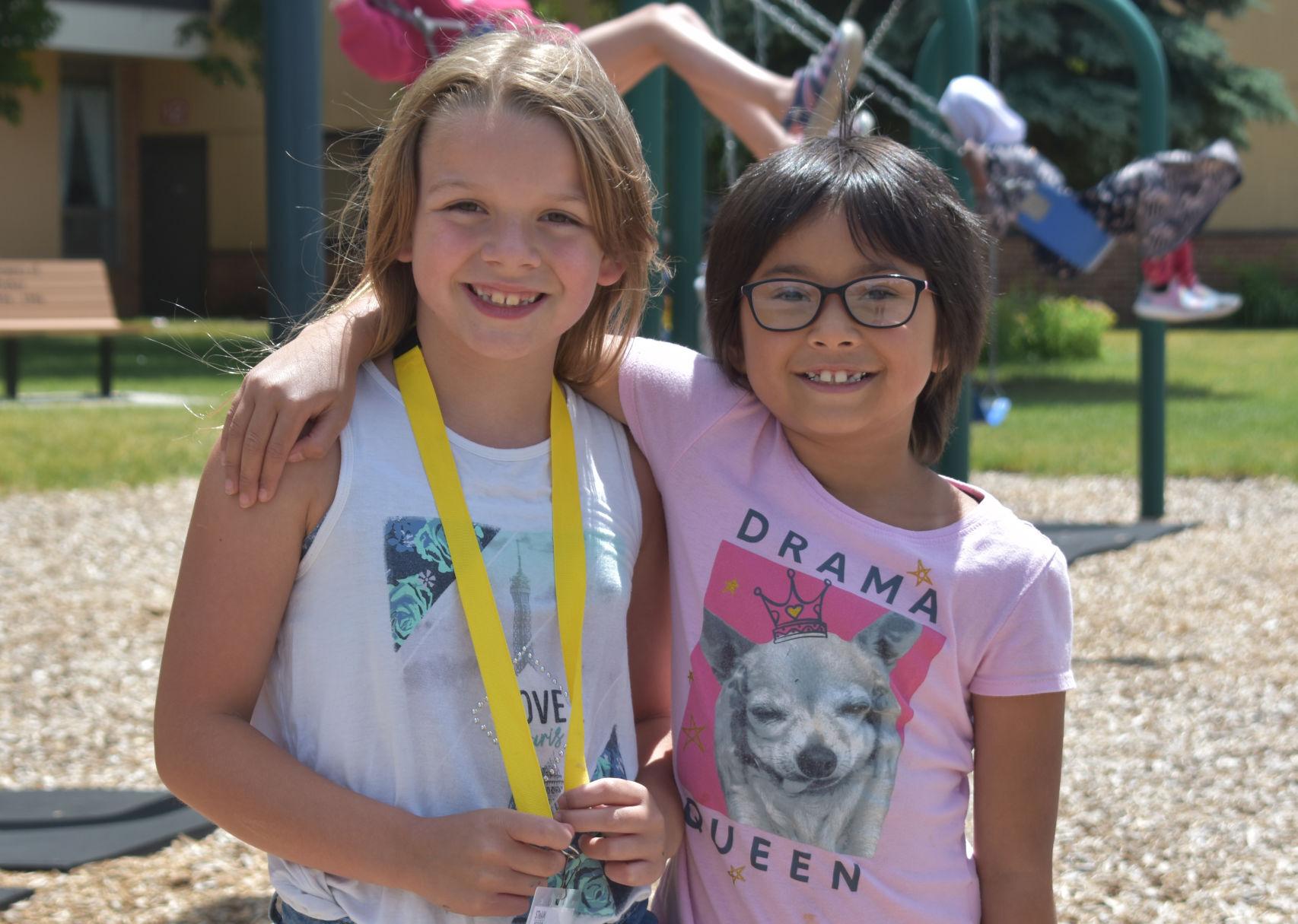 Aubrii VanErp, left, and Aria Srey, both 8, hopped off the swings during Summer STEAM recess to pose for a photo. (Misty Schwab/southernminn.com) 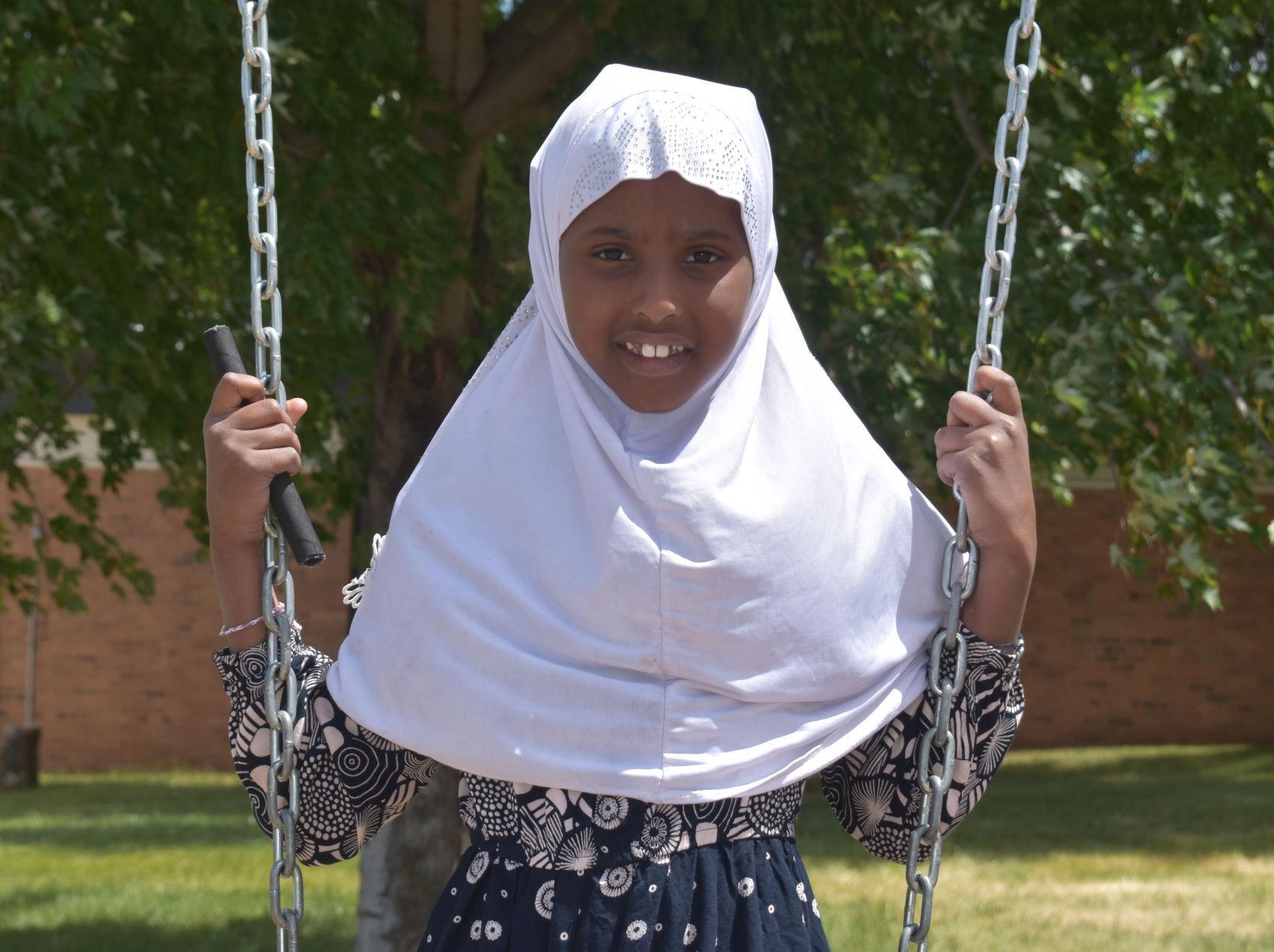 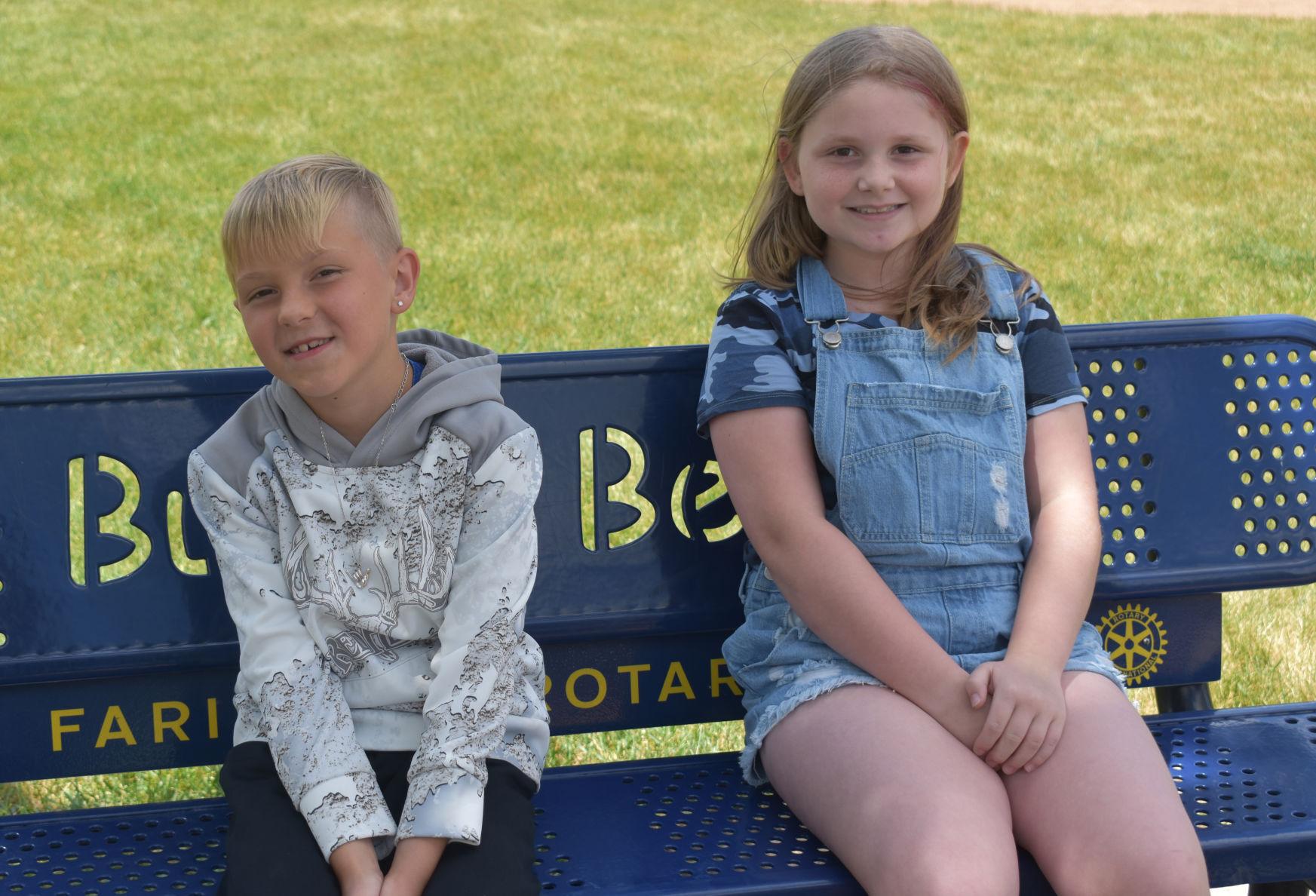 Added Kyndal Keilen, 8: “I like the Helping Hands [camp]. I think it’s really cool. You can do arts and crafts there.”

Rilynn Gregoire, 6, said, “My favorite part of coming here is seeing my friends.” 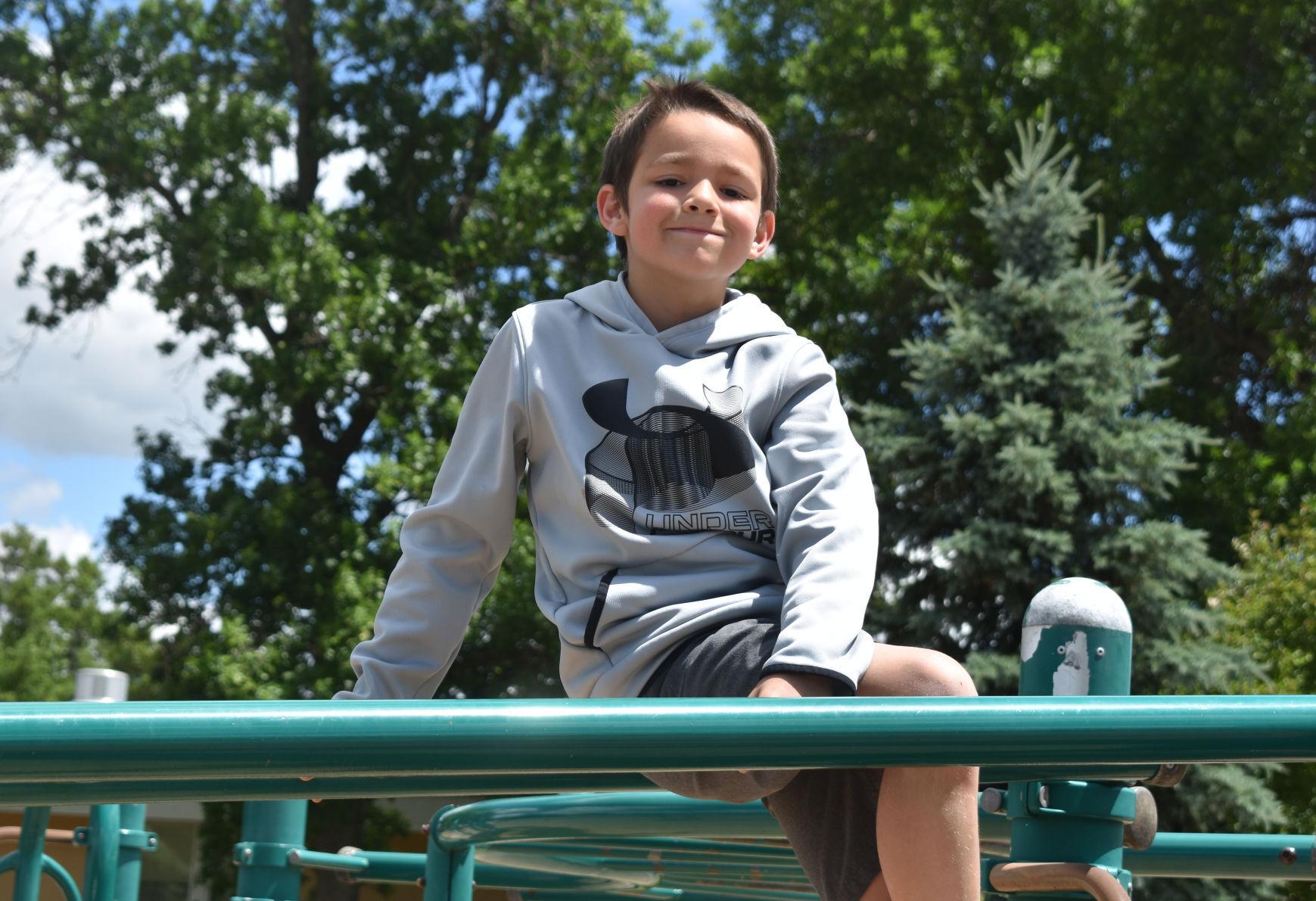 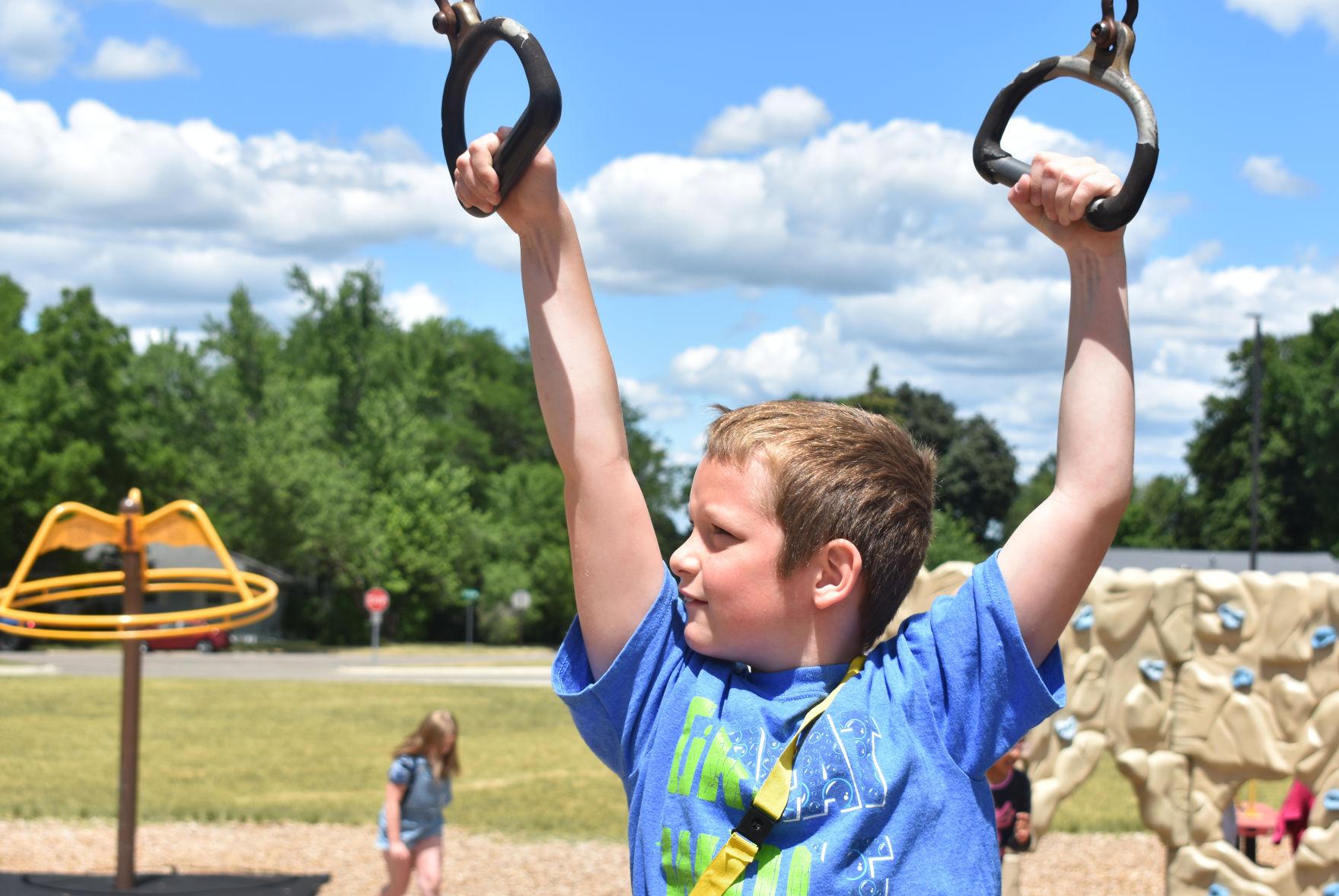 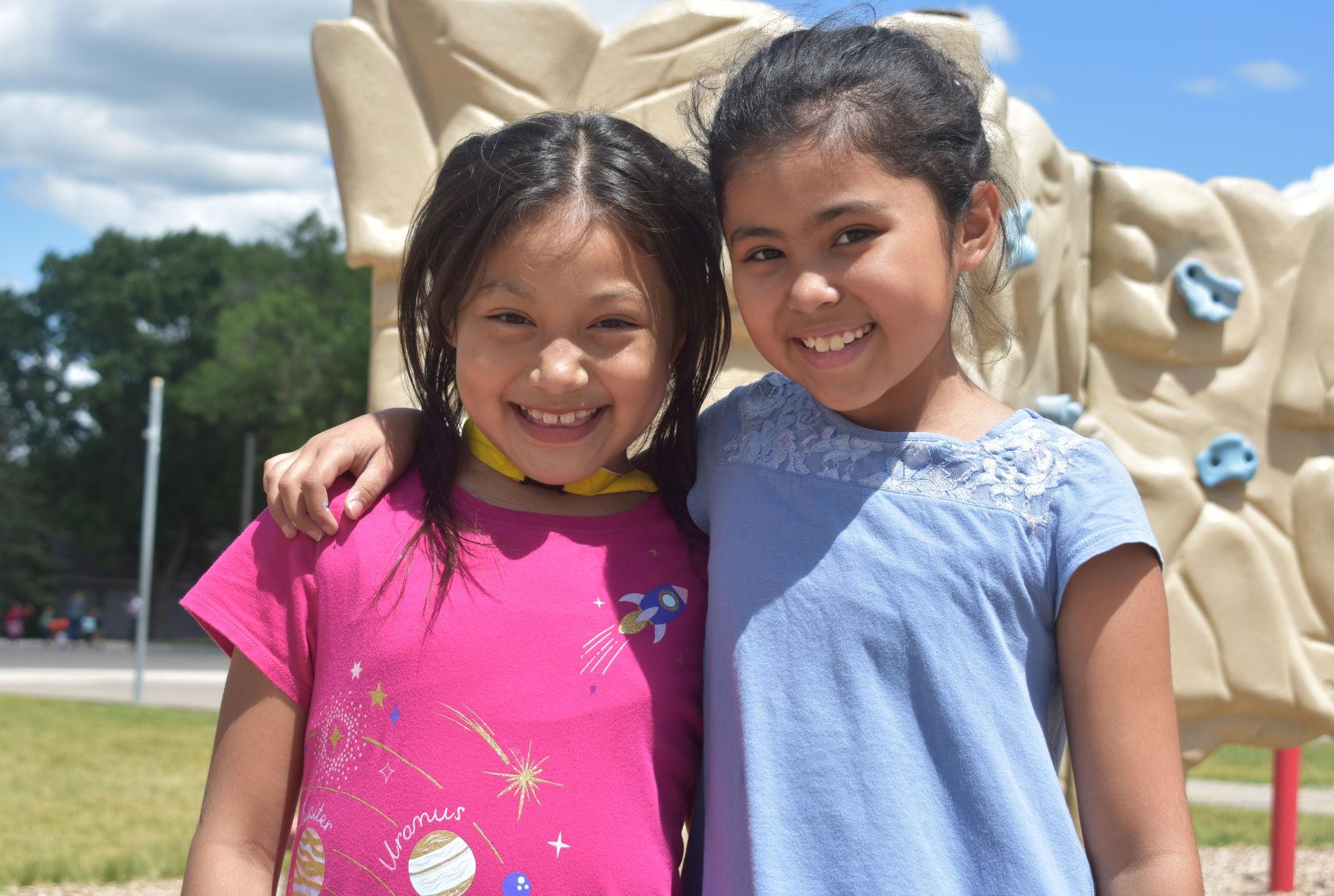 Jatziri Martinez Contreras, left, and Yaretzi Cisneros, both 8, posed for a picture during Summer STEAM on the Jefferson Elementary playground. (Misty Schwab/southernminn.com)

“This year is the biggest it’s ever been, and it’s getting more inclusive every year by involving preK and SPED (special education),” said Taylor Wertish, Summer STEAM coordinator. 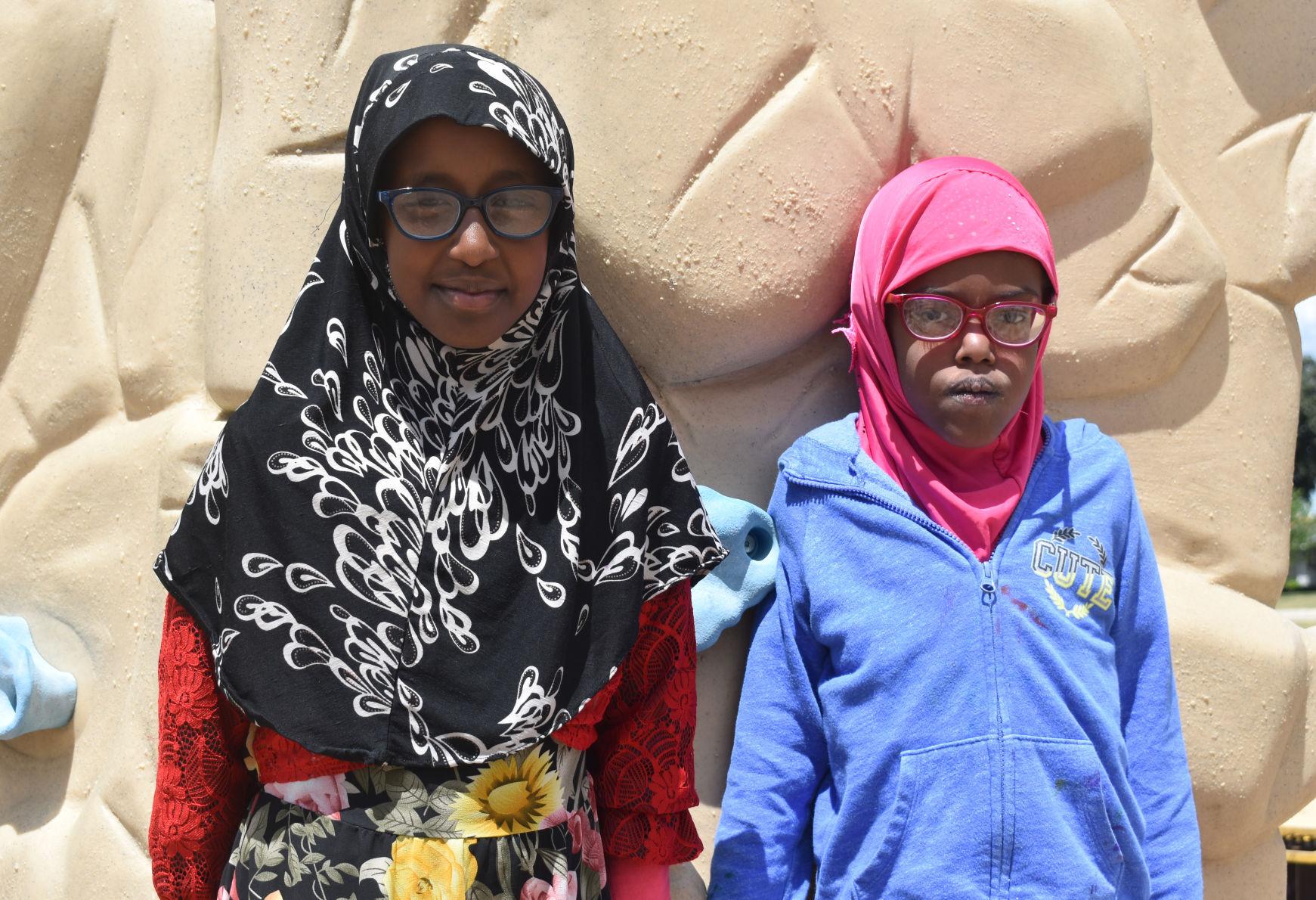 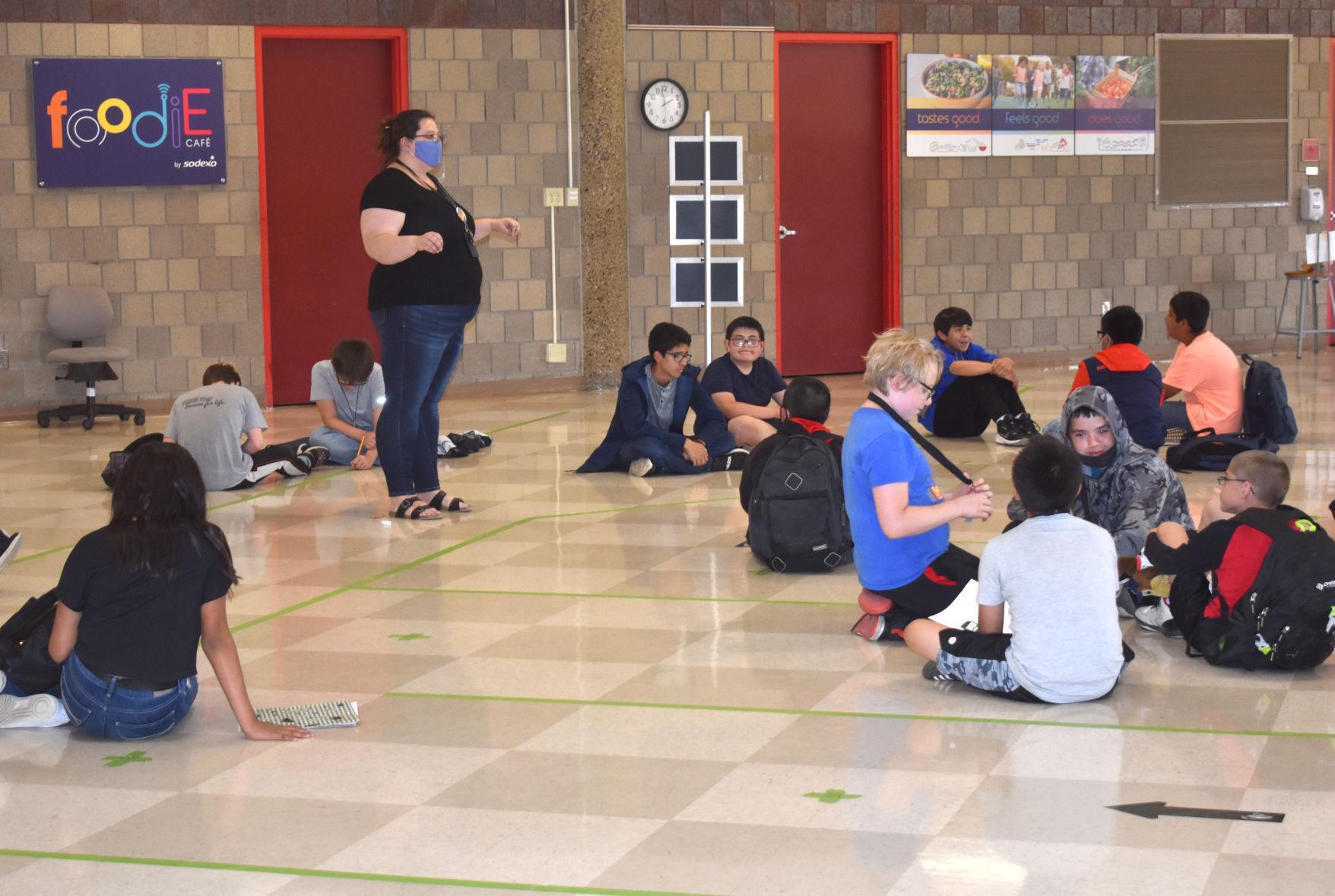 At Faribault Middle School, students gathered in the cafeteria Monday for a calming session during Summer STEAM. (Misty Schwab/southernminn.com)

PreK students, or those who are at least 4 years old, and students receiving special education were invited to join Summer STEAM for the first time this year. Summer STEAM also has two liaisons, who communicate with families who speak either Spanish or Somali as a first language.

Monday through Thursday, students meet at either Jefferson Elementary or Faribault Middle School, depending on their age, and participate in learning activities as well as fun hands-on projects and crafts. 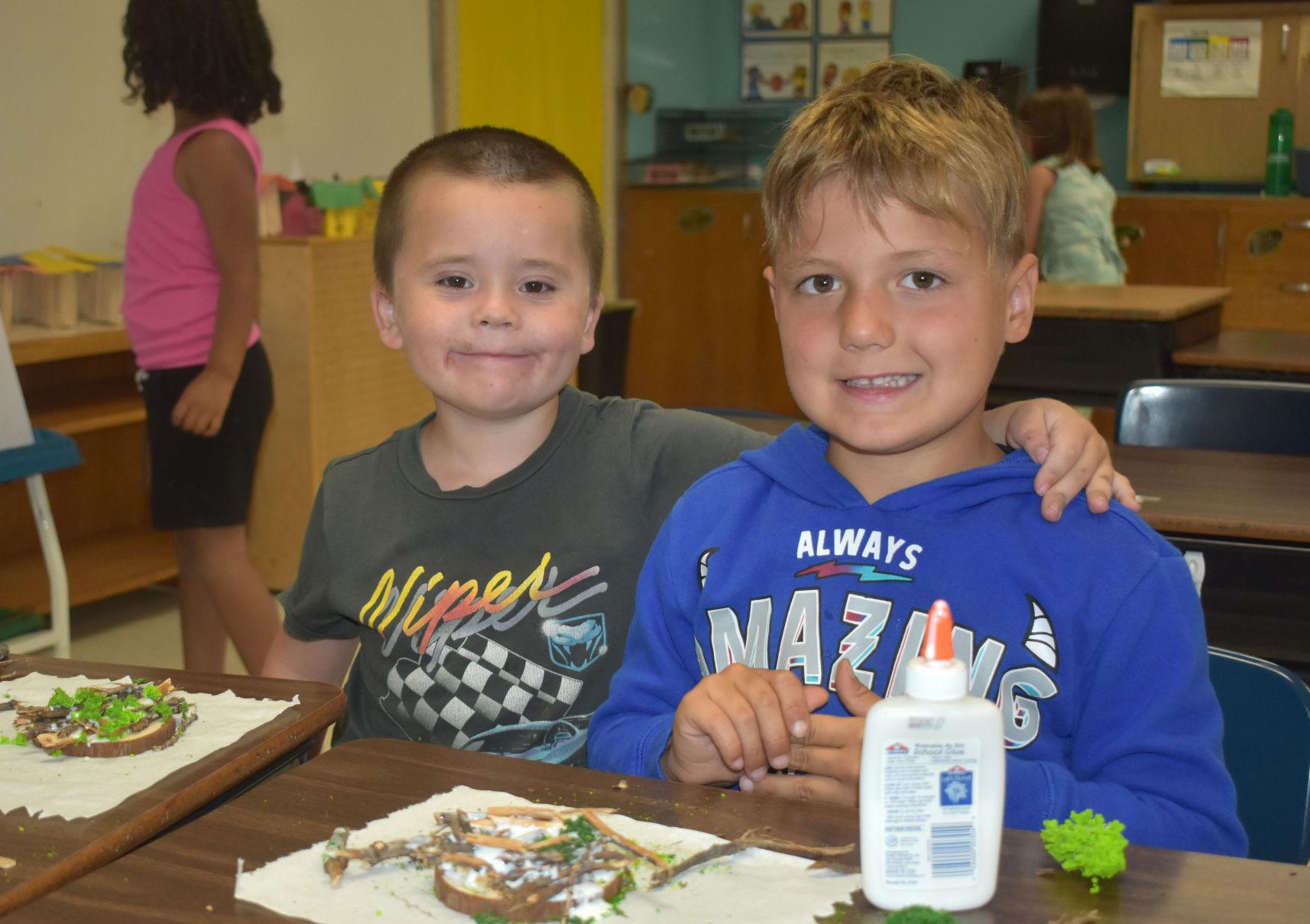 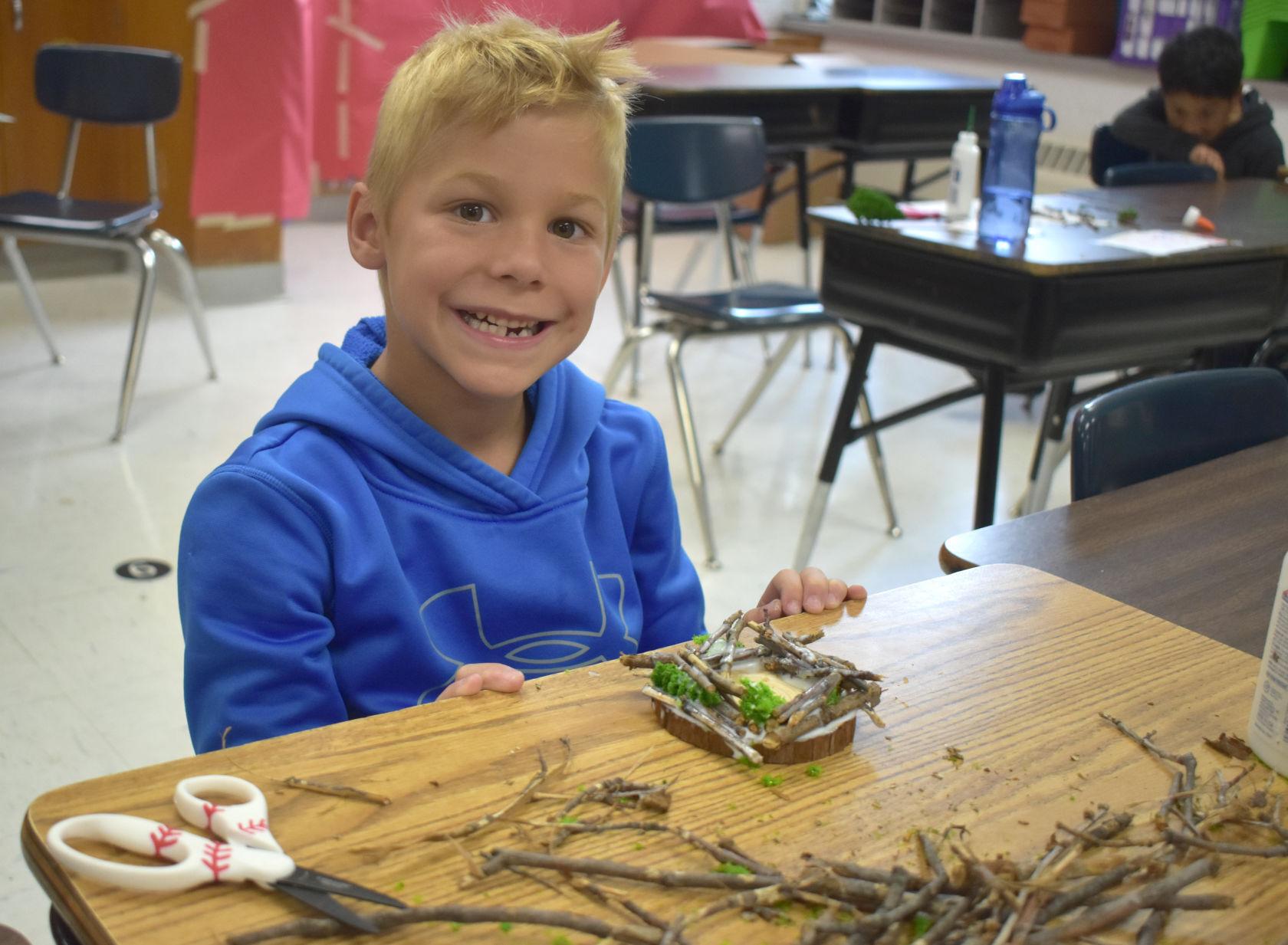 Summer STEAM teachers developed themes for their afternoon sessions, which last three weeks each. During these camps at Jefferson, students may choose to learn about photography and scrapbooking, conduct backyard experiments, engage in a community service project or learn about a topic like camping, animals or dinosaurs. These camps are offered to each grade level except for preK. Those students stay in one class throughout the day.

At Faribault Middle School, camps focus on topics like simple machines, nature, outer space, board games, friendship, filmmaking, photography and scrapbooking. This week, 74 students will board a bus to go to a Twins game through Summer STEAM.

“Cabin Time” is an opportunity for students to wind down by reading a book or doing something else to relax. For the first time in a year and a half, students can check out books in person at the media center. During the pandemic, students checked out books online.

The media center also serves as a “maker space” where students create projects with Legos, K’Nex, and other tools for exercising their imaginations. Jefferson media specialist Chris Paschke will continue lessons on concepts like stop motion animation, coding and using a green screen with video-making as part of the students’ library time during the school year.

“It’s pretty much a continuation of the school year, and for preK students it may be their first time in a classroom,” Wertish said. “It’s good for them to get that exposure.”

Typically offered for students up to eighth grade, Summer STEAM will include offerings specifically for high school students going into 9th through 12th grades. Six short-term summer classes take place in either July or August, depending on the course. Classes emphasize topics like going into high school, preparation for college-level classes, physical fitness, Faribault’s history, landscape design, and scoreboard management and digital design.

Eligible students received a form to return one week prior to the start of class or sooner. Forms can be returned to the school office or sent to Erin Losinski at elosinski@faribault.k12.mn.us.