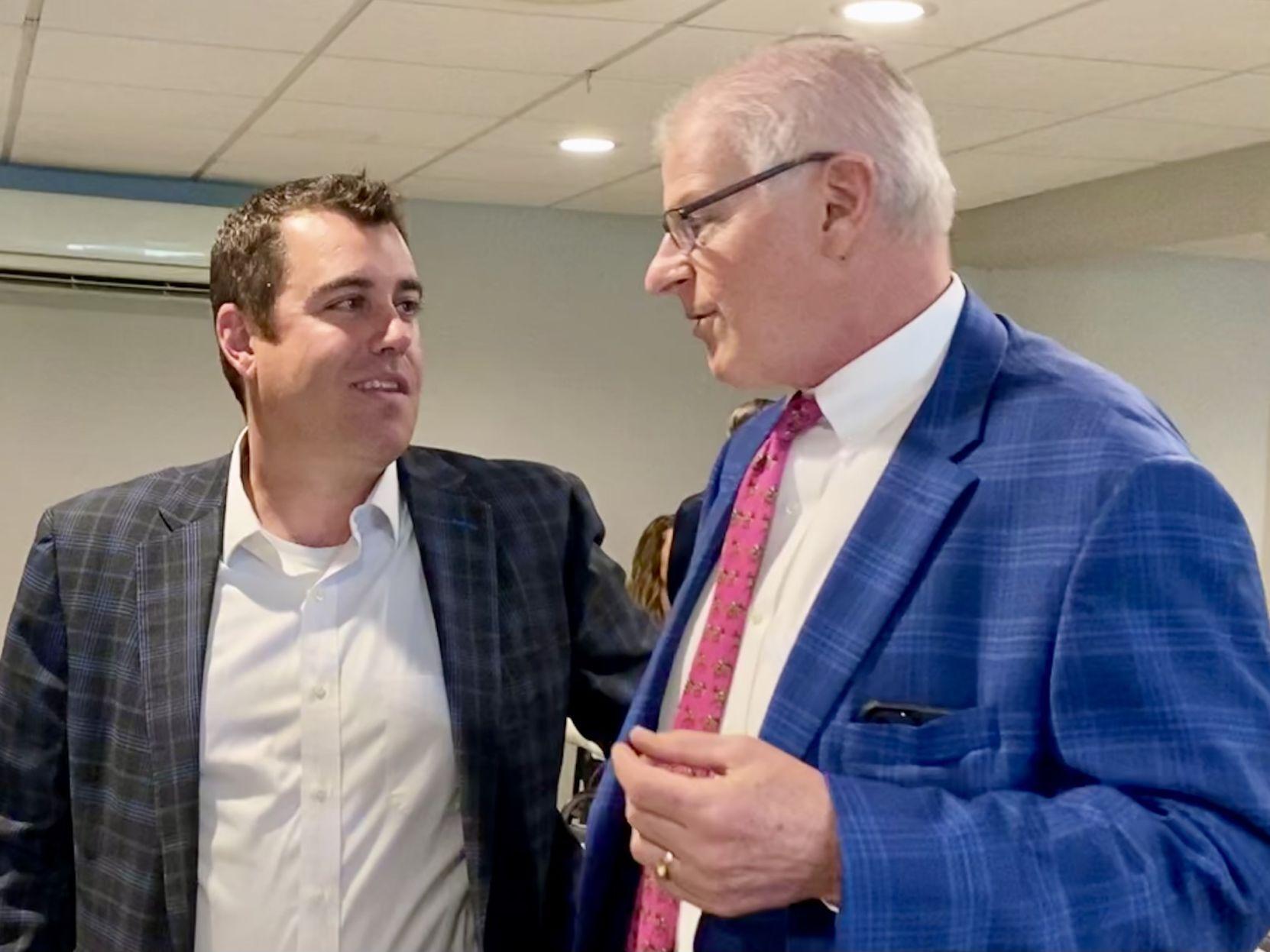 Reliance Bank President Todd Markman, right, congratulates Trystar CEO AJ Smith after the manufacturer was named the Faribault Area Chamber of Commerce Business of the Year Thursday. Reliance Bank and Fitness in Motion were also nominated for the honor, which was revealed during the annual Business Awards luncheon. More on the award and photos from the event in tomorrow’s edition. (Suzanne Rook/Faribault Daily News)

What appears to be a pair of tornadoes appear in the sky west of Fleet Farm in Owatonna shortly before 8 p.m. Wednesday. (Photo courtesy of Matt Knudson)

At least eight tornadoes touched down as a storm moved from Owatonna north to the south metro suburbs Wednesday night.

As of Thursday afternoon, eight tornadoes have been reported to the National Weather Service. The tornadoes touched down in Rice, Scott and Steele counties, as well as a tornado touching down near Henderson north of Mankato, according to the Weather Service.

No injuries or fatalities were reported, according to the Weather Service.

Mike Johnson, Owatonna fire chief and emergency management director, said no structures were damaged and the tornadoes touched down in farm fields. No weather-related issues or damage was reported in Rice County, according to Sheriff Troy Dunn on Wednesday.

Johnson recommends that residents have a NOAA weather radio to hear warnings inside their home because Steele County’s sirens are only located in the cities and residents in rural areas may not hear a siren.

At 7:25 p.m., the NWS reported a law enforcement-confirmed tornado was located 7 miles northwest of Owatonna. The storm then headed northeast, skirting Faribault and heading toward Lakeville, Burnsville and Apple Valley shortly before 9 p.m.

“What happened last night is we had a cell come into Steele County that produced two funnel clouds,” Johnson said. “The storm originated in Meriden Township and the sirens on the north side of Steele County were activated. Spotters continued to track the storm into Deerfield Township in the northwest corner of the county.”

The tornadoes touched down for a short period of time in Steele County before going back up and then the storm headed into Rice County, where several tornadoes were reported, according to Johnson said.

As of Thursday, there are only reports of tree damage and nothing substantial appeared to have been hit, according to Weather Service meteorologist Chris O’Brien. He added that it was mostly over farmland.

While the tornadoes are not likely to be rated very high on the EF-scale, O’Brien says official ratings are not made until damage is surveyed, as the rating is determined by the damage. The Weather Service is still gathering information about the storm and has not yet conducted any surveys as of Thursday afternoon.

Tornado touchdowns were reported in the small area between the southern Minneapolis metro area down to about the Iowa border. Most of the tornadoes touched down around Owatonna headed north from there into Rice County.

“Basically it looked like the main threat kind of went up, almost up I-35, and then it kind of dissipated just as it was getting into Dakota and Scott counties, along the county lines,” O’Brien said.

It is currently unknown the distance traveled by the tornadoes, as more information is being collected. Based on video footage some tornadoes appeared to be traveling, while reports from area storm spotters noted brief and sporadic touchdowns of tornadoes, O’Brien said.

“It wasn’t expected to be a big tornado day, so we were a little surprised there,” said O’Brien.

There was just enough low level spin to support several small tornadoes, O’Brien said of the unexpected outbreak. The tornadoes did not look like much on radar, he added, as you would normally expect a lot of lightning and hail. While Wednesday night’s storm produced heavy rains, there was not any recorded lightning, which O’Brien found unusual.

Johnson said a lot of people were out looking at the storm, which caused problems with a large amount of vehicles trying to chase the storm.

“That created some traffic problems and hazards because there is no guarantee another funnel won’t pop up in that same area or nearby,” Johnson said. “We try to encourage people to keep a safe distance away from storms.”

Kira Bock took this video Wednesday night. She said her camera was pointed north and that it appeared as if the twister was about a mile north…