Minnesota Department of Transportation officials are planning to resurface about 8 miles of Hwy. 21 from about 1 mile west of I-35 west to Hwy. 99 in 2021. The road has narrow shoulders and skirts Shields and Mazaska lakes, making the project, which won’t employ a detour, slightly more challenging. (Suzanne Rook/southernminn.com)

Except for the upheaval at Jefferson Parkway and Hwy. 246 in Northfield, and some minor road repairs, the 2020 construction season has been pretty quiet in Rice County. That’s about the change.

The Minnesota Department of Transportation has several big projects planned for the next 20 years, including two roundabouts and repaving the county’s most well-traveled highways. And while nothing’s certain until shovels hit the ground, MnDOT’s plans seemed pretty firm.

During its Oct. 16 meeting, Rice County commissioners heard from MnDOT District 6 Planning Director Heather Lukes, who reviewed the department’s plans for the entire district with a focus on the 2021-30 plan for Rice County.

The biggest of all is the anticipated six-leg roundabout at the Interstate 35/Hwy. 19 interchange between Lonsdale and Northfield. Commissioners last month agreed to spend $33,000 to help pay for a study of the area, looking at soils, geography and more to ensure a proposed six-leg roundabout will work as envisioned and move traffic safely and efficiently. Since MnDOT hasn’t allocated funds other than $67,000 for the upcoming study, there’s no date associated with the $3 million project.

Any groundbreaking is dependent on funding, largely from grants from MnDOT and the state Department of Employment and Economic Development.

Next year, Shieldsville residents will see more than their fair share of orange cones as MnDOT begins its $3.9 million Hwy. 21 project to resurface about 8 miles from about 1 mile west of I-35 west to Hwy. 99. New turn and bypass lanes will be installed at Shields Court, Mazaska Lake Trail, Lake Mazaska Boat Launch and French Lake Trail. Additionally, the Rice County Road 62/Halstad Avenue intersection will be improved and overhead lighting will be added to improve safety.

Because there’s so little shoulder on much of that portion of road and no paved roads to use as detours, traffic will continue to move through the section while work is being done. Bids are expected to be let later this month.

According to MnDOT’s current plan, work slows again until 2023. That’s when it expects to resurface all four lanes of I-35 from County Road 48 to Hwy. 21 and contribute funding to Faribault first roundabout at Hwy. 3 and 30th Street NW.

The roundabout project, led by the city of Faribault, is designed to simplify a difficult intersection and prepare that section of the city for anticipated growth.

Work ramps up again in 2025, with the much anticipated resurfacing of Hwy. 19 from Hwy. 13 west of New Prague all the way to Hwy. 3 in Northfield. The project is separated into two parts, split at I-35.

County Engineer Dennis Luebbe has said discussions about the Garrett/Decker/Hwy. 19 intersection just south of Northfield Hospital are ongoing. MnDOT’s Lukes last week suggested a traffic signal at the site might be the solution. Bridgewater Township has long looked to upgrade the intersection, considered difficult with its offset north/south legs.

In October 2010, Northfield city staff proposed a roundabout at the intersection and suggested applying for grants to pay for some of the work. But the City Council couldn’t get on board and nixed that plan and the following year one for a proposed business park on nearby land that had been recently annexed into the city.

ALSO IN THE PLAN

• Repave Hwy. 3 from Faribault to the Rice/Dakota County line

With harvest season here, farmers are celebrating a strong growing season and improving markets. (Photo by Kelly Sikkema on Unsplash)

After several difficult years, area farmers say their hopes for a strong harvest and relatively strong markets are finally coming true in 2020.

A light frost last weekend did little to disrupt harvest season. According to the Crop Progress report released last week, more than 60% of soybeans had been harvested, compared to a five year average around 40%.

Unseasonably warm weather this week has made for ideal harvesting weather, said Steele County farmer Dan Deml. Roughly 80% of beans were rated by farmers as “good” or “excellent,” and Deml anticipates that farmers got most of them out by the end of the weekend.

“It’s been an excellent week for soybean combines, with warmth and some dry breezes,” he said.

When it comes to the market side of the equation, things aren’t ideal. Stronger than expected purchasing from China, once the U.S.’s primary soy buyer, has boosted prices up by a dollar or more, said local soybean farmer Keith Schrader.

“It’s been a real good feeling to have prices come up,” Schrader said.

USDA estimates of a bumper crop nationwide were trimmed a bit by drought in some places, along with a vicious derecho that hit Iowa, causing hundreds of millions of dollars worth of damage. That’s helped to keep oversupply from driving down prices too much.

University of Minnesota Agriculture Extension Specialist Claire LaCanne’s reaction? A sense of relief. LaCanne contrasted this year’s harvest with last year’s, when just 10% of beans were harvested at this time and only 56% were in good or excellent condition.

“Yields are looking good and moisture levels are as well,” she said.

With the soybean harvest likely complete, Deml said local farmers are turning their attention to corn. Again, more than 80% of farmers have identified their corn crop as good or excellent, so as long as the weather remains cooperative, a strong local crop is on the way.

Schrader noted that at around $3.50 a bushel, corn prices are nearing the level where farmers are able to break even. While that still isn’t an ideal situation, he said it’s a notable improvement compared to what they were recently.

“We need just a little more (to make a profit), but about a month ago we were looking pretty sad,” he said.

Corn prices were driven down earlier this year due a dramatic reduction in ethanol production. Coupled with an ill-timed oil price war between Russia and Saudi Arabia, COVID-19 travel restrictions led to a large discrepancy between oil supply and demand.

Rice County Farmers Union President Steven Read noted that farmers struggling to break even on their crops are benefiting from the U.S. Department of Agriculture’s second round of Coronavirus Food Assistance Payments, known as CFAP.

In January, President Donald Trump took significant steps to end the trade war that had marked the first three years of his administration, signing off on the U.S.-Canada-Mexico Free Trade Agreement and a Phase One Trade Deal with China. The deal was of particular importance to local farmers due to China’s role in the soybean market. Supporters said it could increase America’s agricultural exports to $50 billion and its overall exports by $200 billion.

Before the deal was struck, China had shifted most of its purchases to Brazilian soybeans. While the Chinese have lived up to their commitment to increase purchases from the U.S. so far, Read said the market still hasn’t recovered to where it was.

Clawing back all of the market share lost by U.S. farmers during the trade war will be a tall order. Even trying to do so, Read said, would likely require even more steps to open up trade between the two countries.

“Until we change the trade situation with China, we’re not going to see a dramatic improvement,” he said.

Whether those changes are made, Read added, will likely be decided by whoever wins the Presidential election. In the meantime, though, farmers like Deml are glad to see at least some improvement in their fortunes.

“All in all we’re looking good,” Deml said. “I think people will end up very satisfied.”

Ruth’s House of Hope has six pillars holding up the third story, and RJ Dwyer Inc. recently set to work repairing the deteriorating structures. The project is expected to wrap up before the snow falls. (Misty Schwab/southernminn.com)

Ruth’s House of Hope is making a couple major changes to its structure — one that supports the building itself and the other that helps women recovering from substance use disorders.

RJ Dwyer recently began construction on the six pillars that hold up the third story of Ruth’s House, and at the same time, staff is planning to open an extension of the original shelter in Northfield called Sarah’s House.

For the past 16 years, Ruth’s House has offered a sturdy shelter to female heads of household and their children in crisis situations. The 24-hour support staff helps the women deal with the repercussions of domestic abuse, addiction or poverty, among other crises, and connects them with resources to get them back on their feet.

The actual house is much older than the organization and required crucial repairs to the pillars holding up the third floor, which contains three resident rooms and a play area for children. The third floor also includes a multi-century area, where children completed class work when schools closed in the spring.

Suzzanne Fox, executive director of Ruth’s House of Hope, said the coronavirus pandemic pushed back the start date of the project, but Dwyer expects to have the pillars repaired before the snow falls.

To fund the project, Ruth’s House staff needed to raise $40,000. The organization raised half of the target amount at its annual Hearts Gala Fundraiser in February. Local residents and businesses, who went by “Pillars of Our Community” donated $20,000 to match the funding raised at the gala.

Fox said Ruth’s House continues to plan for the 2021 Hearts Gala in February, but in a virtual format.

A new house of hope

Over the years, Ruth’s House has offered support to a number of females transitioning out of drug and alcohol rehabilitation centers. But staff recognized a need for a separate house to help these women transition back into society.

“We’ve found it’s better for women to have that space to themselves before being reunited with their children,” Fox said. “It’s difficult when you’re thrown back into society and thrown back into parenting all at once.”

To give women transitioning out of treatment an extra hand, the Ruth’s House Board and staff developed the concept of Sarah’s House, which will open later this month.

Residents will continue on the path of outpatient treatment and receive support in case management as well as resources to connect them with volunteer opportunities and other transitional programs. Fox said the location of the house is in Northfield, but to respect the privacy of residents, the full address won’t be disclosed publicly.

Ruth’s House staff members have been designated to serve at Sarah’s House once it opens this month. Fox anticipates residents’ stays to last an average of six months, similar to the Ruth’s House average. Up to five women may stay at the house at one time.

“It’s a wonderful opportunity and we can serve more women this way,” Fox said. “This is a time for them to rebuild their lives during in-between times. It’s definitely a need in the community for some place like this.”

Ruth's House of Hope recently received more good news in the form of a grant called Open Your Heart to the Hungry and Homeless. The grant funded new waterproof and bedbug-proof mattresses for all the Ruth's House residents.

According to Ruth's House Executive Director Suzzanne Fox, Ruth's House never before replaced its mattresses all at once, but it was a major need for the residents. 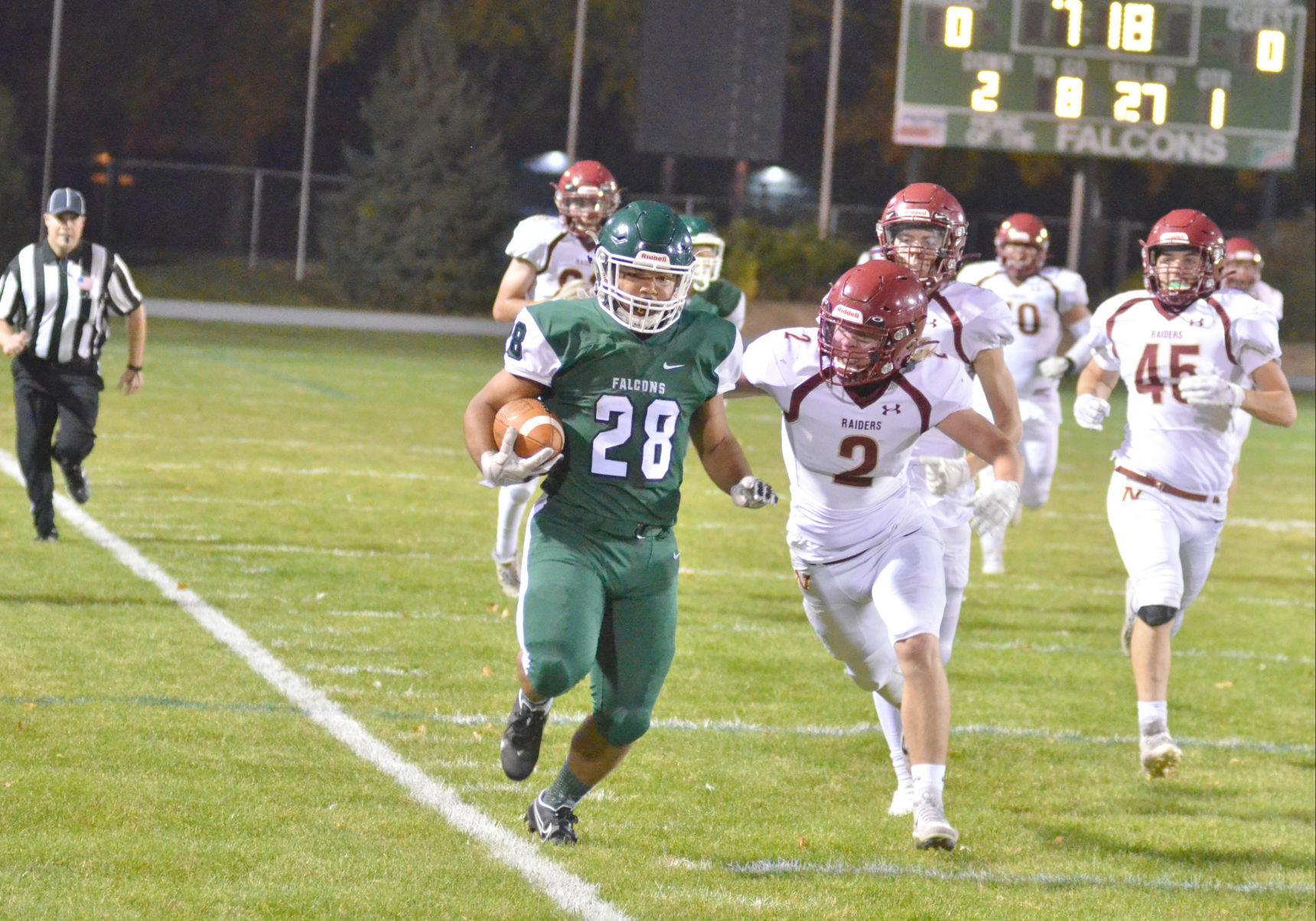 Faribault junior running back Elijah Hammonds motors down the sideline during Friday’s 30-28 overtime victory against Northfield at Bruce Smith Field. Hammonds rushed for 88 yards and a touchdown. (Michael Hughes/southerminn.com)