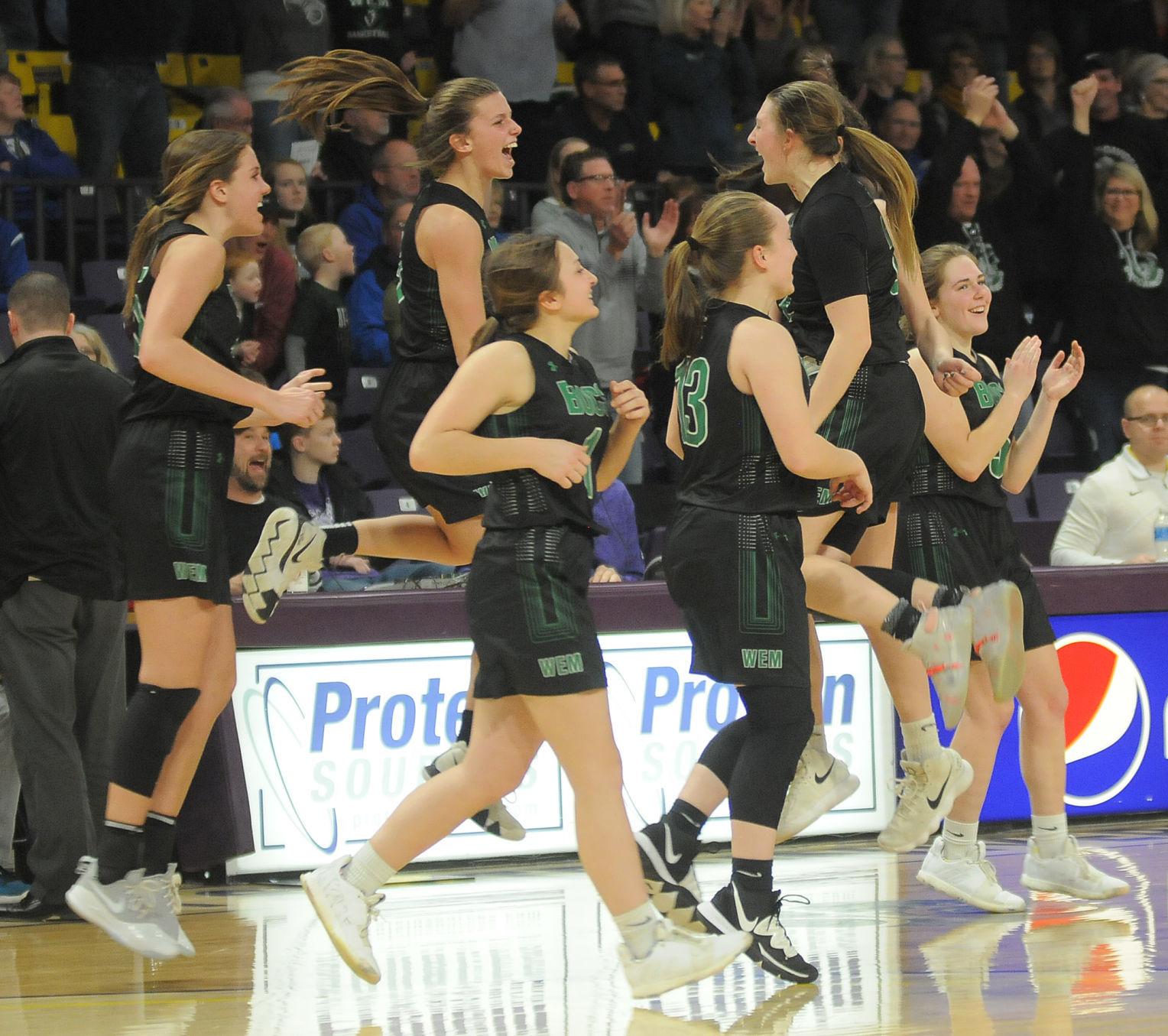 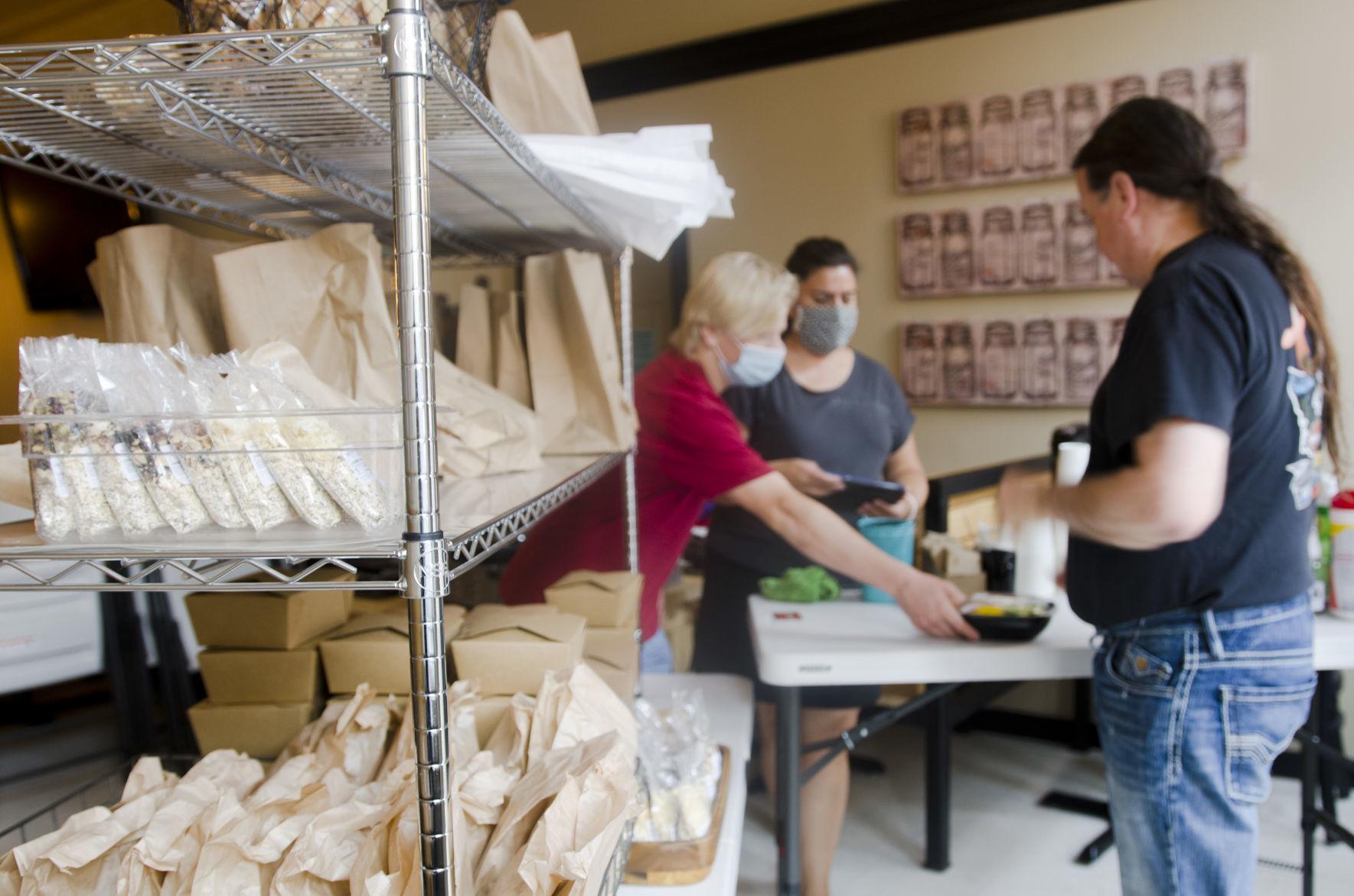 Crack Of Dawn Bakehouse and Market, in downtown Faribault, has been selling their baked goods on the sidewalk located in front of the storefront over the last five weeks. On Friday, employees moved the setup inside due to the weather. Lori Momberg, who owns the business with her husband Chris, said sales have been going “surprisingly well,” as they’ve adapted to accommodating customers by meeting them outside and delivering. Although those accommodations require a little extra effort, Momberg said they are making it work. (Michelle Vlasak/Faribault Daily News) 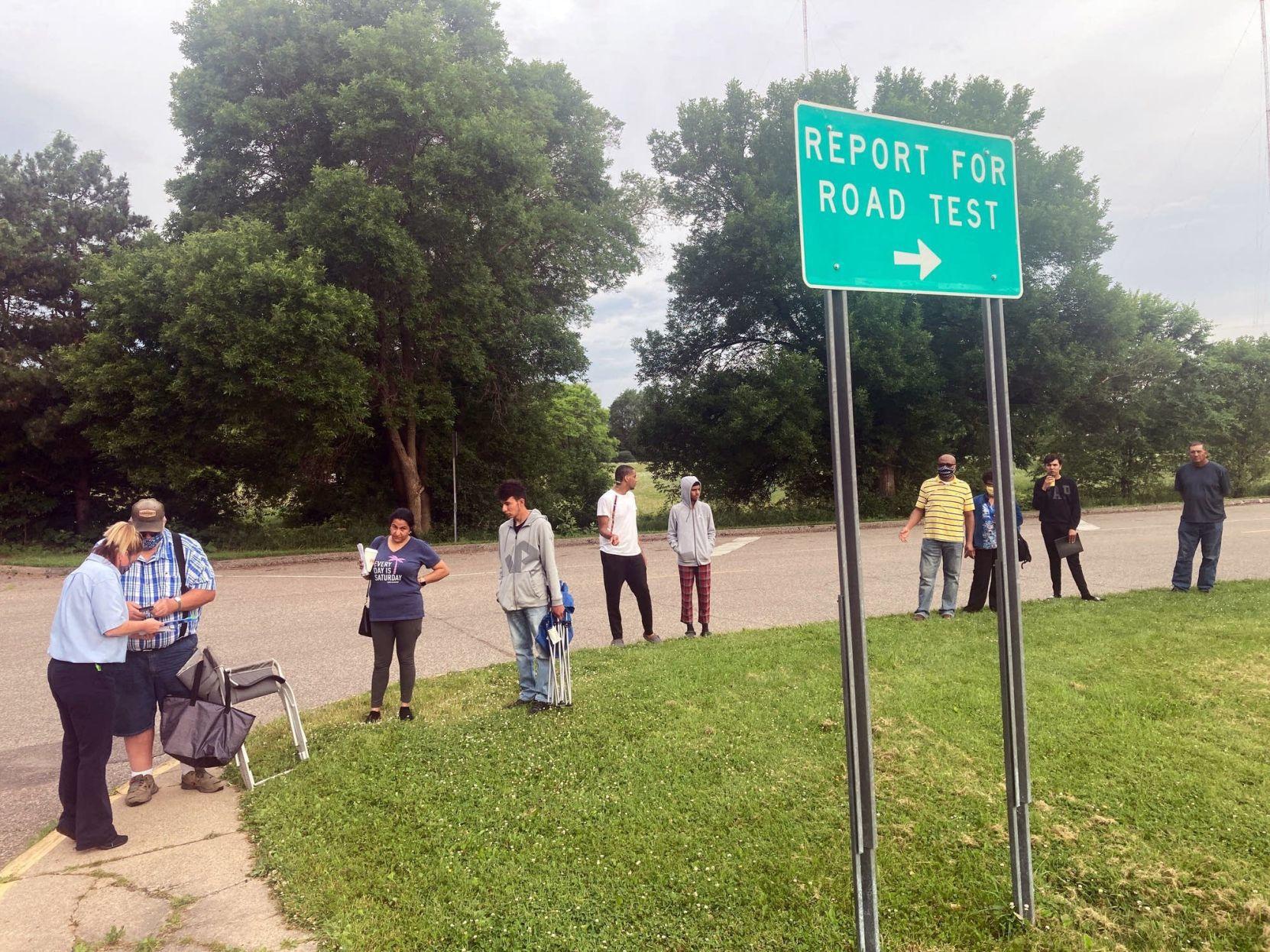 People wait in line to sign up to take their driving knowledge test at the Eagan test site for Minnesota Driver and Vehicle Services on Friday. The DVS system is working through backlogs whole trying to maintain social distancing guidelines. (Peter Cox/MPR News)

Bottle rockets, like the ones seen here at Southgate Fireworks in Michigan, aren’t legal for public use in Minnesota. Ahead of the Fourth of July, medical and law enforcement professionals are urging residents to make sure any items purchased out of the state are legal at home — and to practice certain safety measures, even with things like sparklers and party poppers. (AP Photo/Paul Sancya, file)

While calls related to fireworks tend to ramp up around the Fourth of July, Owatonna police officers have been responding to concerns almost nightly since the start of June.

“For the past few weeks now, we’ve been getting calls almost every night about aerial fireworks shooting off or large booming fireworks,” said OPD Capt. Eric Rethemeier. “Once summertime hits … we have them it seems like on a daily basis.”

In Rice County, Sheriff Troy Dunn has also seen an increase in related calls over the last couple weeks — particularly on the weekends. While the majority are noise complaints from a neighbor, he said his department probably responds to one or two fireworks-related injuries each year.

“There a lot more that go on where people are transported to the hospital or the clinic by a private vehicle,” he added. “It’s kind of scary when you think about the amount of heat and energy that goes through these fireworks that people are using.”

According to a June 23 news release from the Minnesota Medical Association — a nonprofit professional organization — there were just over 9,000 fireworks-related injuries treated in U.S. emergency departments in 2018.

“Every year many Minnesotans get hurt and end up in the emergency department because of fireworks injuries,” said Dr. Keith Stelter, president of the MMA. “We’d prefer that they leave these potentially very dangerous explosives to the professionals.”

Based on statistics from the Minnesota State Fire Marshal, there were 64 fireworks-related injuries statewide from June 22 to July 15, 2018. Over one third of these injuries happened to someone 19 years old or younger. During roughly that same time period, the agency recorded 36 incidents of fireworks-related property damage, totaling just over $260,000.

While aerial and explosive fireworks are prohibited for public sale, possession and use in Minnesota, sparklers and novelty items like snakes or party poppers are available to individuals. Still, surrounding states have different laws and Steele County Sheriff Lon Thiele urged residents to make sure their fireworks are legal in Minnesota — especially if purchased out of state.

“Make sure that they’re legal and that you’re in a safe area and make sure that it’s not a fire hazard. I know we have some rain coming in the next few days, which will be good heading into the Fourth of July,” said Thiele. “If you are in a dry area, you better be very aware.”

Even sparklers, he added, could set off dry leaves and — if close to a building — that could potentially lead to worse. Rethemeier also emphasized the importance of being in a clear area away from anything that could catch with a spark. He also recommended having protective eye gear and water on hand, in case a fire does start.

“No fireworks are 100% safe whether they’re legal or illegal,” added Dunn. “All it takes is one malfunction or one mistake by somebody where they tip something over … or young kids come by and don’t know what it is and the parents don’t see them reaching for it and they end up burning their fingers.”

“Your decisions aren’t as sharp and your reaction time isn’t as quick,” he added. “If you light something and tip it over or don’t get away fast enough, your chances are going to increase for injuries.”

Additionally, both Dunn and Rethemeier urged residents to be respectful of their neighbors — noting that many small children and pets can be easily frightened by the noise. In Rice County, Dunn said there isn’t a set noise ordinance and that law enforcement could be called out to respond to complaints at any time of day.

“Obviously, my recommendation is to let the professionals do it for us,” he added. “A lot of the different area chambers and media outlets are posting who is having fireworks. I would recommend people to check around their area, even if they have to drive 10 to 15 miles … just make sure to drive safely if they’re traveling, and wear their seat belts.”

In the release, Stelter added that it may be disappointing to have community-led fireworks displays cancelled this year due to the pandemic. However, he noted that any products brought in from out-of-state or through other channels can be extremely dangerous given their high explosive content.

“Even relatively basic fireworks like firecrackers can cause significant injury and the MMA would prefer that fireworks be detonated only by trained individuals and not available to the general public,” stated the release.

To help residents determine which fireworks are legal and which aren’t in the state, the Minnesota Department of Public Safety has compiled a list on its website along with other fireworks safety tips. To read more, visit bit.ly/2B3aewl.

Despite the pandemic, a number of local fireworks shows are still slated for the Fourth of July with adjusted, socially distant viewing options. See below for some of the displays in southern Minnesota:

Located off Main Street, across from Blooming Prairie High School.

Will be launched from grandstand track — viewers are strongly encouraged to remain in their cars and adhere to social distancing requirements.

Will be held rain or shine. Guests can watch fireworks from their vehicles at the fairgrounds — no grandstand seating option.