Jordana Zanmiller has long considered Faribault one of her “go-to” towns for restaurants and entertainment. Now, she’s hoping to create a downtown destination for anyone in search of delicious, fresh food and fun. 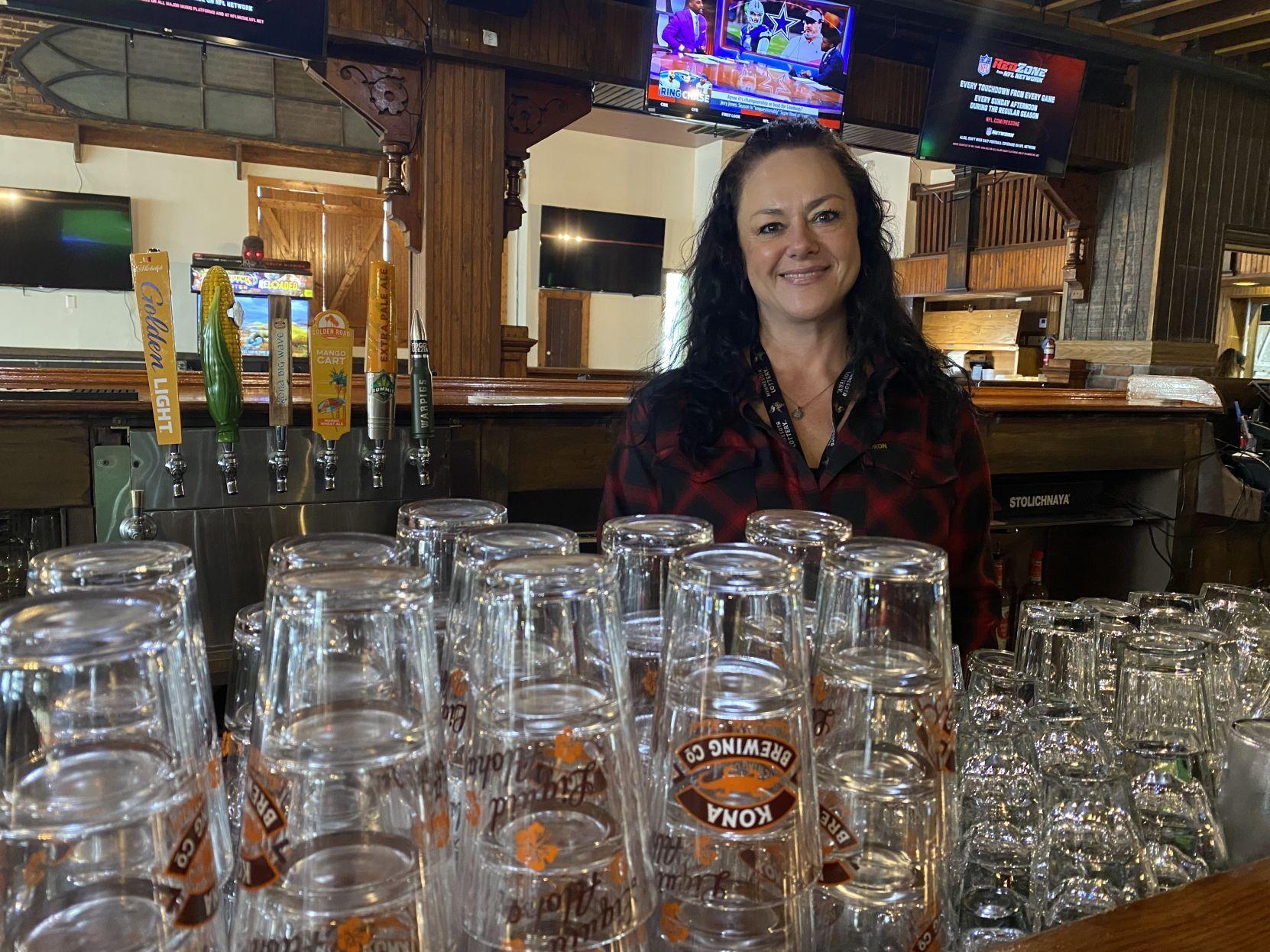 On Friday, Zanmiller opened Sawmill Bar & Grill in the former Grampa Al’s space at 28 Third Street NW. The nearly 90-year-old restaurant, a victim of the COVID-19 pandemic, closed in 2020.

Zanmiller had reached a crossroads after a divorce in September, when a friend approached her with the business idea. It appealed to her, in part, because of family ties. Her grandmother was born in Faribault, and her great grandmother worked as a private nurse for Judge Thomas Buckham, for whom the Buckham Memorial Library is named.

“When this opportunity came up, it just seemed right,” she said.

A full-time flight attendant, Zanmiller operates the restaurant with a 30-member crew that includes her college-age daughter. Friend of 32 years Lisa Zarza has served as a consultant and helped train staff.

It took all hands on deck to prepare for what Zanmiller hoped would be a New Year’s Eve opening, just a few months after she first stepped into the building. Rather than gutting it, she chose to keep much of the interior décor.

“I wanted to honor the legacy of Grandpa Al’s,” she said.

The pressed tin ceiling stayed, as did a bar that separates the dining room and a space that formerly held a stage for live music. Zanmiller said removing the stage will allow for private parties and other events. She hopes to bring back live music at some point.

While Zanmiller had a liquor license in hand Dec. 14, supply chain issues slowed the process. A week into January, she finally decided to move forward.

“I really wanted to just get it open,” she said.

When it came to building a menu, Zanmiller looked toward her own tastes and simple, down-home American food: fresh, one-third pound burgers, pizza, sandwiches. The blast of heat in Sawmill’s Kickin’ Burger comes in part from Faribault-based Cry Baby Craig’s hot sauce.

The menu includes some deep-fried appetizers like the “Blooming Onion” and cheese curds, but also caters to the trend toward healthier options, with broiled shrimp and baked, caramelized chicken wings.

The soup menu will eventually expand. A house specialty, “Nonie’s Chicken Noodle Soup,” is made with an Italian flair: tiny acine de pepe pasta in place of traditional noodles. 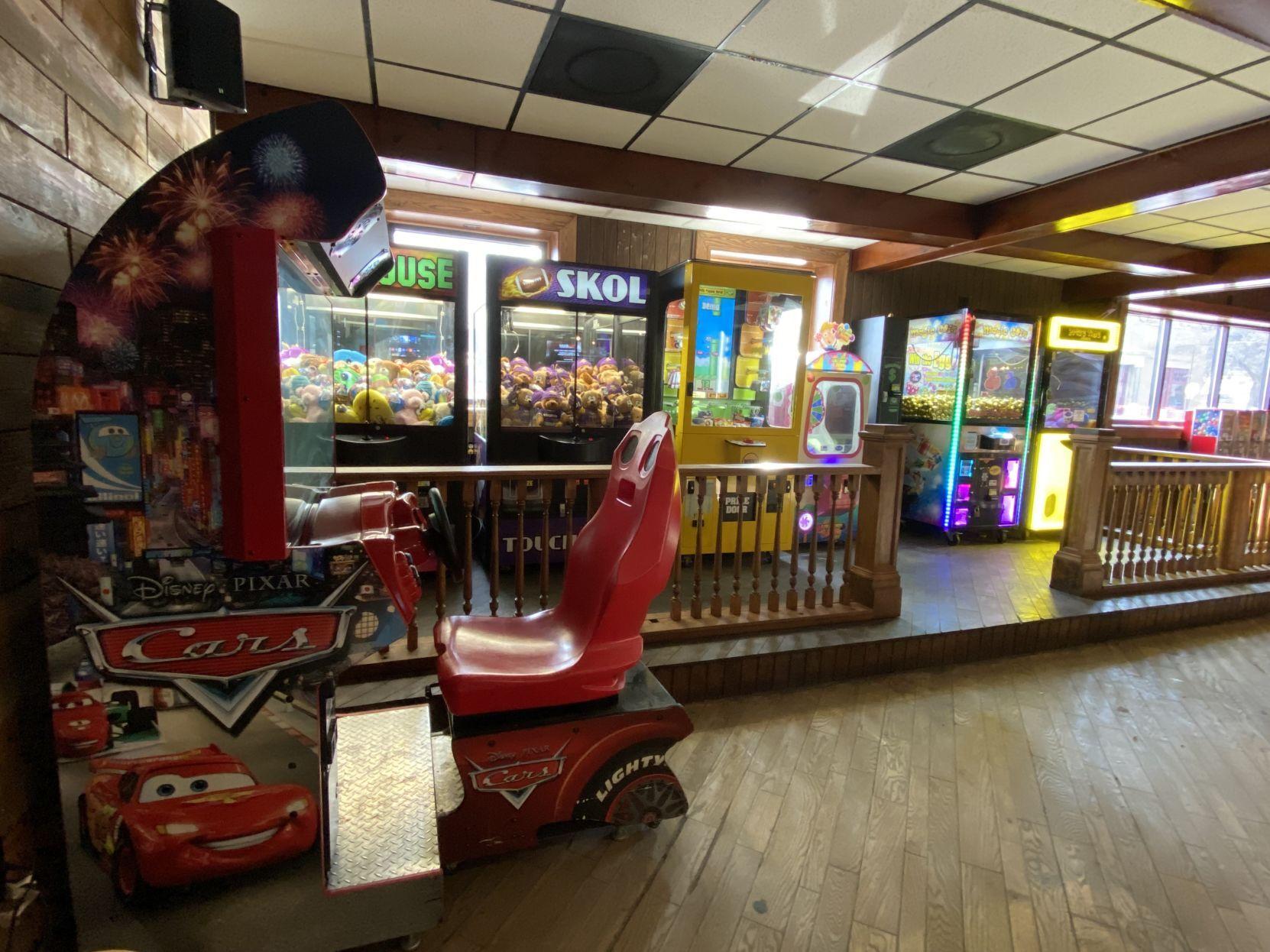 Coin-operated machines located near the front at Sawmill Bar and Grill allow parents in the dining room to keep an eye on their children. (Joni Hubred/southernminn.com)

The goal with each meal is to ensure Sawmill patrons leave happy.

Friendly bartenders can also mix up your favorite cocktail, provided the ingredients are available.

She takes special pride in a row of coin-operated games for kids placed near the building’s front entrance, where parents can keep an eye on them.

“I just want this to be homey, a place where you can relax and chill out,” she said. “I want it to be fun and safe.”

While she’s completed all work related to safety and cleanliness, Zanmiller said some projects remain. She’d like to renovate the bathrooms, a $30,000 project, and organize the basement and some storage areas.

People have been curious about the second floor apartments. One is occupied, another leased. The third is a work in progress.

As with all old buildings, something always needs to be fixed. But for now, the focus is building the menu and keeping Sawmill customers happy.

“We’ll have growing pains,” Zanmiller said. “I just hope people will be patient with us.”

Don Rasmussen was known for a lot of things, but he was known by most for his caring, but straightforward attitude. He had a long lasting effect on a lot of people.

Through his time as the owner of and employee at Glenn’s Towing & Service, Don helped everyone he could. It was through Glenn’s that Don became so well known, but it is thanks to his personality that he will always be well remembered. 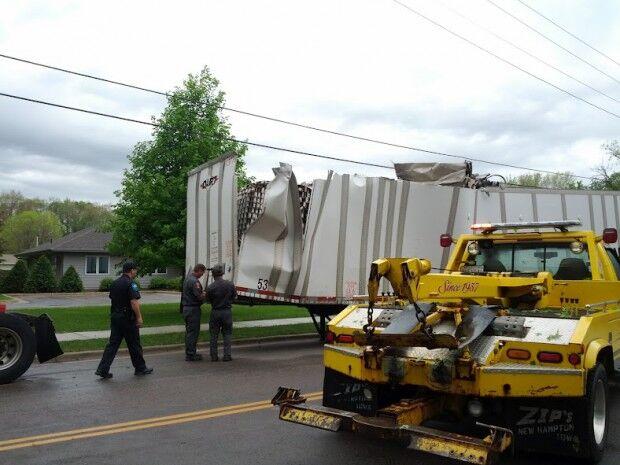 Every day, Don Rasmussen would help the community in some way. Most days, he did this through Glenn’s Towing & Service. (File Photo/southernminn.com)

Don took over his father Glenn’s service station in Faribault in the 1980s, quickly becoming an integral part of the Faribault community.

Don always loved to talk to anyone that would listen, whether they were a customer, a longtime friend or a complete stranger, Don would find something to talk about. That said, he wasn’t afraid to speak his mind.

“Don was always nice, but he could be hard when he needed to be,” said Steve Bock, the current owner of Glenn’s.

“He would always give you a good heart to heart if you needed one,” said Bock, “He told it like it was, but he was also nice and caring.”

Don was full of wisdom and loved to share it. Whether he was pumping someone’s gas at Glenn’s or pulling their car out of a ditch, He always had something to say.

“Don has become a friend over the years. I met him through the business and he was out there with us through the worst,” said former Rice County Sheriff Troy Dunn.

Dunn got to know Don well in his time as sheriff.

“Don always tried to teach people to do things the right way from the start. Treated you like family and was always honest. You could call him in the middle of the night, and he would come.”

Looking back on his time with Don, Dunn described the bond that Don was able to have with so many people in the community.

“Glenn’s is not just a gas station or the place you get your tires fixed; he treated you like a friend. He was a friend,” said Dunn.

Don’s friendly and outgoing attitude made him very easy to talk to, even in the middle of the stressful situations that he found himself in daily.

“He always had a witty sense of humor and advice whether you wanted it or not,” said Dunn.

Like many others, Faribault Fire Chief Dusty Dienst got to know Don well through work.

“I spent a lot of time with Don in the ditch over the years, wondering ‘how did this happen?’ Sometimes it was very serious; other times, not as much. He was a nice guy and liked to help,” he said.

Don was the kind of person that would do anything to help somebody out in their time of need. 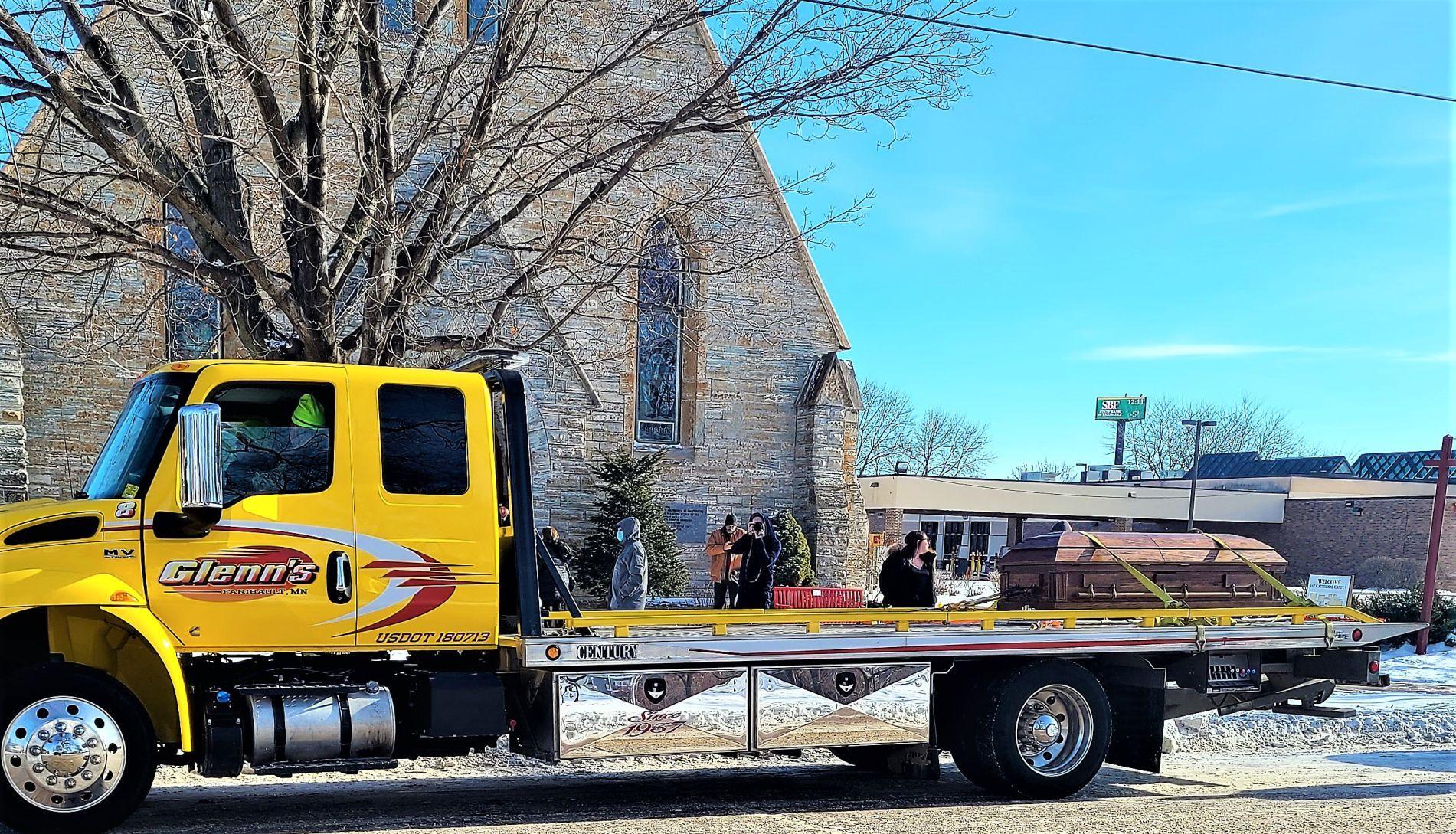 Don Rasmussen’s casket on the back of his flatbed tow truck. (Spencer Beissel/southernminn.com)

His profession is what he was known as to many, and it was an equally big part of his own identity. On the day of his funeral, instead of using a hearse, Don was brought to the cemetery on the back of his iconic yellow flatbed.

There was no question that was the way Don wanted to go. As his casket was carried out of the cathedral, all of the Glenn’s employees, family, and friends stood to witness his last ride. It was through this same flatbed and the rest of his fleet of recovery vehicles that Don was able to be there for countless people in his lifetime of serving the community.

In a message sent out by the school district to parents, Faribault Public Schools announced that both the middle school and high school will be transitioning back to distance learning, at least for the time being.

The message stated that more than 15% of staff have had to stay home, due to COVID-19 or other illnesses, since Jan. 3, the first day back after winter break.

Due to staff shortages, caused by COVID and other factors, Faribault Middle School will be switching to online classes Jan. 14, and Faribault High School will be doing the same Jan. 19. During this time, extracurricular events will still be held in person.

Both schools are expected to return to regular, in-person learning Jan. 24.

The district is hopeful that the week of distance learning provides enough time for students and faculty to avoid the current wave of the Omicron variant of COVID-19. Superintendent Todd Sesker said that the district will reassess this date if the need arises.

The district is actively searching for substitute teachers to fill the roles of teachers that cannot be there. They are taking steps to incentivize subs to come in, including offering up to $200/day (roughly $60/day more than their previous rate) and $18 per hour for substitute paraprofessionals.

“Before COVID, it was usually easy to find substitutes, but once COVID came, it has become increasingly difficult to get substitutes in,” said Bente.

This is due, in part, to the fact that there can be dramatic jumps in the amount of subs needed overnight. One day, the school had 11 staff members out; the next morning, it was 15. With such unpredictable cases where teachers cannot be there, more subs are needed.

The message from the district also stated that the staff shortage “has made it a challenge to provide quality instruction and adequate supervision within our school.” It is because of this that the schools will be going back to the online learning model.

FPS has provided staff additional training in Schoology since the beginning of the Coronavirus pandemic. Schoology is the digital portal that the school uses for grades, assignments, tests, and communication between students and staff.

This online service allows teachers to “push information and assignments out to students, and it allows us to do school when we can’t be in the building,” said Bente.

When distance learning was first used by FPS, teachers and students struggled to adjust. As time went on, people learned the system and adjusted. Distance learning is not the school’s first choice, but it is the next best thing when being in person is not possible.

Schoology was used before COVID as well, but the way that it is utilized has changed. Previously, it was mainly for grades and assignments to be submitted digitally while in school, but during times where distance learning is deemed necessary for safety, Schoology is used to provide the same education that students would receive in person.

This way, students and teachers can learn and teach without worrying about contracting COVID. Leaders also hope that the time in distance learning will be long enough for anyone out with COVID to return to in-person instruction, and if they cannot for any reason, they hope to have subs ready to fill those roles in the interim.

Over the summer, FPS faculty received further training and workshops on distance learning, in order to become better prepared in case they had to resort back to online schooling. While the district would prefer to continue to hold classes in person, they are viewing the issue as a matter of student and faculty safety and, as said by Sesker, are “prepared to switch.”