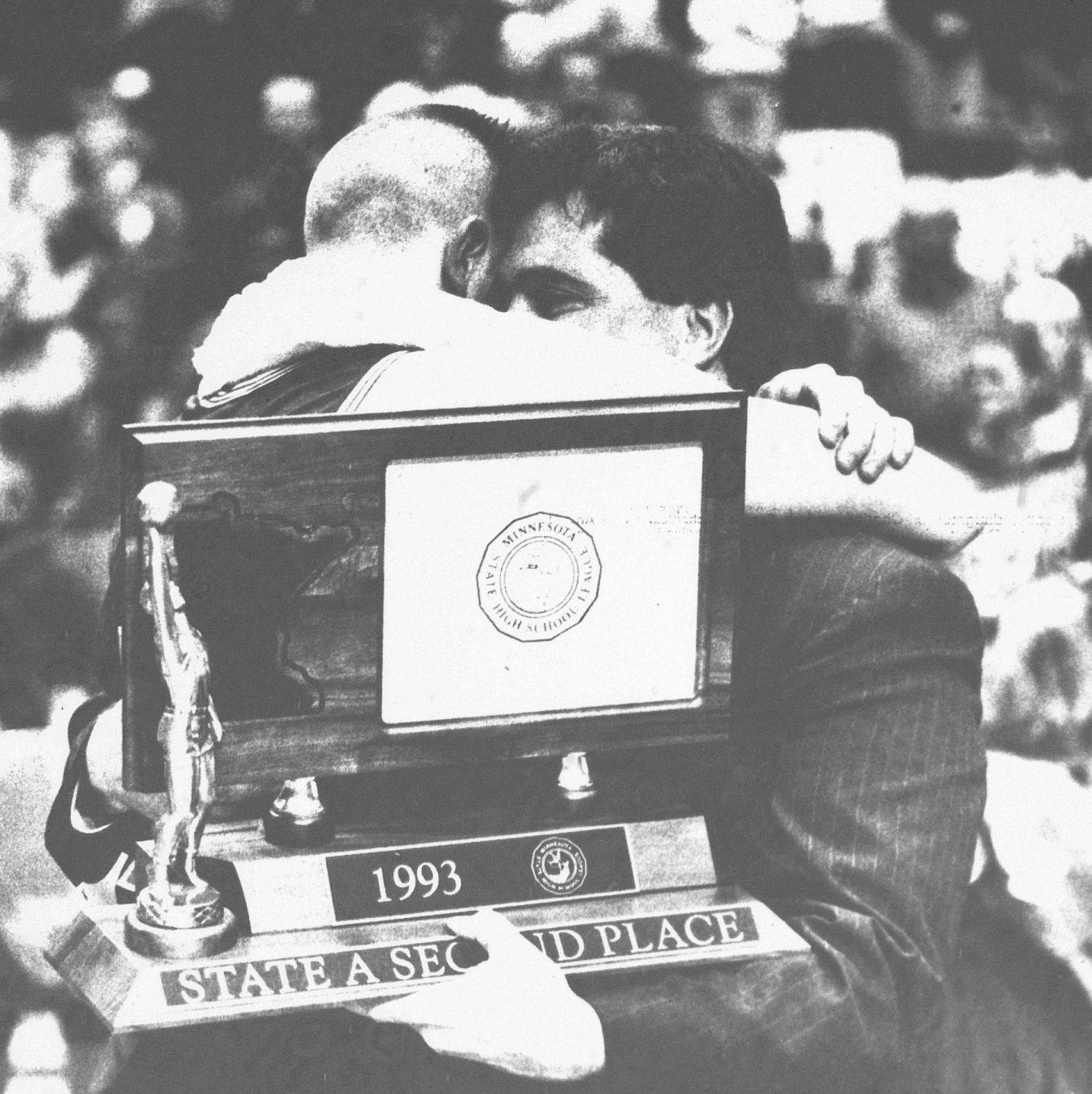 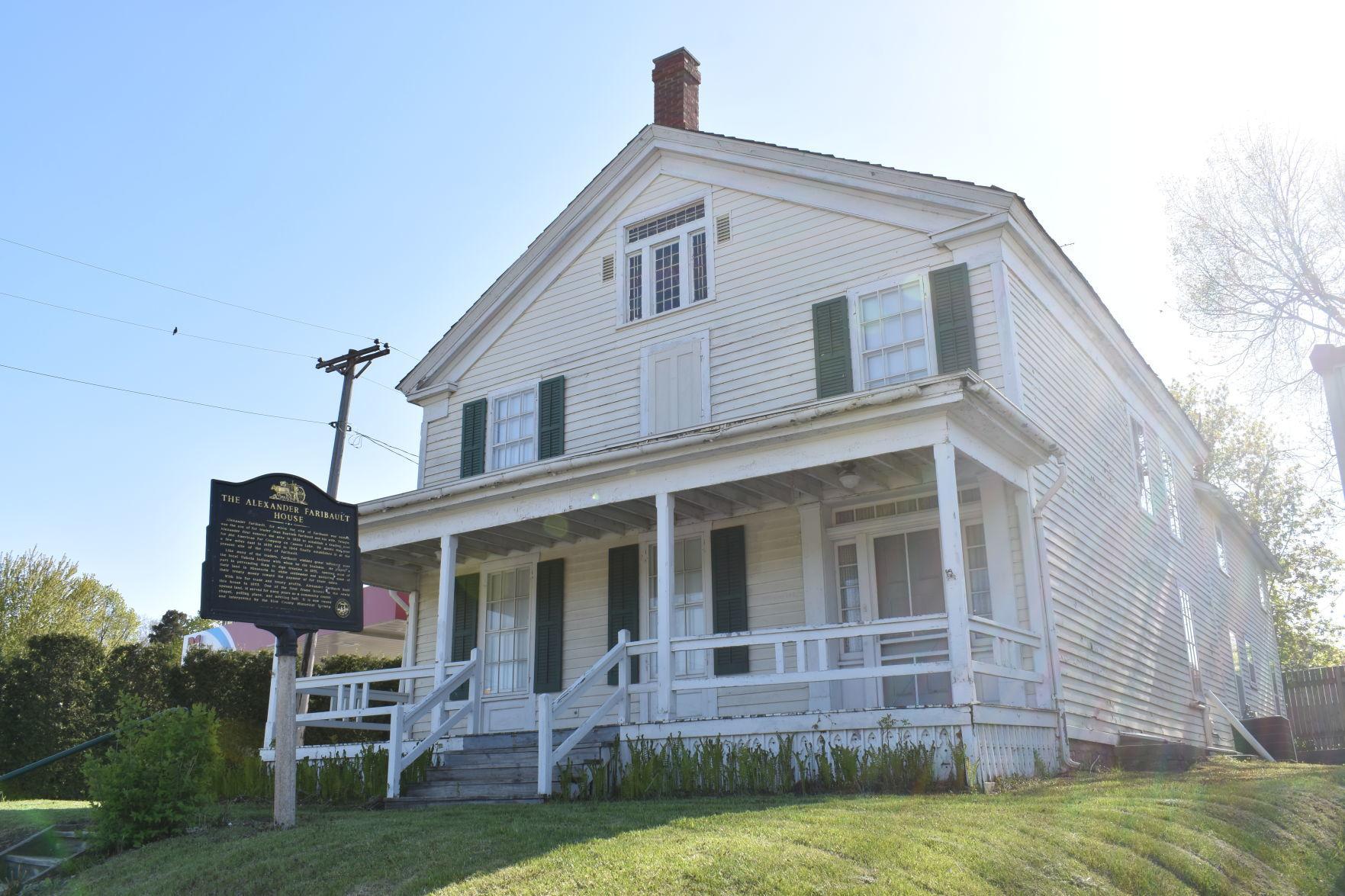 The Alexander Faribault House in Faribault is in need of more than $250,000 in repairs. Faribault’s Housing and Redevelopment Authority has approved $27,000 in hopes a future grant through Minnesota Historical Society will be approved. (Andrew Deziel/Faribault Daily News)

The local restaurant industry was among the first casualties of COVID-19, and it remains one of the hardest hit. Local restaurants have been closed to the public for nearly two months, with only takeout and delivery options available.

Gov. Tim Walz is expected to announce on Wednesday whether he plans to extend the state’s Stay at Home Order, which is currently set to expire Monday. Even as the state begins taking tentative steps to reopen, it’s still unclear when local restaurant owners might begin to recover even if legislation now before Minnesota lawmakers gets the governor’s signature

As the unemployment rate reaches heights not seen since the Great Depression, the pandemic has inflicted economic damage that won’t disappear overnight. It’s also unclear how comfortable customers will feel in public spaces until an effective vaccine or treatment is developed.

“A lot of us don’t know what our future looks like right now,” said Janna Viscomi, a Faribault city councilor and co-owner of Bernie’s Grill in the downtown historic district. “Some of the uncertainty we face relates to the state’s actions, some to human behavior. Both of those are challenging to predict.”

The issue is raising concern at the Minnesota legislature. Last week, Sen. John Jasinski, R-Faribault, who has family in the restaurant industry, introduced a bill subsequently co-sponsored by Sen. Rich Draheim, R-Madison Lake, that would create a $20 million fund for restaurants forced to dispose of perishable food or beverages.

Restaurants would need to provide documentation showing when the food or beverages were purchased and when they were donated or disposed of. The bill would be a one-time investment specifically for the current fiscal year.

Due to the shutdown, Viscomi already had to throw away a significant amount of food and expects to throw away more. She hasn’t kept careful track of all of that has been tossed, so she might not be able to get all of it reimbursed, but said it could still be helpful.

“Any relief that our businesses that have been totally shut down could get could be very helpful,” he said. “That way, they’ll have a chance to open back up once restrictions are lifted.”

While the state has allowed businesses to remain open for take-out, pickup or delivery, many restaurants have found that model difficult to sustain. Bernie’s tried it briefly after the Stay at Home Order went into effect, then abandoned it. As a result of the pandemic, Viscomi said that Bernie’s is likely to make lasting changes. In the short term, she expressed gratitude that the state’s unemployment insurance system has helped to keep furloughed employees afloat.

As the state approaches summer tourism season, the uncertainty has only grown. According to a recent survey from Hospitality Minnesota, more than 50% of Minnesota hospitality businesses say they’ll face permanent closure if conditions don’t improve in the next two months.

To help save those businesses, Hospitality Minnesota has proposed a sweeping and expensive plan. The centerpiece would be $120 million in grants for small business emergency loans, accompanied by generous relief from taxes and regulatory fees.

Hospitality Minnesota Director of Government Relations Ben Wogsland said that while the situation at the legislature is “fluid,” he remains optimistic that efforts to protect at-risk businesses in the industry will be enacted. He said Jasinski’s proposal could be a sound way to get funding to those who need it most.

According to Explore Minnesota, the leisure and hospitality industry adds $16 billion to the state’s GDP and accounts for 11% of all private sector jobs. Industry supporters have effectively argued that the state can’t afford to not save it.

However, the state suddenly finds it cash strapped, with a $1.3 billion projected surplus transformed into a $2.4 billion deficit virtually overnight. The reversal is an abrupt departure from years of economic growth that enabled it to build up a $2 billion rainy day fund.

In contrast to the federal government, local and state governments have strict restrictions on borrowing. The major exception is the state’s bonding bill, through which legislators can finance fund roads, bridges and other infrastructure projects.

Jasinski’s approach enjoyed bipartisan support, with Rep. Mike Sundlin, DFL-Esko, the lead sponsor in the House. With the Senate controlled by Republicans and the House and Governor’s Mansion by DFLers, Minnesota is the only state in the U.S. with a divided government.

However, with funds limited and the clock ticking down on a legislative session scheduled to end May 18, it was rolled into a much larger economic assistance bill authored by Sen. Paul Anderson, R-Plymouth.

Anderson’s bill will provide $60 million in small business relief grants through the Commissioner of Employment and Economic Development. Half of that must go to businesses in the seven-county metro area and half to Greater Minnesota businesses.

In addition, 30% of grant funding is reserved for “microbusinesses,” with fewer than five employees. At least 15% will go to businesses that are majority owned and operated by women minorities, or veterans.

Funds of up to $10,000 per business will be distributed on a first come first served basis. The bill’s primary funding source is the federal government, which provided billions in aid for state and local government authorities through its $2.2 trillion CARES Act.

Prior to the coronavirus pandemic, people on unemployment in Minnesota were getting about half of the wages from the job they lost, capped at $740 a week. Now, in addition to the state money, they’re all getting $600 a week from the federal government through July. So, why go back to work?

“I think it’s going to be a really big problem once the time comes where you really, really need people back,” Ehlenz said. “I don’t want to be mean to employees or anything like that, but we’ll need them back.”

Ted Chalupsky, owner of a locally based employment services company called The Right Staff, said employers offering the lower end of the pay scale — $25 an hour or less — are increasingly competing with the new unemployment benefits.

“They’ve been having a hard time either getting former employees reengaged or finding employees that are currently taking advantage of that benefit to get them to come to work,” he said.

Chalupsky said that if an employer offers a furloughed employee a job, the employee’s unemployment benefits could be in jeopardy if they refuse to return to work. He said employers also have a much larger pool of potential workers to draw from than before the pandemic because so many people have lost their jobs and want to work.

He doesn’t want to bring back employees who are getting the enhanced benefits only to possibly have to send them home again.

Scott said he decided to rely primarily on people who are not eligible for unemployment benefits.

“So, high school kids, mostly,” he said. “We brought back our part-time high school kids and have really started utilizing them in a stronger fashion than we were using before. By hiring them, we’re actually helping them support their parents and the rest of the family.”

According to a recent survey’s results, teachers and staff members are regarded among the strongest assets of the Faribault school district. Pictured are teachers that participated in the new teacher tour at the beginning of this academic year. (Misty Schwab/Faribault Daily News)

According to a recent survey, Faribault Public Schools teachers and staff are one of the district’s strengths, while student discipline remains a top concern.

This feedback and other comments from the community survey, which the district re-released from April 22 through May 7, will play a crucial role in the development of the Faribault school district’s strategic planning process.

Big River Group, the district’s hired strategic planning service, initially released the survey to three separate groups — employees, students and community members — in March. Desiring a more robust response from the community, the School Board approved an extension of the survey after schools closed in response to COVID-19. Community responses increased from seven to 24 the second time around.

Bruce Miles, the district’s strategic plan advisor, presented the updated results during the Faribault School Board’s virtual meeting Monday. Miles said participants were “very appropriate in their responses” and didn’t place blame on anyone for the issues they listed. In compiling the results, he said there was no “trending feedback” from the three groups.

“An overwhelming majority of the answers were just boots on the ground,” said Miles. “ … People were pretty operational in their answers.”

Across the three surveyed groups, teachers and staff were listed under the bracket of “things working well within the district.” All three groups recognize that Faribault teachers and staff put students’ learning as “a top priority.” Employees in particular highlighted the positive culture between teachers and staff members as well as the communication between these groups. In addition, employees included the administrative team and literacy coaches as strong contributors to the districts’ success.

Without prompting, the three surveyed groups all acknowledged student discipline as a factor that deserves more attention. Students themselves expressed in the survey that lack of respect for teachers threatens the learning of students who want to learn. Employees acknowledged aggressive and inappropriate behavior from students as a problem as well, and identified two contributing factors as a lack of clear expectations and consequences.

Equity is another topic all three groups addressed in the survey results. From the community standpoint, the district could improve with more diversity training and understanding of diverse cultures. Students also acknowledged a need for more opportunities and resources for minority students. For employees, equity among Faribault Public School buildings’ policies and procedures is another concern.

Before compiling all the data and working with the School Board to form a clear vision, mission statement and goals, Miles will obtain more community feedback via an online portal. Big River Group will meet with community members during sessions at 1 p.m. May 18 and 7 p.m. May 19 via the portal. This will give community members a chance to discuss what’s working well and what needs work within the district.

WHAT DO YOU THINK?

To view a more in-depth breakdown of the survey results, visit the Faribault Public School's board book: bit.ly/2YWuk4J.

Virtual community wide strategic planning meetings will be held via Zoom conference at 1 p.m. May 18 and 7 p.m. May 19. 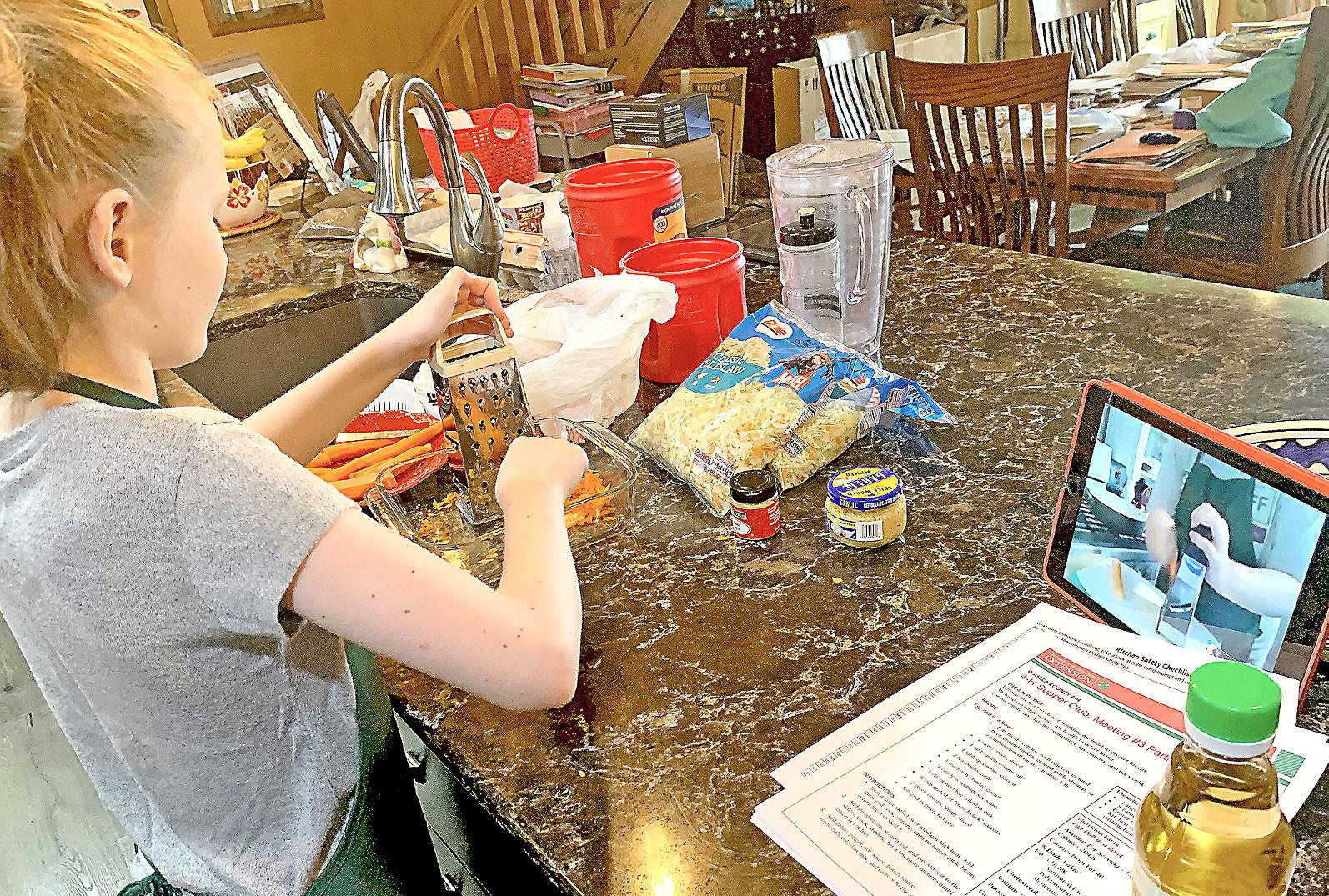 Alexis Olson, of New Richland, logs on to the Waseca County 4-H Supper Club Zoom meeting to learn how to cook a meal from the very beginning steps. During the COVID-19 pandemic, local 4-H groups have moved their programs to a virtual platform. (Submitted photos) 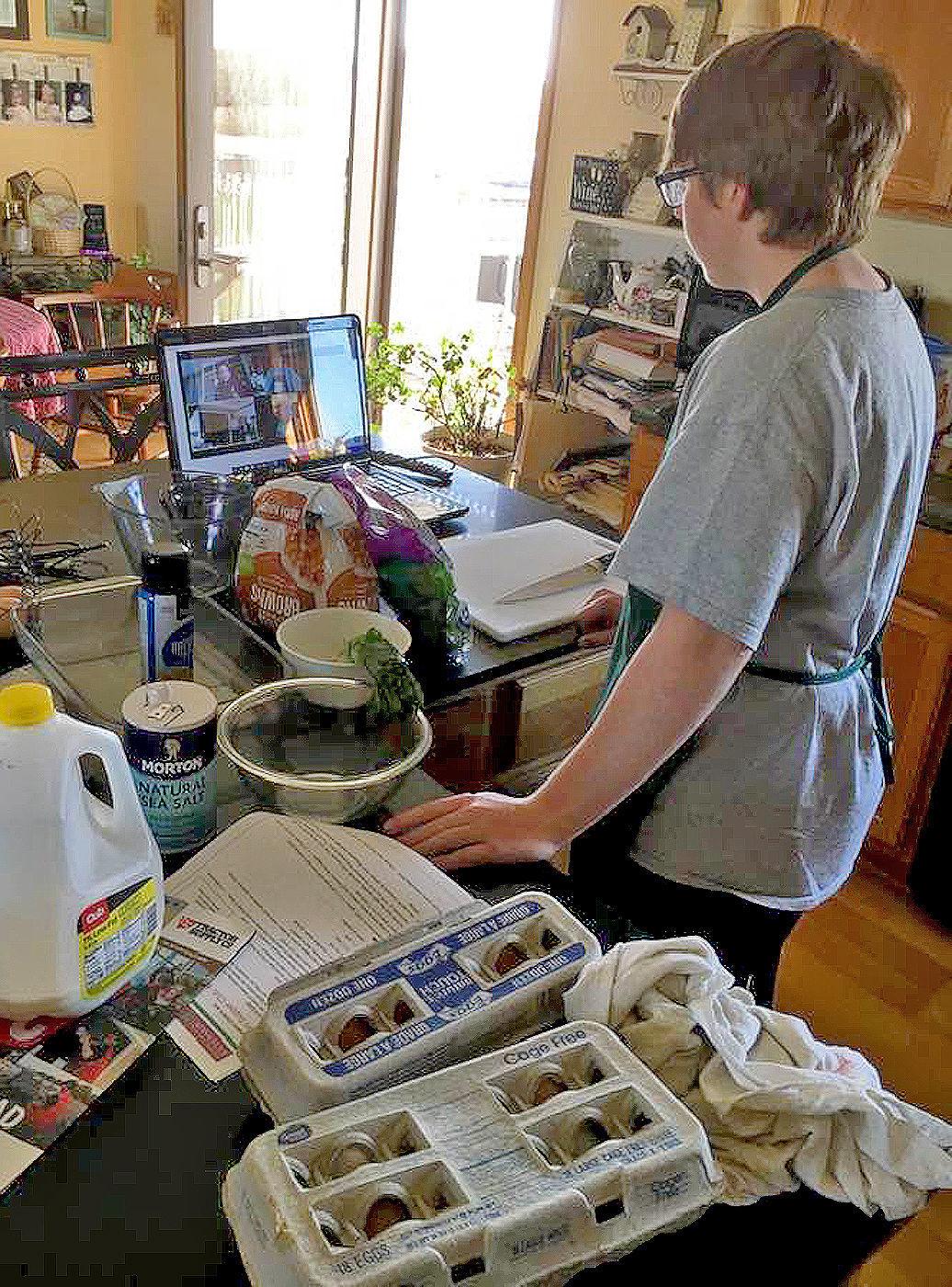 Ben Walechka of Janesville participates in the Waseca County 4-H Supper Club, learning to cook a meal for his family while at home during COVID-19.