Georgia’s elections don’t often draw much attention in Minnesota. But Tuesday’s U.S. Senate runoffs will determine who controls the upper chamber for the next two years. Republicans need one victory to maintain Senate control and force Joe Biden to contend with a divided government. Democrats need a sweep for a 50-50 split, giving the tiebreaking vote to Vice President-elect Kamala Harris. 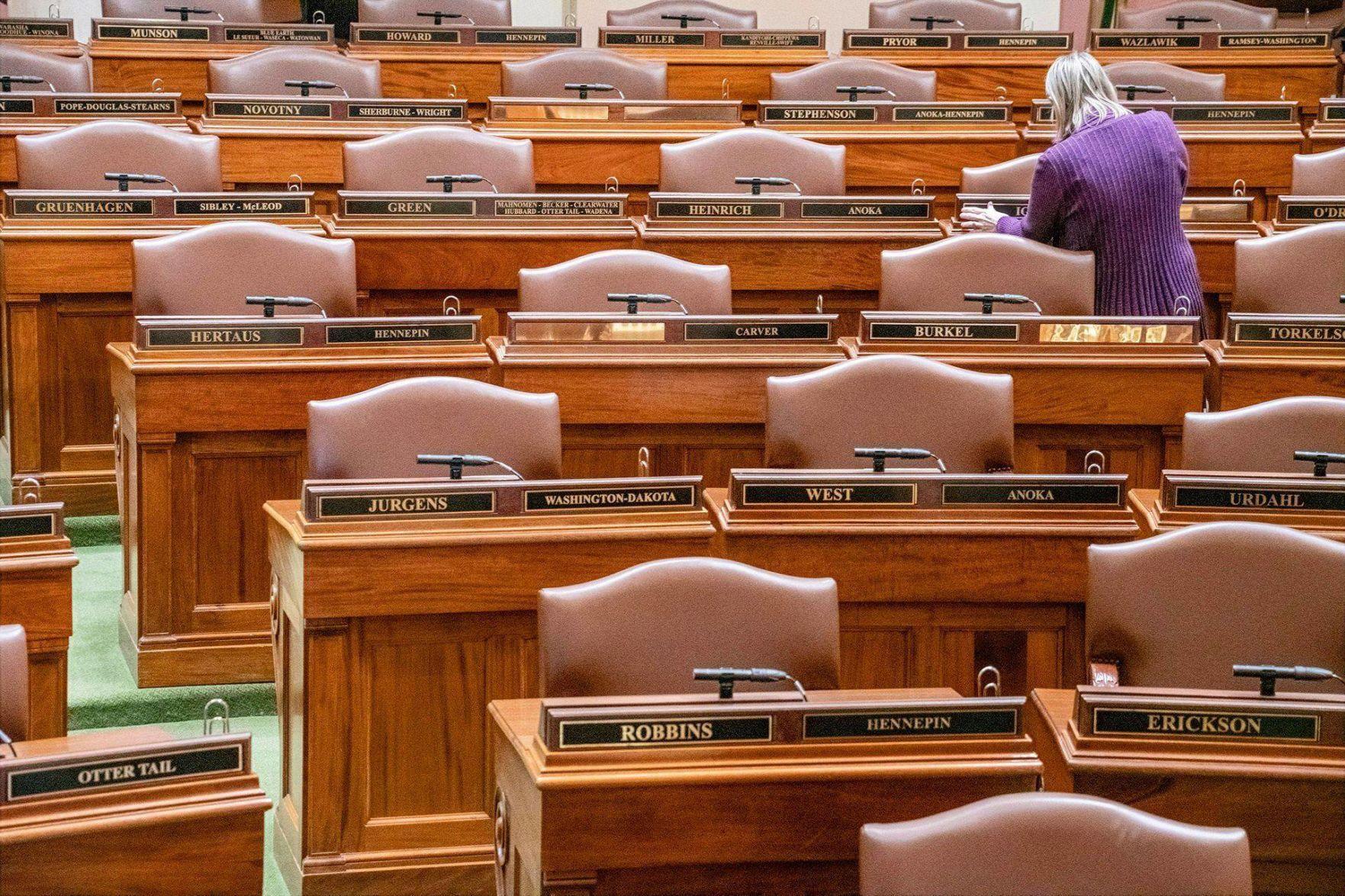 Preparations for the 2021 legislative session include ensuring all desks are properly labeled and that everything is in working order. (Photo courtesy of Minnesota House of Representatives Public Information Services)

An Owatonna man is charged with attempted murder in relation to a November shooting in Brooklyn Park which wounded two people. Officials believe the shooting is tied to gang activity, according to court records.

Cortinez Armoney Powell, 23, has been charged in Hennepin County Court with two count of attempted first-degree murder in connection to an incident that occurred in Brooklyn Park Nov. 30. Powell was arrested and booked in the Hennepin County Jail Friday.

According to court documents, which include testimonies given to the Brooklyn Park Police Department by multiple victims, the events transpired as follows:

On the night of Nov. 30, the Brooklyn Park Police Department was dispatched to a report of several gunshots and someone being shot. The responding officers located a vehicle on the shoulder of County Road 81, just south of 694, riddled with bullet holes on the passenger’s side.

Two victims were located inside the vehicle with multiple bullet wounds. The driver was shot in the right leg, right arm, left elbow and behind his right ear. The front seat passenger had bullet wounds to his head, arm, leg and back. A subsequent medical examination would reveal the front seat passenger had been struck nine times by the gun fire. Both victims were conscious when the officers arrived.

While processing the scene, police located 29 discharged 9mm cartridge casings. Forensic analysis of the cases would eventually link the firearms to numerous other shooting incidents in the Minneapolis area. The officers also located a baseball hat in the middle of the road that they believe to belong to Powell. The DNA analysis on the hat is still pending.

Two other passengers were in the back seat of the vehicle during the shooting, but were not wounded.

The front seat passenger told the police they belonged to a criminal street gang called “TFS Label,” which sides with the “Highs” affiliation of the criminal street gangs in Minneapolis. According to their statements, they had been arguing with rival “Lows” gang affiliates over Facebook, leading him to receive a threatening direct message.

According to the testimony of the front seat passenger, the four individuals left his home in Crystal on Nov. 30 and noticed two vehicles parked in a peculiar location outside his house. As they headed north on County Road 81, the victim said it became obvious the vehicles were following them. As they approached an intersection, the victim said gunshots were fired from both the suspect vehicles before they sped away.

The other three occupants of the vehicle gave consistent accounts of the incident.

According to the criminal complaint, a search of the front seat passenger’s phone revealed he had communication with Powell on Nov. 29 that appeared to reference gang-related issues and the possibility of future gunfire.

The investigation has been complex and is ongoing, in part due to the National Integrated Ballistic Information Network – or NIBIN – investigation leads that were generated form the casings at the scene. However, working with the Minneapolis Police Department gangs investigators, Brooklyn Park investigators were able to narrow down suspects in the shooting to Powell and five other Lows affiliates: Savion Samuel Reeves-Crittenden (18), Stephon Leron Parker-Rouse (23), and Donta Jaboat Brown (27), all of Minneapolis, as well as Cinque Daprice Owens (26) of New Brighton and Diamonte Lattrel Morris (21). There is no available place of residence for Morris.

On Dec. 3, Minneapolis officers located Brown and Parker-Rouse as they were attempted to get into a vehicle and a foot chase ensured. Parker-Rouse tossed a 9mm handgun during the chase, according to the police report, and both men were apprehended.

The five suspects are members of the SUB criminal street gang and the group had been “terrorizing the city” on the night of the Brooklyn Park shooting. The group defaced a memorial to a rival gang member and then went to a home in Crystal to initiate a hit on an opposing gang member. Parker-Rouse clarified they intended to kill this person.

With the exception of Brown, Parker-Rouse said they were all armed with 9mm handguns.

According to court documents, Parker-Rouse said following the shooting, Powell had indicated that he lost his hat at the scene. He indicated the group believed they had successfully killed rival gang members.

During a post-Miranda recorded interview with Powell, police records show Powell did not deny being present during the shooting and at one point commented, “I would rather just do my time.”

Bail without conditions was set for Powell at $1 million. His next court appearance is scheduled for Jan. 12. Powell has a pervious 2015 felony conviction for first-degree aggravated robbery in Hennepin County.

Reeves-Crittenden, Parker-Rouse, Brown, and Owens have all received the same charges in connection to the shooting.

In Nerstrand, work on a new coffee shop next to Nerstrand Meats has already begun. (Andrew Deziel/southernminn.com)

Four years after his sudden passing, one of the late Clyde Heggedahl’s biggest dreams for the business and beloved city of Nerstrand could finally be coming to pass.

After three years of work and negotiation, Mary Heggedahl said that work is finally ready to begin on a “Boot and Lu’s,” a small restaurant serving ice cream, coffee, and of course sandwiches and other lunch entrees made from the Nerstrand Meat Market’s famous meats.

Heggedahl originally intended to name the new restaurant “Gathering.” Instead, she decided to go for a name that was both catchier and pays homage to her late husband, incorporating his long-held nickname -—and hers.

Now that she’s in her mid-70s, Heggedahl could easily kick back her feet and enjoy a quiet retirement after many years running the Meat Market with her husband. However, her passion for Nerstrand is driving her to bring the small restaurant to fruition.

While Boot and Lu’s won’t be especially large, it’s likely to play an important role in the community.

Once it opens, which could happen as soon as March, Nerstrand will have a business where area residents can sit down and chat over a cup of coffee for the first time in many years.

The cafe will be located in the old Nerstrand Fire Hall, which the city’s volunteer fire department left behind last year for a larger building. Located at 2 Cherry St., the new Fire Hall was built thanks to the approval of a 2018 referendum that significantly hiked property taxes.

Even after the referendum was approved, the Fire Hall proved to be a contentious topic. It took a 3-2 vote from the City Council, with Mayor Jarod Alvarez casting the tie breaking vote, in order to approve bids for the project the next spring.

With the Fire Department leaving behind its old building, Heggedahl moved to purchase the building, which is sandwiched between the Meat Market, which Heggedahl and her husband owned and operated together for decades, and Nerstrand’s historic city hall.

Heggedahl said that she and her late husband were staunch supporters of the Fire Department, and that Nerstrand’s firefighters have always supported them as well. As soon as Boot and Lu’s opens, she hopes to hold a special event for the department.

The small building was sold by the city to Heggedahl in February, for $25,000 following council debate. An interior design permit was granted without too much trouble, but concerns were raised over the location of a proposed handicapped parking spot outside.

Heggedahl’s architect, David Chant with Faribault’s D.J. Medin Architects, proposed adding the new handicapped parking stall to the backside of the building, in close to a new handicapped accessible entrance. Because the spot doesn’t fall completely within the lot Heggedahl purchased from the city, a lease agreement would needed for the Meat Market to use the stall. However, because of its location the proposed parking stall could be used by City Hall as well — something Chant argued could be a “win-win.”

“The parking stall would be both on Mary’s property and city property,” he said. “Mary is offering to pay for all of the improvements, carry insurance for any liability, it’s kind of a win for the city.”

Briefly approved by the council, the lease agreement was rescinded shortly thereafter. However, the issue is expected to be revisited by the incoming council, which will be free to do as it wishes.

To the project’s critics, the handicapped parking stall would be better located along Cherry Street or another main thoroughfare in order to avoid utilizing city property and to give it a more central location for access to downtown businesses.

Chant said he doesn’t disagree that Cherry Street would be a good place for a handicapped parking spot, but argues that the spot needs to be in the back to make room for a handicapped accessible ramp that could be used to access both Boot and Lu’s and the Meat Market.

By contrast, Heggedahl and Chant maintain that locating the parking spot in the front would force the construction of a ramp that would take up so much space, there would hardly be room for any customer seating in Boot and Lu’s.

Jan. 5 will see a changing of the guard at City Hall, with two new councilors as well as a new Mayor set to take office, and Heggedahl is optimistic that with their support the project is likely to move ahead.

Mayor-elect Nikki Portillo expressed frustration regarding the tone of the debate in recent weeks. Portillo pledged to work to “lower the temperature” and blamed much of the “messiness” around what she described as the city’s failure to follow proper procedure.

Portillo promised to review the city’s permit system to make sure it provides for ample communication and transparency. In addition, she said that she would make sure city staff go through training with the League of Minnesota Cities over proper procedure.

“We’re going to review the process, clean things up and move forward,” she said.

Despite the controversy, many residents are eager to see Boot and Lu’s become a reality. Skip Voge is particularly excited to see the new restaurant open and as for the parking spot, said it would be just about ideal for her husband Tom, who is handicapped.

“It was Clyde’s dream to have an ice cream store in Nerstrand,” Voge said. “The family has been a fixture in this town for 150 years and for the most part the community appreciates everything they do.”