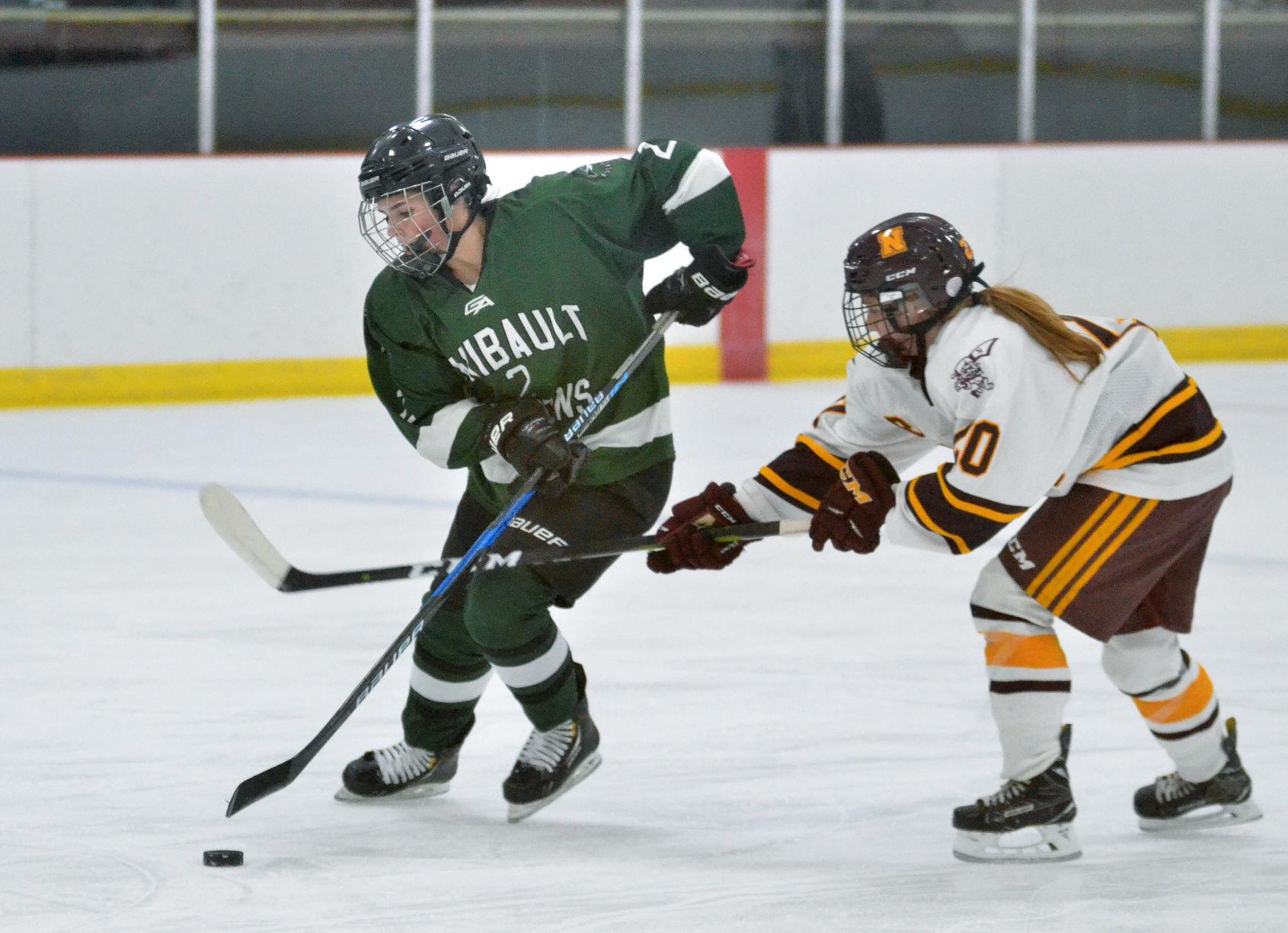 Faribault’s Rylie Starkson tries to skate past Northfield’s Cambria Monson in a game last season at Northfield Ice Arena. The two could become teammates this coming season if a cooperative agreement is reached. (Michael Hughes/Northfield News)

News
spotlight centerpiece
Increasingly diverse community has board looking to bring those voices to the table
mschwab  / By MISTY SCHWAB mschwab@faribault.com
05.14.20

Jefferson Elementary School students crowd around their principal, Yesica Louis. The district’s demographics have changed in recent years to the point where more than 50% of its enrollment are non-white students. That’s led the School Board to seek out voices from those communities when making decisions. (Daily News file photo)

It takes time and effort to form a deep understanding of different cultures, but the Faribault School Board is taking a step in that direction by developing a new position on the board.

During Monday’s virtual meeting, the board discussed plans to invite someone from Faribault’s minority communities to participate in discussions during School Board meetings. Like the student representatives, this person would not act as a voting member but instead provide an alternative perspective for board members to consider.

Community Education Director Anne Marie Leland has been working with the district’s cultural liaisons and Equity and Multilingual Coordinator Sam Ouk to develop recommendation for individuals who might fit the proposed role. At this point, the board is still working through a number of unknowns regarding the position.

“What I think would be important is that whomever is invited, they know this is our first attempt and we may make some mistakes, and none of it is intentional, and they are risk takers along with us.” said board member Carolyn Treadway. “We don’t know what it’s going to look like. We just want to embed this and have a greater understanding of various cultural issues.”

Faribault schools have become increasingly diverse over the last several years. While almost half of the district’s student population is white, according to the state Department of Education, 27% identify as Hispanic or Latino, another 24.4% are Black or African-American. Nearly one quarter of its 3,500 students is considered an English language learner, making awareness and an understanding of cultural differences a necessity for the district and leading the board to consider ways to incorporate those voices into its discussions — and decisions.

Board Chair Chad Wolff said the participating individual wouldn’t be able to vote without being an elected member of the board. However, he’d like whoever is selected to feel valued, get feedback from the board, become familiar with the decision-making process, and open the door for improved relationships between the board and diverse groups in the Faribault community.

Superintendent Todd Sesker said ideally he’d like to find someone already interested in the district, and hopefully someone whose children attend Faribault schools. He’d like to see the participant offer feedback and input to the School Board, and develop confidence to start participating in discussions without feeling “put on the spot.”

The School Board also discussed a rotation so different individuals can serve in the position throughout the year. Some board members suggested three to four months per person, but Wolff thought six months would allow more time for the selected individual to become familiar with the processes and develop a connection with the board.

If language presents a communication barrier, Leland pointed out a translator would need to attend meetings as well. In deciding what the outcome might look like for both the School Board and the added participant, Leland said she’s drafting somewhat of a job description.

“I know that board members present have met with families, so we’re building on those successes and really taking it to another level,” said Leland. “ … This is on the back of my mind that this is going to be a potentially positive position.”

One hopeful outcome of the position is to encourage community members from diverse backgrounds to file for School Board. The board previously discussed other methods to attract diverse candidates, such as the possibility of hosting a question-and-answer session for those interested in serving on the board. School Board member John Bellingham said he still plans to offer an informative presentation for the community, tentatively planned for after Independence Day.

The Faribault School Board plans to decide on a selection process and description for the honorary position at an upcoming meeting, either May 18 or the first work session in June.

Senate District 20 was home to the only contested nomination race on the DFL side. In the end it was barely a contest, with Navy Veteran and Educator Jon Olson of Cedar Lake Township breezing past Northfield small business owner Davin Sokup.

Olson grew up in Minneapolis and enrolled in the U.S. Naval Academy in 1986. He spent 21 years on active duty as a naval intelligence officer stationed in countries including Somalia, Iraq and Bosnia before retiring in 2011.

With his wife Melissa, Olson moved to southern Scott County in 2012. Since then, he’s taught courses in Carleton College’s Political Science Department as well as at Metropolitan State University in St. Paul.

Olson has stayed active in the community and volunteered for several veteran focused nonprofits, but this is his first run for political office. He says he decided to run because he feels called to service once again, with the state facing significant challenges.

Olson said that as he’s talked to constituents across the district, the number one issue on their minds is often health care. While Minnesota has a lower uninsured rate than most states, gaps remain, particularly in rural areas, and have been highlighted by the pandemic.

“I’m open to a variety of different options (for reform),” he said. “We need to deliver a program focused on patients, so that patients can get the care they need when they need it at a price that is affordable.”

While Senate District 20 may be centered around Northfield, a majority of the district is rural and agricultural issues are at the top of many voters’ minds. Olson said he’d focus on measures to boost small family farms.

Local farmers have been hit hard over the last several years by falling commodity prices and less than ideal growing conditions. 2020 was expected to be a bounce back year for production and stronger markets, thanks to a reduction in conflicts with key trading partners.

The global pandemic has thrown a monkey wrench into those plans. Corn farmers have been hit particularly hard, as the price of oil has crashed amid falling demand and an international oil price war, taking the price of ethanol down with it.

“We need to do a lot more to help small family farms,” Olson said. “Frankly, I’m not sure that the whole ag system is really operating in a way that is truly fair to farmers.”

Olson also highlighted the issue of education. He said that given the state of the modern economy, making the investments needed to ensure that the state’s education system is among the world’s best isn’t just a luxury, it’s a necessity.

While he disagrees with Sen. Draheim on some policy issues, Olson said that he plans on running a wholly positive campaign. He promised not to run an attack ad against the incumbent and said that if outside groups do so, he will denounce them. 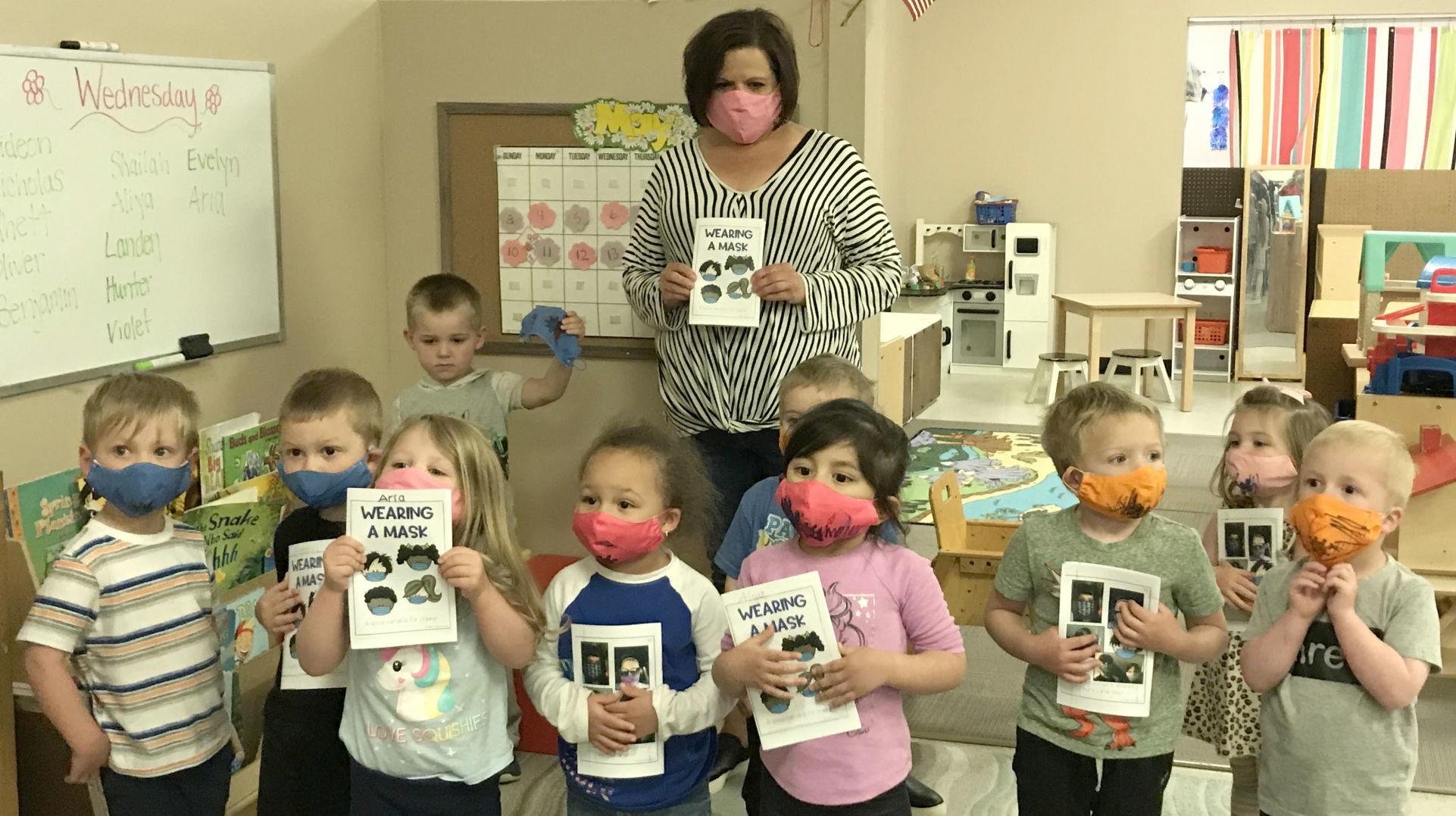 The preschool class at A Child’s Delight Too decorates their masks made by Kay Dudley. The masks also include the center’s logo. Preschoolers read and took home the booklet, “Wearing a Mask” by Autism Little Learners.

Bridgewater Township successfully held the first election in Rice County of the coronavirus era on Tuesday, electing two new members to its Board of Supervisors.

In order to facilitate safe voting amid the pandemic, the election was conducted in a fully “drive thru” format. Residents entered the township hall parking lot at the south end, stopped by the first tent to sign the roster, and proceeded to the second tent to fill out the ballot.

The special election was necessitated by a referendum held in March. Then, township voters voted by an overwhelming margin to increase the number of board Supervisors from three to five, becoming the first Rice County township with an expanded board.

Bridgewater is one of Rice County’s most populated townships and its government has become increasingly active. With more supervisors on the Board, proponents of the measure reasoned that governing responsibilities could be spread out more smoothly. Bridgewater Township conducts its own planning, has taken an active role in stormwater management and earlier this year decided not to incorporate, a move that had neighboring Northfield and Dundas on edge.

On Tuesday, Thomas Hart and Tracy Jonkman were elected to fill the newly created positions. If they want to stay on the Board, they’ll need to start their re-election campaigns soon, as both positions will be on the ballot again in March.

Jonkman is somewhat of a newcomer to the area, having moved to Bridgewater seven years ago. With her husband, Nate Watters, she started Keepsake Cidery, producing high quality ciders from an on-site organic apple orchard.

Jonkman also works as an emergency medical physician and is raising two children, Tristen and Fiona. She said that she decided to step forward for the position because she wants to give back to the community she intends to make her long term home.

“We are really invested in Bridgewater Township, and we want to see it thrive long into the future,” Jonkman said.

A U.S. Army veteran, Hart has called Bridgewater Township Home for 32 years. With his wife Kathy, he’s raised two children locally and worked at Land O’Lakes for 27 years, before taking a job with Cabela’s in Owatonna.

A former election judge in the township and an active member of Northfield American Legion Post 84, Hart has long been involved in the community. On the Board, he said that he hopes to be a strong representative for township residents at a time of transition and turmoil.

“I’m going to do my best to learn the ins and outs of my position,” he said. “I’ll do my best to follow the wishes of the constituents who voted for me.”

THE VOTES ARE IN

A total of 162 votes were cast in the special election to elect two Bridgewater Township Supervisors. The results were as follows: