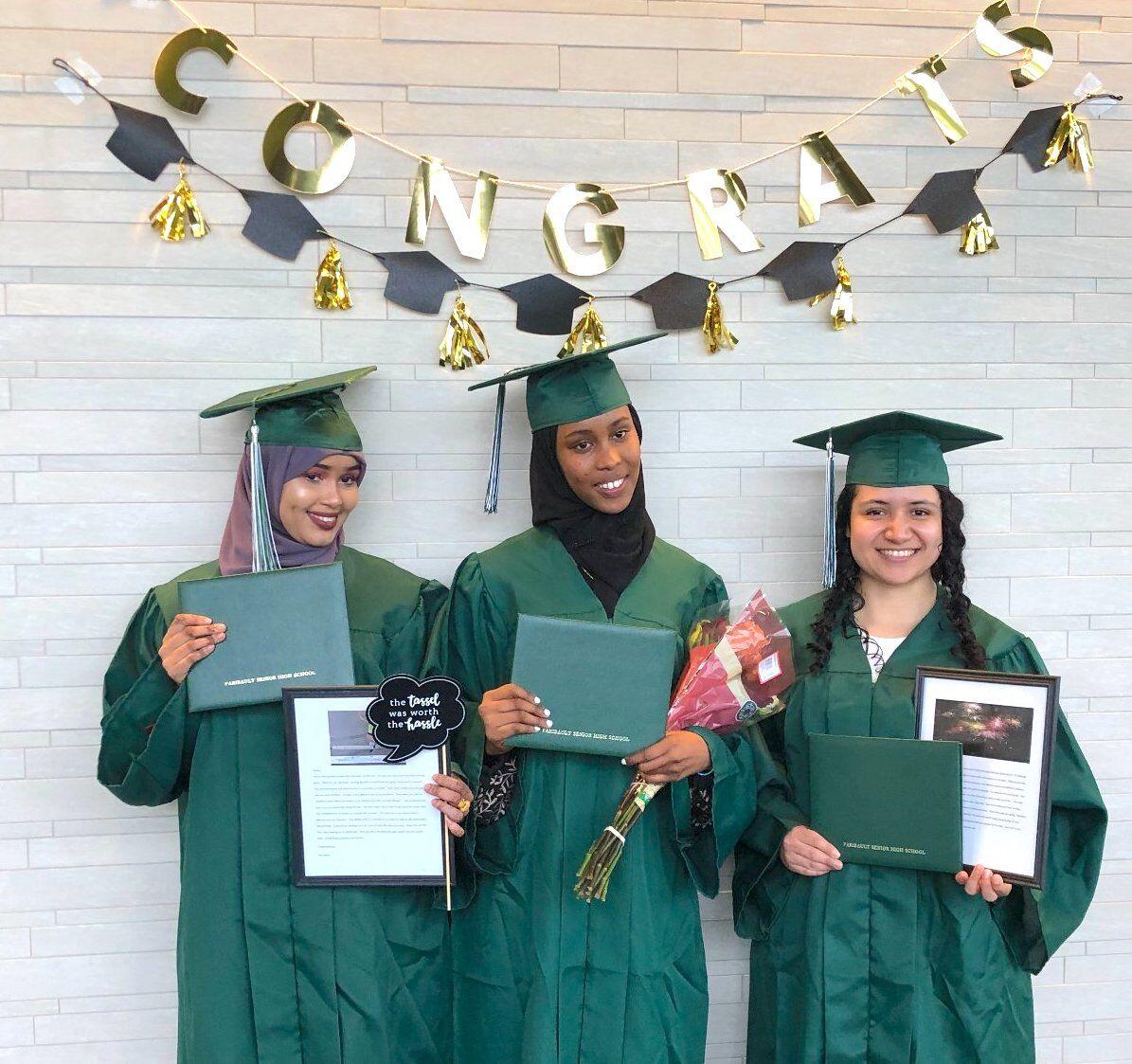 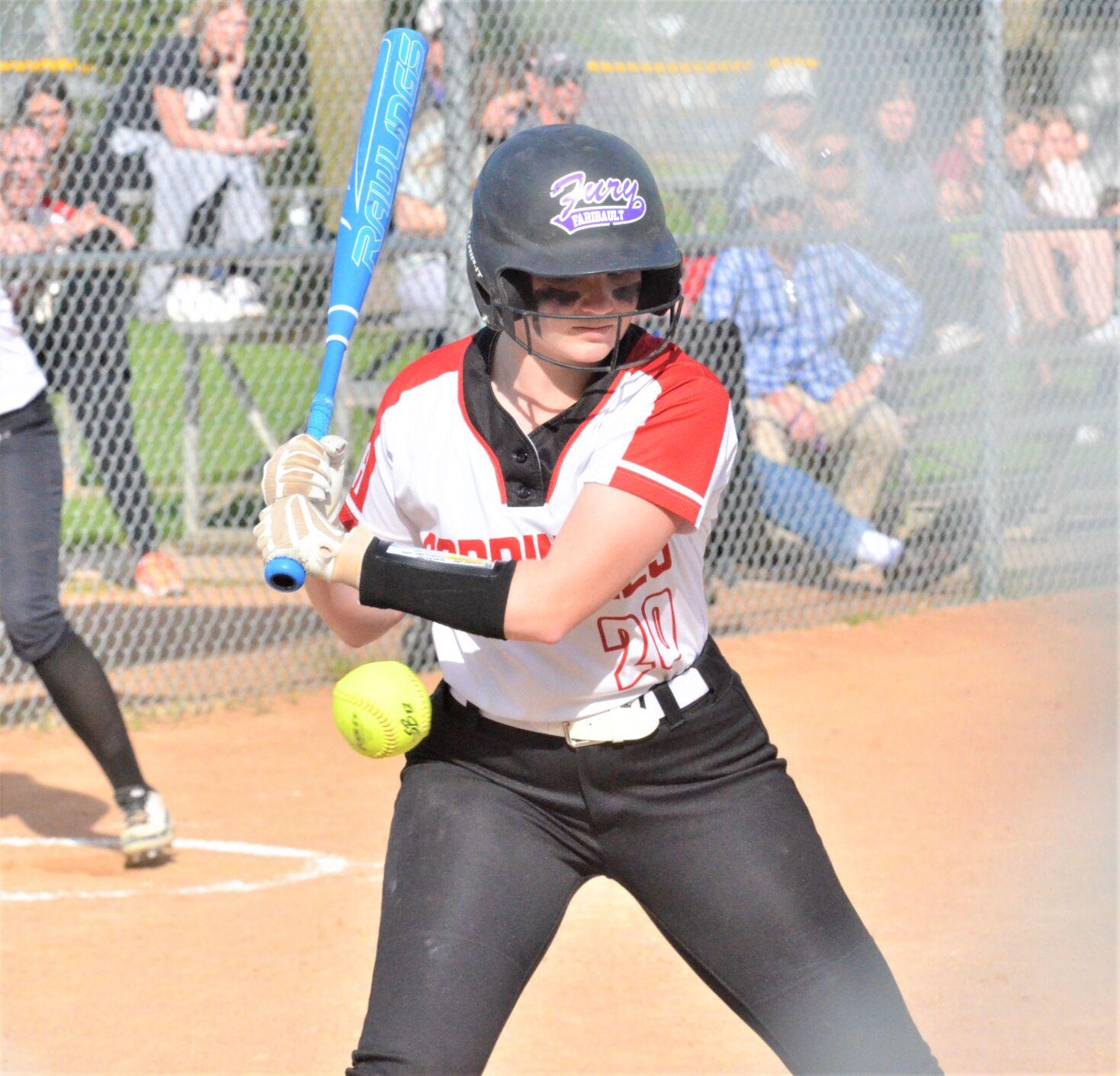 Bethlehem Academy’s Morgan Wilson takes a pitch during Monday’s playoff game. Wilson’s impact was imperative on Thursday as the freshman hit and pitched the Cardinals to play another day. (Michael Pappas/southernminn.com) 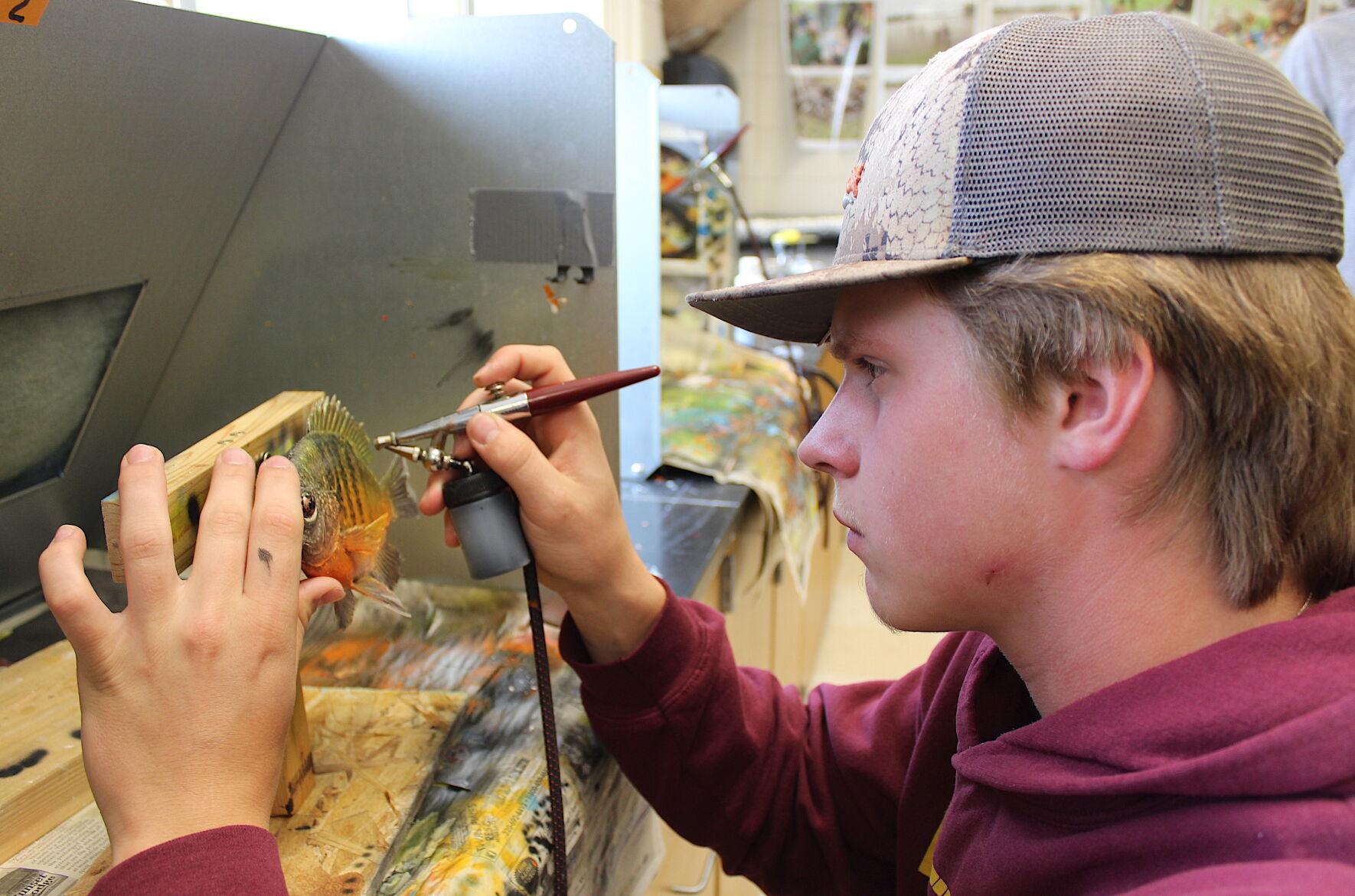 Ayden Qualey applies a coat of paint to a sunfish during the taxidermy class at Faribault High School. (Tom Nelson/southernminn.com)

For most people, their tales of fishing success are usually limited to a few social media posts or a well-crafted story around a campfire.

An exception to that rule would be the 22 local students who no can display their catches on the wall thanks to the popular fish biology and taxidermy class offered at Faribault High School.

The elective course has no prerequisites and is offered to students in ninth through 12th grade. It is taught by biology teacher Peter Jacobson.

“We are incorporating some biology with the class, but the primary focus is on taxidermy,” Jacobson said.

The course takes the students through the basics of taxidermy and teaches them how to prepare a fish to be preserved and turned into a display mount. 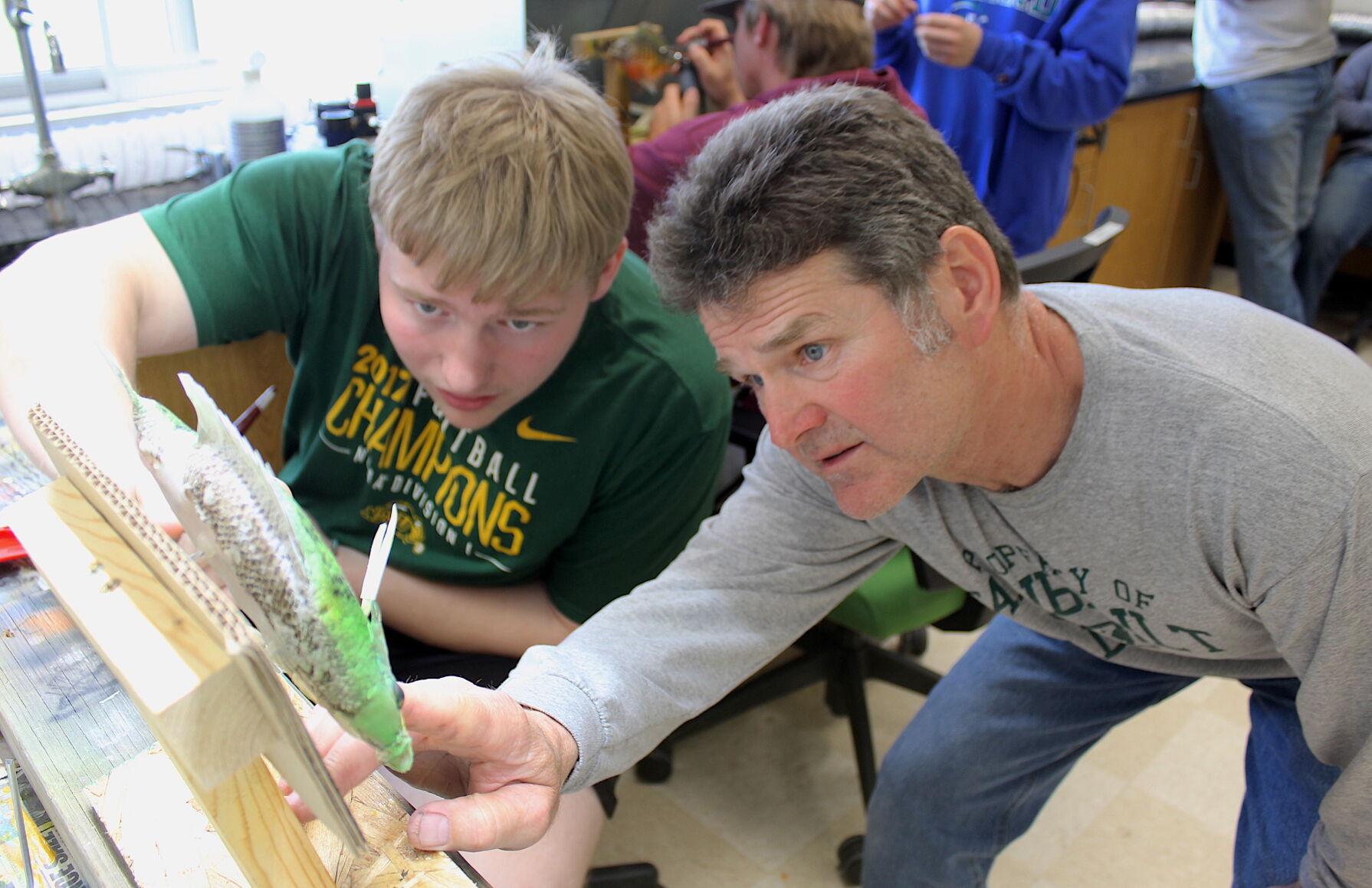 An avid fisherman himself, Jacobson helped create the class two years ago when the school district moved to a seven-period day.

“That seven period day was looked at as an opportunity to provide students more choices and more opportunity to explore their interests,” Jacobson said. “This is a class that I proposed to the administration since I thought there may be a big interest to our students. And the interest was there right away. Even looking ahead to next year, the numbers are very good as well.”

Many students in the class have a strong interest in fishing and outdoor activities, while others are relative newcomers to the sport or were drawn to the art aspects of taxidermy.

“I’ve had a few students who said they might explore this as a career, but for most of them this is an interest and one more step in the outdoor world for them,” Jacobson said. “For me, my goal is for the students to gain confidence in trying something new.” 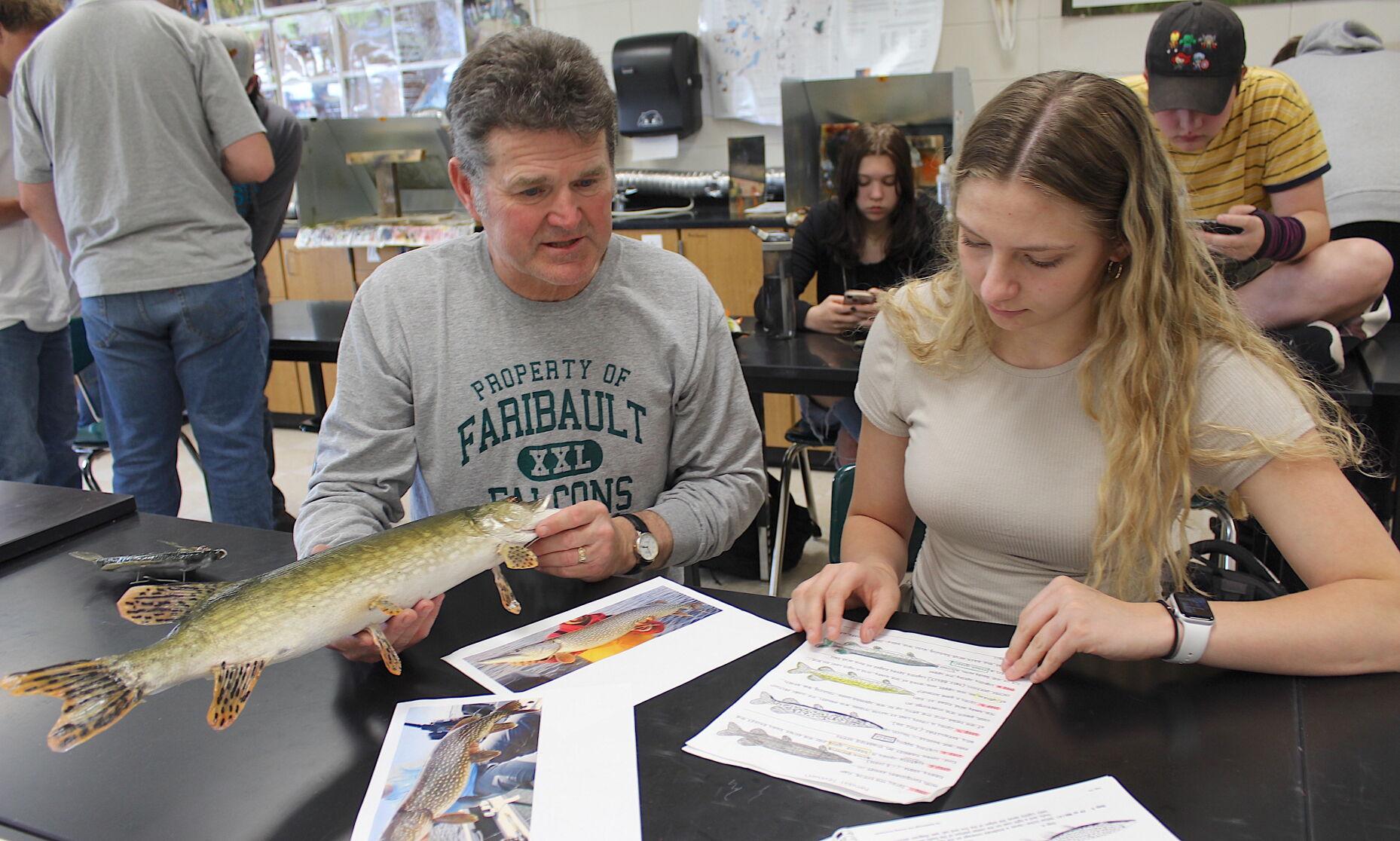 Jacobson, who is a veteran teacher, is also learning the craft of taxidermy along with his students.

“I am not an expert taxidermist. I am learning along with the students,” he said. “I’ve been toying with it off and on for a couple of years, and about 30 years ago I taught it to middle school students. I had to retool myself to teach this class.”

Unlike his first time teaching taxidermy many years ago, Jacobson has been able to collect tips and information with research on the internet.

“I spent a lot of time with the internet on and a fish in my hand,” Jacobson said. “I came up with a system and a process that worked really well. There is one particular website (freetaxidermyschool.com) that has a series of how-to videos and I made that available for the students.”

FHS student Isaac Yetzer is an active outdoorsman and hits the local lakes on his boat. He used two fish he caught (a bass and bluegill) in the taxidermy class.

“I really enjoy fishing and I saw this class and it sparked my interest,” Yetzer said. “The first two fish I did, they turned out a lot better than I thought. It really surprised me how much I like it, so I definitely want to continue this.” 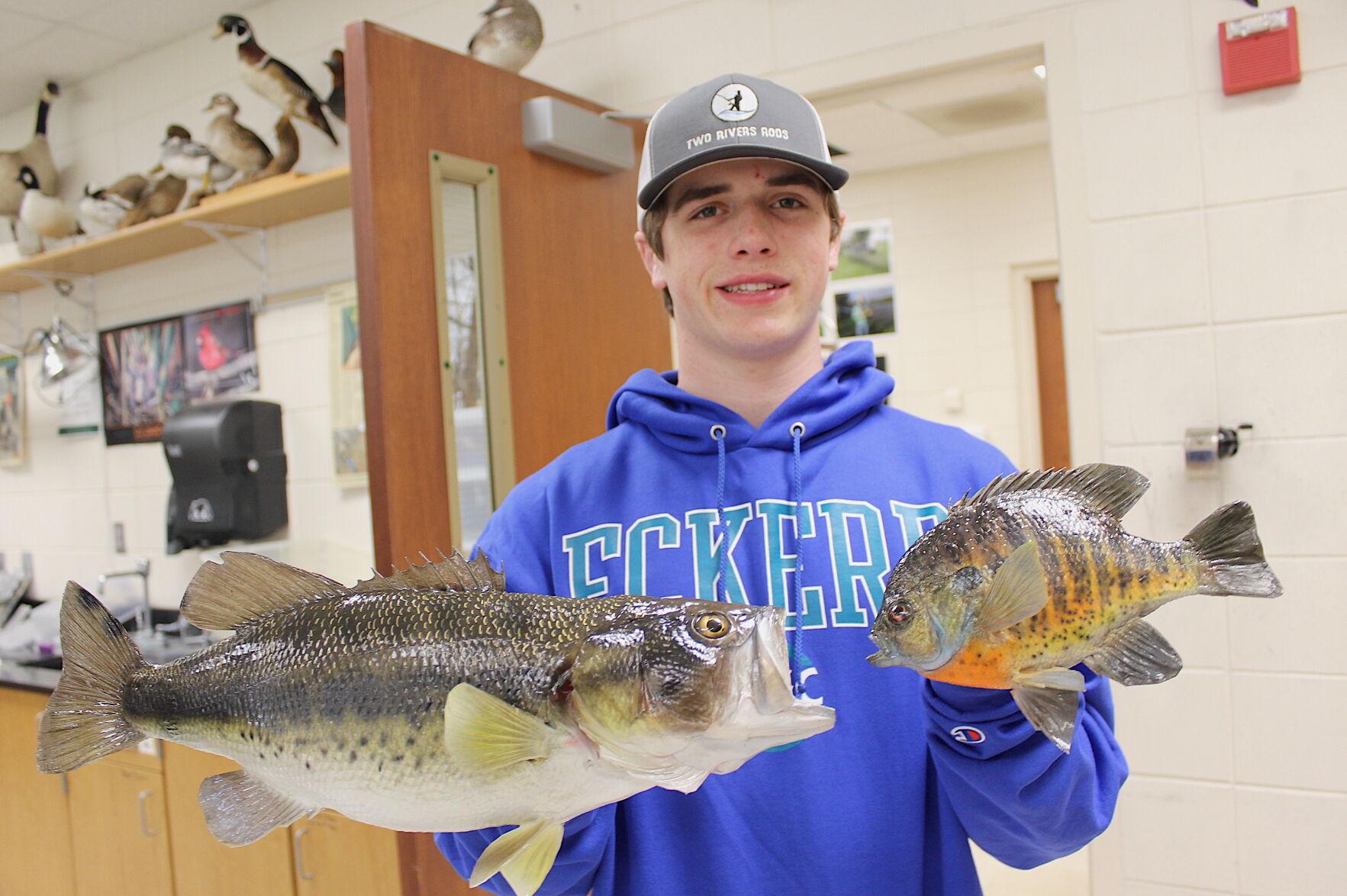 Jacobson said his students have discovered Faribault lakes have some nice crappies, “but they are hard to mount because their skin is very thin and the scales fall out easily.” The perch and walleye proved to be the easiest to work with due to their durable skin and fairly simple painting process.

“We were fortunate this year because my son gave us a limit of perch from South Dakota that were very big and they were excellent for the students to work with,” Jacobson said.

Before the students begin the process of creating a mounted fish, Jacobson has the students register each fish. This includes information on the fish’s length, weight, where it was caught, who caught it and if that person was following the state’s fishing rules and regulations. The next step is to remove everything from the inside of the fish.

The students use a block of styrofoam to create a form onto which the skin and skull is attached. They take measurements of the fish to make sure it is an accurate replica of the real fish and then carve the form out with a knife or with a band saw. A final sanding of the styrofoam form is then applied before the skin is attached to the form with pins.

Throughout this process, which can take up to a couple weeks depending upon the student’s ability to create a form, the fish skin is kept in a Borax solution and refrigerated in order to kill bacteria and prevent insects from consuming the skin.

To complete the process, students apply paint to the fish in order to replicate its natural colors in the water. The class uses images found in books, taxidermy guide books and online to help recreate the proper fish colors. This also provides the students with a chance to learn artistic techniques.

“This class provides a lot of problem-solving skills for the students,” Jacobson said. “One of those is learning how to use an air brush, which is a challenge and an art form in its own. Mixing the colors and trying to match the natural colors of the fish is a challenge and fun.” 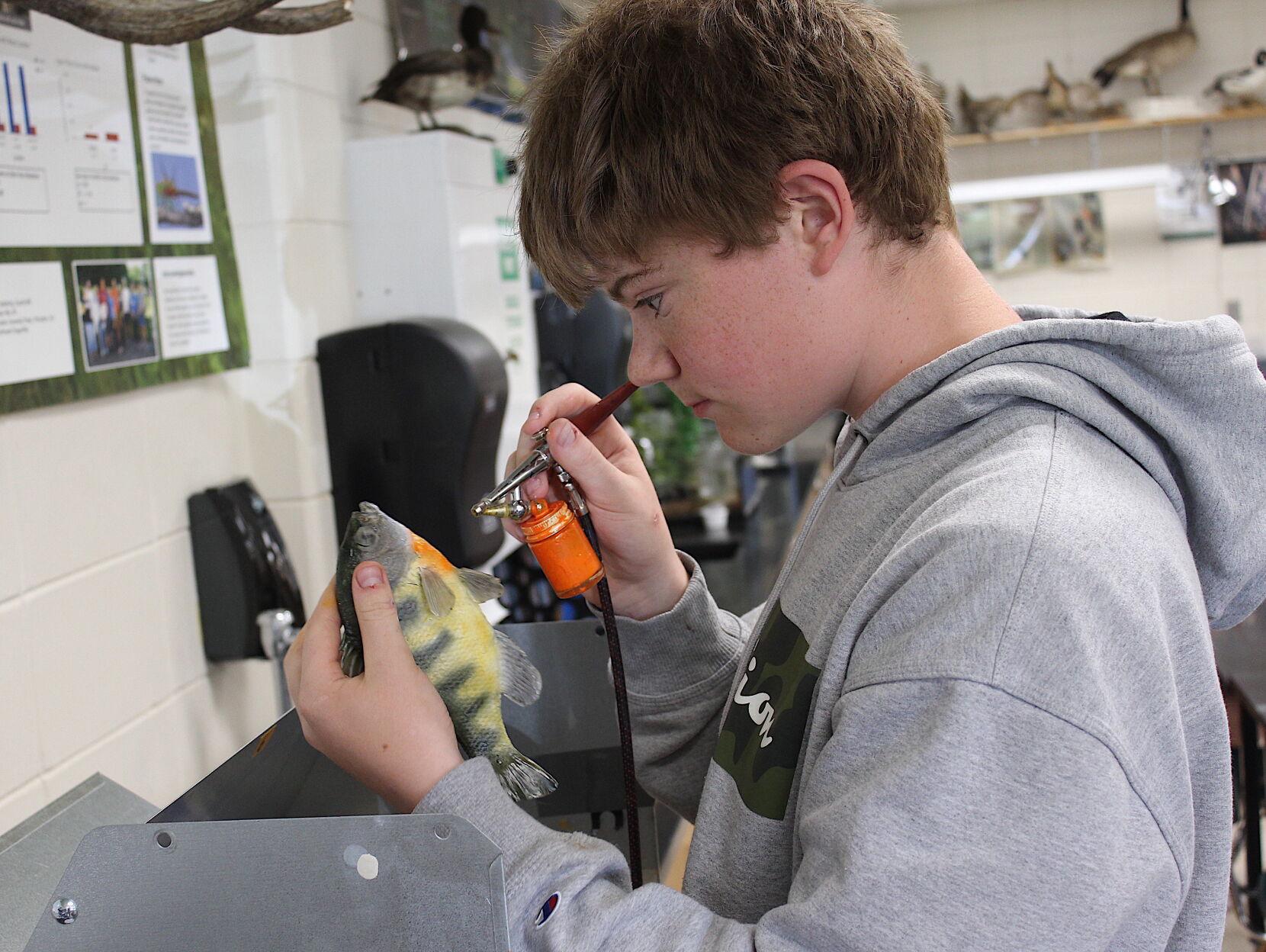 At times, the students have been faced with less-than-desired results when working with their fish. But Jacobson just points to a favorite mantra used in the class.

“We have a saying here: ‘If you make a mistake we can fix it,’” Jacobson said. “We’ve had to repair fish. We’ve had to take all the paint off a fish and restart several times. Instead of saying ‘I messed up and it looks terrible,’ I tell them: ‘No it doesn’t. It looks like the first fish you’ve painted and guess what? You get to paint a second one.’ And they get better at it.”

Jacobson believes the interest in the class is due in part to the fact that it provides students with a chance to seek out their interests and be with others who share an interest in fishing, art and the outdoors.

“This type of class is something that makes them want to come to school,” Jacobson said. “During COVID when it was optional to come to school or stay home, my fish kids came to school. They wanted to be here because they want to work on their fish.”

One of the fish used in the class this spring was a northern pike recovered from a fish-netting survey done in the fall at a local lake by Jacobson’s wildlife field biology class with help from the DNR. Unfortunately the fish died in the process, so it was saved for use in the taxidermy class this year.

FHS student Kendal Severson, a student whose taken both the wildlife field biology class and the taxidermy class, then created a lifelike wall mount from the fish. Her work with Jacobson in the two classes has inspired her to pursue more biology studies after she completes her high school tenure.

“If I am being completely honest, I took this class for an art credit. But I also learned a lot of things in the class and am grateful that I had the opportunity to do this, because it is not something I would ever have done before,” Severson said.

Jacobson is retiring at the end of the school year. He taught for 33 years, 26 of them at FHS. A new teacher has already been hired who will teach the taxidermy class next year. 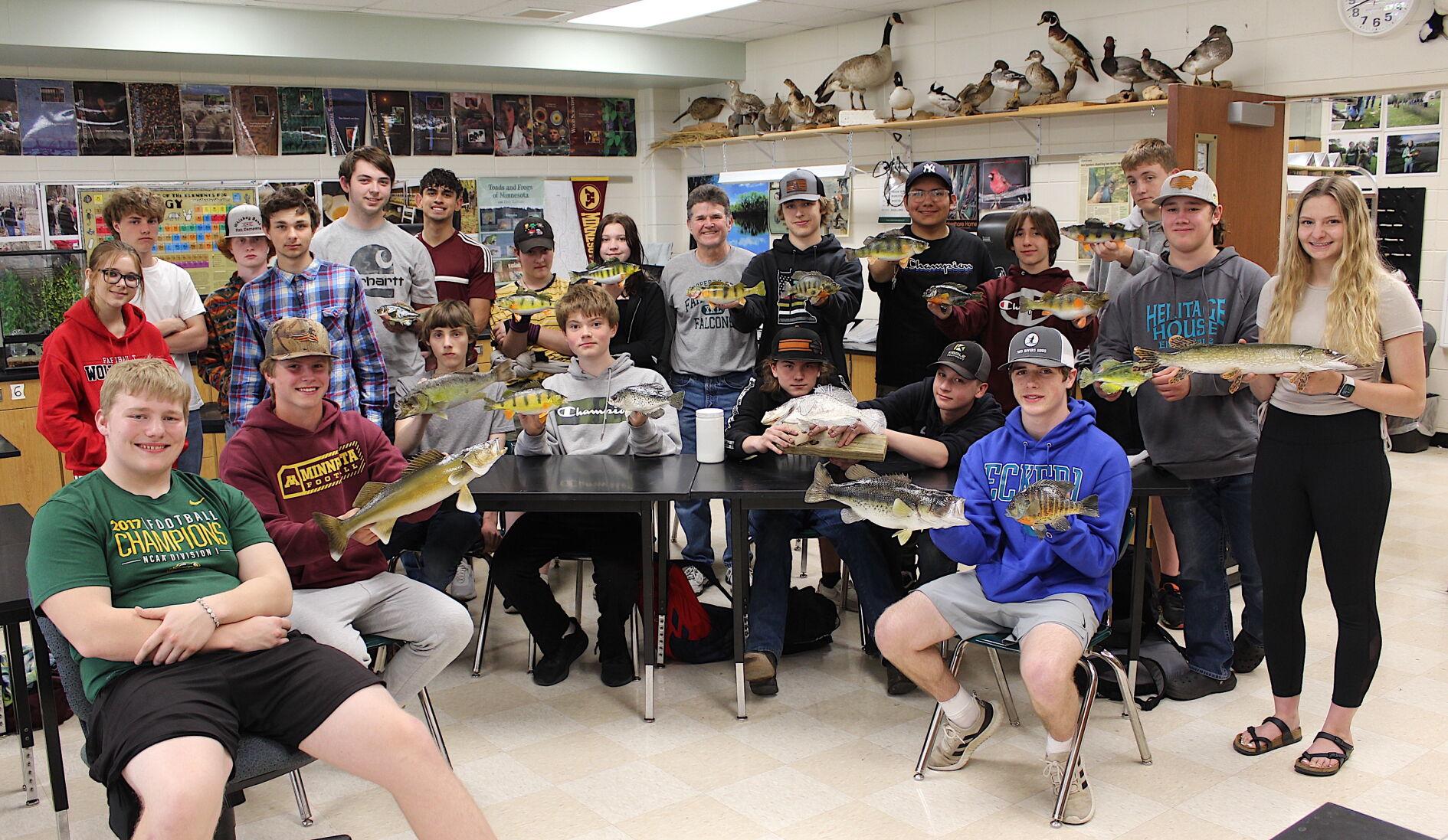 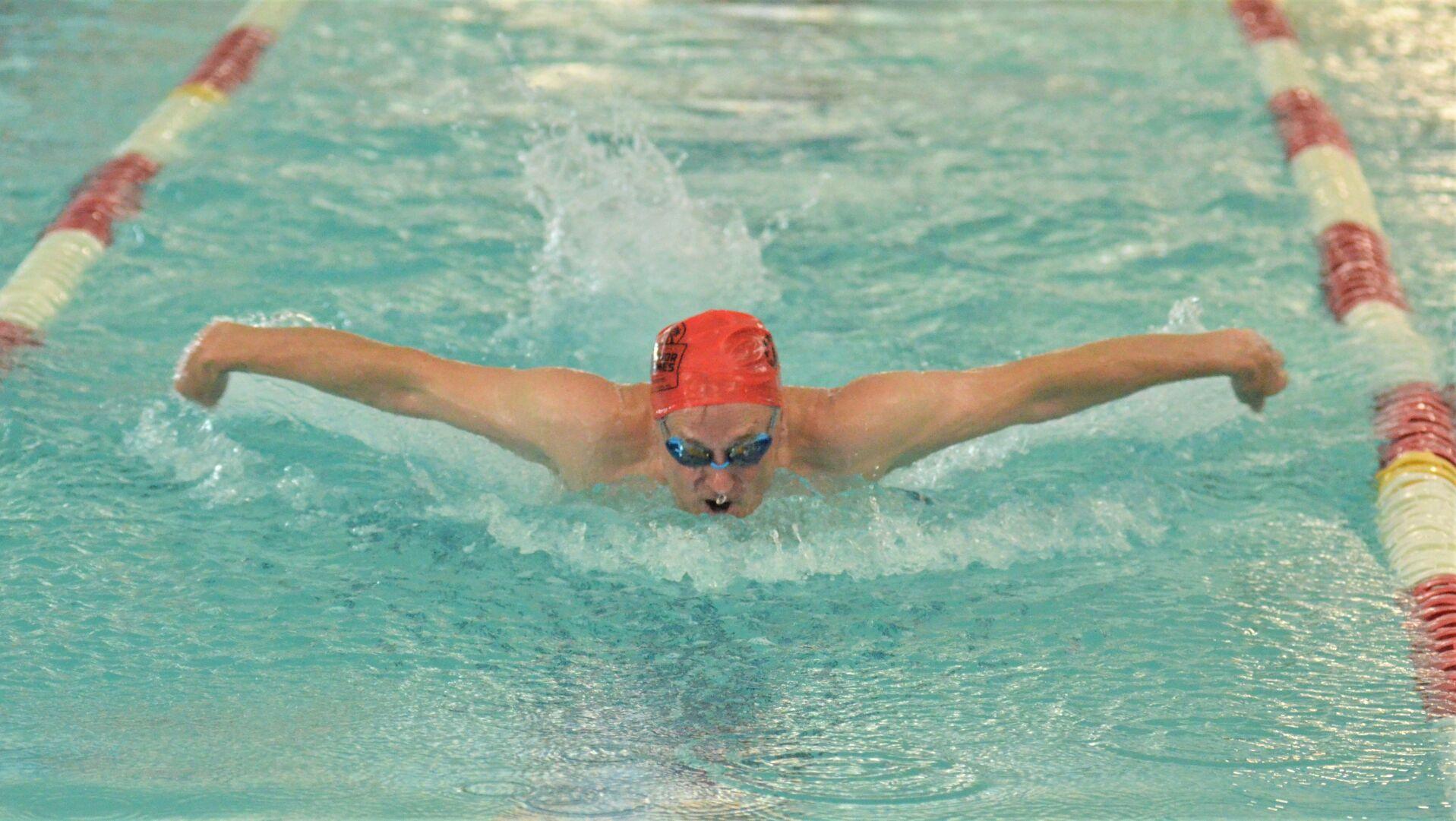 Faribault native Robin Kleffman began a swimming career over 70 years ago and is showing no signs of slowing down. (Michael Pappas/southernminn.com)