There are even more benefits when it comes to exercising outdoors. And that is something the Faribault Anytime Fitness staff hopes to show community members with their outdoor workouts. 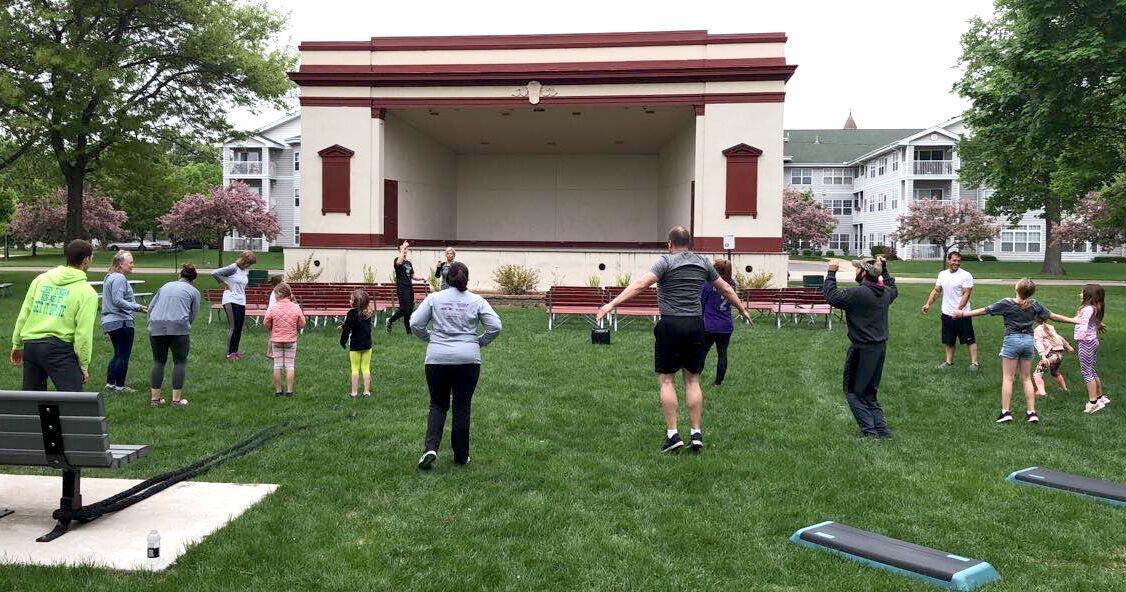 General Manager Kris Johnson said corporate introduced the idea, and all clubs could decide whether or not they wanted to offer it since they are all independently owned and operated.

“I thought it was a cool idea, and that it would be a great time for our members to bring their kids with, because anyone can participate,” Johnson said.

The workouts began a few years prior to COVID and have been taking place annually every year since, with the exception of 2020.

Johnson said the Saturday workouts are a good way to promote health, get outdoors and be outside.

“We’ve been pretty lucky. We typically end up with good weather,” Johnson said.

Medical professionals say outdoor exercise can help ward off seasonal affective disorder, depression and anxiety because sunshine naturally increases serotonin, a hormone that affects moods. Exercise itself produces endorphins, another hormone that boosts your mood and reduces pain is added to the mix.

Johnson is a lover of the outdoors, and with this spring a little more slow-coming, she said she appreciates the nice weather even more now.

A wide range of exercises are included, Johnson said, to make each day different. Some common exercises can include squats, lunges, burpees, tire flips and the use of bands. 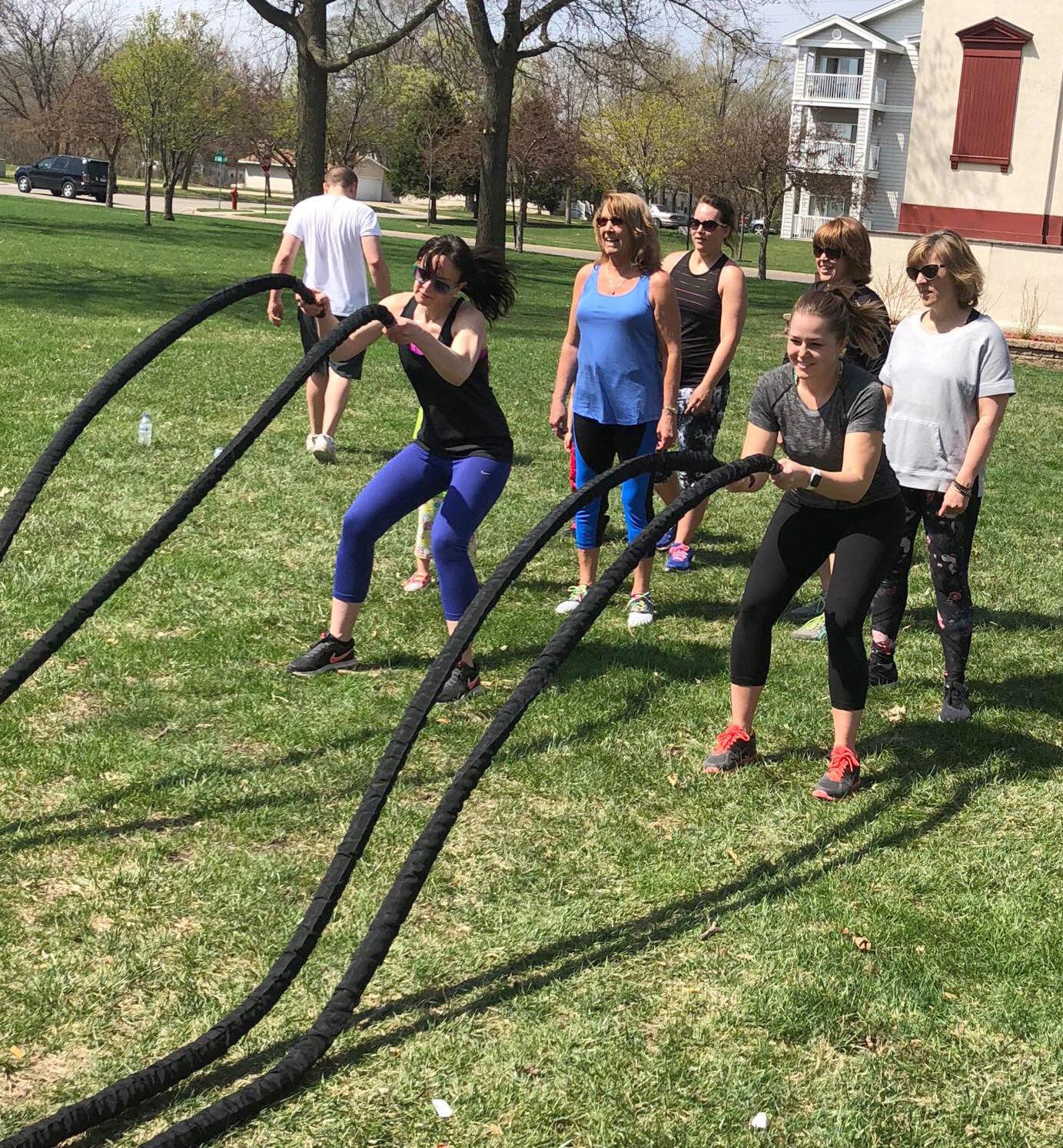 Attendees use battle ropes at a previous Saturday workout at Central Park. (Photo courtesy of Anytime Fitness of Faribault)

Multiple staff members participate in each workout, from the full-time training manager to part-time trainers. Oftentimes, Johnson said people new to the club will attend, so having more staff on board allows them to show attendees what to do and how to do it correctly.

The attendees include both Lifetime members and non-members. Members are welcome to bring their friends, children and grandchildren.

“It’s not about getting someone to join the club, it’s just about having fun and getting people outdoors,” Johnson said.

Jamie Johnson, who is the training manager at the Faribault location, said she typically leads the classes and is joined by another trainer or two helping out in the crowd to make sure everyone’s form is correct. 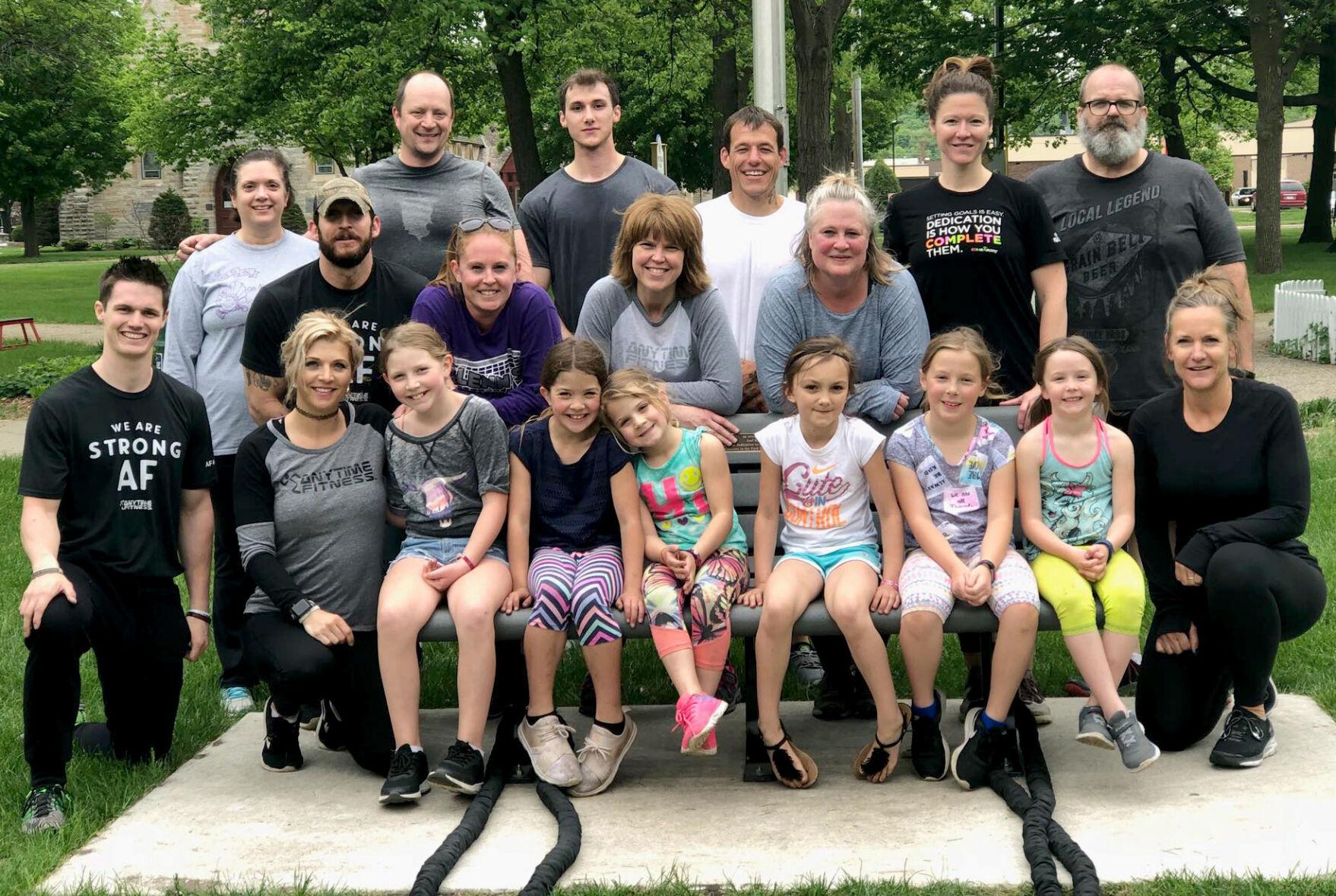 A previous year’s group of attendees after a Saturday workout in Central Park. People of all ages and abilities are invited. (Photo courtesy of Anytime Fitness of Faribault)

She sees the Saturday workouts as a way to give the community a glimpse of what trainers offer in the gym.

“Classes are open to all ages, and people of all abilities,” Jamie said. “People are anywhere from 18 to 74 in my training. Anything can be modified. It’s all about keeping people active.”

Jamie said the Saturday workouts are geared more toward having fun, and she also enjoys being able to workout in the great outdoors.

“It’s nice to invite the community to be active,” Jamie said.

Upcoming programs will be offered in the summer for the general public and for high school students at a reduced rate. See facebook.com/AnytimeFitnessFaribault for more information.

Finding areas of agreement between Senate Republicans and House DFLers on taxes this session hasn’t been easy.

With a record-setting surplus, both parties and Gov. Tim Walz want to spend some of it to reduce what the state collects. But they take vastly different approaches: Republicans favor tax-rate reductions that would benefit everyone who pays personal income taxes, while the DFL has proposed a series of targeted tax credits for families with children, child care and student loans.

But at least in the big type there is one sliver of commonality: Both the House and Senate propose changes to how Minnesota taxes Social Security income that would have retired residents pay less.

But in case anyone thought even that was going to be easy, each side gets to that result in different ways — and with different price tags.

The Senate GOP tax bill would end all state income tax collections on Social Security benefits, a change that would reduce tax collections by $550 million a year and would take effect with the current tax year.

“There is something that I think just about everyone on this tax committee has proposed at one time or another, and that is removing the double taxation on Social Security benefits,” Senate Taxes Committee Chair Carla Nelson told her committee last month.

“Our state is one of a handful that will tax those benefits,” said the Rochester Republican.

Whether Social Security taxation is double taxation is subject to debate and interpretation. Proponents of eliminating the tax make that assertion frequently — along with the undisputed fact that only 13 states collect any taxes on Social Security, though many of those, like Minnesota, do exempt taxpayers at lower income levels. Social Security benefits also remain subject to federal income taxes, depending on the overall income of the taxpayer.

The House DFL would not eliminate all taxation on Social Security benefits but would increase the income thresholds for who pays those taxes. It would cost the treasury $114 million a year, growing to $135 million by 2025.

The fight over flight

The contrast in plans displays the philosophical — and partisan — differences between the parties. Republicans maintain that seniors have paid into Social Security for years and deserve its benefits without being taxed for them.

That is a popular position among senior residents — and senior voters. And some lawmakers argue that the taxation of those benefits contributes to retiree flight to states like Arizona, which doesn’t tax those benefits, or Florida, which has no state income taxes at all.

“It’s not the only reason people leave the state when they retire, but why give them any reason?” said Rep. Tony Jurgens, R-Cottage Grove.

Yet Mark Haveman, the executive director of the Minnesota Center for Fiscal Excellence, doubts the change alone would affect where retirees live. That’s because higher-income seniors would still face state taxes on the bulk of their income which comes from sources other than Social Security. “Your retention bang for the buck would be minimal if it would exist at all,” Haveman said.

DFLers, including Gov. Tim Walz, think any tax benefits should go toward helping middle- and lower-income seniors and not include wealthier retirees whose income includes much more than Social Security. Currently, 55% of the 400,000 Social Security recipients in Minnesota pay no taxes on those benefits. The bulk of the GOP-proposed tax elimination would benefit taxpayers who are receiving $100,000 or more in total income, according to a Senate fiscal analysis.

The other part of the Senate GOP tax cut — a reduction of the first-tier tax rate from 5.35% to 2.8% — is less regressive, with half of the benefit falling to taxpayers earning $100,000 or less.

The House’s treatment of Social Security taxes continues a trend of gradually increasing income thresholds for when taxes are due to the state.

An analysis of key segments of House Taxes Committee Chair Paul Marquart’s plan notes that about 282,000 tax returns would see an average savings of $397 under the DFL plan. Nearly all of those savings would be seen by households with incomes less than $100,000, and none would fall to filers earning $150,000 or more.

Walz said he supports increasing the income levels where taxes are eliminated or greatly reduced, but he doesn’t favor total cancellation of the tax because of the way that would advantage wealthier retirees.

Still, after another closed-door session with legislative leaders and budget staff Monday, Walz said he thinks there is room for compromise.

“We need to keep lifting that to make sure that those in the middle are not seeing an increase,” Walz said.

But on Tuesday Senate Majority Leader Jeremy Miller disagreed with Walz’s assertion that wealthy retirees benefited the most from the Senate’s elimination of the tax.

“We’re hearing from senior citizens every single day on how detrimental this tax is and how meaningful it would be to provide them this much-deserved tax relief,” the Winona Republican said.