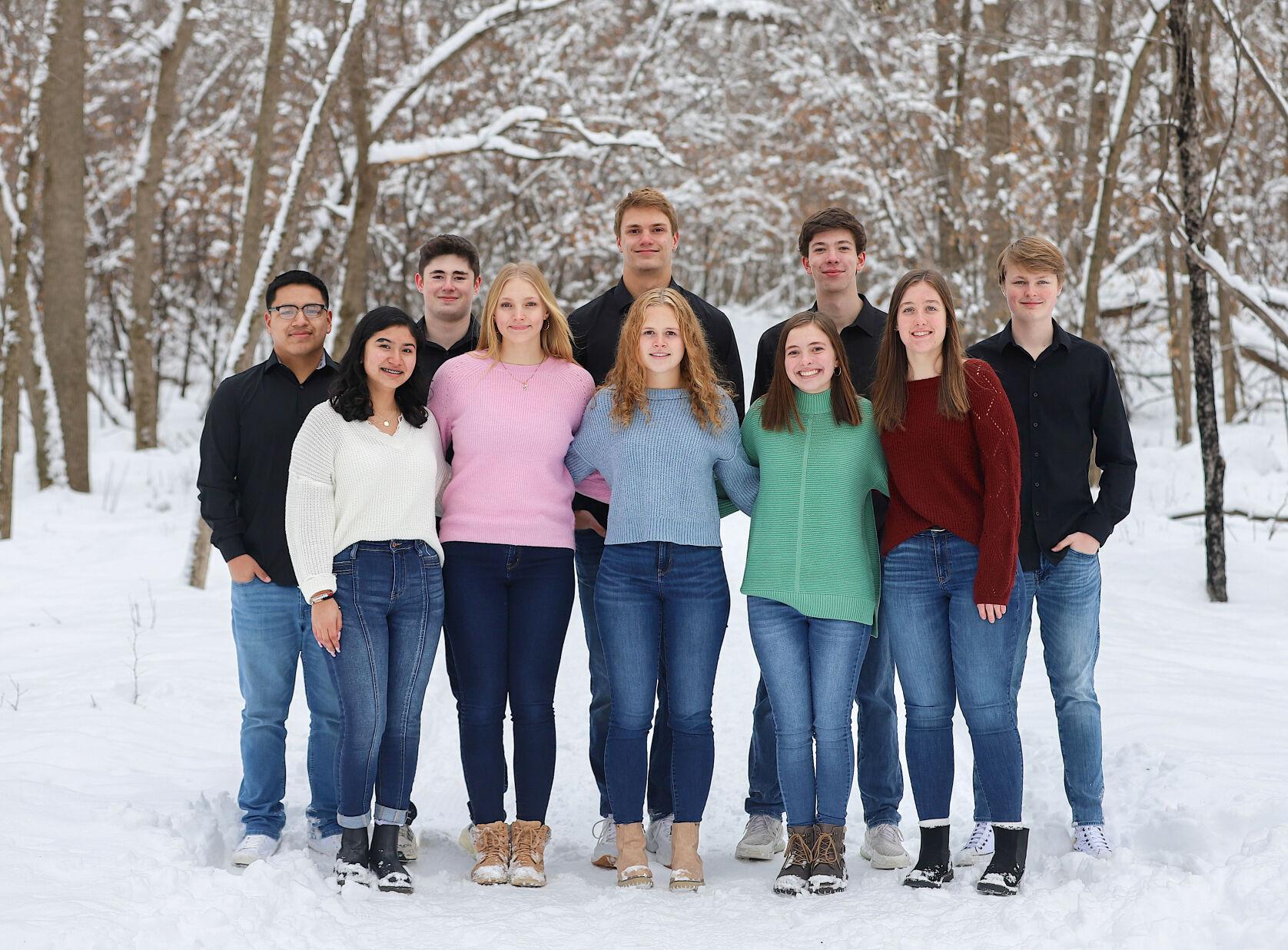 Mona Kaiser was honored as the grand marshal of the Faribault Heritage Days Parade in 2018. (File photo/southernminn.com)

In the new building addition, sits a state-of-the-art conference room. The room has a “hearing loop,” which allows folks to tune their hearing aids to a certain frequency to better hear guest presentations. (Colton Kemp/southernminn.com) 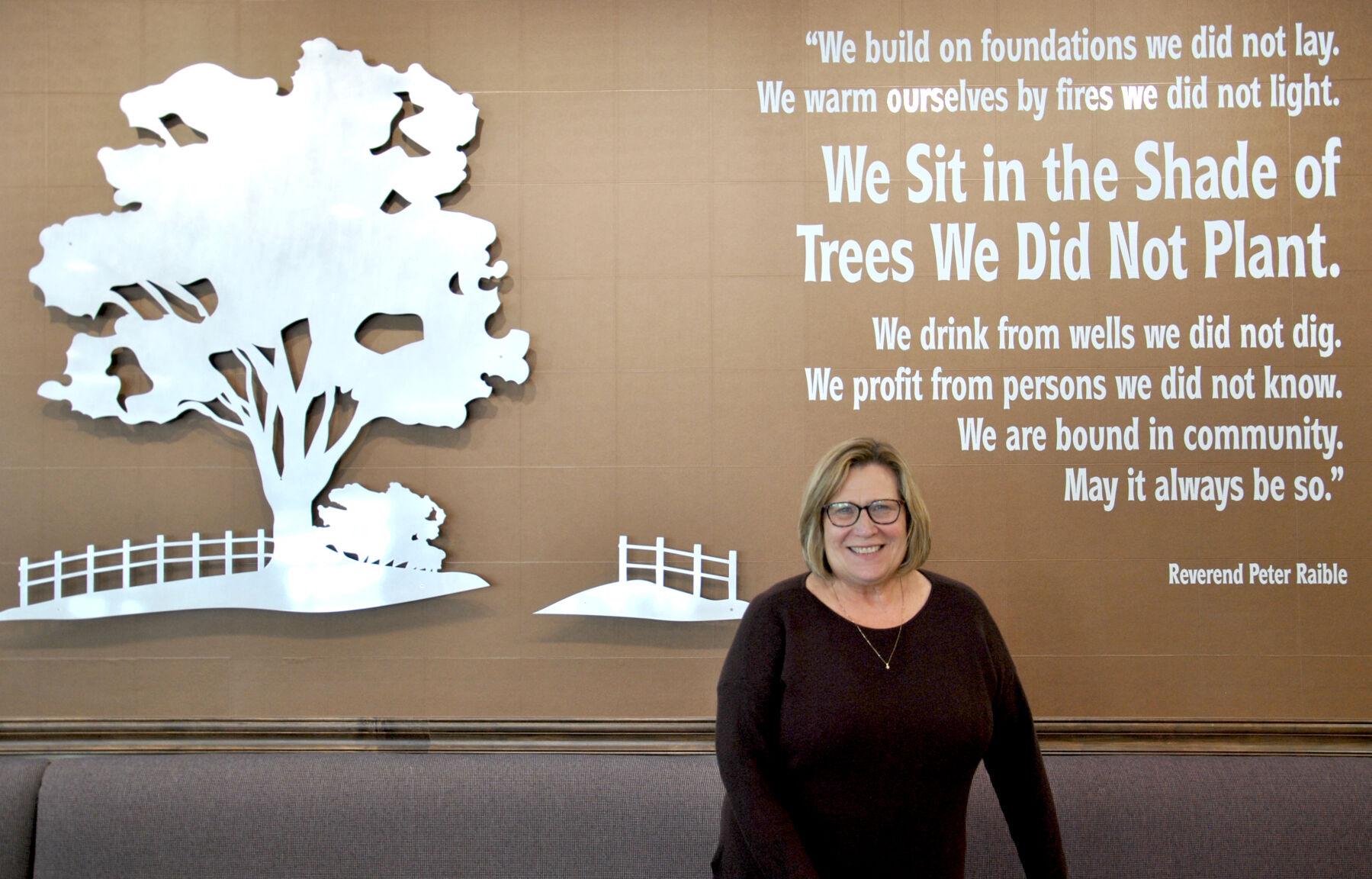 Buckham West senior center Director Mona Kaiser is “finally really ready” to retire after March 24. She stands next to a quote, which she said a board member told her during the planning process of the Buckham West building addition. (Colton Kemp/southernminn.com)

Mona Kaiser has a vision of herself, freshly retired from her position as director of Buckham West. It’s early summer and she’s clutching a warm cup of freshly brewed coffee in the early morning hours on the deck of her family’s lakeside cabin.

After exactly 20 years as the director, she said she knew it was time to retire.

“People would always say, ‘Well, you’ll know when it’s time,’” she said. “I would think, ‘How am I going to know? I don’t know. It’s scary. What am I going to do with my time? How is the money going to hold up? I’ve worked my whole life.’ But there was this moment …”

One day, in early December, she was having a conversation with someone whose husband was ill.

“They were meeting with hospice later that day, and I asked if they were retired,” Kaiser said. “And she said, ‘You know, we never got around to it.’ That was a moment for me. I never want to not retire because I never get around to it.”

She wrote her letter of resignation, announcing she will retire in March. She even shed some tears as she read it to the board of directors earlier this month.

“I have spent my time here with the best Buckham West coworkers that anyone could ask for,” reads the letter. “What a joy this has been. … When my last day arrives and I walk out these doors, I will look back with pride on what we have accomplished.”

In her letter, she gave some examples of the work she’s done as the Buckham West director. She moved the Meals on Wheels program from the hospital into their building. She upgraded much of Fashions on Central — the store is run by the Buckham West leadership. And she helped the most vulnerable population navigate a worldwide pandemic.

The list goes on. Among her proudest accomplishments though, was overseeing the construction of the Buckham West building addition.

It was eight years from the day the board of directors approved the idea to the ribbon cutting. It was a “complicated” project, working with the city and being asked to raise $2 million.

“I didn’t know how to do that,” she said. “We hired a professional firm who helped us, and they laid out everything we needed and why we needed it. … But I didn’t really think I was going to be the one asking for (corporate donations). I thought I’d get coffee or make copies, but no; I was the person.”

They ribbon cutting was held on Dec. 11, 2019. No amount of preparation could’ve prepared them for what came next.

“The building was virtually empty for the whole first year,” Kaiser said. “So, it’s still new, you know? 2022 and we were just coming back.”

Socialization and fitness were largely lost when the building had to be closed. Even the education aspect suffered, since the defensive-driving courses and history presentations that Buckham offers weren’t available.

Now, as 2023 begins, the new Buckham building is ready to start fresh, which Kaiser said seemed like the perfect time for her own fresh start.

“It was nothing you could expect or prepare for,” she said. “It took a lot out of me. It took a lot out of this organization. … People weren’t coming at first, so we didn’t have many activities. Now, we’re starting over with that. You can’t just pick up where you left off.

“You got to start again. I think that’s another part of the reason for me. I’ve done what I can. To think about building it up and taking it the next step — 20 years is all I’ve got. The next person will do that. … They’ll find the right person. It’s the best job I’ve ever had.”

As she gave a tour of the building addition, she said hello to each passerby. She knew them all on a first-name basis. Isabell O’Connor who is on the Buckham West board of directors and recently president of Buckham West’s Board of Directors for six years in December.

“Mona is very organized,” said Isabell O’Connor, who is on the Buckham West board of directors. “She also has a good heart. She also likes to make decisions after asking the group or the board. I think she’s quite energetic. And she’s young.”

One of the three big priorities for Buckham West senior center is fitness. This was the driving factor for their fitness room, which is shared with the Buckham Community Center in exchange for paying the utility bills. (Colton Kemp/southernminn.com)

March 24 will be Kaiser’s last day as director. A retirement party will be held sometime in February.

“Surreal is a pretty good word,” she said. “I can’t believe that it’s actually happening to me. But I’m so ready. I’m just finally really ready. The tears are like right on the edge all the time.”

She’ll spend her first few months of retirement on call for jury duty. Her ultimate goal for retirement is to “age gracefully.”

“We talk about it a lot around here, about examples of people who age gracefully,” she said. “There are people who have this wonderful presence around them. They’re so thankful for the life they had and that people are there to help them. And they’re just loving as they get older. I can think of a handful people right now.”

“But you can go the other way too. They stay home. They’re mad and cranky, you know? That stereotypical cranky person. So, aging gracefully is a goal for me. I think I have the role models and knowledge that I can (age gracefully). That’s what I’m striving for.”

To reach her goal, once her jury duty is over, she and her husband will be headed to the cabin with their new kayak, ready to hit the lake.

UPDATE: This event has been postponed until Feb. 11 due to the cold temperatures forecasted on Sunday.

The Cardboard Classic is returning to Medford.

The second annual cardboard sled race will close out the month on Jan. 29 at Straight River Park. The Medford Cardboard Classic is hosted by the Medford Civic Center. The event promotes creativity and excitement as participants are expected to craft their own snow sleds from cardboard. 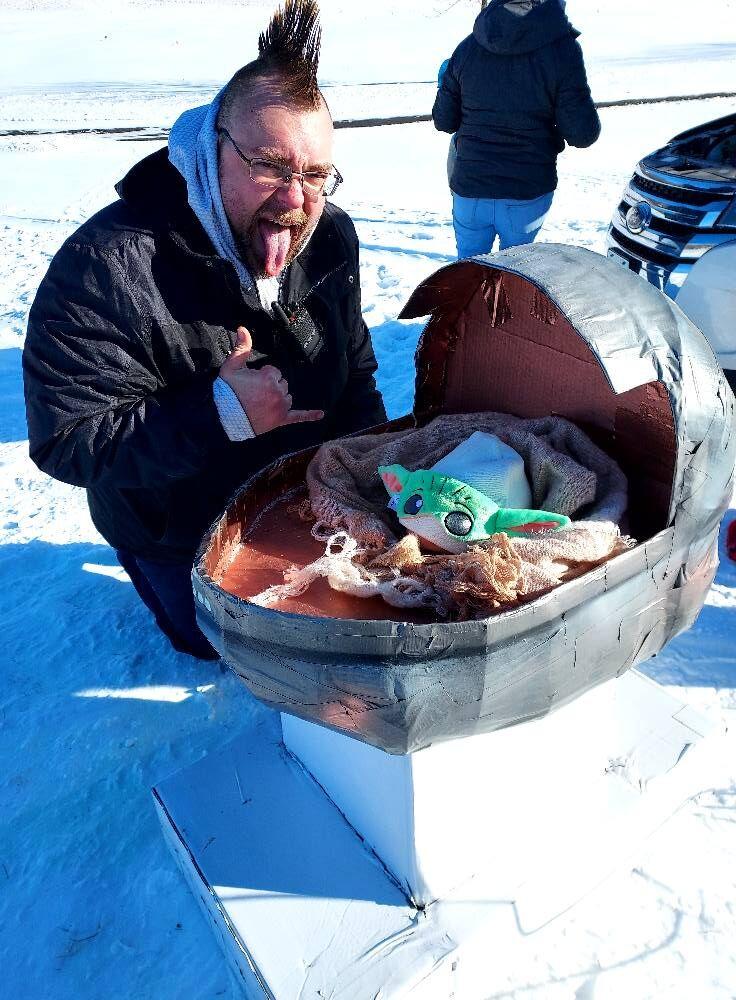 The idea for the Medford Cardboard Classic, started two years ago, not as a winter activity, but a summer one.

“We were gonna do a cardboard boat race,” said organizer Elyse Miller. “But that was the COVID-19 year so everything got screwed up. Then I saw Owatonna and Faribault were doing boat races as well. I stumbled across a cardboard sled race, so we said let’s do ours in the winter instead of trying to compete with other towns.” 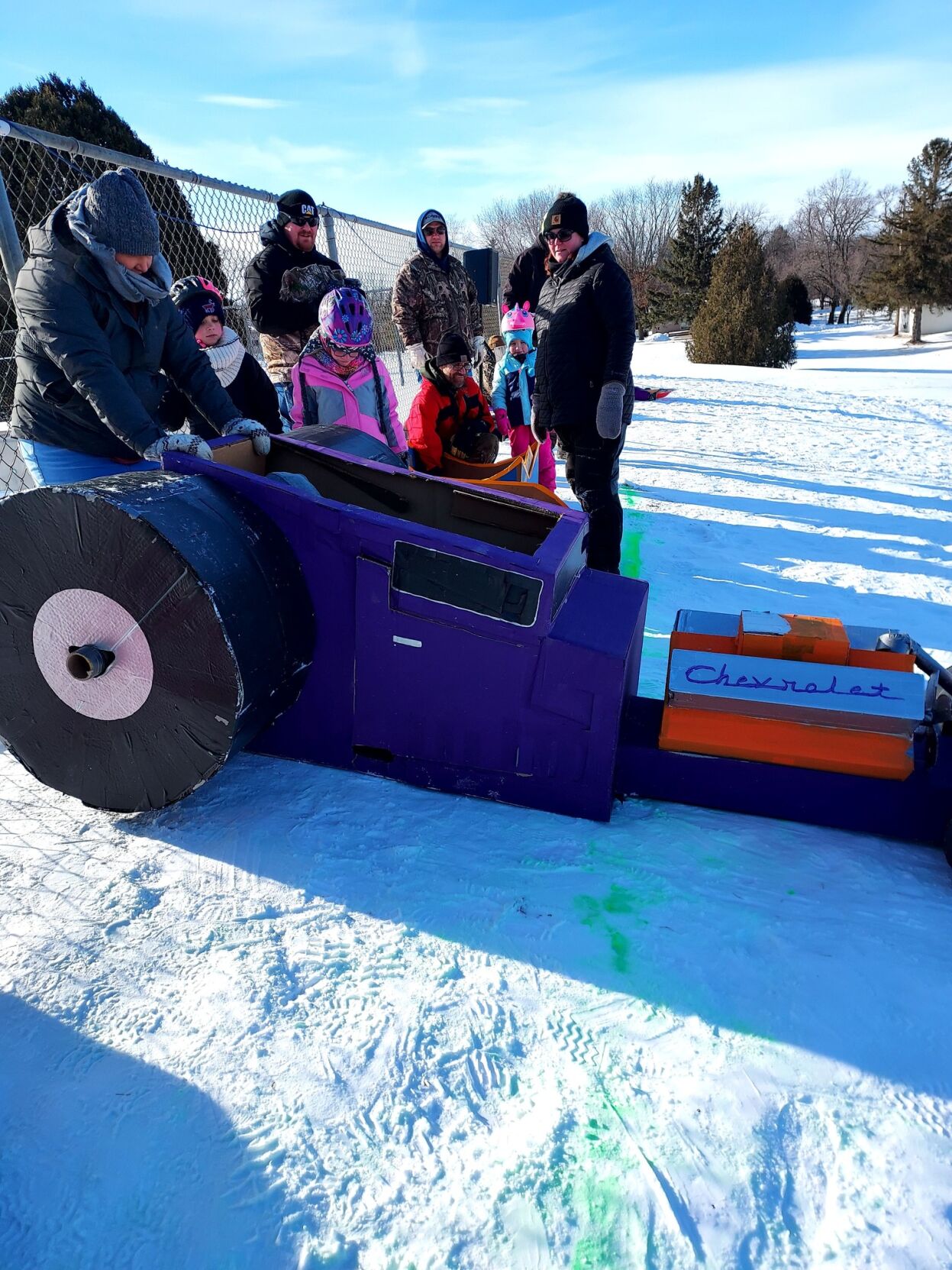 A hot rod sled made of cardboard was ready to speed down the hill in the 2021 Cardboard Classic. (Photo courtesy of Medford Civic Center)

The sled races were a hit last year with Medford Civic Club families and friends. This year, club leaders hope to see new faces on the snowy slopes for the second annual race on Sunday.

“We’re trying to get the word out there for more people,” Miller said. “It’s kinda cool to see a wide range of the community coming together, enjoying a nice afternoon on the hill.”

Races are divided up by different class requisites based on age. Kids aged 10 and under can participate in Class 1, with the oldest participants, 18 and older, participating in Class 4. Each sled’s class will be determined by the oldest member on each team.

Competitive speed races will be judged by brackets with racers going two at a time. Participants will get another chance to race at the conclusion of the bracket with a free-for-all in which every racer in their respective bracket races at the same time. 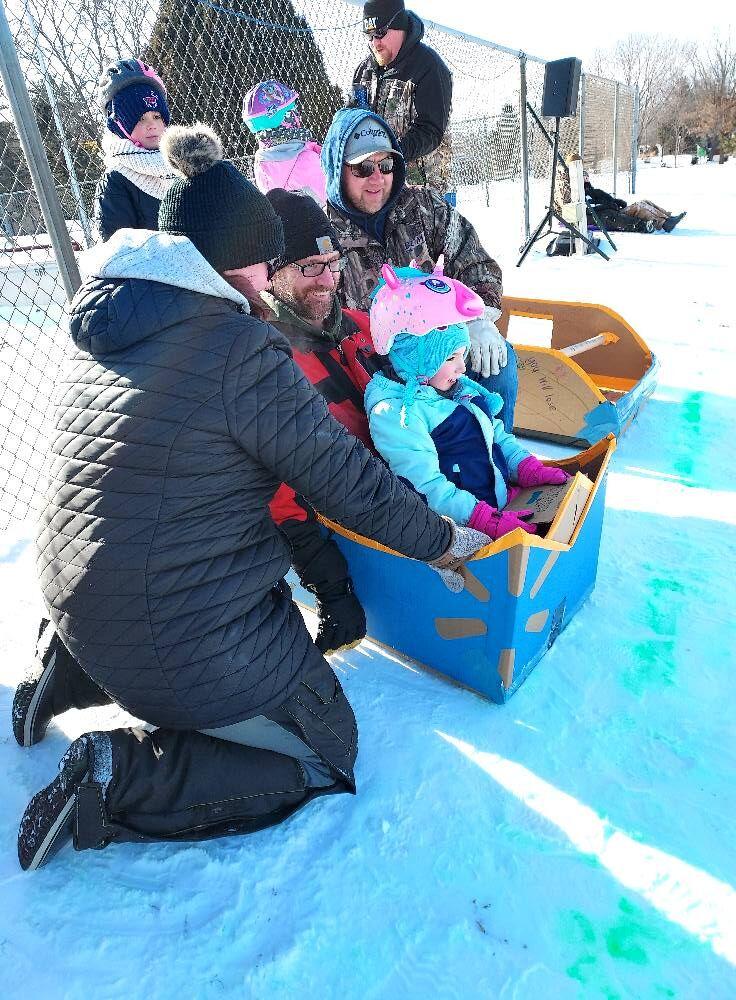 A family gathers around two riders in one sled before last year’s inaugural race. (Photo courtesy of Medford Civic Center)

The sled teams are expected to craft their sleds from only cardboard, tape and glue.

While the idea of crafting a sled from cardboard seems simple enough, the rules and regulations for each sled are strict and could result in two inspections.

Each sled cannot have sharp edges, pointy objects, or any other object deemed to be dangerous. Reinforced cardboard, staples and nails are among the other materials that are not allowed.

Safety is a priority for the Cardboard Classic, meaning helmets are required for every racer. Bike helmets are acceptable.

“It’s a great time,” Miller said. “You’re spending an afternoon sledding with other people. It’s a fun afternoon for all ages. My brother-in-law, who’s 40, was having a blast last year. I think he was having more fun than the kids sometimes.”

Participants need to be on site by 11:45 a.m., when the best design contest will be judged.

Class 1 begins racing at noon. Subsequent classes will follow at indeterminate times based on the conclusion of the previous class race. Registration begins at 11:30 a.m. 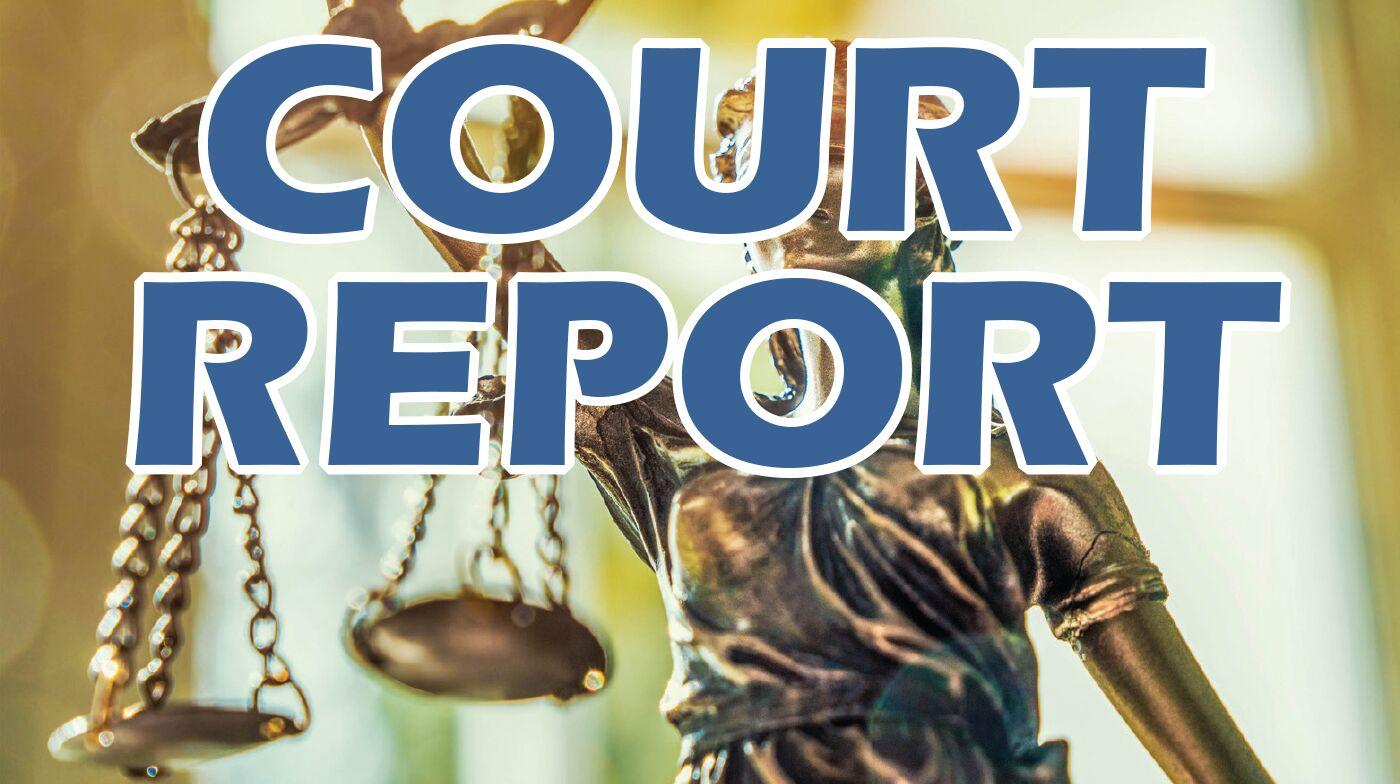