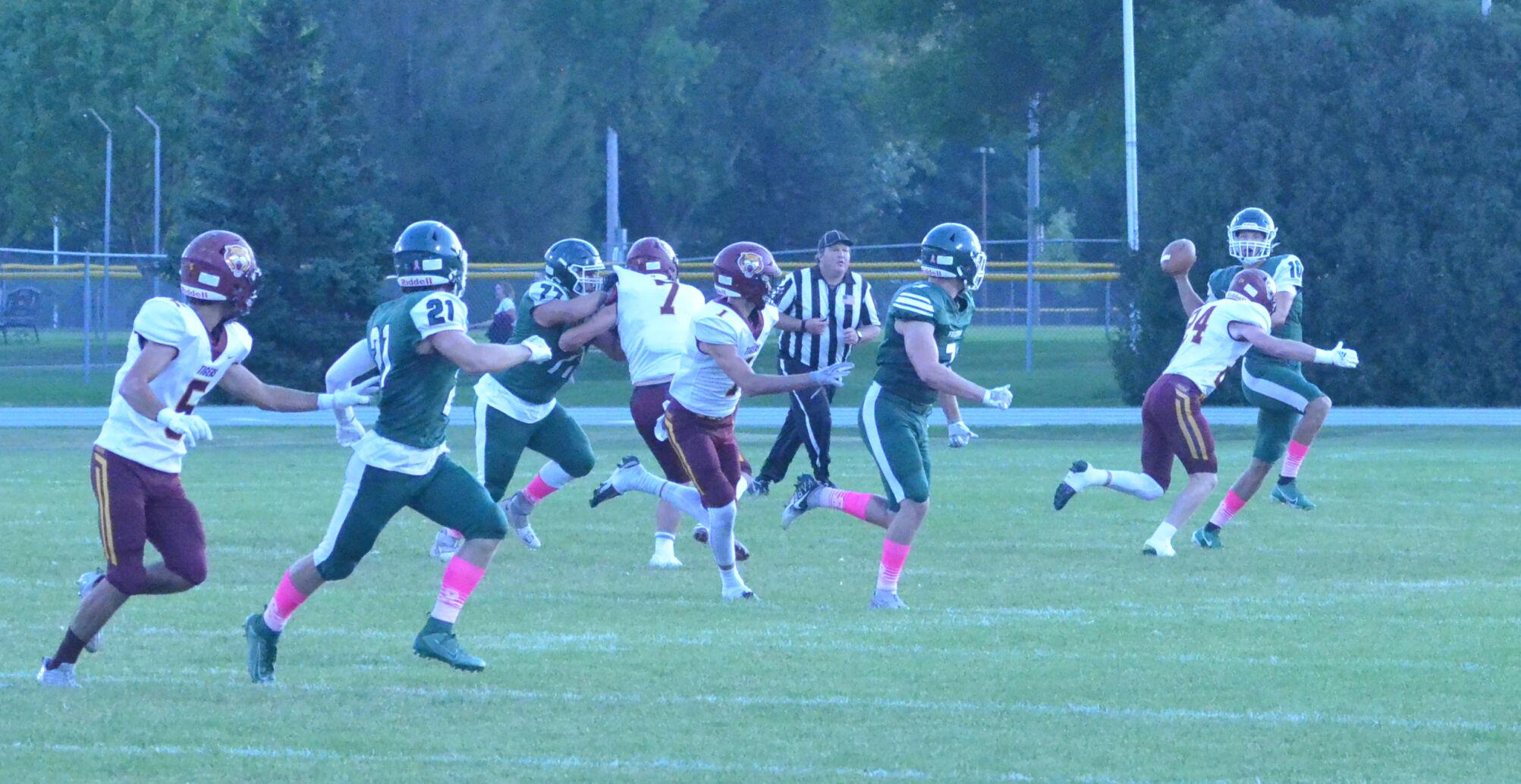 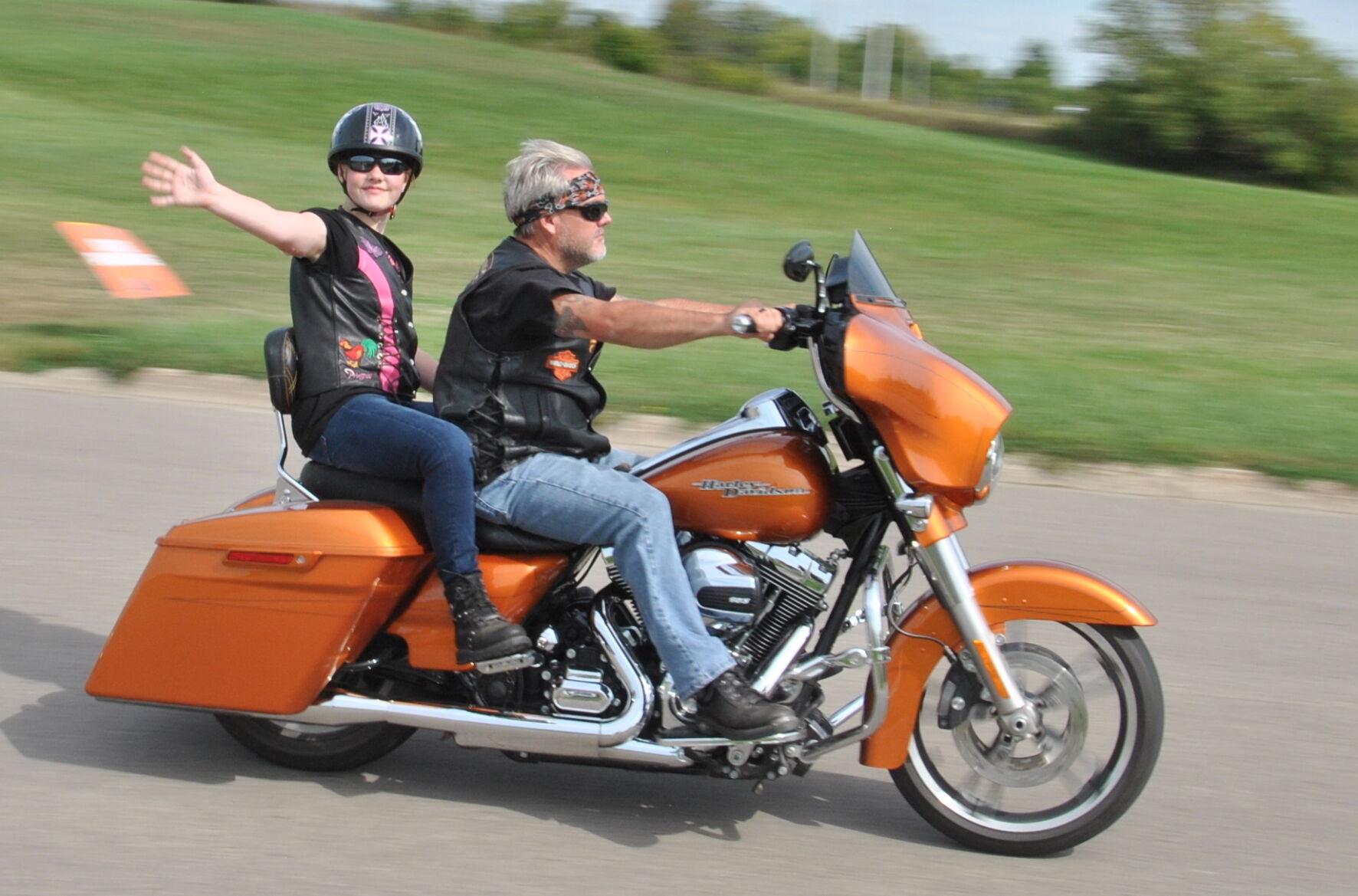 A woman on the back of an orange Harley waves to the camera, while the silver-haired driver keeps his eyes on the road. (Colton Kemp/southernminn.com)

hi my mans is cool.JPG 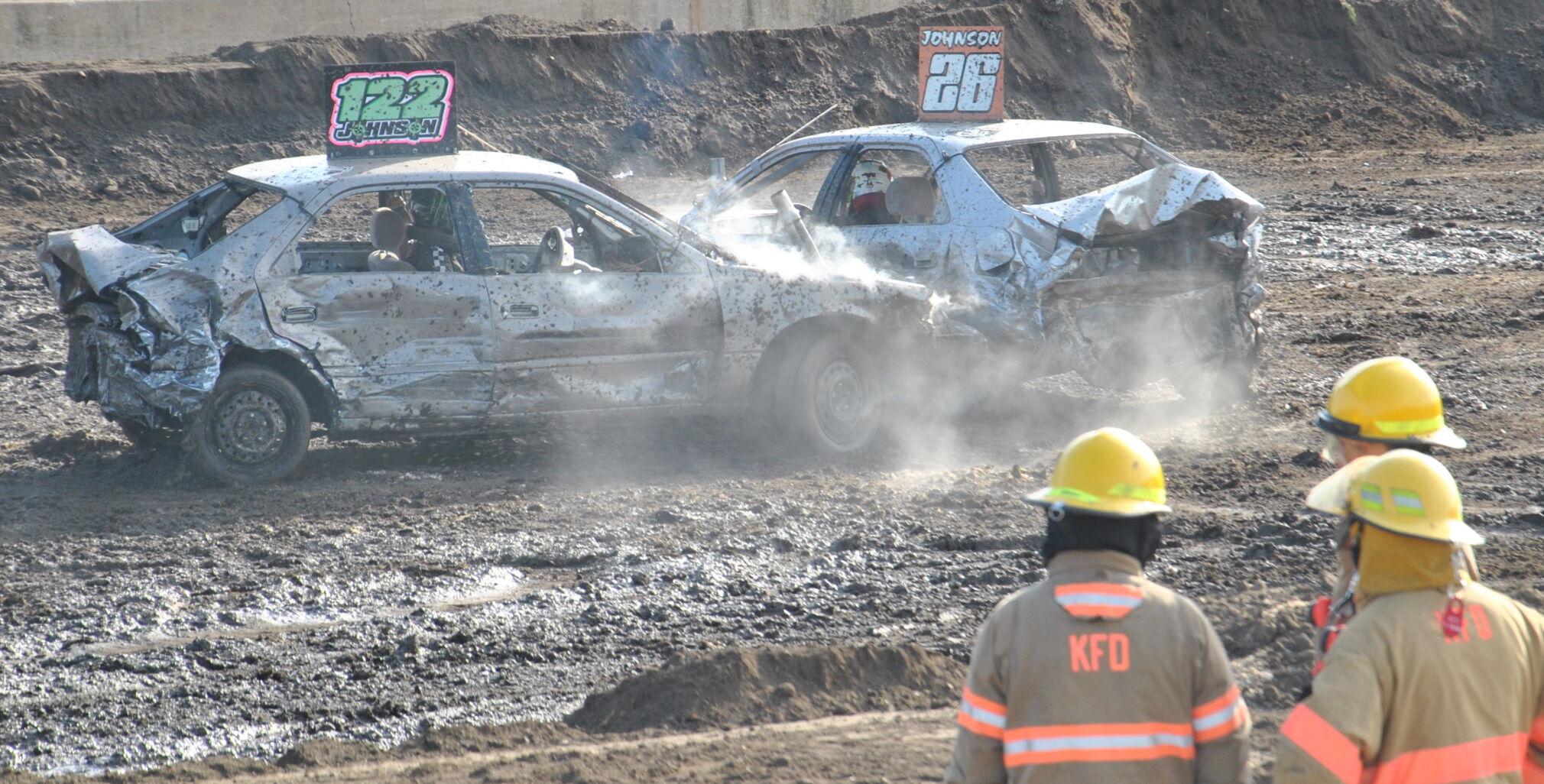 Firemen watch carefully as the Johnson brothers go head-to-head in a battle for first prize in their vehicle class. 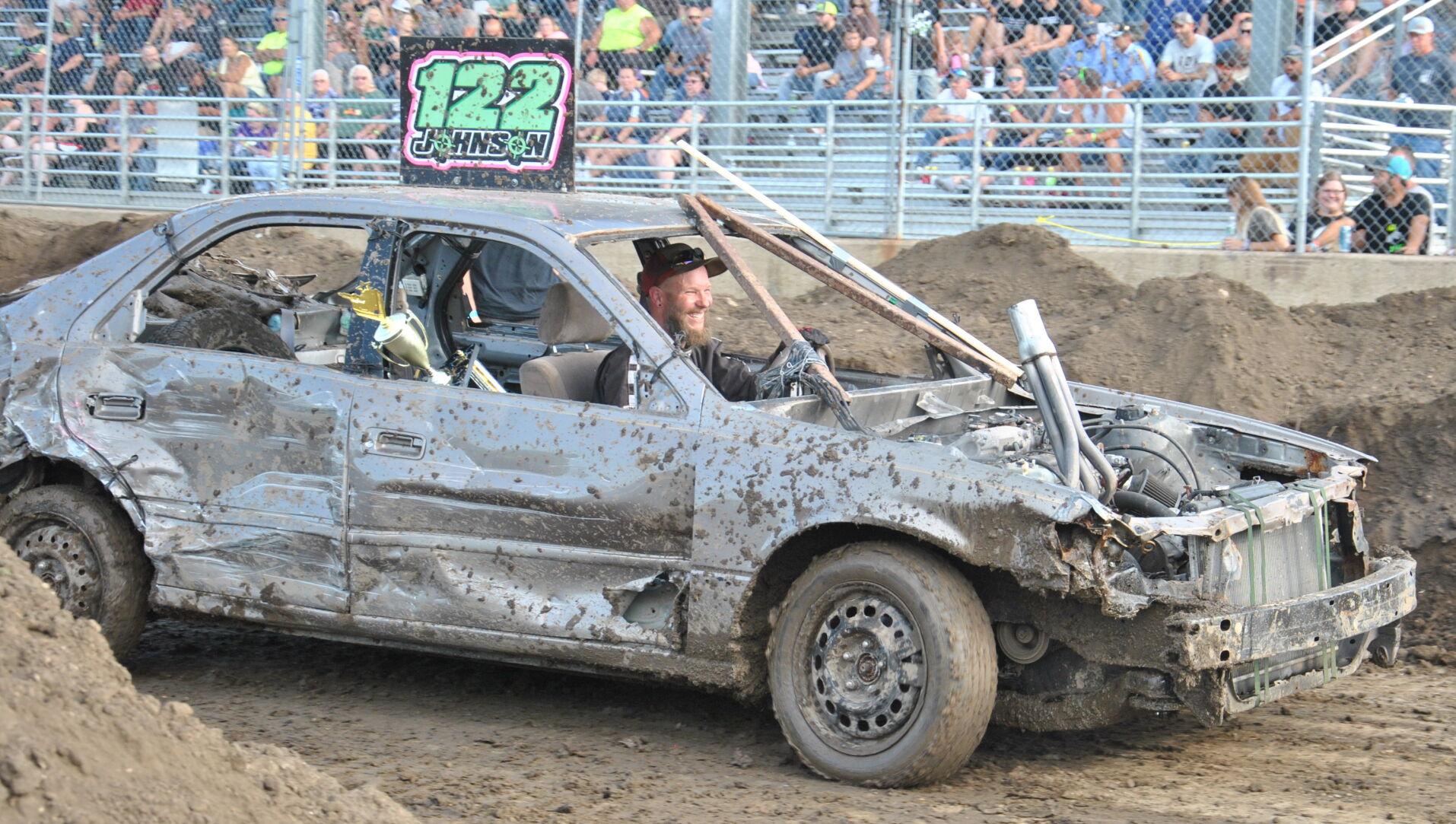 Smiling ear-to-ear, Jake Johnson drives his car out of the competition area. In the passenger seat, his first-place trophy leans out the window. (Colton Kemp/southernminn.com)

Stars, stripes, mud, beer, cars and tomfoolery characterized the demolition derby that took place at the Rice County Fairgrounds on Saturday. Several hundred people filled the stands to see a few dozen cars get beat up. 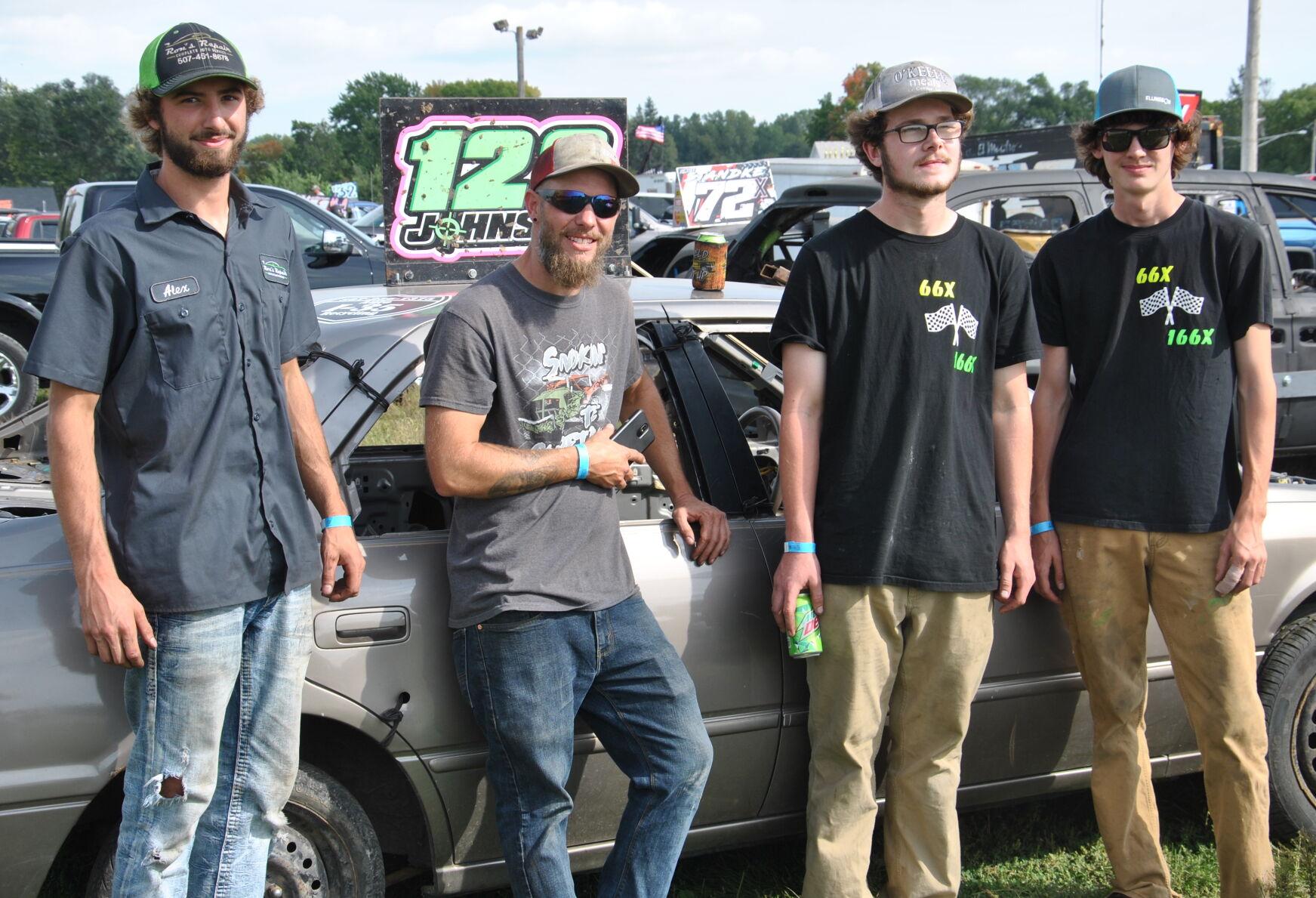 From left, Alex Stemzel, Jake Johnson, Brayden Nappin and Tanner Wright stand in front of Johnson’s car before bringing it into the derby to be destroyed. (Colton Kemp/southernminn.com)

According to prize-winning driver Jake Johnson, derbies are a, “redneck paradise with [hillbillies] ready to get in there and knock each other’s doors off with a smile on their face.”

Before Johnson got behind the wheel, the sea of attendees filed into the bleachers with the brats and beer they bought from the food trucks outside. Under a shaded area, a table was set up with RC (remote-controlled) cars smashing each other.

The handcrafted miniature demolition derby table had about 10 cars, each operated by their owner’s controls. The cars started out in decent shape but certainly didn’t stay that way. 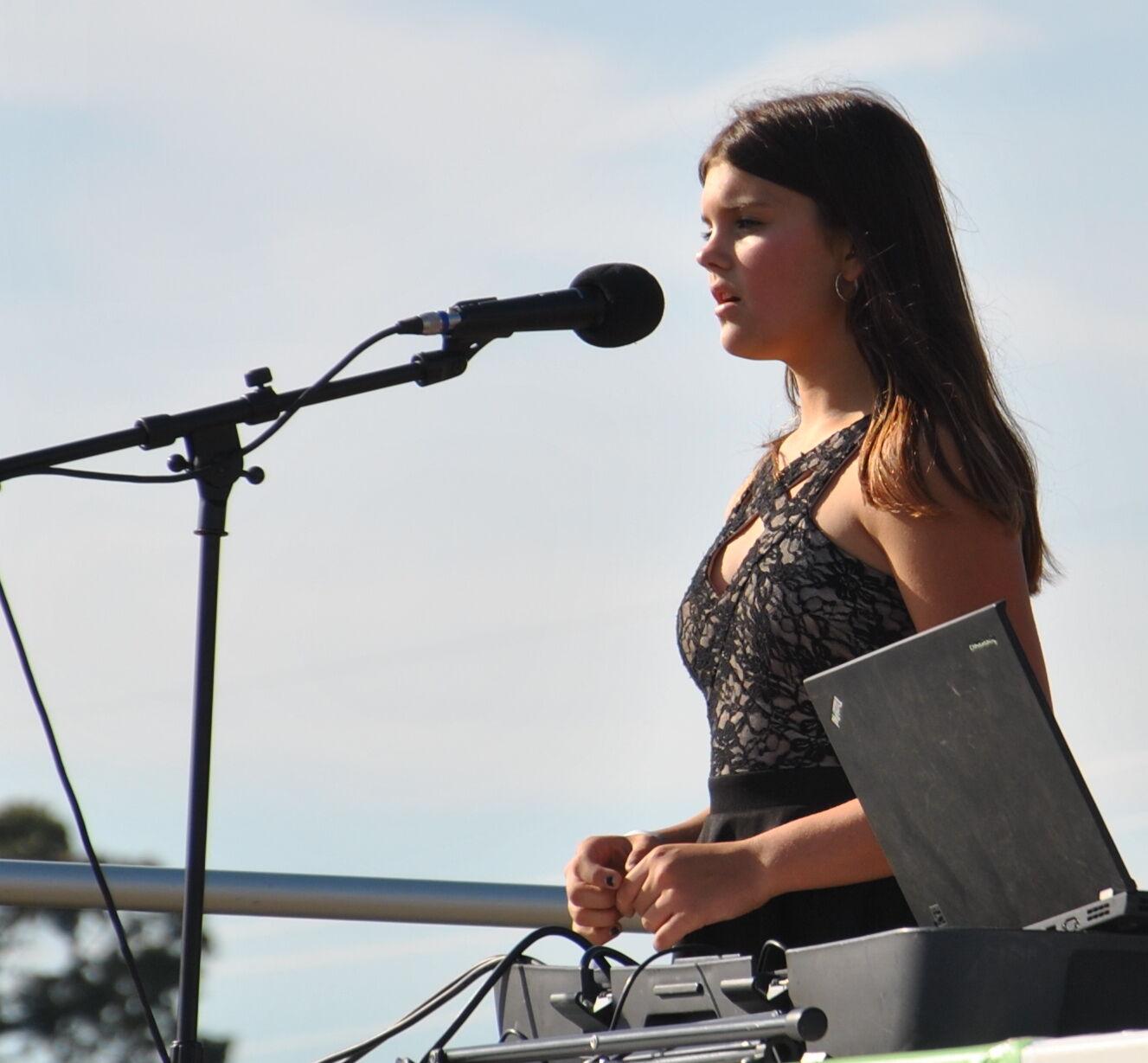 Justice Moots, 13, of Faribault, had a hard time controlling her shakiness as she sings the Star-Spangled Banner to a crowd of several hundred people.

Once the crowd had filled the grandstands, and the main events were set to begin, members of the American Legion Color Guard raised the American flag. As it reached the top of the flagpole, 13-year-old Justice Moots began to sing “The Star-Spangled Banner” to kick off the derby.

“I was so nervous,” said Moots, just before her mom reassured her. “I couldn’t stop shaking. At one point, I thought I forgot the words or messed them up, so I kept looking at my mom to see how I was doing.” 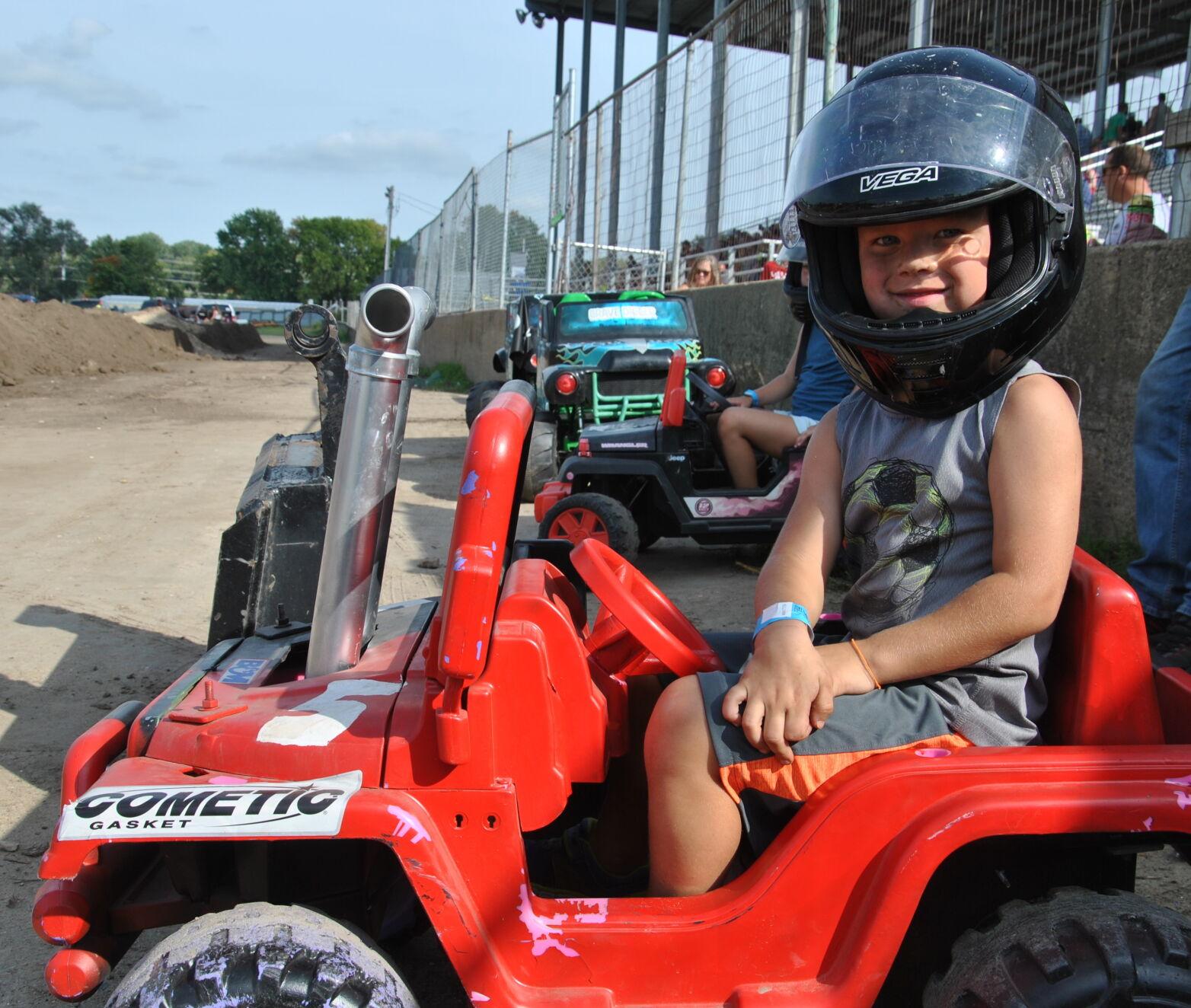 Corbin Nelson, 5, of Faribault, prepares for his Power Wheels demolition derby on Saturday. His dad drove in derbies, which inspired Nelson to give it a try.

After the opening ceremony, it was time for the first event: the Power Wheels Derby. Among the participants was 5-year-old Corbin Nelson in a red Power-Wheels Jeep, which are some of his favorite cars. Nelson’s dad was into demolition derbies and drove in them very often, which is why he wanted to get out there.

Ironically, this is the same reason that Jake and Logan Johnson began to drive in demolition derbies. They’re now competing in the adult contests.

“Our old man wrenched down vehicles himself,” said Logan, referring to the prep work that goes into a derby car.

“Yeah, he did a derby a couple times,” said Logan’s brother, Jake.

“We started off doing Enduro (racing),” said Logan. “Then, we ended up going to smash and crash. But, yeah, it all kinda started when we were little.”

The Johnson brothers have some experience in demolition derbies, even bringing home the gold a few times. When they go out hunting for cars, things can get a bit hairy, they said.

“We get ‘em off Facebook Marketplace sometimes,” said Jake. “Or we’ll see ‘em in someone’s driveway, go knock on the door and see if that old rust bucket’s for sale. They usually sell it pretty easily, because they don’t wanna look at it anymore. That or they’ll point a gun at us and tell us to [go].”

For their vehicle class, Jake said they can usually get the cars for a few hundred bucks. For some of the higher-up classes, though, the price can get into the thousands. 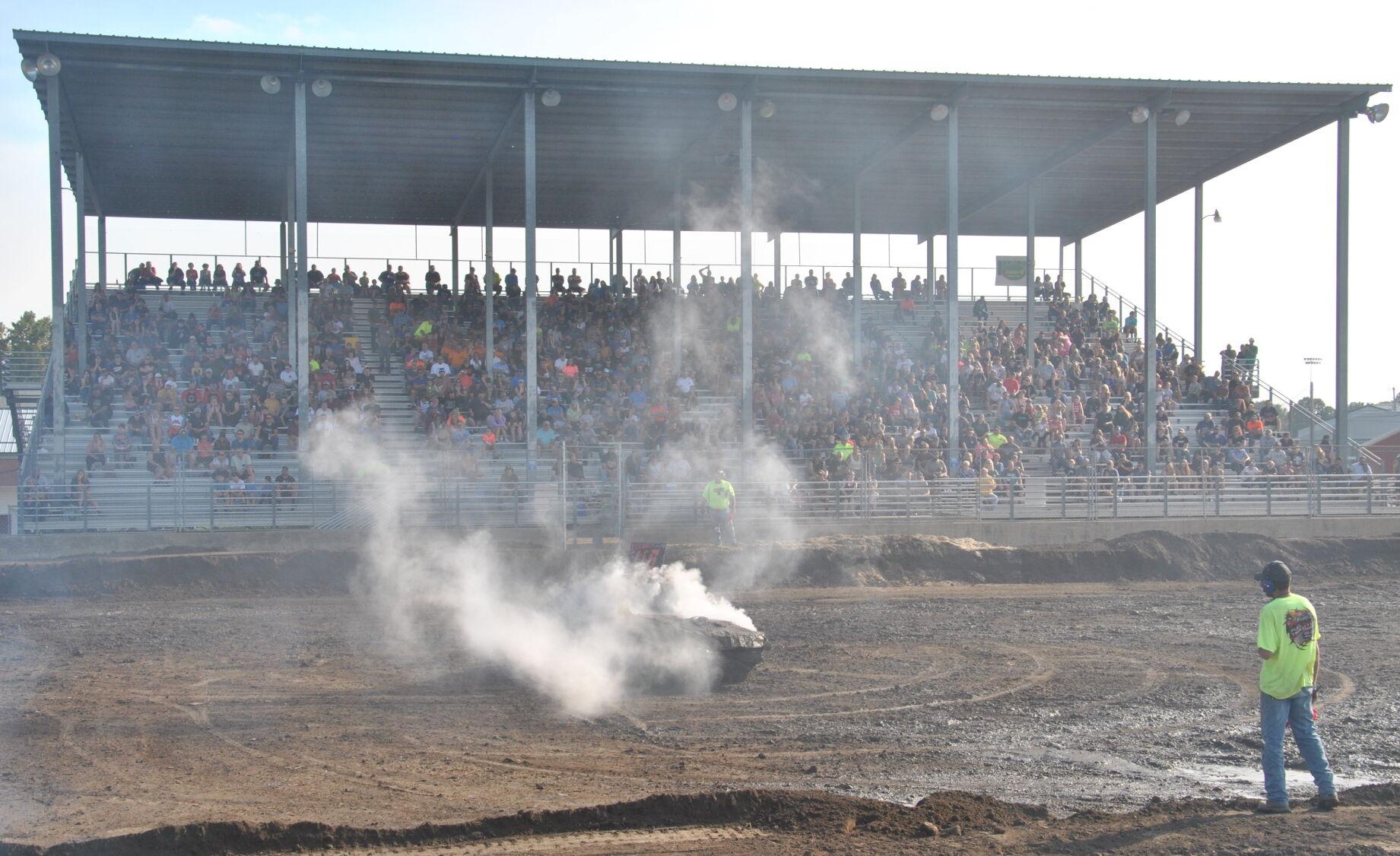 The first car to be eliminated is difficult for the crowd to see through the cloud of smoke pouring from its failing engine. (Colton Kemp/southernminn.com)

Even though Jake’s an experienced driver, he can still get a little nervous.

“It can get nerve racking,” he said. “I guess, when you get a lot of people or a lot of good guys out there, it’s killer. I seen lots of types of derbies: buses, combines, even motorcycles … I wouldn’t do that; I like having legs too much.”

After the Power Wheels Derby, the Johnson brothers lined up with the other competitors in their class. When the countdown finished, they slammed on the gas.

For most of the derby, the Johnsons weren’t slamming into cars, front-first. They typically hit the other cars in reverse, to preserve the motor as best they could.

Before the other cars were eliminated, the Johnsons weren’t taking it easy on one another. Jake gets thrown up the sidewall of the arena by his brother, Logan Johnson. (Colton Kemp photos/southernminn.com)

As the derby went on, cars began to drop out of the running for the trophy. The now-destroyed cars were hard to spot inside the white smoke pouring from their engines, until the drivers eventually were eliminated.

One final blow is given to Logan Johnson’s passenger side, putting him out of commission and making Jake Johnson the winner of their vehicle class. (Colton Kemp/southernminn.com)

When it got down to the final two participants, it was Johnson versus Johnson to take the crown. After several hits and even more spinouts, Logan Johnson was eliminated by brother Jake.

After the officials handed Jake his trophy, he set it in his passenger seat and drove out of the competition area with a smile stretching across his face. 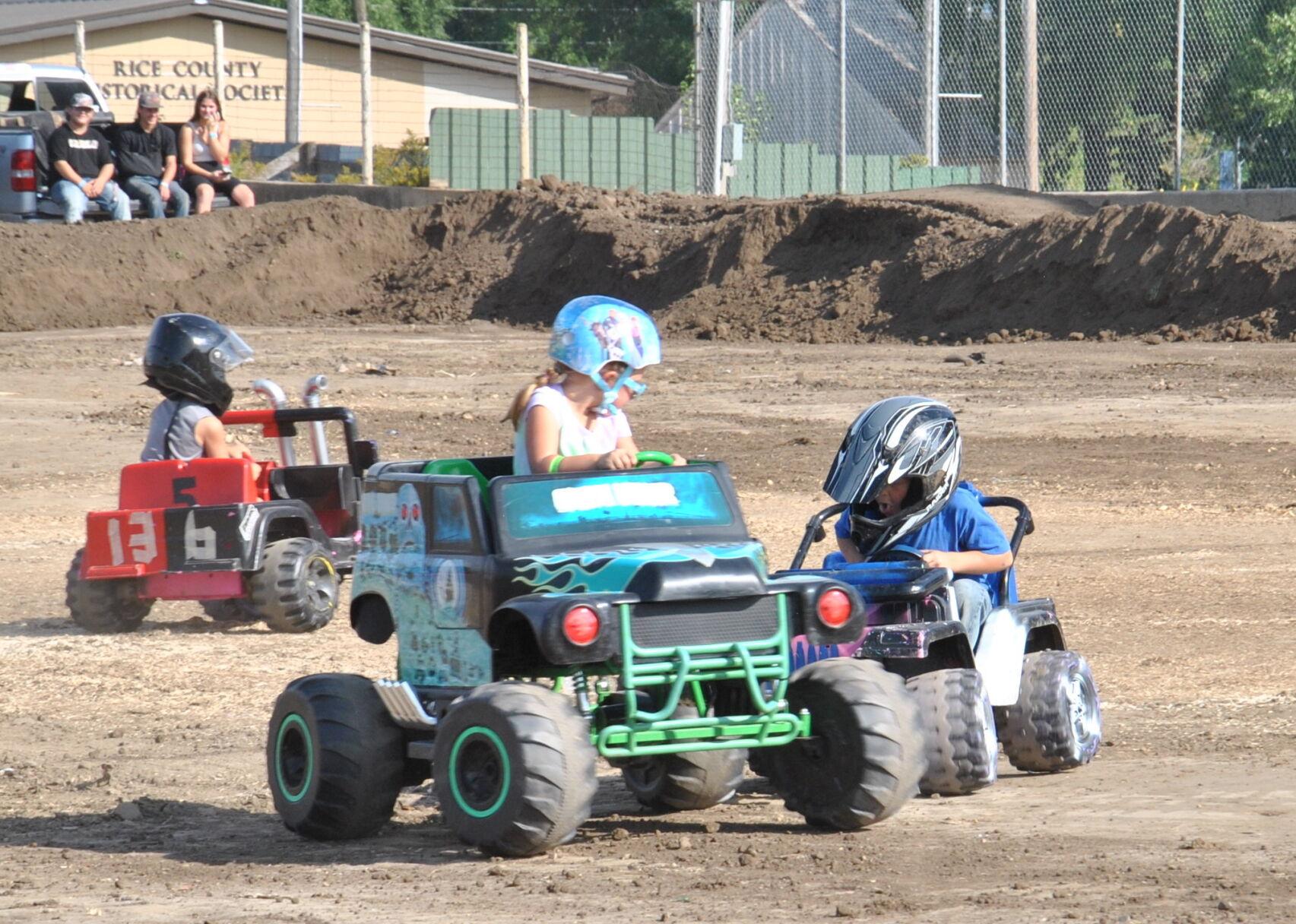 As Corbin Nelson, 5, of Faribault, spins back around, two other participants in the Power Wheels derby go at it. 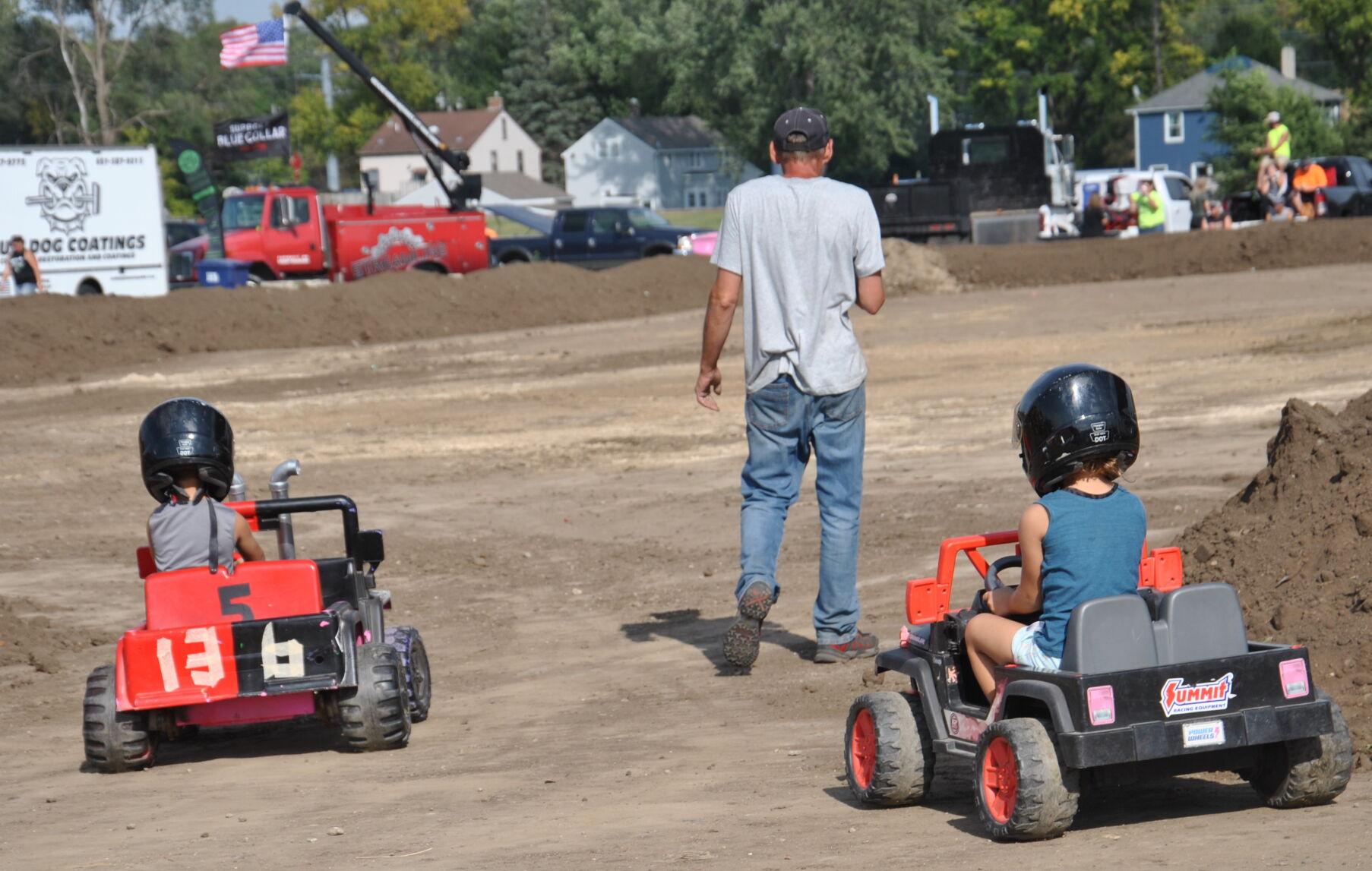 Corbin Nelson, 5, of Faribault, enters the arena with his friend by his side. (Colton Kemp/southernminn.com)

Before the main events, attendees are able to watch RC (remote-controlled) cars get wrecked in their own mini-derby. (Colton Kemp/southernminn.com) 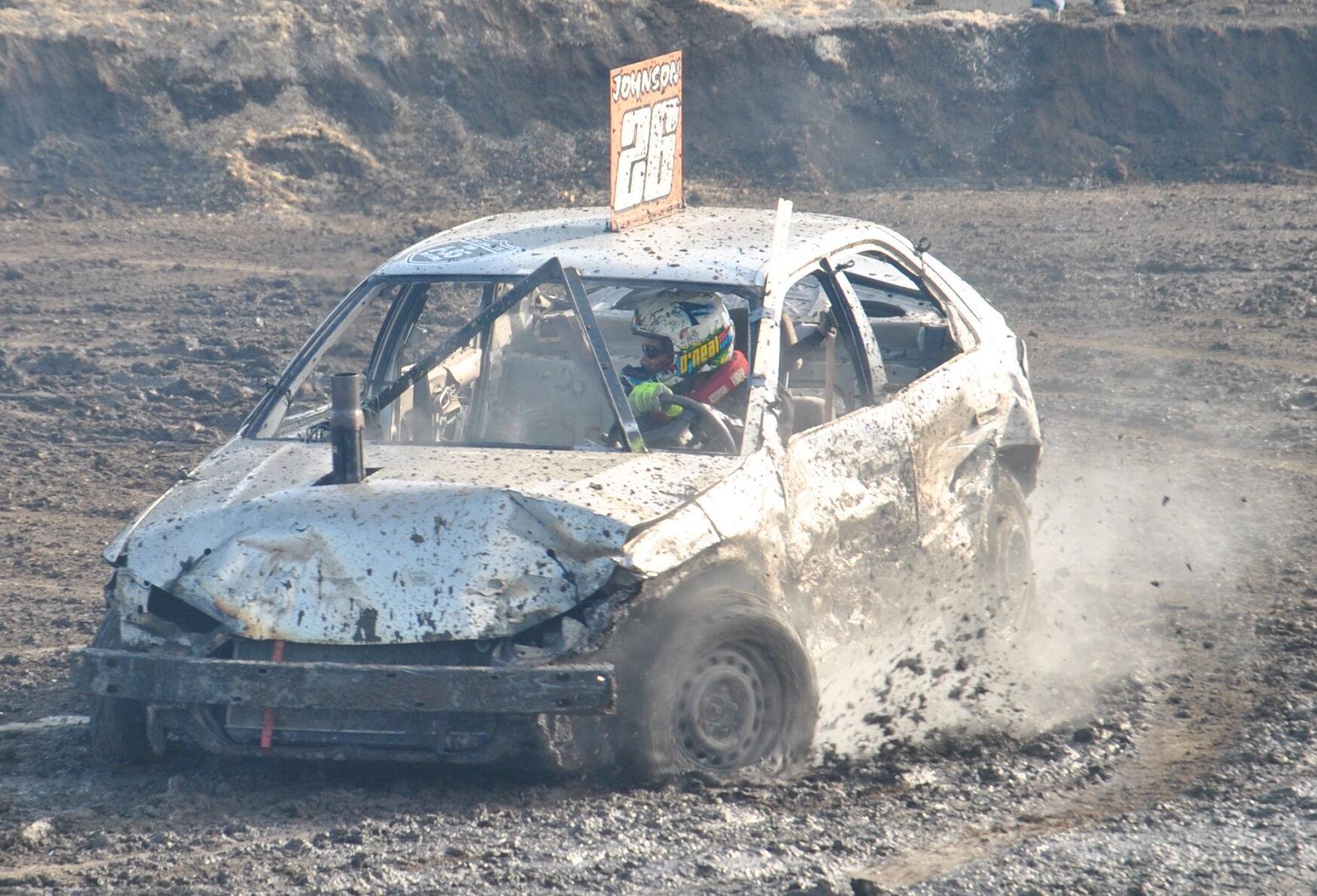 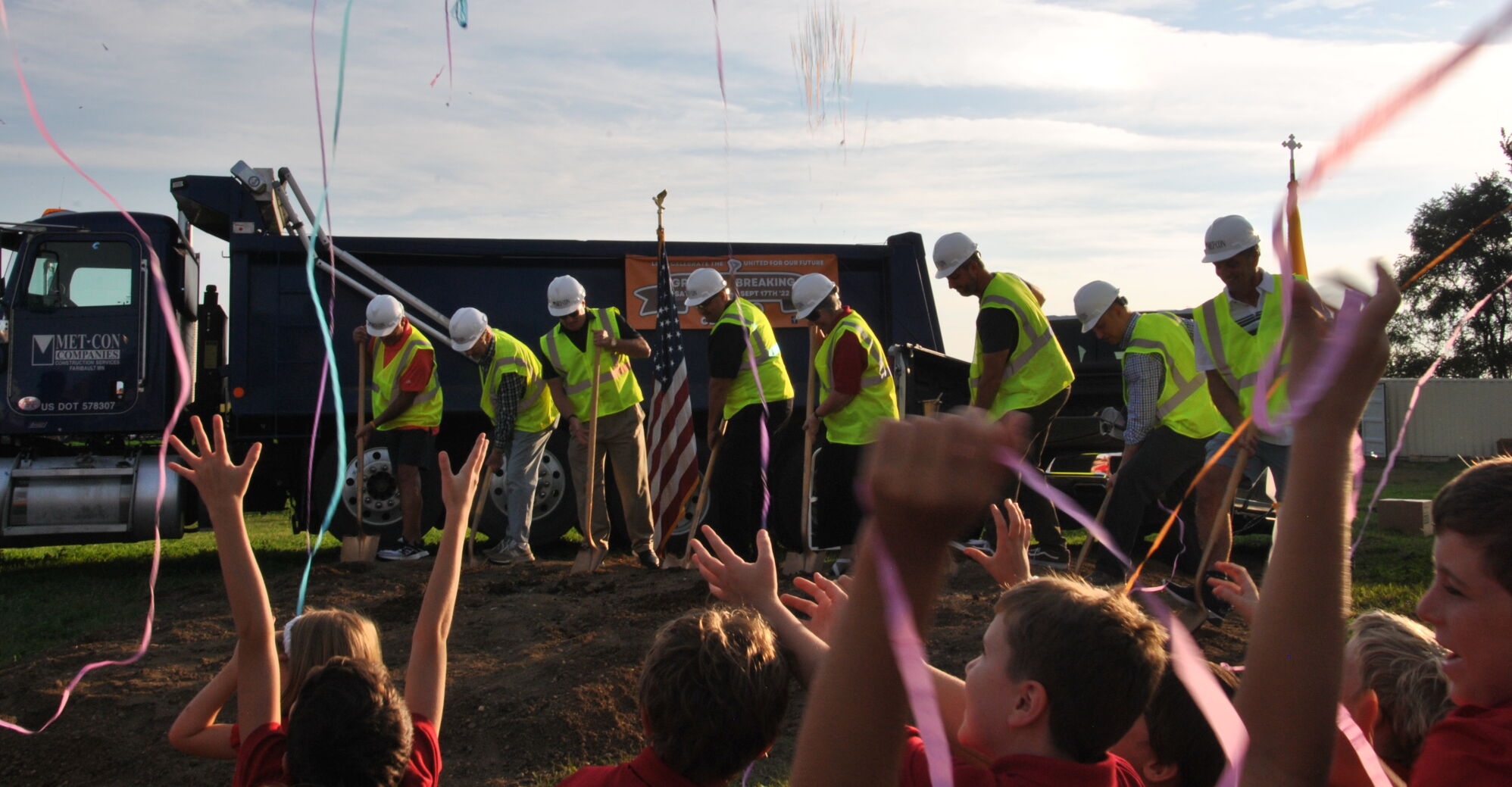 As the shovels were readied, the crown counted down: “Three. Two. One. Dig,” and suddenly a series of confetti cannons go off, sending streams of colorful paper floating gently onto the crowd. (Colton Kemp/southernminn.com)

A Faribault man in his 20s was reportedly shot Saturday evening at a park in town after a drug deal went wrong.

At 5:29 p.m. Saturday, Sept. 18, Faribault officers were dispatched to a shooting at Teepee Tonka Park on Third Avenue NE. While en route to the scene, an involved party contacted dispatch, indicated a victim had been shot with a shotgun, and they were transporting the victim to Allina Health Faribault Medical Center. Officers responded to both the park and hospital.

At the hospital, officers encountered a 23-year old Faribault male who was suffering from a shotgun wound to the upper chest and shoulder. The victim provided limited information to officers, according to a release from the Faribault Police Department, but he indicated the shooting occurred during a botched drug transaction.

Due to the nature of the victim’s injuries, he was stabilized at Allina Health and airlifted to Hennepin County Medical Center for surgery.

Officers at Teepee Tonka Park located evidence of a shooting scene and encountered other involved parties, including a vehicle that had been struck by gunfire. Two involved vehicles were impounded as evidence, and both a shotgun and handgun were recovered. Recovery of the involved firearms led to the arrest of Dorian Steven Hutchens, 26, of New Richland, for being an ineligible person in possession.

Faribault Police Chief John Sherwin said he expects more individuals to be arrested and/or charged in the coming days.

The investigation into what led up to the shooting is ongoing. Assault and other charges are currently pending further investigation, the release said. At last report, the shooting victim remains hospitalized in stable condition.

“Some of our detectives were writing warrants (Monday) and hoping to speak with all the involved parties, including the individual that was shot,” Sherwin said. “We cannot paint a full picture of exactly what happened, but we anticipate more people to be charged. At this point, we believe we know the primary individuals that were involved.”

“It was somewhat complicated by having several different scenes with an involved victim transporting himself to the hospital,” he said. “And then we had a wide scene at the park itself, and we located several vehicles involved, and there were several firearms located with this. The officers did a good job with the resources available to manage all those locations and respond to the incident.”

While vehicles were found in and around the scene, investigators do not currently believe it was a drive-by incident.

“It wasn’t like one vehicle drove by and fired shots or anything like that,” Sherwin said. “Indications are that a drug transaction went bad, and there was a physical struggle, and that’s when a shooting took place.”

Sherwin did not believe there was any danger to the public at this time.