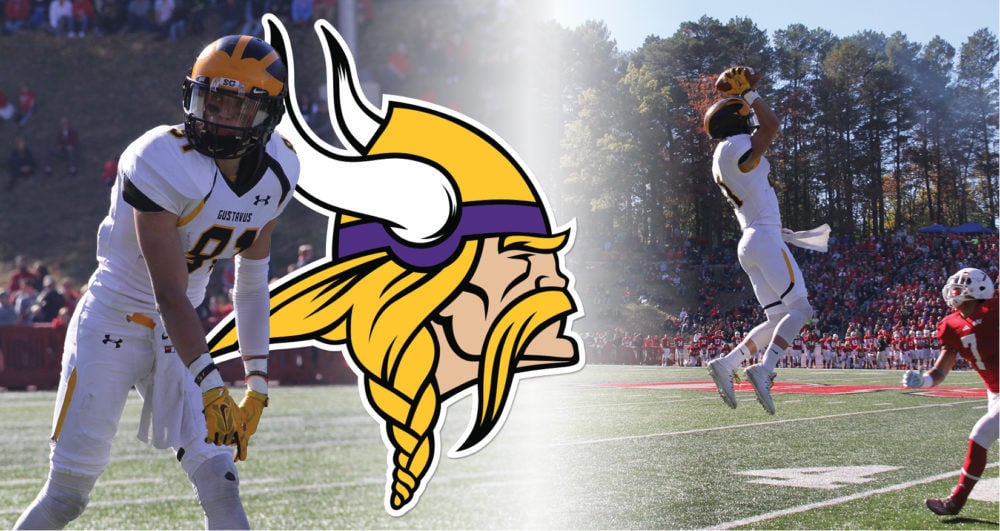 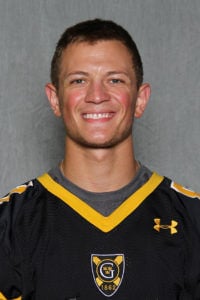 Gustavus’s two-time All America wide receiver Matthew Boyce (Sr., Excelsior) is turning his dreams into reality. Boyce hasn’t let anything stand in his way since coming to Gustavus after playing in just five football games his senior year at Minnetonka High School. In fact, he was highly recruited as a lacrosse player and his football career seemed to be a second option coming out of high school.

Fast-forward to today and Boyce holds Gustavus single season records for yards (1,318), touchdowns (17), and 100-plus-yard games (9). After four seasons wearing the winged helmet, Boyce finished his career as the program leader in receiving yards (3,295) and touchdowns (35). And to top it all off, today it was publicly announced that Boyce has been invited to the Minnesota Vikings rookie camp, which begins Thursday at Winter Park.

“We are very excited for Matthew,” Gustavus Head Coach Peter Haugen said. “He has worked hard and we are thankful he has been given this great opportunity.

“His skill sets and big time play making ability were evident on the field, but his preparation and understanding of the game were what set him apart. Those attributes will be a huge asset as he takes on this new challenge.”

Since the Gustavus football season ended last November, Boyce has been training hard to continue his football career. He participated in the University of Minnesota’s pro day last month and now has the opportunity to showcase his talents at the highest level as a member of a division champion and playoff caliber team.

“Words cannot describe how much this means to my family and me,” Boyce said. “I have the most supportive family, friends, and classmates, and I couldn’t thank them enough for encouraging me, praying for me, and for supporting me. I have been waking up at 5:00 a.m. the past couple months to drive to the gym and unsure if I would get an opportunity to show a team what I could do. I believe God has a plan for my life and I will continue to trust in Him. Going into camp I will have the mindset that I have always had, I am going to outwork everybody, make plays, and pray that God uses me in anyway He chooses. My favorite verse is Philippians 4:13 and it gives me confidence going into camp and reminds me that I can do all things through Christ who gives me strength!”

Boyce is not alone when it comes to MIAC football standouts making it to the highest level. Receiver Brandon Zylstra of Concordia has also been invited to Vikings rookie camp, and former Cobber quarterback Griffin Neal signed a contract with the New Orleans Saints. St. Thomas tight end Charlie Dowdle signed a free agent deal today with the Chicago Bears.

Boyce is the first Gustavus football player to join an NFL team since left tackle Jack Breckner ’10 signed an undrafted free agent contract with the Indianapolis Colts in 2014. Boyce is the second Gustavus receiver to join the Vikings as Ryan Hoag ’04 did so in 2005 and 2006 as a member of the practice squad. Hoag was originally drafted in the seventh round of the 2003 NFL Draft by the Oakland Raiders.